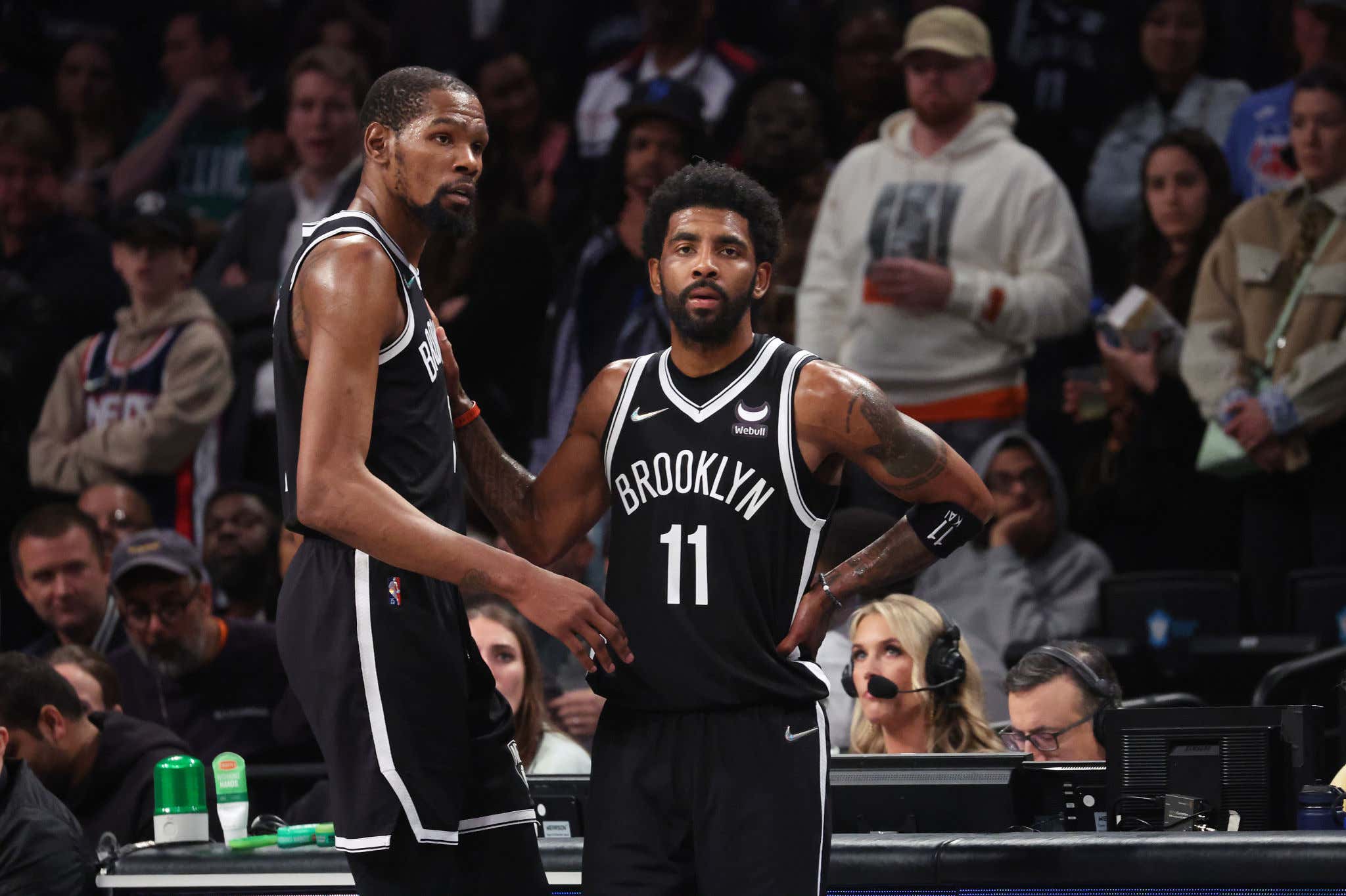 (Source) - Irving has played just half the possible games since arriving on a max deal in 2019, missing 123 of 226 regular-season tilts. That’s led to reports and speculation about the Nets either refusing to sign him long term or dealing him, with The Athletic disputing a rumored deal to the Lakers for Russell Westbrook.

But Irving is still not only close friends with Kevin Durant, but maintains a good relationship with team owners Joe and Clara Wu Tsai. The Post reported last month that a return to Brooklyn appeared a fait accompli, and sentiment around the league is Irving will re-sign.

“I agree most [likely] he comes back,” a league-source well-versed in the salary cap told The Post. “As for a contract, I’d probably try to get him back at an annual rate at what he is currently making. They could give him a contract below the max with unlikely incentives that allows him to reach the max. Unlikely incentives are capped at 15 percent of a player’s salary in a given year. So they can make his salary 15 percent less than the max, then give incentives to allow him to get the full max.

OK, hand up. I'm addicted to this story. I can't help it. When you're just trying to make it in between NBA Finals games, you'll take whatever you can get and Kyrie drama always delivers. The whole debacle is just so fascinating to me. Last October, the Nets put their foot down and declared that Kyrie wouldn't play until he could be a full time participant. They were celebrated for having a stance. They then immediately went back on everything they said as soon as the Nets started to make a little run. That was very funny. All that conviction from earlier in the year was clearly bullshit PR.

Then the playoff hit and the Nets fail to win a game. Kyrie didn't exactly have himself a great playoff series (shocker!) and the discussion quickly moved to his pending free agency should he turn down his player option. A little less than a month ago, their GM didn't seem all that thrilled with the idea of staying in the Kyrie business

That's all fine and good, but Kyrie still has this team by the balls. They invested everything in the Kyrie/KD pairing. They made a deal with the devil in hopes of winning a title. You have to actually make a Finals to win a title I'll remind you, something this era of Nets basketball has not done at any point.

and yet here we are on June 7th and now the word is "well actually, we do want Kyrie back!" I'm not sure this all adds up given what we've been told since their season ended, so this tells me that KD probably made a phone call and told the Nets to stop fucking around. Again, Kyrie holds all the power in this situation at the moment. That's the advantage of a player option and why players negotiate that option in their extensions. If things are great, you turn it down and then sign on the dotted line for a shit ton of money. If things are maybe not so great and the team is reluctant to give you what you want, you have all the leverage. The Nets don'thave the cash or the resources to replace Kyrie's talent level and I'm pretty sure he knows it. If you are I know it, he definitely knows it. The Nets could come back and say go ahead and test the market, you won't find what you're looking for, but all it takes is one team. Are we sure someone wouldn't get caught up in the Kyrie name recognition and talent level and pay him, especially if they are a franchise that doesn't really get the top free agent? That's the risk the Nets are potentially taking.

That's why if you were to ask me how this all ends, my guess is Kyrie signs like a 2+1 extension with some games played clause in it or something. I wouldn't rule out a 1+1 either or as Iike to call it the LeBron special. If he's able to be healthy and have a good year, he hits the market sooner when there may be more options for him, and the Nets don't have to worry about a long term extension or losing an asset for nothing.

But that doesn't mean we aren't going to be going back and forth with this drama until free agency starts in a month. If anything, it's only going to heat up. Think about it, we haven't even gotten to the reported "mystery team" that's interested in Kyrie yet! There's always a mystery team! My guess is that's the next domino to drop considering that's how these things tend to work.