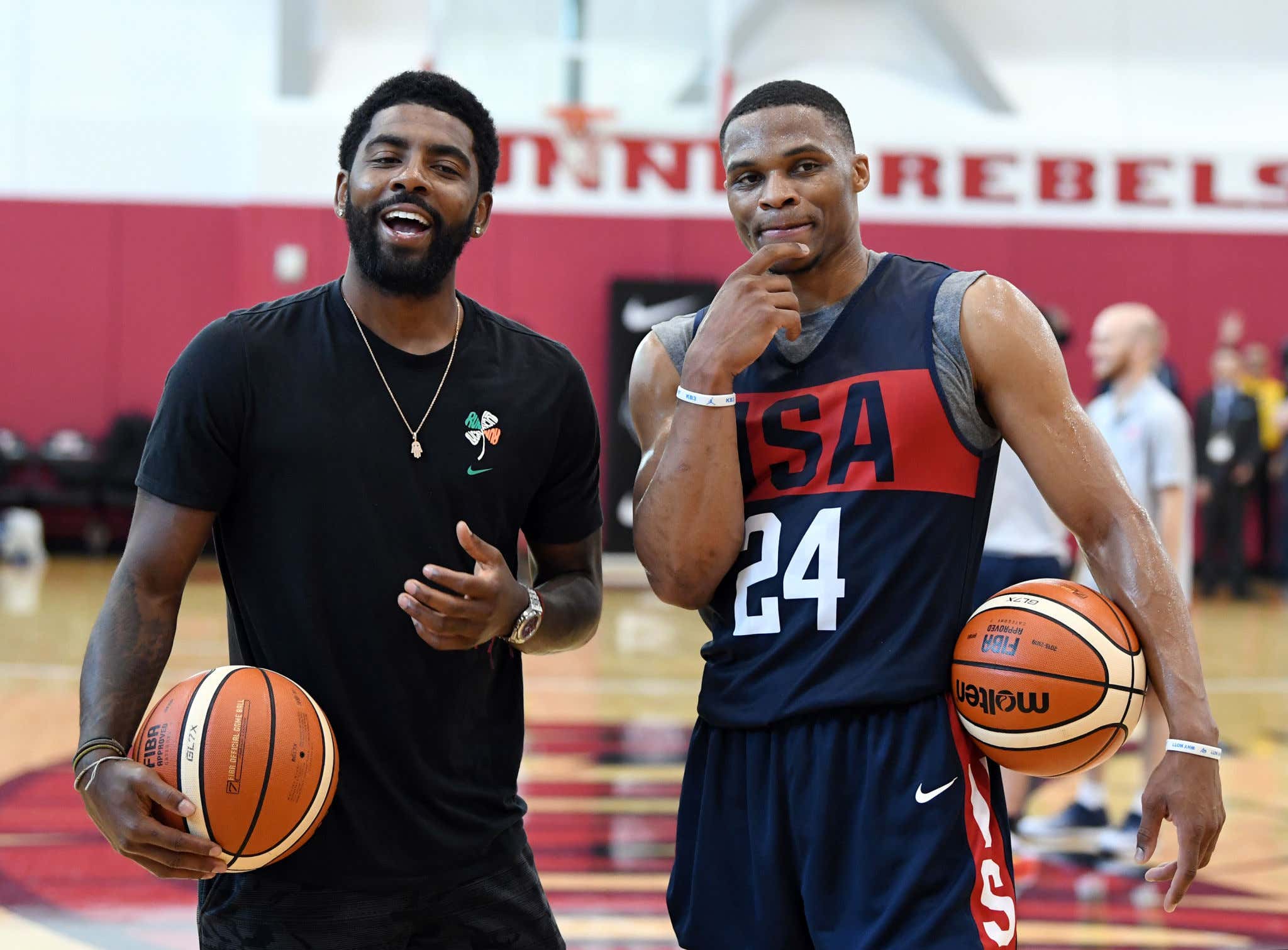 Now this is example #235487367 of why there's nothing like the NBA offseason/rumor mill. We all need to fill time with something until the next game of the NBA Finals which isn't until Wednesday, so here's a nice juicy Westbrook/Kyrie rumor that certainly does the trick. As we know, no contract in the NBA is untradeable, and I don't think it's totally out of the question to entertain the thought of a swap like this.

First and foremost, the contract situations matter. Westbrook is on the books for $47M if he picks up his player option for next season. Kyrie has a player option for $36M if he opts in for next year, so there's some issues to deal with there in terms of making the money work, but that shit usually gets figured out. If you're the Nets, I can see not wanting to give Kyrie long term money, and rather than lose him for nothing, I guess getting 1 year of Westbrook isn't the worst thing on the planet. Remember, neither team really has any cap space available to replace either guy should they just opt out and leave for nothing. Given their respective free agent markets, I can't see that happening.

Fit wise, this obviously benefits the Lakers much more than the Nets, but I don't care about any of the basketball related shit with a potential trade like this. I care about the drama. KD and Russ being back together, LeBron and Kyrie, I mean that has fireworks written all over it, especially if things don't work out. Can you imagine a lineup of Ben Simmons/Westbrook/KD? Nobody is going to have to guard 40% of the Nets starting five. Then on the Lakers side, you're now banking your future and success on the health of Anthony Davis, Kyrie Irving, and an old as shit LeBron. I'm sure there's nothing to be worried about there!

I do wonder if the Nets could be bullied into making this trade if Kyrie threatens to leave for nothing unless they give him a legit extension, or trade him to the Lakers. That would be WILD. I'm pretty sure LeBron would rather play with Kyrie, and would it shock anyone if there was some back channeling going on? Kyrie loves to back channel. I'm not totally convinced that LeBron isn't this "NBA Insider" either. I also can't imagine KD would sign off on such a trade, and if KD isn't on board then you're just asking him to demand out if you do it anyway. The Nets decided to let Kyrie and KD run their franchise, now they have to live with the results. Unless he finally allows them to get out of the Kyrie Irving business and assures them that it won't impact his standing in BKN, they are stuck.

But for drama's sake, we all need this to happen. It would be too perfect. Sadly, that's probably the exact reason why it most likely won't, and it'll just be another summer NBA trade rumor that ultimately flames out. That's too bad. Something tells me this isn't going to be the last time we hear about this though, the summer is just getting started. How much you want to believe it could actually happen is up to you.