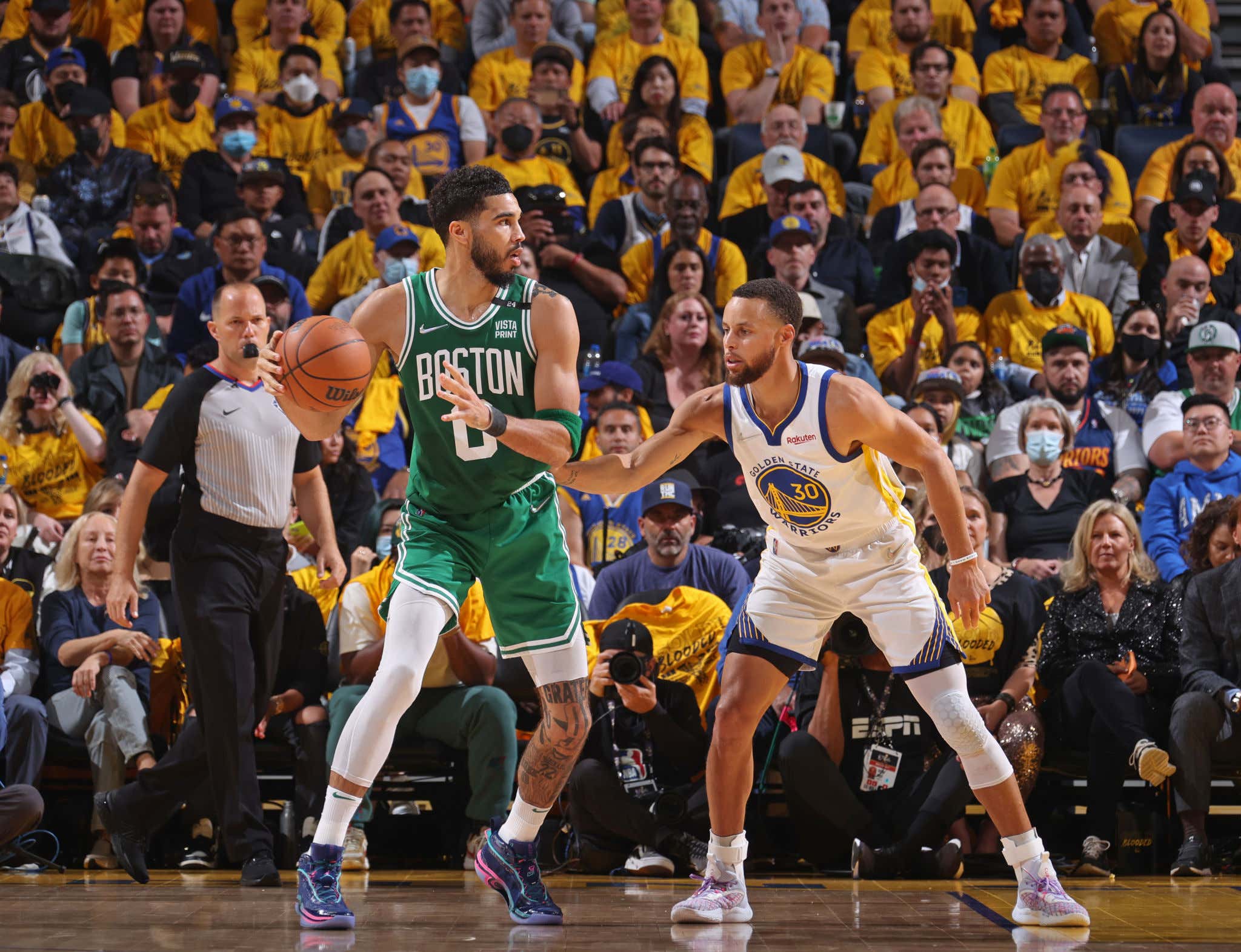 The time has come to completely erase Game 1 from our minds. I know, it's hard, you may not want to, but I am afraid I have no choice but to force you to

This is how I would like the Celts to approach Game 2. Play like you didn't have a 40-16 4th quarter and are currently down 0-1 where in a sense you are playing for your playoff lives. Ever since the Nets sweep (remember, KD/Kyrie couldn't even win a game lol) one of the things we have been begging this team to do is not throw away their prime opportunities coming off huge wins. Sadly, time after time after time they did just that. By winning Game 1, my gut said hey maybe they might be on to something because they built off that Game 7 win. I think it helps that the Celts are in this huge spot on the road, where there's no time to be comfortable. It's usually when they come back to the comforts of their own building that things tend to go south. It makes no sense, but whatever.

When you take a step back and think of what is right there for the taking, it's a bit overwhelming. Going on the road and taking BOTH games so you return to your own building up 2-0? It literally cannot get more massive than that at this stage of a series. As someone who likes to look back in NBA history with this kind of stuff, teams all time are 23-4 in a 7 game series when they take the first 2 on the road. In the NBA Finals, teams that are 2-0 overall are 31-5 all time (sorry Suns fans, didn't mean to trigger you). I've said it before, I'm not a huge math guy but those seem like decent records.

That's why the Game 1 win was so important. I think we all said the same thing after the buzzer hit 0.0 on Thursday. The Celts are playing with "house money" for Game 2. That sound familiar? And while it's technically true, I see tonight as even more important. The last thing I want is the Warriors feeling any sort of positive momentum heading into Game 3. I don't know much but what I do know is that when you have an opportunity to really tighten the screws against this GS team, you should probably do it. They are just as capable of winning on the road as anyone, and it's not as if the Celts have been lights out at home over the last two series. In fact, they are below .500 (3-4) over their last 7 home games. All I ask is that they don't come out and "punt" this game. We'll pretty much know right away too. We've watched enough of this team to know when they are locked in and when they are playing with the approach of "ah well, we already did what we set out to do". Hopefully considering this is the NBA Finals, we get the first one.

To do that, it obviously starts with getting a massive bounce back shooting effort from Jayson Tatum. Notice I didn't say "bounce back game". I would describe Tatum's Game 1 as a poor shooting but good impact game. What I need in Game 2 is a good shooting and good impact game. The good news is history tells us that should definitely be on the table tonight

The easiest way I can think of Tatum getting back on track is to make sure he has the right offensive approach. It's not as if the Warriors are loaded with size and elite rim protection. If you look at his shot chart from Game 1, does this look like a guy that was super aggressive offensively? 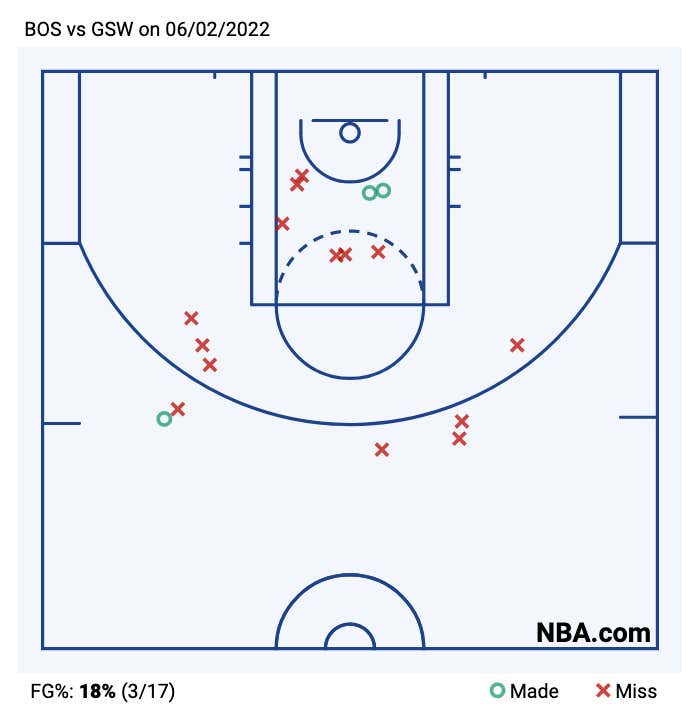 Not to me it doesn't. We all know what aggressive Tatum looks like, and that was not what we saw in Game 1. It'll be interesting to see what type of adjustments defensively the Warriors make knowing that Tatum will probably be looking to be more aggressive in this game, and I think that starts with Draymond. Wiggins got the majority of the assignment with 28 possessions against Tatum, but it would not surprise me if we saw the Warriors adjust to have Draymond move off Horford and take more Tatum matchups when Wiggins is off the floor. They talked about being more physical and making the Celts feel their defense, well they can do that by limiting Green's defensive possessions as just a weakside roamer.

In terms of other Warriors adjustments, I think we can all expect Steve Kerr to completely bail on lineups that include 2 non shooters. I just don't know why you ever do that against a defense like this. That just makes things so much harder on the Warriors to score in the half court in the event that Steph is getting clamped. Any lineup in Game 1 that included Iggy/Draymond had a -19.6 net rating. There's no way we see Kerr go back to that pairing so often again tonight. Why the hell would he? That means the Celts are going to have to be much more prepared for lineups with legit shooters at all times.

When it comes to the Celts defense, I'm wondering if they'll still be so committed to playing drop as frequently as they did in Game 1, mostly because I don't really enjoy the idea of baiting this Warriors team into open looks. My guess is guys like Jordan Poole and Klay won't be as bad tonight. We know giving Steph any sort of space is maybe the stupidest thing you can do. When this team switches, they look great. When they play drop and go under screens, we saw what happened. I'd say considering you are built to switch, make the Warriors prove they can consistently beat switches. But as long as Steph is on the floor, cut the shit. I trust Rob or Al to do their best if they find themselves on an island with Steph. What I don't want to happen is stuff like this 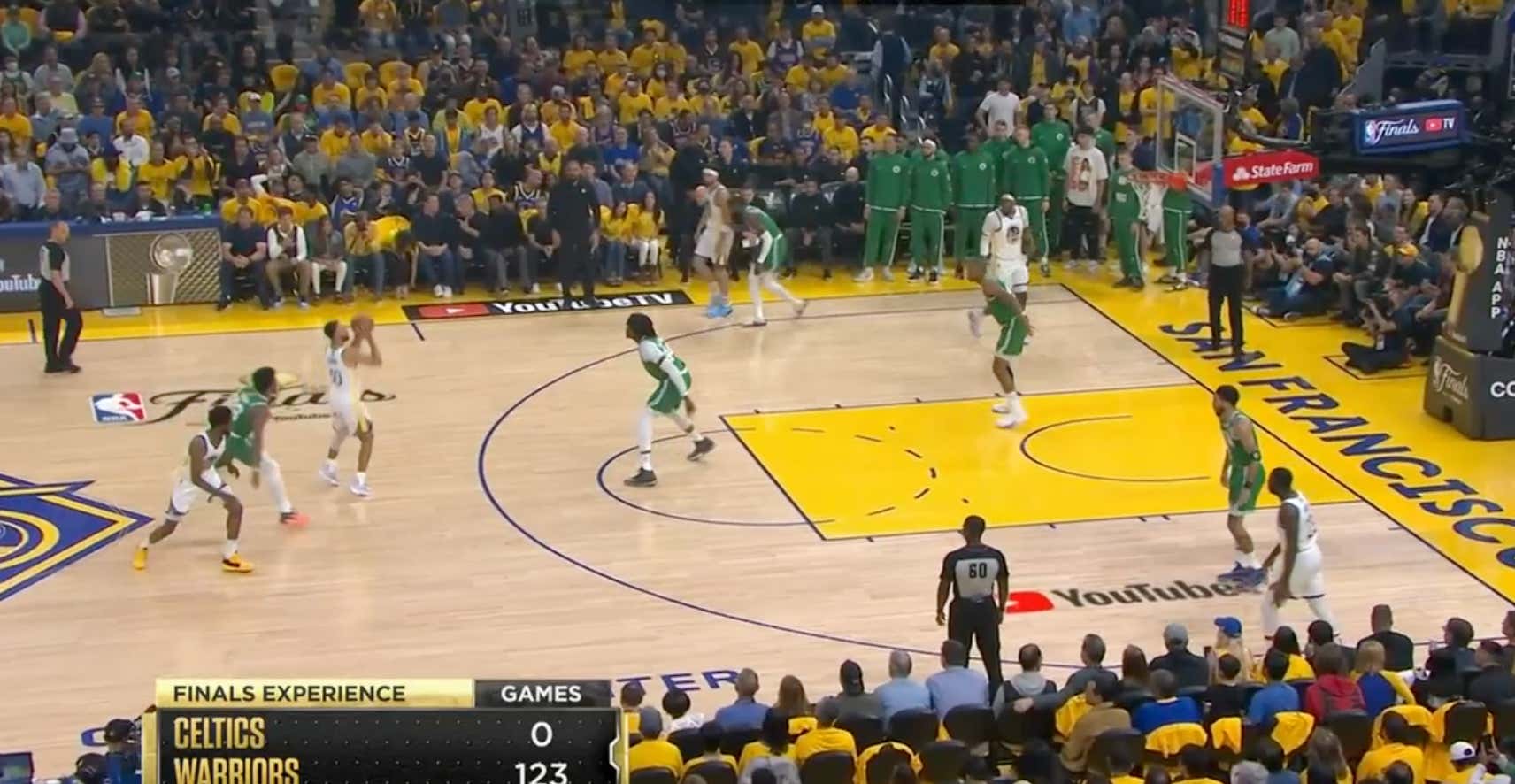 That's a layup for Steph Curry. We're going to see the high screen pretty much every time Curry has the ball. You have to make sure you meet him at the level and then figure out the rest later. That's the type of respect he commands.

Aside from figuring out what to do with screens, it goes without saying that if the Celts want a 2-0 lead in this series, they have to address the rebounding bullshit. For the love of christ just box out Kevon Looney. The Warriors had 26 of their 108 points coming off 2nd chance points, and that doesn't even factor in extra possessions they got from things like turnovers. You've already lucked out if this team misses, but giving them 2nd and 3rd chances never ends well. That's where you get the momentum threes that can open a game up in a blink of an eye. You want to know why the Celts came back in that 4th quarter? Just look at the rebounding. They won it 11-6 in that quarter and only allowed 1 OREB and it came when the game was over. Finishing defensive possessions could not be more crucial tonight.

Then there's the mental composure aspect of this game. We know the Warriors are going to be the more desperate team, so you have to match that energy. To go along side that, it's a Zach Zarba and Tony Brothers game tonight. Those two are the Celts kryptonite when it comes to keeping their mental composure. There is going to be some fuckery going on for both sides, that's how Zarba and Brothers work. We know that because of what happened the last time this team saw Zach Zarba, which was the Game 6 against the Heat. What happened in that game you might ask?

So you can bet your ass there will be some fuckery at some point in this game. The Celts have to just play through it. Things are too important to bitch and complain and not get back in transition.

I think we all fully expect to see the Warriors best shot tonight. They have to, their season could very well be on the line tonight, and that will bring out a different type of energy. They got a nice lead in Game 1, then they got cocky like they usually do because teams don't tend to punch back once the Warriors 3rd quarter bukakke happens. What they learned is that the Boston Celtics do punch back. I don't think we'll see the Warriors take their foot off the gas tonight. My guess is Steph will play over 40 minutes. There will probably be some three point shooting regression from the Celts role players, which is to be expected.

But as long as this team rebounds, is committed to the defensive end and takes care of the basketball, they have as good a chance as any to go back to Boston up 2-0 with full control of this series. I know we all would have been cool with a split when this series started, but now I want both. It's right there for the taking, so just fucking take it. Take steps forwards, not backwards. Build on your success, don't shoot yourself in the foot. Play your game, and that'll be enough.