What could possibly go wrong as Ten-Cent Beer Night brings a larger crowd than usual to Municipal Stadium? As the Cleveland Indians rally to tie the Texas Rangers 5-5 in the ninth, fans get out of control. It started when a fan tried to steal Jeff Burroughs' hat. This helped spark a riot that had players from both teams battling fans with baseball bats as Umpires called the game a forfeit win for Texas.

The Cleveland Indians had trouble filling the spacious Municipal Stadium, often drawing 5,000 or fewer fans to a stadium that could seat 70,000. Looking to boost the attendance on weeknights, the Tribe would host cheap beer nights. These events usually went without incident as the Indians hosted nickel beer nights as far back as 1971. The ten-cent beer night came with no limit, as the 25,134 fans were larger than expected.

The fuel that caused the riot on ten-cent beer night way had been laid a week earlier as the Indians and Rangers were involved in an ugly bench-clearing brawl in Arlington. In the week leading up to the rematch, there was rhetoric on both sides showing that more ugliness could be on the docket when the teams met at the “Mistake by the Lake.” In the days leading up to the game, local radio host Pete Franklin stoked the flames, while the Cleveland Plain Dealer ran a cartoon of Chief Wahoo holding a pair of boxing gloves. Following a game won by the Rangers 3-0, Texas Manager Billy Martin was asked if he would take his armor to Cleveland, to which he responded that they did not have enough fans to worry about them.

Both teams that finished in last place in 1973 showed signs of improvement over the first two months of the 1974 season. The Indians entered the game in fourth place with a record of 24-25 under Ken Aspromonte, while Billy Martin had become popular in Texas with the Rangers in second place at 25-25. Fergusson Jenkins was chosen to start the game for Texas, while Fritz Peterson, recently acquired from the New York Yankees, was on the mound for the Indians.

As fans loaded up on beer, the Rangers drew first blood, with Tom Grieve hitting a second-inning home run off Peterson. Texas added a second run in the third inning as Cesar Tovar doubled home Jim Sundberg. Dick Bosman came on in relief for Cleveland in the fourth inning as Grieve hit a second home run to make it 3-0. In the fourth inning, Leron Lee hit Jenkins with a line drive to delight the crowd. Lee would later score the Indians' first run on a single by Oscar Gamble. However, the Rangers added two more runs on a triple by Toby Harrah that scored Tom Grieve and Jim Fregosi in the sixth. The Tribe answered in the bottom of the inning, scoring two unearned runs to chase Jenkins following a Mike Hargrove error at first base. 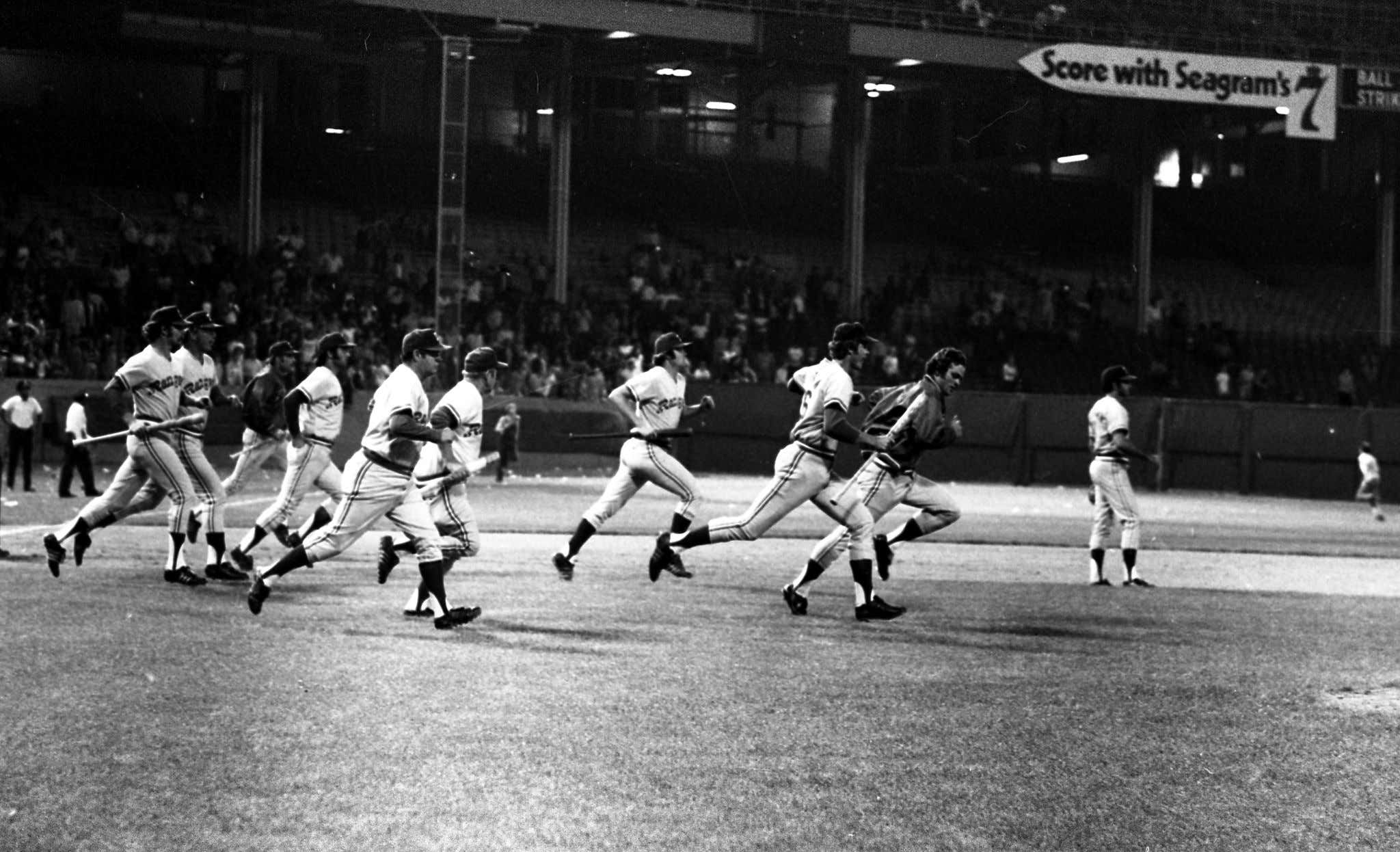 While Tom Buskey and Milt Wilcox settled things out of the pen for the Indians while Steve Foucault seemed to have things under control for Texas entering the ninth inning, George Hendrick started the Indians' rally with a one-out double, scoring one batter later on a pinch-hit single by Ed Crosby, Rusty Torres followed with a single whipping the rowdy crowd into a frenzy. The Indians would go on to load the bases on a hit by Alan Ashby. The Indians would tie the game on a sac-fly by John Lowenstein. However, they never had a chance to win the game as all hell broke loose.

Several incidents throughout the game were leading up among them, several streakers, one of which seemed to run after Tom Grieve during his second home run. A father-son team came on the field to moon the fans in the bleachers. Ranger’s first baseman Mike Hargrove was pelted by hot dogs and hit by an empty wine bottle. 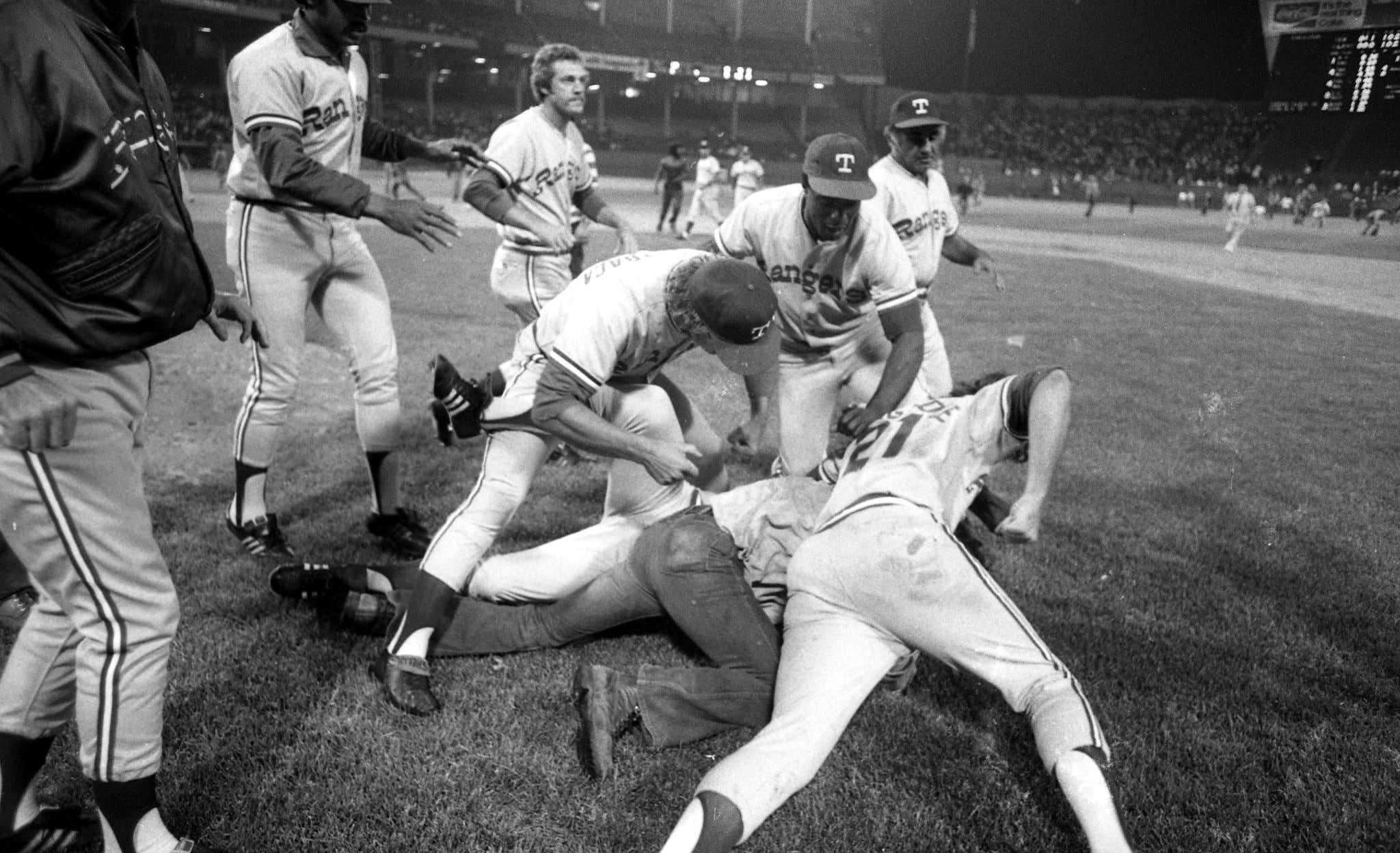 Following Lowenstein’s double, a young fan ran onto the field and tried to swipe Right fielder Jeff Burroughs’ hat. Burroughs tripped while grappling with the fan, leading his Texas teammates to believe he was under attack. This led manager Billy Martin and the rest of the Rangers to run out to assist Burroughs with baseball bats. As the Rangers ran out with baseball bats, fans began charging the field, bringing whatever they could to match the visiting ballclub. Fans had batteries, rocks, folding chairs, and broken pieces of stadium seats. Some even had knives and chains. Seeing the Rangers under attack, Ken Aspromonte sent his Indians out to the field with bats to defend their brethren from their fan base. Things continued to spiral out of control as Cleveland reliever Tom Hilgendorf was hit with a folding chair. Hargrove, meanwhile, began fighting the fans in hand-to-hand combat.

The two teams retreated off the field, one protecting each other from the inebriated fans. Umpire Nestor Chylak, the crew chief who was struck in the head with a stadium seat and had his hand cut by a rock, had no choice but to call the game a forfeit win for the Rangers. The Indians would run another ten-cent beer promotion later in the season but had a two-beer limit for the discounted prices. It would be the last such promotion, as baseball banned further ten-cent beer nights.

Rusty Torres, who was on base representing the winning run, had a Forrest Gump-like existence and was on the field for the three forfeits in the 1970s. Torres played for the Yankees when they were on the road for a riot caused by angry fans in Washington before the Senators' final game in 1971 on the way to moving to Texas. He later was a member of the Chicago White Sox in 1979 when they forfeited the second game of a doubleheader against the Detroit Tigers on Disco Demolition Night.