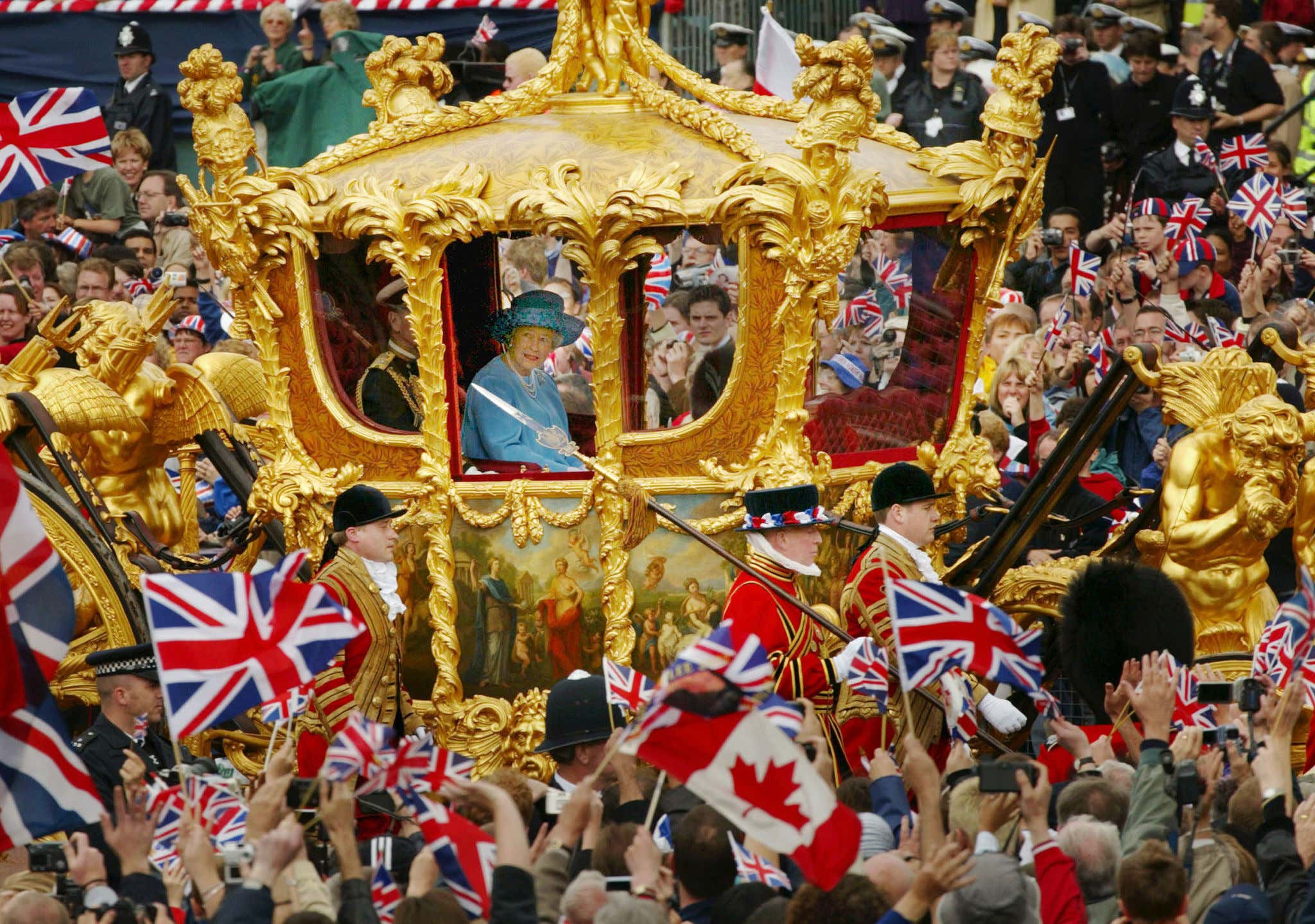 If you don't have a woman in your life who sometimes gets to control the clicker, you might be unaware that the Queen of England is having some kind of huge celebration or other. And to borrow a quote from the legendary Lt. Frank Drebin of Police Squad, just days before he saved Her Majesty from being killed at the hands of a murderous, hypnotized Reggie Jackson, "No matter how silly the idea of having a queen might be to us, as Americans, we must be gracious and considerate" about the whole affair. After all, the Royals work their asses off for minimal pay, toiling in obscurity. So it's good that they get recognized once in while. With more than just a mug that reads "Worst Best Monarch" or whatever.

And sure, it might all seem like a colossal waste of time and money from our side of the Atlantic. But then so does warm beer, blood sausage, government-run TV, driving on the left side, and any of their sports but golf, tennis, and anything with Ted Lasso. There's a reason our ancestors packed their shit and moved out. And ours is not to judge.

But at least some good actually came out of the Jubilee. Great Britain has used the occasion to ditch the Metric System and bring back the Imperial Measurements that they themselves gave to the world. And that only we and a couple of other places have kept:

The Guardian - Boris Johnson will reportedly announce the return of imperial measurements to mark the Queen’s platinum jubilee, in an apparent attempt to garner support among Brexiter voters in battleground seats that the Conservatives are in danger of losing.

Britain currently uses a mix of imperial and metric measurements, with speed limits in miles per hour and milk and beer bought in pints.

It just so happens that Johnson is embroiled in a scandal over the fact that during the worst, strictest Covid lockdowns, he and some of his advisors were regularly having booze-fueled parties behind closed doors. (We of course have a term for our politicians who violated the very quarantine laws they placed upon us. That phrase is "All of them.") So there's a lot of pushback against this move. It's being regarded as a cynical ploy to deflect attention away from the wrongdoing and hypocrisy:

The Guardian again - The Tory peer and Asda boss Lord Rose said returning to imperial weights and measures was “complete and utter nonsense” and would “add cost” for businesses.

He told Times Radio: “I’ve never heard such nonsense in my life. I mean, we have got serious problems in the world and we’re now saying ‘let’s go backwards’.

“Does anybody in this country below the age of about 40 know how many ounces there are in a pound?”

Let me how out Lord Rose by answering his question. No. No they do not. And it's not just people below the age of 40. It's everyone around the world. That's why you can't get a Quarter Pounder with Cheese:

But that's missing the point. Yes, the Imperial System is confusing and pointless. The basic linear measurement was determined by the length of the foot of some Royal no one can name, and then divided by 12 for some stupid reason. But that's how we likes it, dammit.

I heard a guy in the construction trades once say that he hired a neighbor's son for the summer after his high school graduation just to keep the kid out of his parent's hair. On the first day, he asked this young adult to cut a bunch of 2X4's to four-foot lengths. When the kid was done, they were all too short. Because he thought there were 10 inches to a foot. Even though tape measures have the feet carefully marked right on them.

And I defy anyone to figure out how many cups there are to a quart or pints to a gallon or whatever. Everything we measure by length, volume or weight is a confuse-opoloy. Divided into units and subunits that are divided randomly, with no logic whatsoever. Even the Farenheit scale only makes a bit of sense when you're measuring the outside air temperature. Because generally speaking in the Northern Hemisphere, 100 degrees is almost as hot as it ever gets and 0 degrees is about as cold as it gets. But water boils and freezes at weird temperatures you have to learn in elementary school science.

But deal with it. There's no point to Imperial Measures, which sort of is the point. The British came up with this nonsense, then built the best ship, ruled the seas, put together a winning streak of a several hundred consecutive years, built an empire upon which the sun never set, and had people from Ireland to North America to Australia to India, measuring their floor space by how many times an old dead guy's foot could've fit in it. And measuring long distanced by 5,280 of those feet. That's a proud tradition they never should've gotten rid of in the first place. Especially not just so they could measure stuff the same way the Norwegians do.

Our excuse for keeping in the US is that we were just too lazy to. Hell, we almost held an armed uprising when they wanted to put kilometers per hour in small letters at the bottom of our speed limit signs. And miles aren't even our creation. If you're really proud of your country and your culture, you might want to spend less time fawning over your royalty and more time appreciating that part of it that has confused people trying to do carpentry, cook, or order food from a butcher shop for hundreds of years. I can tell you that the world will have to take the silly Imperial system from between America's cold, dead hands.