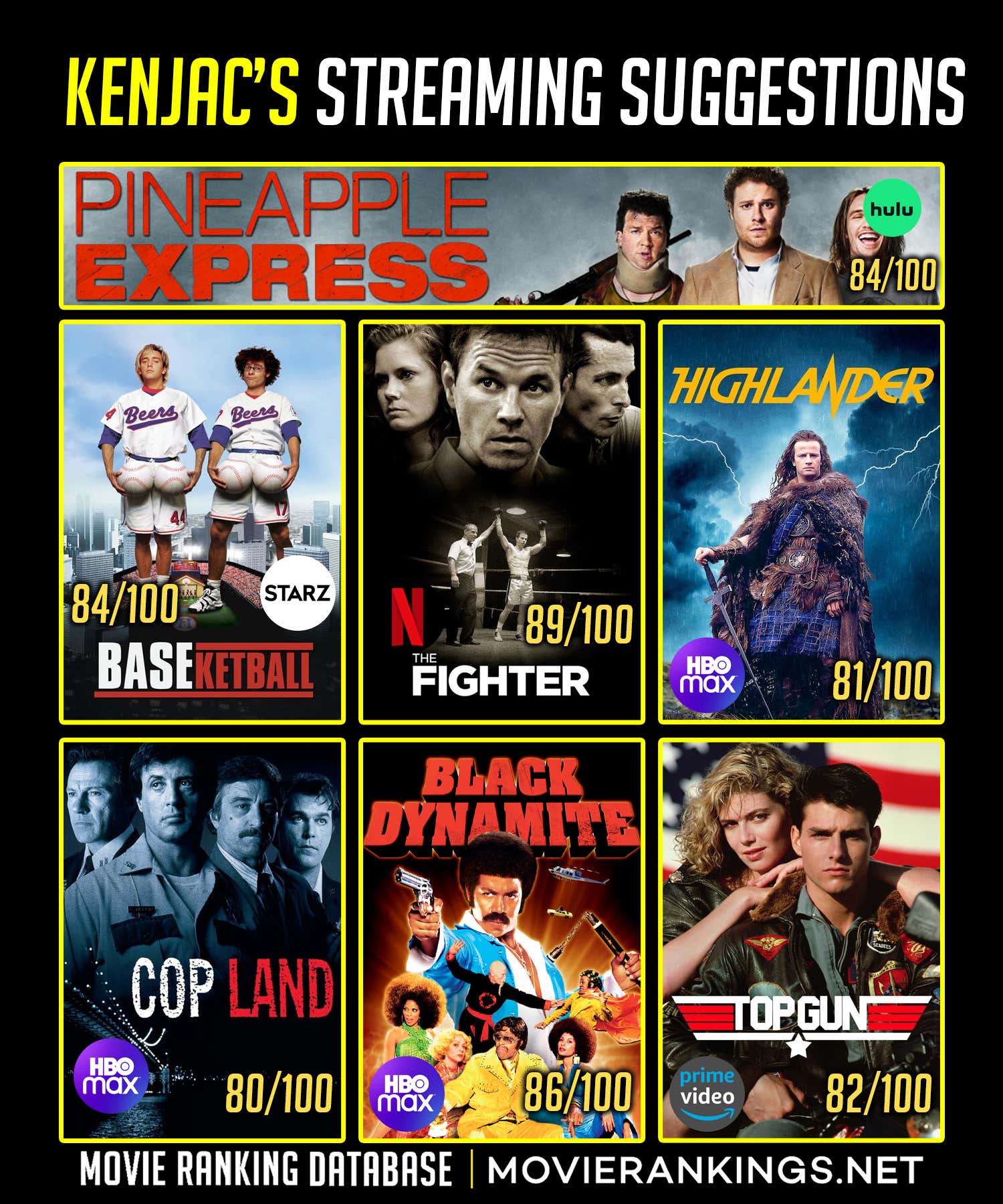 The Fighter, is a drama about boxer "Irish" Micky Ward's unlikely road to the world light welterweight title. His Rocky-like rise was shepherded by half-brother Dicky, a boxer-turned-trainer who rebounded in life after nearly being KO'd by drugs and crime.

Christian Bale is obviously one of the best actors in the game with a ton of legendary performances. For my money's worth, though, this is his best. Super layered and a TON of pain behind it.

He fought his first battle on the Scottish Highlands in 1536. He will fight his greatest battle on the streets of New York City in 1986. His name is Connor MacLeod. He is immortal.

The only thing that held this movie to cult classic status instead of fantasy legend was Christopher Lambert being a bad actor. The queen soundtrack, the Kurgan, Sean Connery as a scottish-accented egyptian spaniard. They all were incredible

Freddy Heflin is the sheriff of a place everyone calls “Cop Land” — a small and seemingly peaceful town populated by the big city police officers he’s long admired. Yet something ugly is taking place behind the town’s peaceful facade. And when Freddy uncovers a massive, deadly conspiracy among these local residents, he is forced to take action and make a dangerous choice between protecting his idols and upholding the law.

After Ray Liotta passed, me and Rico actually talked for a bit about this underappreciated gem. It's got a killer cast of gangers movie icons in Stallone, Keitel, De Niro and Liotta if you're into that. It was also directed by James Mangold, who ent on to direct Logan, Ford V Ferrari and is making the new Indiana Jones movie. g^VF5CXD4S

This is the story of 1970s African-American action legend Black Dynamite. The Man killed his brother, pumped heroin into local orphanages, and flooded the ghetto with adulterated malt liquor. Black Dynamite was the one hero willing to fight The Man all the way from the blood-soaked city streets to the hallowed halls of the Honky House…

This parody blaxploitation movie is one of my favorite comedies to rewatch. It has endless one-liners and I guarantee it will get a laugh out of you.

A stoner and his dealer are forced to go on the run from the police after the pothead witnesses a cop commit a murder.

Every time I rewatch this movie I find a new hysterical moment. Yesterday night was no exception.

For Lieutenant Pete 'Maverick' Mitchell and his friend and co-pilot Nick 'Goose' Bradshaw, being accepted into an elite training school for fighter pilots is a dream come true. But a tragedy, as well as personal demons, will threaten Pete's dreams of becoming an ace pilot.

With the sequel quickly becoming one of the greatest summer blockbusters maybe ever, there is no better time to revisit the original.

Two losers from Milwaukee, Coop &; Remer, invent a new game playing basketball, using baseball rules. When the game becomes a huge success, they, along with a billionaire's help, form the Professional Baseketball League where everyone gets the same pay and no team can change cities. Theirs is the only team standing in the way of major rule changes that the owner of a rival team wants to institute.

I randomly thought about this movie earlier, specifically about my documented love of it.