With that video above, the second tournament of The Dozen came to a WILD conclusion. There were 20,000 people watching live and that YouTube in itself already has more than 100,000 views let alone all the other platforms it's been shown on. It was an absolutely incredible tournament, so I threw together my Top 5 moments along with some random thoughts on the show and welcome anybody with any other choices to put them in the comments.

We'll lead things off with the list because people loooooove lists for some reason.

5. The Bonus Round In The Finals 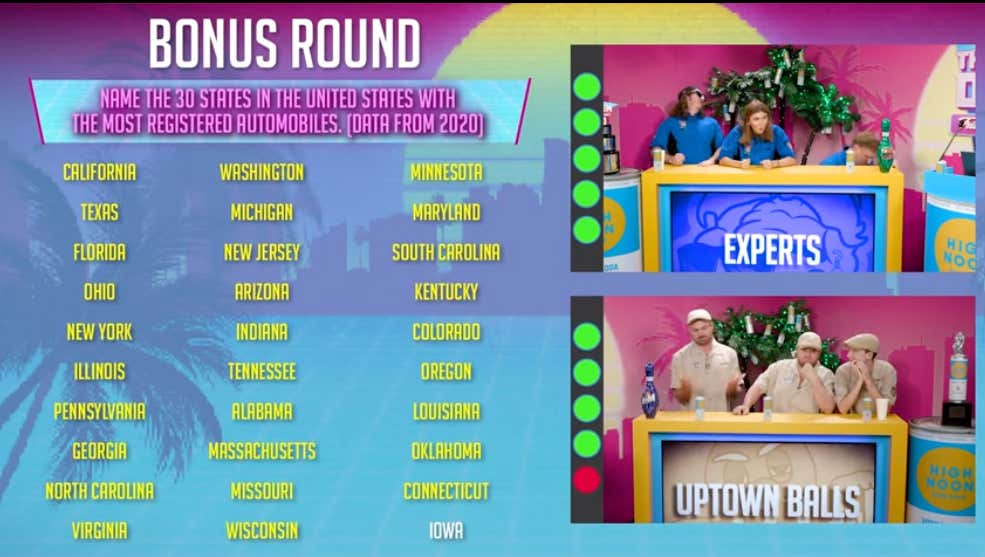 Someone once said that Steven Cheah is either the dumbest smart person in the world or the smartest dumb person. I'm still not sure which one he is. But the more things like this keep happening with him, it becomes more and more clear that one of those is correct. And that's coming from someone that's been in the #CheahHive since Day 1. The sick thing is I'm pretty sure Big Cat and Rone hate getting answers wrong slightly less than they love being able to bust Steven's balls about it.

3. I Pull Sandies Out Of My Brain's Ass

I'm really not one for self promotion but you guys have to understand til this day I still have no clue how I got that question right. My brain was nothing but an ocean black as I was trying to think of the answer and then it just appeared for a millisecond before getting it right. I've never felt the feeling that happened in my head before or since and Chris' tweet perfectly summed up the rollercoaster my meddulha oblangata went on as I searched for a cookie I haven't thought about in at least 30 years.

Jeff's reaction to this answer after seeing roughly a billion answers over the last two years says it all.

My favorite part about this other than a much-needed point in the playoffs and my boss calling me a monster (in a good way, I think) is that I can now mock my Snackin' Off brother KFC with Sandies for the rest of my life.

I love Mintzy. The man exuberates more passion in a minute of his day than I've done in my entire life. It's an absolute pleasure to watch, whether he is screaming about a big 3rd inning in a regular season Ole Miss college baseball game or is performing at halftime of the Super Bowl.

However, a man with that much electricity running through his veins can't turn it off easily and as he ended up burning his own team, which led to a classic picture, as most moments at Barstool do following something unfortunate happening to an employee here. 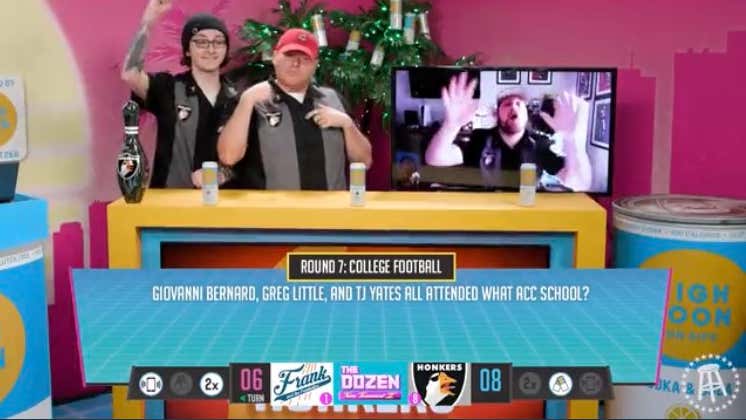 It was nice to see Brandon Walker offer his condolences.

1. The Yak Gets Kenjac'd Up

The faces in the room right after that happened say it all. 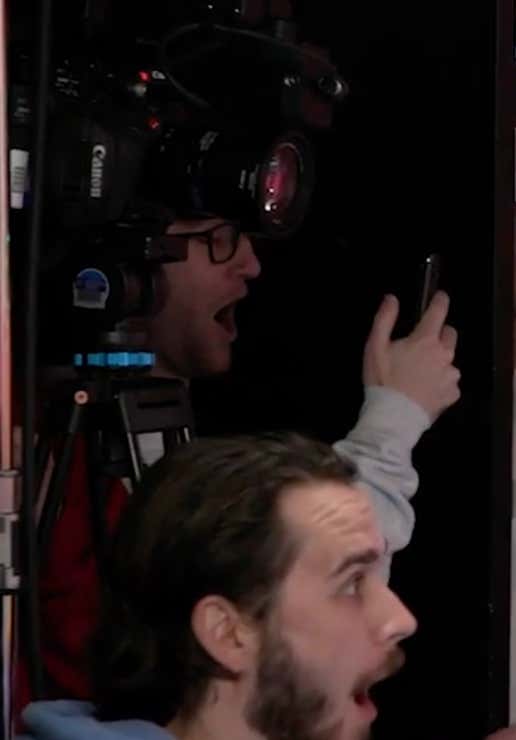 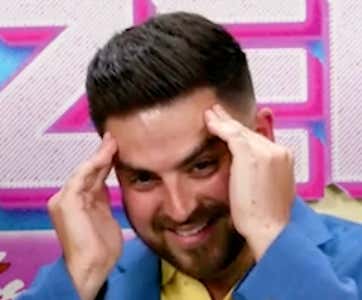 Unfuckingreal and I'm honestly still in shock about this. I heard KenJac say earlier that day that he had a grudge against The Yak and that he would love to pay it back. But never in a million years did I think he would actually do it. Not because there is some unwritten code amongst The Dozen competitors or anything like that. Far from it. But because Big Cat and Rone may be the two people you want to fuck with least at this company outside of Portnoy, who probably won't be at HQ anytime soon. Meanwhile, this is what KenJac was greeted to when he walked to his "desk" the day after this match aired.

Now that Pandora's Box has been opened, everyone that calls a coworker here at Barstool for a Phone A Friend will be thinking in the back of their head that it may end up being a Phone An Enemy because of something they said or did. Absolute mental warfare.

Luckily for Ziti, we have the most powerful man at Barstool running our ship and two happy go lucky big guys that hopefully haven't made too many enemies here. Nonetheless, shout out to the real BADDDDD BOYYYY of The Dozen for creating a legendary moment. 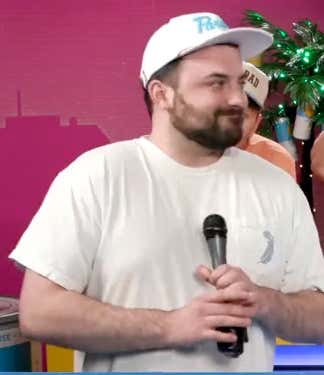 We need The Yak vs. Team Smockin on Christmas Day. Make it happen Jeff D!

Onto some random thoughts about The Dozen in general.

- Pray for Brandon. Seriously. I know he took that loss hard at the time but having to sit on it for two weeks then relive it all again must be bad.

Based on everything I know about people that work or consume Barstool, nobody is going to pray for Brandon. That being said, it was evil to give these shirts to interns today.

I hope the Ziti shirts have been sent to a beautiful African nation because the mere sight of them makes me want to cry. 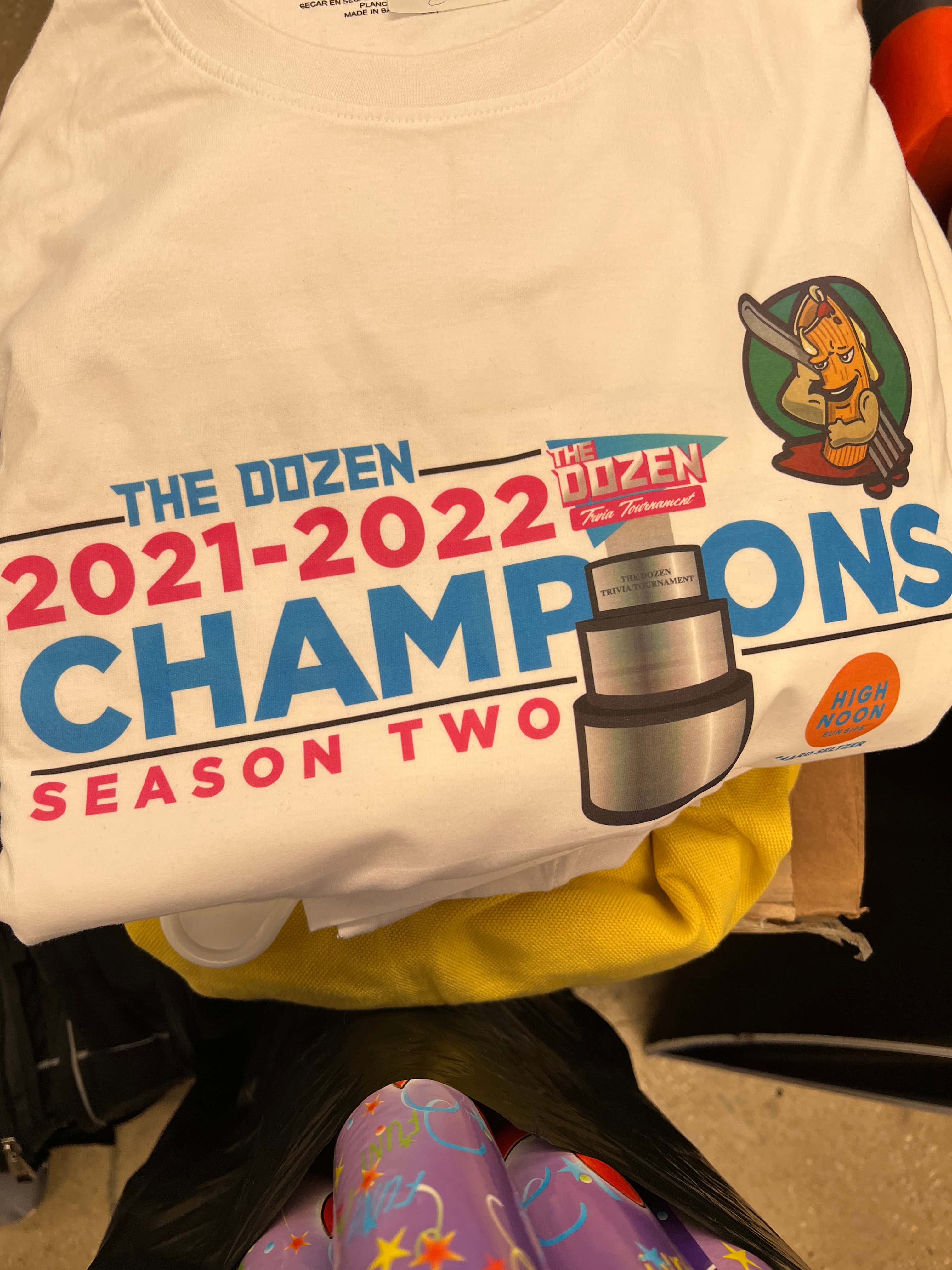 - While we're on the topic of that beautiful pasta dish, Ziti ain't bad. We aren't great. We can occasionally be worse than good (See: The Chicago Show). And most certainly have dead spots on our trivia radar. But we sure as shit ain't bad considering we were over .500 as a full team this year despite having BY FAR the hardest schedule in the league, clearly because Jeff knows that any team with me on it should face other main eventers.

Yeah yeah yeahhhhh, I know the people watch for Davey Pageviews. Nonetheless, I ask for any member of the #ZitiFam to please vote for us in the fan polls next season because being a double digit seed was an absolute slough and we deserve better.

- Another team that deserved a better seeding was Uptown Balls because those guys are fucking GOOD. You usually don't have to say something like that about the newly crowned champs but after seeing them rip through the tourney, I have nothing but #RE2PECT for those three finely capped gentlemen.

After they beat us, I felt like we could've won if we had talked out the NFL Fired Coaches Bonus Round and the Candy Niche with those shitty ass Sixlets.

However looking back, we probably would've just delayed the inevitable of being rolled by the Uptown Balls (I was right about Inside Man btw. That movie fucking rules). Please vote these guys higher next season as well because they are wayyy too good to be a double digit seed.

- Now that we are in the offseason, it's time to think about offseason moves.

As someone that loves drafts, trades, and free agency drama in sports probably more than actually watching the games, I love the idea of The Dozen incorporating all three of those. It'll create some fun teams, new rivalries, and a shitload of drama in a company that is at its best when people are at each others throats. Reags said it best, even though he cursed himself by betraying The Misfits. #TeamHank

- That being said, I think I would retire before playing with anybody other than these two young men.

I still can't believe I booped my boss

- If you are a fan of The Dozen and haven't watched the Behind The Dozen doc that was released, you are missing out.

If you aren't a fan of The Dozen, why the fuck did you click on this blog let alone make it this far? The only reason I can guess is that you are a fan of me, in which case I love you more than you will ever know.

While we are on the subject of The Dozen fans

- The Dozen fans are the best. Jeff said it in his postgame speech but you guys really are the best. The amount of love I get from Stoolies online or that I see in person for being The Snacks God or from some moment on the show is incredible to me. Just like everything else here at Barstool, the fans are the fuel for the rocketship and The Dozen is no different.

- The Dozen fans are the worst. Namely fans of The Dozen that do shit like this.

If you are writing shit like that to a total stranger, you need help. If you think someone like Jeff D. Lowe is purposely rigging a game knowing that it would lead to a thousand anonymous people flooding his mentions, you have lost your damn mind. Jeff D. looks like he is going to puke every time a minor controversy comes up and there is no way he would've rigged a tournament without having Frank The Tank or Big Cat in the finals. Trust me, I grew up watching the NBA when David Stern was commish.

Giphy Images.
I think enough time has passed that we can use this gif again

- HOWEVAH, to piggyback off Jeff D. Lowe's NCAA football point, I think that every participant on The Dozen should be allowed to cash in on their NIL like college athletes. Maybe call us trivia athletes so I can be considered an athlete for the first time since 8th grade. If there are any snack companies, ziti companies, or companies that want to invest in the hottest internet trivia show on the planet, my DMs are open on Twitter. Please remember that I do have a family and my teammate puts asses in the YouTube seats, so all offers must include at least one comma.

- Lastly it has to be said again how incredible a job Jeff D. Lowe has done building this show from some Zoom project during the dog days of the pandemic into something that has developed a diehard following and looks as good if not better than almost anything we do here. It's absolutely phenomenal to see how everything has blossomed, in no small part to everyone that has contributed that Jeff listed here.

You know a Barstool product is good when Portnoy says something like this.

It's such bullshit we didn't get Jeff D. Lowe tears this year

- I only hit HQ about once a week when my schedule allows but The Dozen Week is by far the most buzz the office has all year and shows how great Barstool can be when a bunch of the people here work together. Obviously there is proof of how well shows can thrive living in their own little silos. But there are so much beautifully weird brains here that can make magic when they are all jumbled together. Hopefully more of these kind of collaborations happen in the future because whether it's The Dozen, an electric chair with fans watching their teams, or a good Dog Walk draft, I think that is when Barstool's at its best as a whole.