NY POST - Mary Magdalene has something to get off her chest.

The 25-year-old model was asked to leave her plane to Dallas, Texas, due to her 22-pound breasts.

The Toronto native donned leggings and a sports bra for her $5,000 Tuesday flight and was able to get through security and board the plane.

The cabin crew threw her off the aircraft for wearing her headphones and not listening to instructions from the flight attendants.

However, she believed that her departure had something to do with her appearance.

Magdalene took to social media to express her frustration, noting: “I was kicked off tf light [the flight] for how i look please stop discrimination please this is disgusting i feel so emvarrassed and [dehumanized right now], u guys have no idea.”

In a separate snap, she shared a selfie showing herself on her flight wearing her headphones and featuring her deep cleavage in her sports bra.

“Onviously this is why [she] kick me off, cuz I [look] too [explicit] bit thats not legal so she had to say its because I was sleeping snd vouldn’t hear her,” she captioned the post.

The influencer noted she plans to “sue the airline” and take legal action, but has not yet undertaken any steps to do so and has declined to reveal the airline carrier that left her high hopes to fly dashed.

In another Instagram post, Magdalene explained: “I do not get how some people are saying its OK that I would get kicked off for what im wearing.”

“The point is that the same rules need to apply for everyone!! Its not right to pick and choose who the rules apply to based on appearance/body type,” she went on. “Discrimination of any kind is not a nice feeling for anyone. If a small chested girl wore the exact same thing, they would not say anything.”

Sometimes blogs just write themselves. This is one of those situations.

First off, when I read she calls herself "Mary Magdalene" I spit out my green tea and I wasn't even drinking any, mostly because she more closely resembles Edward Scissorhands.

For my friends out there who weren't  ̶g̶r̶o̶o̶m̶e̶d̶ raised in the Catholic School system, or Sunday School, or CCD, Mary Magdalene was earlier portrayed and interpreted in the Bible as being a prostitute that Jesus cleansed of her sins. (More recently this interpretation has been refuted and changed though.)

Secondly, for the tik tok stoolies out there who have no idea who Edward Scissorhands is let me school you for a minute.

You know that Johnny Depp guy everybody's been talking about for the past month? Captain Jack? Yah well he's been acting for like 40 years now, except that calling what he does acting is a stretch. If he wasn't hot as fuck he'd just be John Christopher Depp the 2nd, struggling front man for Rock City Angels (sweet fucking band name to be honest) and later Hollywood Vampires

But, luckily for him he was born with movie star good looks and swagger off the charts.

As well as a bunch of 80s and 90s flicks. But NONE greater than the classic Edward Scissorhands.

He played a mute, mutant creation of a mad scientist thrust into suburbia, trying to be accepted while falling head over heels with the family who took him in's daughter, played by 90s babe Winona Ryder.

If you've never seen it. Watch it this weekend and thank me later.

Now back to Mary.

Third, Mary, let's be frank here for a minute.

that all time babe Agatha Christie put it best,

"In my experience, people who go about looking for trouble usually find it.”

You know how I know, without even knowing you, that this was all your plan from the start? Because just from looking at your Instagram page (nightmare fuel) one can tell you had this whole thing premeditated from the beginning.

For instance, who the fuck wears this to an airport?

There are children and shit here lady.

Next, she made sure to buy herself a nice seat front and center up in first class so the flight attendants would have to notice her, and the old rich dudes would oggle her while their wives seethed. Actually a pretty maniacal plan if we're being honest.

When all of that failed and the flight attendants didn't take the bait, and began reading the pre-flight safety warnings, she made sure to not take her headphones out despite being asked and told.

Bada bing bada boom she gets escorted off and takes straight to social media to gripe and claim discrimination.

And yes, like idiots, the NY Post, TMZ, and Barstool Dante all tee it right up for her.

So yes, I see the irony, but no I'm not sorry. Because I can't help it. Every year for like the past 15 years anytime family or friends ask what to get me for Christmas I tell them the same thing: "Mondo Freaks" 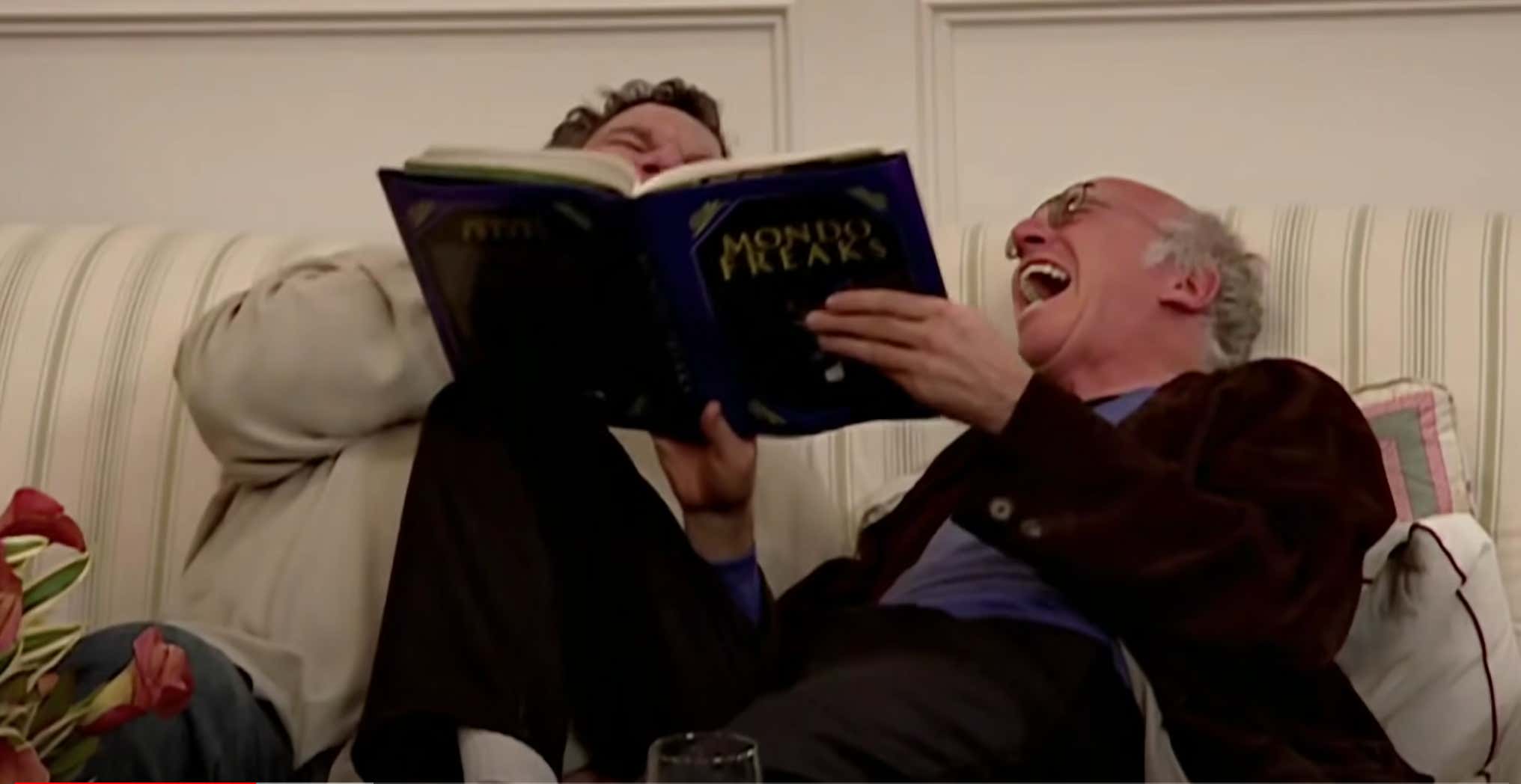 Aka "The Freak Book" from Curb Your Enthusiasm.

Sadly, the book is fictional and doesn't exist. But the point remains. I am obsessed with freaks. Fascinated. If I was alive back in the days of traveling carnivals and sideshow's I would be front row at them every time they rolled through my town. I don't know why I'm this way, I'm just being honest here in the circle of trust.

So yah, you show me a south American woman with aerobic balls attached to her chest and spiderweb tattoos all over her face and tell me she caused a fracas aboard an airplane I'm going to bite and pass the savings on to you 101 times out of 100. Sorry not sorry.

Lastly, and most importantly, can we as a society, PLEASE, please, please I'm begging us, stop referring to every single woman who posts pictures on Instagram as a "model"?

Just because I shoot hoops at East Bank Club doesn't make me a basketball player.

Just because I can cook an unbelievable bolognese that will knock your dick off, from scratch, doesn't make me a chef.

(Sidebar - When I first saw this picture this is the song that immediately started playing in my head.

There's obviously some sick twisted correlation between scary chicks and scary music I'll have to talk to my therapist about but at the same time credit to my brain for the quick thinking on the perfect song for the perfect situation. )

p.p.s. - I've said it once and I'll say it a billion times. Anytime Toronto (The Good) is mentioned in a blog, and I have an opportunity to reference it, Steve Spiros will be there. That's my blood oath, guarantee to you.