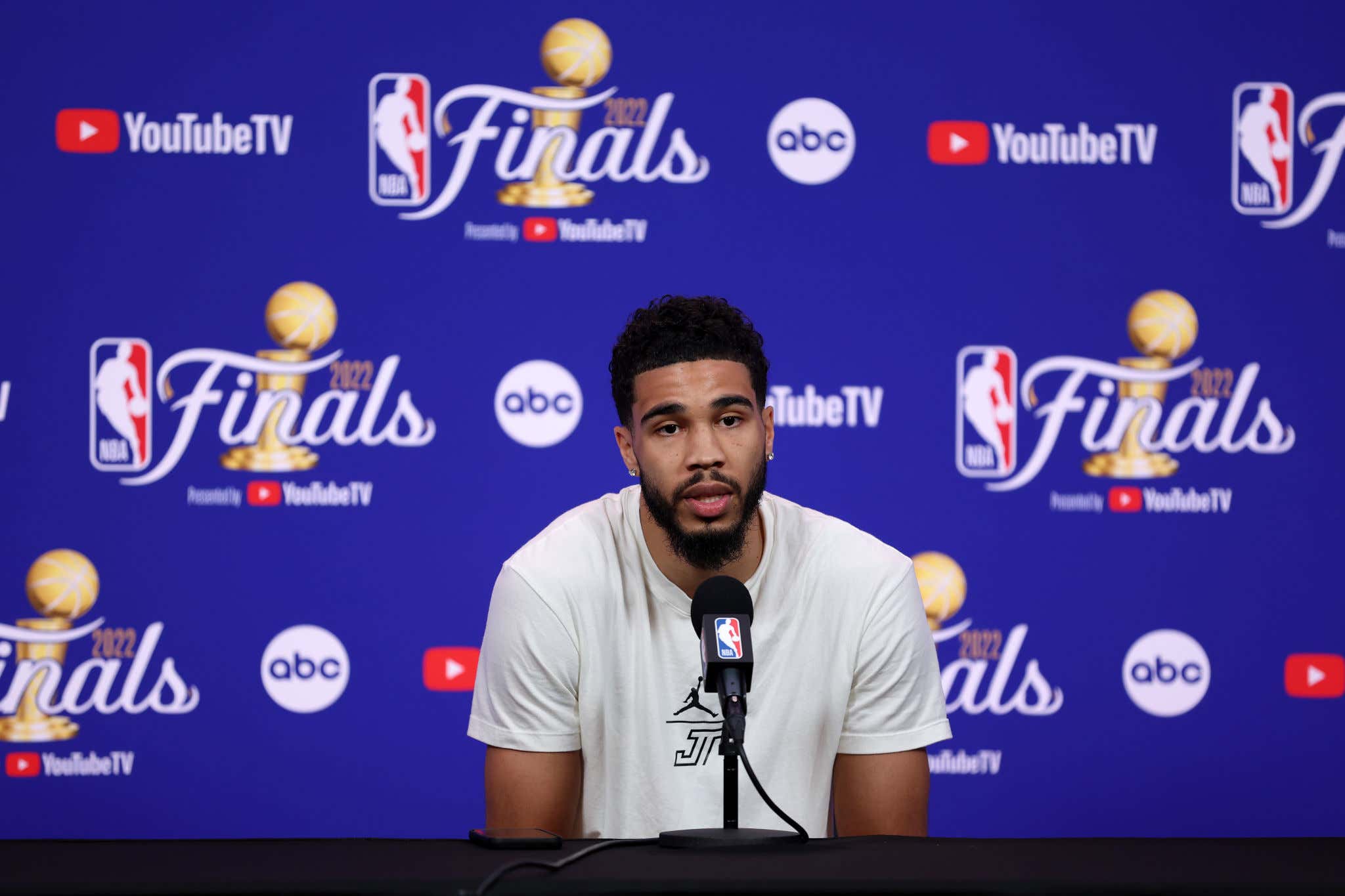 Like many of you I'm sure, I've been trying everything I can to find ways to fill the time until tip off. As of the writing of this blog, we have around 5 more hours to go. I don't know who controls the rotation of the earth's axis in relation to the sun (shoutout Google) but it feels to me like they are taking their sweet ass time. 24 hours my ass. I feel like it's been much longer than 24 hours since we all woke up this morning. I can't back that up with actual data, I'm just telling you what my heart feels.

I don't know what has gotten into Tatum this year, but he's turned into one of the best interviews going. Early in his career, he never really said much. Now? He's open. He's candid. That clip right there might have been the most honest and open I've ever heard Tatum be. There were no boiler plate or cliche answers. There was just brutal honesty. In an environment where this sort of talk about self doubt and uncertainty isn't exactly encouraged, I think most logical people will agree it shows true growth and maturity. Personally, I've never doubted if Tatum was the right guy to lead this team. One of my biggest pet peeves in life is the whole

debate that always seemed to follow him because he was never really animated. Like, not everyone is a psycho like Kevin Garnett. In fact, I would argue nobody is a psycho like KG. That doesn't mean you can't be a leader. How many times during the Celts struggles did you hear that Tatum "didn't really want it" or that "Tatum doesn't have what it takes to get over the hump". I'll answer for you. All the fucking time.

When you think about this Celtics run, so much of it is based around the sense of relief. Those of us who believed in this team even during the dark days are relieved that our love and trust has been validated. The organization probably feels a sense of relief in its commitment to the core. The players certainly must feel relief in the fact that they finally got over the hump, and I'm sure Tatum specifically feels relief. As the franchise guy, everything will always come back to him. I think that's probably why he feels so comfortable talking like he did in that clip. Had the Celts blown Game 7, I don't think we get that same quote. The reality is, he is good enough. He is the right guy to lead this team. That narrative can finally be put to rest forever.

If there's one person's opinion who I value when it comes to this stuff, it's Cedric Maxwell.

That's a guy who knows what it takes to get it done on the sport's biggest stage. He saw first hand how true killers like Larry Bird operated.

You have to remember, Tatum is just 24 years old. It seems crazy not just from a talent perspective, but his whole mentality and vibe. He may as well be 30 when you listen to him talk this season. He's developing into everything we hoped for when they first drafted him. He's battle tested. When this team has needed him, Tatum has stepped up and delivered. Time and time again.

I think what we're learning is that being a leader is about more than what you do on the floor. It's everything, including self reflection. Seems like Tatum has checked off that box as well, which should only have you even more excited for what the future might have in store.

But for now? It's time worry about Game 1. All I know is that as long as this team has Jayson Tatum on their side, they'll always have a chance.