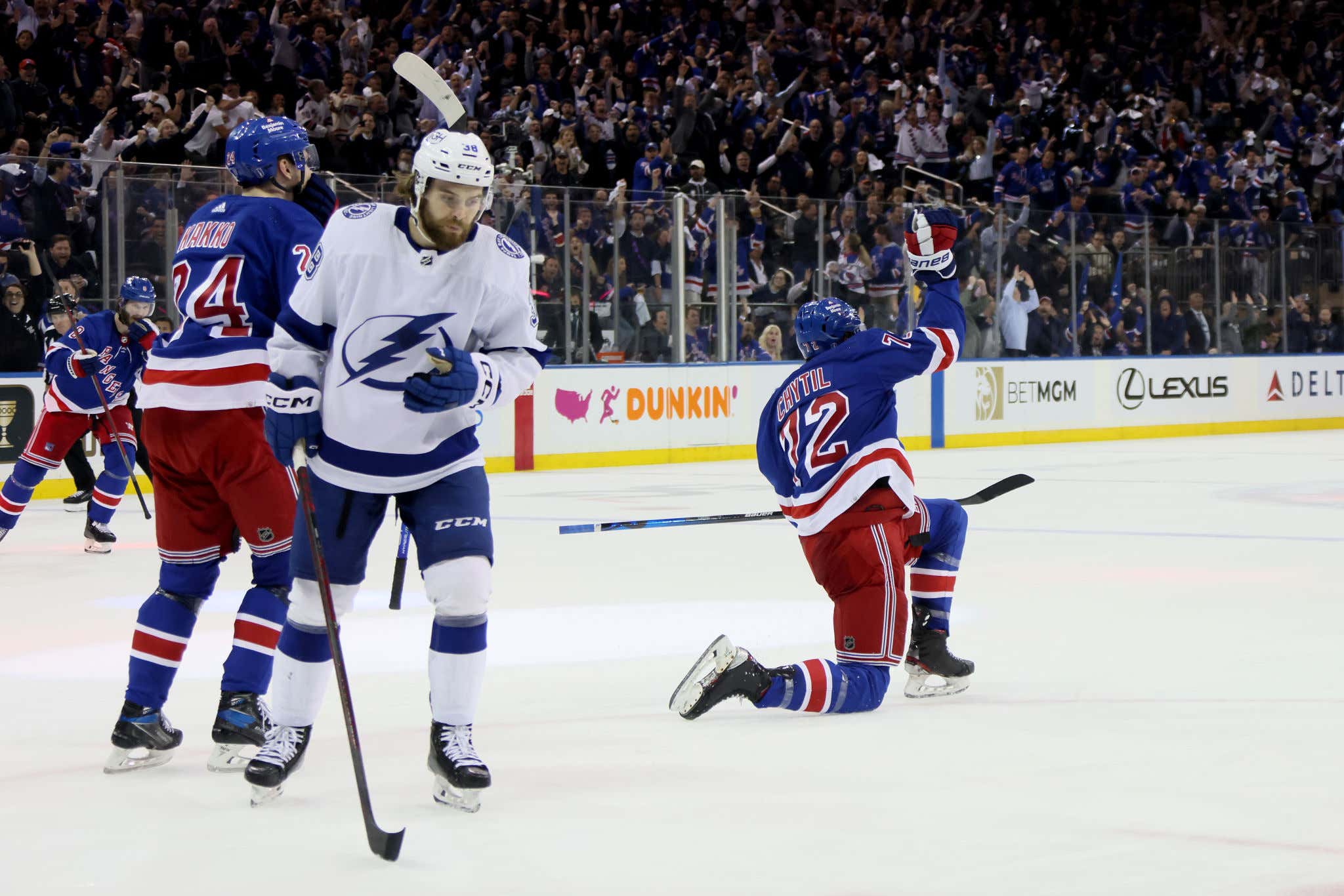 I was told this wasn't gonna happen. The Rangers lucked into the ECF thanks to goaltending injuries and were in for a rude awakening with Vasilevskiy up next. Yet here we are just a game into the series and the reigning Conn Smythe winner has given up twice as many goals than he did all series vs the Florida Panthers. The most he's allowed in a single playoff contest for his career. So all I've learned tonight is that if the Blueshirts faced "real" goalies in the first two rounds the only difference is they'd be a lot more rested for their battle with the Lightning.

It took all of 71 seconds for Krieder to break through on Vasilevskiy thanks in large part to a Zibanejad shot fake that sent both TB defenders sliding completely out of the play and into the boards. The defending champs controlled a lot of the play after though and a Stamkos bomb evened the period at 1. There was reason for Rangers fans to be nervous headed into the second - but a white-hot Chytil buried a pair as part of a 3-goal NYR outburst to take a commanding lead they'd only expand upon in the final frame. This kid is scoring out of his mind right now with 5 in his last 8 periods and looks like a totally different player, oozing strength and confidence with the puck. It's been an incredible transformation.

Just an awesome effort from top to bottom. All the big names on the scoresheet along with the kids. A few impressive hustle plays that stuck out, none better than Vatrano busting ass on the backcheck to slap a 2-on-1 mid-air slot pass out of harm's way before sniping the GWG soon after. A little bit of sandpaper exemplified by Lafreniere doling out facials with a Kool-Aid smile on his 20 year-old grill. The powerplay cashes in yet again and the PK thwarted all four of the Lightning's chances. Last but not least, another stellar performance from Shesterkin with 37 saves. Igor has ceded more than 2 just once (3) in his last 8 games.

Blame "too much rest". Blame Point being out or whatever the hell else you want. Fact is, the Rangers proved they belong and they proved it with authority. This series is obviously far from over. It's just one game. The Bolts will scrap tonight and forget it with ease. But just because they'll be better doesn't mean they're not in for a fight - a fight they still may very well lose.