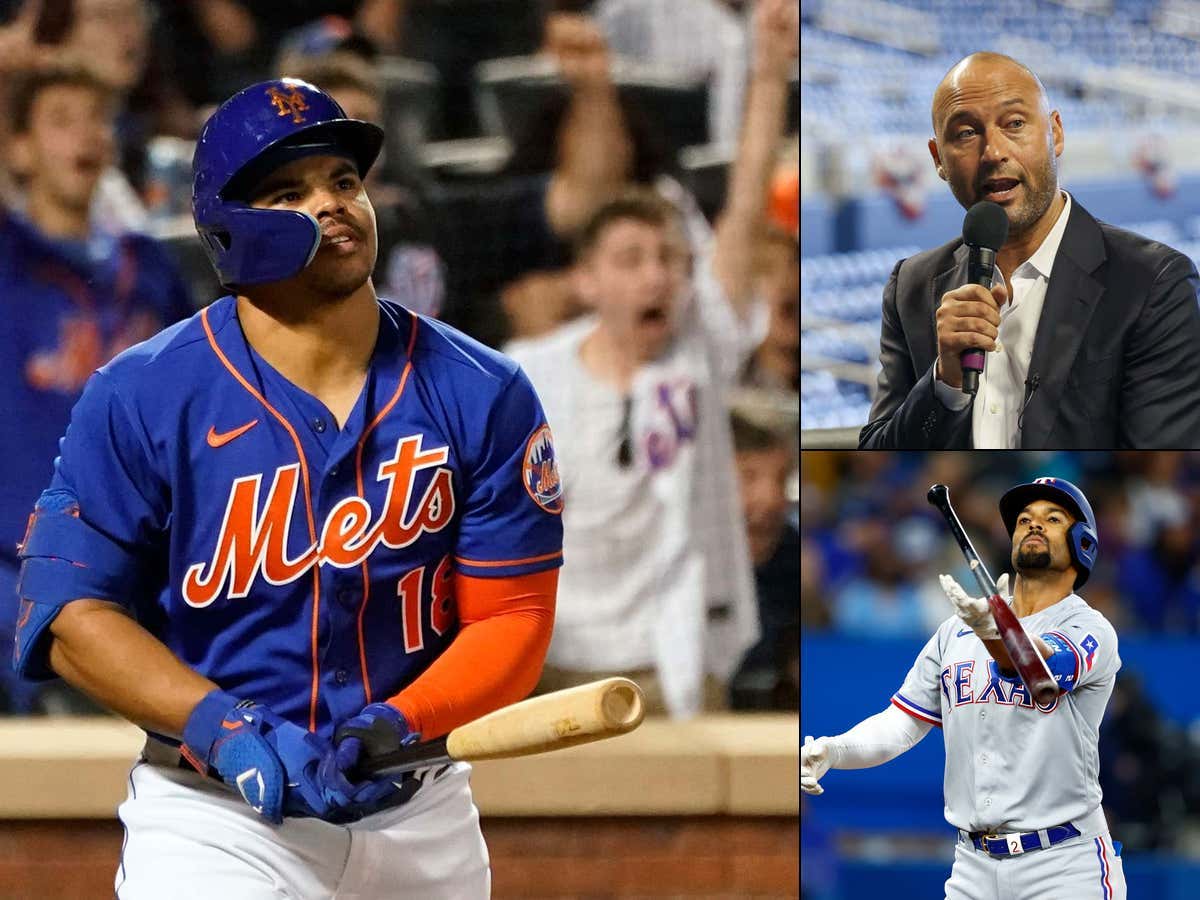 We're back after a long Memorial Day Weekend that saw the boys from Starting 9 doing a bunch of different shit. Episode 007 should be out momentarily so go check out the new show and our weekend round up. Power Rankings, Weekly Awards, Division Standings and a bunch of other shit is on the table.

The big takeaway through 2 months is that there's definitely enough baseball out there to draw some conclusions. There's statistical validity to your emotions. We're long past the point of blaming no spring training and a weird start to the year. Enough time has passed to settle in so let's do just that and get a look at the MLB Standings: 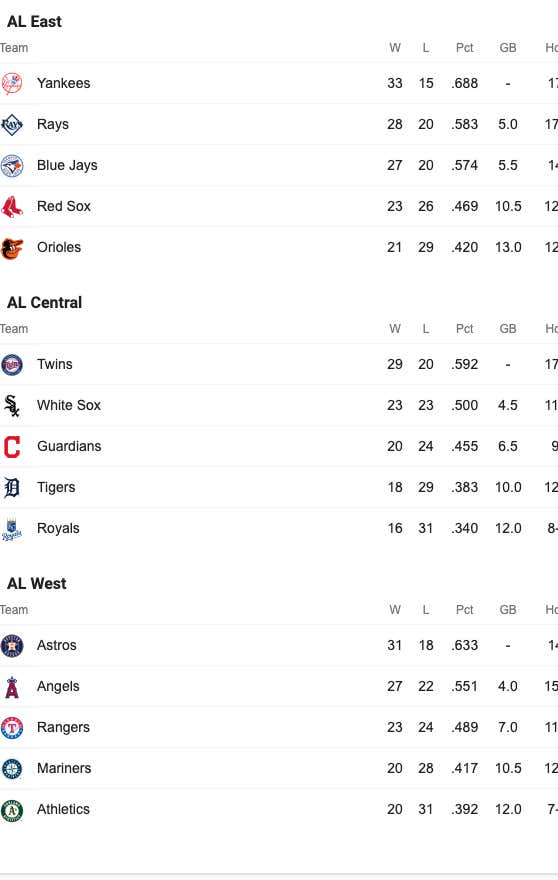 - To me the AL is really only interesting in the AL Central because the White Sox have been so bad vs. expectation. We're talking about a team that should be in the tier-1 with the rest of the big boys but the bats can't get going yet. There's injuries and depth issues and position issues. But the 1-3 is good enough to match up with any lineup in any playoff series. How much longer until they get it fired up and start rolling off big streaks? The Twins have been solid & steady with an underwhelming Correa relative to his potential. Mix in a tough 9-game stretch for the CWS and we could be having a more serious conversation later next week if they don't turn it around.

- The Yankees starting pitching has been good enough to let the lineup run away in the division despite two very good teams below them in the Rays and Blue Jays. I think there's more competitive balance later in the year but right now I see the Yankees settling into a touchdown lead in the standings for at least another couple weeks

- Different year, but similar vibe to the AL West. It won't be late August until someone starts running into the Wild Card aggressively per usual. The Angels need to fight for dear life in June because the Astros staff isn't slowing down any time soon. 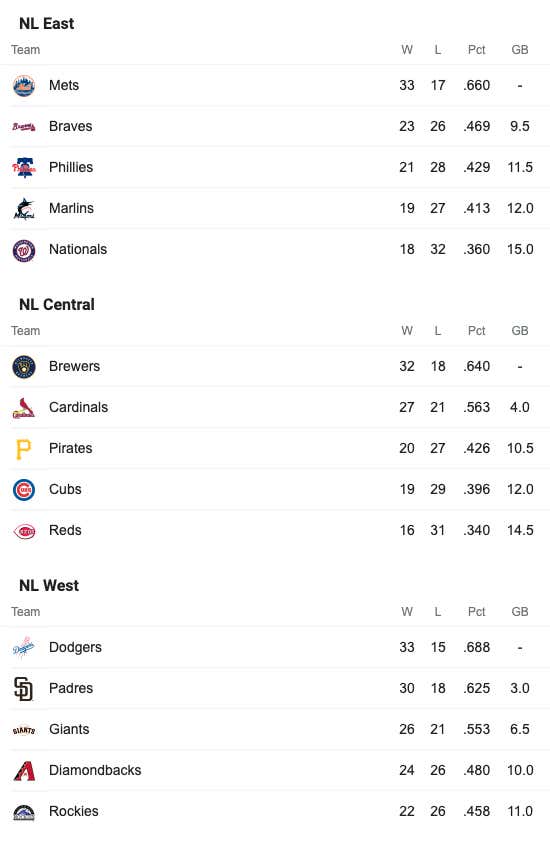 - At this point I just want to see the Mets struggle so we can mess with Colin on Starting 9. That's becoming one of my favorite things and it's well deserved because the Mets are that much better than everyone else. You'll hear below about why they have so much magic. At least enough to make it a non story talking about any other team in the division.

- The Padres would be so much better off in any division. Truly one of the bizarre scenarios where they fit as a top-5 team but clearly behind the Dodgers in their division. 3 games is obviously small but can you honestly see the Dodgers slowing down at any point? Their run differential is +118 through two months and the next best teams are the Yankees and Mets at 71 and 62 respectively. There's enough context to slowdown whatever point of mine you want to argue.

- Finally - the best race all year will belong to the Central because you have two completely different successful clubs slugging it out with absolutely no competition from the rest of the division. It's two good teams and three very below average clubs. Sure that sounds simple but the point is the division will be decided mostly by how the Cards and Brewers play each other. The winner of the season series will very likely end up with the division title.

- Big picture and my own personal takeaway from the standings is you can't win the division now, but you can certainly lose it. Hanging onto .500 baseball the next couple weeks isn't a horrible goal for your team. You're starting to see injuries pile up and new faces and slumps and story lines pick up. It's a popular time for parity in the game as we head into June and I think people forget that.

The Slap Heard Round The World:

Go listen to Starting 9 today and you'll get a full bodied breakdown. My point for now is that we can laugh at Tommy Pham all we want, but there's 100% going to be some guys in the Reds clubhouse that like the fact he slapped a San Francisco Giant in the face. Obviously a stupid move. Obviously the kinda thing that gets you blackballed from the league. But also the kinda thing some of the Old Guard around the game will always like - and that's mixing it up with your competition. My verdict is he's a loose canon but the kinda loose canon you want on your side.

Also worth mentioning that Joc won our Due of the Week award largely for how well he handled the situation. Bizarre all around and extremely sensitive stuff from Tommy Pham. But again - deep down there's some people in the Reds clubhouse that love the controversy. And who knows, maybe Pham channels the aggression and starts dropping BOMBS, which reminds me:

115mph exit velo with a 31 degree launch angle on Monday afternoon in Colorado = 496 feet. And with that the Vegas prop for longest homer of 2022 has been decided. Good handicapping on the 495.5 but the over cashes. Just an incredible bomb from the 24 year old outfielder.

If we're talking homers though, nothing is more entertaining the Nick Castellanos when the broadcast starts to get serious. He has an innate sense of when to lighten the mood and it's on display again. He's becoming a folk hero on that front. The game can be so hard that it really forces humility and a relentless approach to adversity. Otherwise you can find yourself in dark places trying to find success without a shred of hope and that's where you really challenge yourself as a ballplayer AS THERE'S A DRIVE INTO DEEP LEFT BY CASTELLANOS…

You don't need an MIT degree to see those numbers are off the charts. We talk about his approach on Starting 9 today and that includes how Jake tried to gameplan for him. Fascinating stuff behind one the leagues most consistent and thunderous bats.

Also fascinating to watch Nolan Gorman play in the big leagues. He's roasting the baseball as a top prospect but he's also striking out at an alarming rate. Yes, the .387/.472/.677 slash is obviously outstanding. Just consider that mostly comes from 5 of his first 10 games. The other 5 games? 0-14 with 9 strikeouts against 1 walk. So best player or worst player kind toss up right now. You'll see that meet in the middle over time, but just a crazy ass start to his career. Guy looks incredible.

The Red Sox did not this weekend…

The Red Sox were super hot going into a 5-game home set with the Orioles that could see them finally crawl back into the competition with the Rays and Blue Jays. All signs pointing up but they drop it 2-3 with a humiliating loss on Monday night to cap it. That's tragic for the Red Sox because there just isn't that much room to fuck around even if it's still May and there's tons of baseball left. You can't control every game but there's almost no way you can go out and lose game 5 like they did yesterday.

Are The Dodgers Human?

This isn't a major story. Just want to point out that the Dodgers are capable of losing baseball games to much worse teams. Something to remember when you see the Pirates +270 tonight.

Nicky Plummer Has The Bag Of The Week

Spoiler on award season for today's episode, but Nicky Plummer is our bag of the week. He's a Brother Rice (Michigan) guy which I love. First rounder to the Cardinals 6 years ago and finally gets into the big leagues after some crazy challenges. And of course, he instantly delivers which can only make it seem like this Mets team really is made for destiny.

Worth pointing out he also uses the Super Mario Bros. song for the walkup. Plummer & plumber. Get it? It takes some warming up to, but overall I like it. Welcome to big leagues Nicky.

Speaking of warming up…

What a moment for a guy that thrives on the momentum. He hasn't gotten it yet and there's still hope for a turnaround. But 2 months in, Semien absolutely looks like a wreck.

He's been much better over the last two weeks hitting .306 with a .770 OPS. The power numbers aren't there but every advanced metric is up on the batted ball scale. End of the day it's still a major league hitter with a major league swing and loads of success to his name. I trust him to get it going.

Ben Mintz, I Do Not:

The Mintzy tour makes a stop on Starting 9 today with Jake breaking down his mechanics. He's extremely heavy on his front side because he needs to cheat the fastball. No rotation. No balance. Just really committing to cheating on the velocity and hoping for a good outcome. Mintzy means well but that's the perfect kind of approach to exploit.

Fortunately we'll all be in Omaha together in a couple weeks to sort this shit out and take in the College World Series. Keep your eyes peeled on social for the next big stop on the Mintzy Tour. Also keep a look out for Jeter now that he's one of us.

Look I know he's on IG and other social platforms too but you guys also know that Twitter is the real announcement. That's where the chaos lives. Nobody really cares about the IG profile from a newsworthy standpoint. But get the people going on Twitter and it's a completely different game. On that front, welcome Jeter. I'm sure everyone is going to be super nice and polite to the hall of fame shortstop.

It also means he's now at the top of my list for Starting 9 guests. Go subscribe to the show so you don't miss his debut.

The link will take you to your preferred podcasting app.