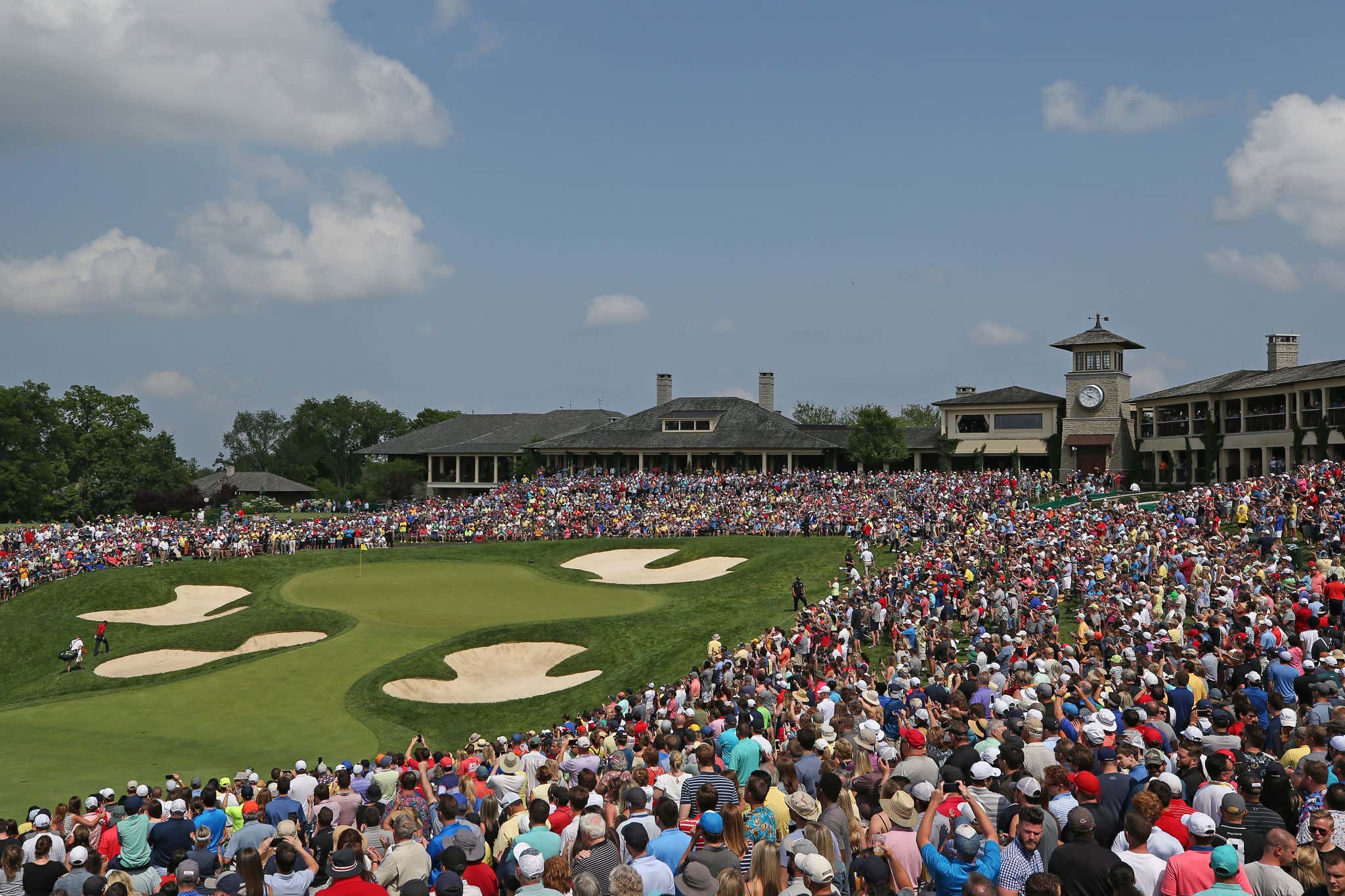 Welcome to Jack's Tournament, which for my money is a top 10 tournament of the year. You've got the 4 majors, you've got THE PLAYERS, and then you've got a mix of tournaments including WGC's and East Lake to fill out that back half of the top 10. I think this is firmly in that group. It's an invitational field that draws most of the world's best, it's a phenomenal course that presents a great challenge for them, and it's all overseen by the 2nd greatest to ever do it.

Also, shakes. You're gonna hear a fuck ton about milkshakes and handshakes.

Last year's tournament featured one of the most shocking moments in all of sports in 2021. Jon Rahm, who was world #1 at the time and defending his 2020 title at this tournament, walked off the 18th green on Saturday with a dominant 6-hole lead only to find out that he had tested positive for COVID and was forced to withdraw.

It almost assuredly cost Rahm a trophy, along with millions of dollars in prize money not just for this tournament, but in the FedEx Cup Playoffs. It also likely cost him the PGA Tour Player of the Year award, which I wrote about here.

Patrick Cantlay went on to win the tournament in a playoff against Collin Morikawa, who both finished at -13. So as you look at this leaderboard, let it be known that Rahm was -18 after a Saturday 64 and should be going for a threepeat this week. 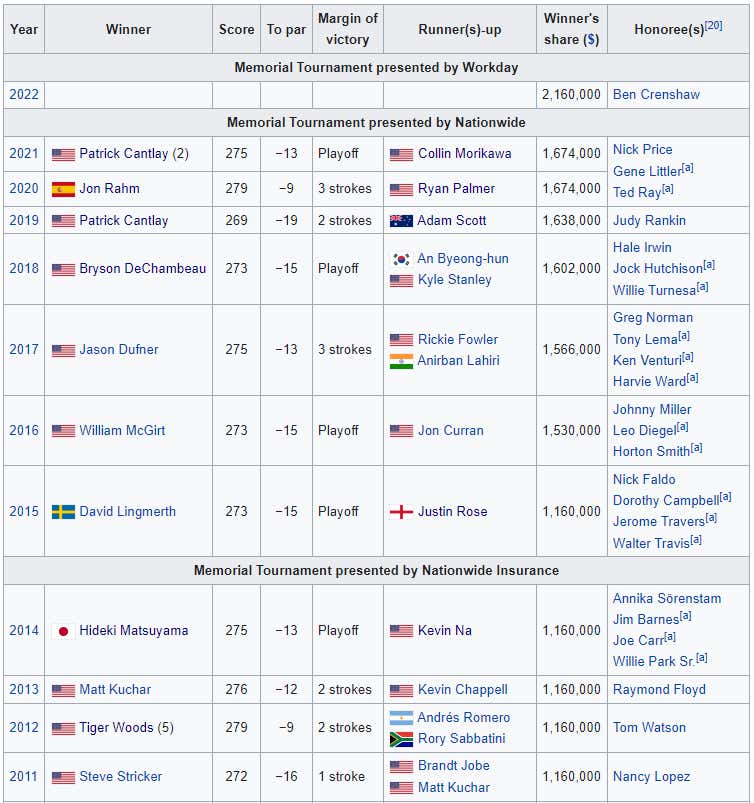 Muirfield Village was built in the 1970's by Jack Nicklaus near his hometown of Columbus, Ohio. It was named after Muirfield in Scotland - where Jack won the first of his 3 Open Championships. It has hosted the Memorial since 1976 and has been a mainstay on Tour ever since. The guy wanted to make this place a test for the world's best - and he still does. He nearly went broke investing in this place back in the 70's and now it's one of the most affluent golf communities in the country. He's constantly tinkering with it. Last year he had the green complexes completely rebuilt. Some of these greens were some of the most undulating on Tour, nearly rivaling Augusta National. Players have already been talking about the challenge that is re-learning some of the slopes and how to attack these greens. Here's Jack summarizing some of those changes:

One thing that you can always count on at Muirfield Village is that the rough is going to be absolutely gnarly. You'll see all kinds of balls disappearing into this stuff if it's off the fairway. The course isn't overly narrow, but you can't just spray it all over this place because this rough will catch up with you. Especially if the layout is a bit different than how it was played in years' past. 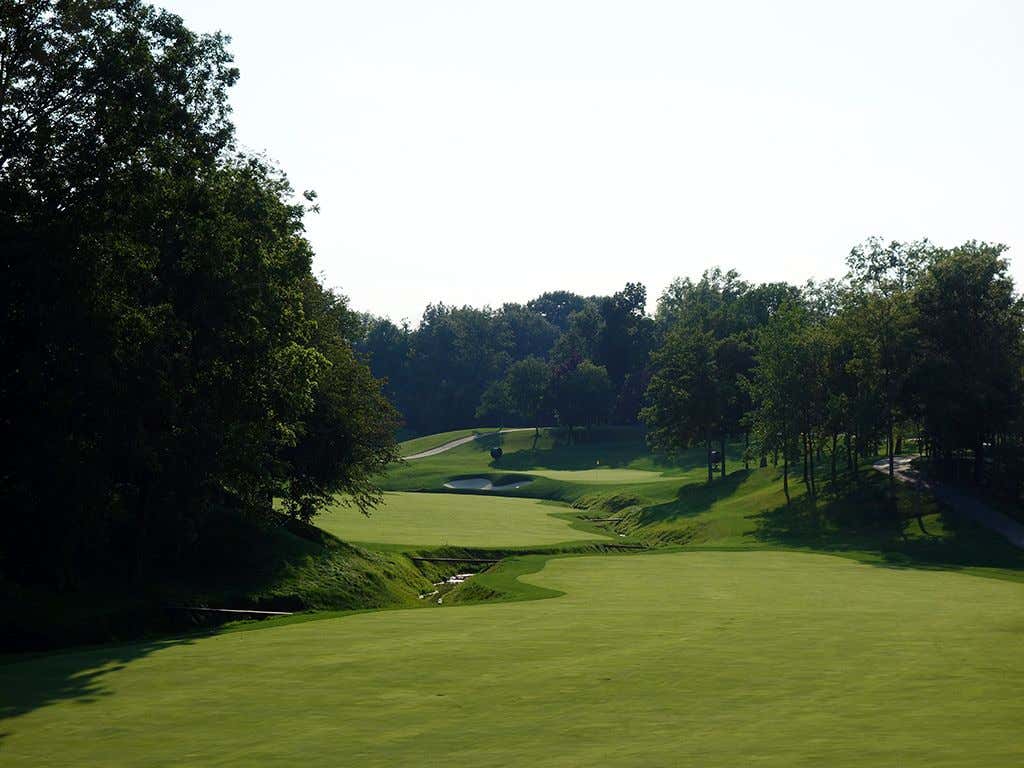 Absolutely sick par 5 that snakes from right to left and back right at the end. Perfect set up where if you drive it in the right spot, you're presented the opportunity to take aim at the green in 2 and score. If not, you're laying up and it's a 3 shot hole.

Not much to say about this kind of weather. 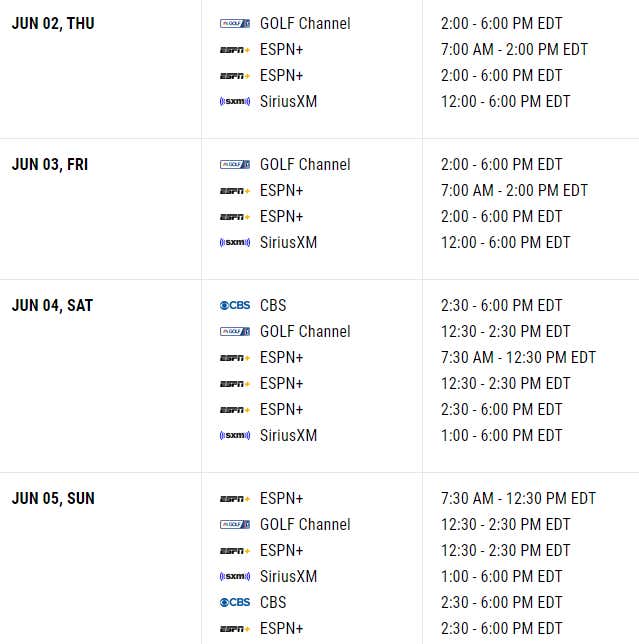 Nantz wouldn't miss an opportunity to chop it up with Jack on a Sunday for the world. CBS it is.

As if I need to explain why, Jon Rahm is the favorite at the Barstool Sportsbook at +850. You can also take him, Spieth, and Zalatoris all to make the cut at a boosted +110.

Spieth is 8 for 9 on making the cut here (including 6 top 20 finishes), while Will Z missed the cut in his only start here back in 2018 when he was fresh out of college. Given the player he's become, I'd expect him to not only make the weekend but also have a late tee time Sunday. So yeah, I'd say that +110 is a pretty sweet deal.

This is a rare situation where I like the favorite a lot. Or at least enough to start a betting card with Jon Rahm at +850. Call it a hedge strategy, call it chalk, I don't care. Rahm obviously knows what he's doing at Muirfield Village.

With that said, I also love Collin Morikawa as a value at +2200 this week. He lost the playoff to Cantlay here last year, but also won at Muirfield when the PGA Tour went back-to-back weeks here during COVID. The RBC Canadian Open was canceled, so the Tour threw together a replacement event called the Workday Charity Open in 2020 the week before the Memorial. Morikawa beat out JT in an exhilarating playoff. He finished T-48 the following weekend at the 2020 Memorial, but backed it up with the playoff loss to Cantlay in 2021. That's enough to show me that he likes the course. Plus… he's Collin Morikawa. He's the 4th ranked player in the world and he's got the 9th longest odds in this field. Even if Cantlay is a 2-time winner at Muirfield, him going off at nearly half Morikawa's number is asinine.

Morikawa (-114) over Hovland Tournament H2H - Hovland's history here is T-47, T-48 with a solo 3rd in the Workday Charity Open. Not terrible but not enough to not take Kawa in a pick-em.

Hideki Matsuyama Top Asian +200 - Former winner here and won a WGC at Firestone CC a few years back, which is another Ohio course we used to see on Tour often.

Tom Hoge To Win +10000 - Ball-striking longshots have won here before, and Hoge is 7th on Tour in Strokes Gained:Approach this year.

Will Zalatoris To Win +2800 - Will is officially the honorary Tony Finau FOMO "bet until he wins" guy. Ride or don't.