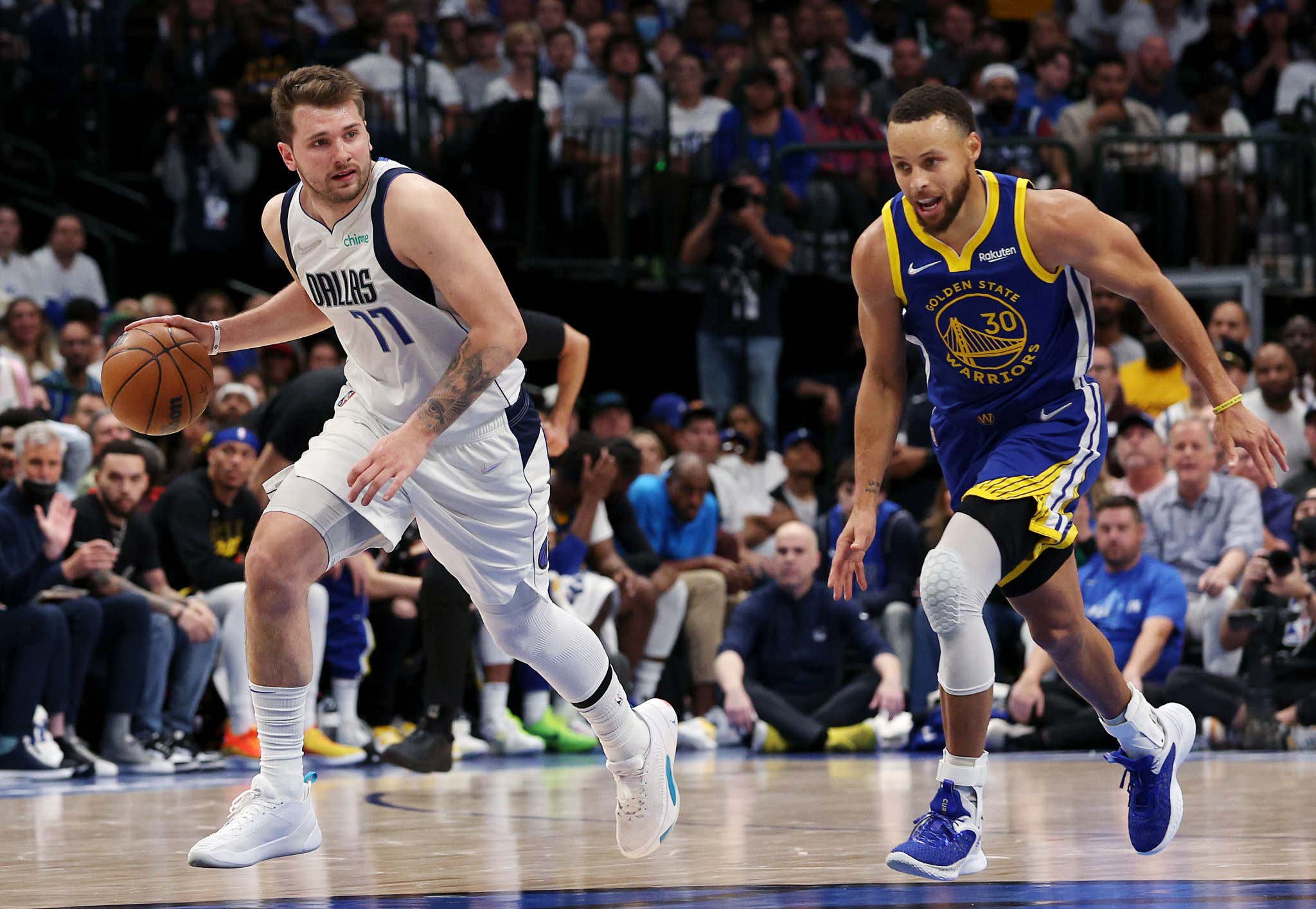 I could've saved the following anecdote/trend for the "Plays of the Day" section, but I feel like gassing myself up. I'm the new guy after all, and comparatively few people are reading my betting previews compared to other shit. I know I'm destined to crash back to Earth very soon, yet we might as well revel in whatever small victories life offers us when we can.

So here goes: I'm on a 14-3 run on the spread/moneyline and Over/Under in the NBA Conference Finals. I've correctly predicted the total points line in ALL NINE NBA Final Four matchups to date this year. I will say: Player props haven't been as kind, but in Game 2 of this Warriors-Mavs series, Stephen Curry and Luka Doncic hit their Over point totals, and Jalen Brunson hit Over 3.5 assists for a perfect night.

Anyway, moral of the story is: Fade my hot streak tonight, or keep riding with me. No offense taken either way. On to Mavs-Dubs Game 5, where Golden State will try for a second straight time to knock Dallas out and qualify for the NBA Finals.

When Luka is in desperation mode, watch out

Luka Doncic's scoring line is set at OU 34.5 points. That may seem too high. Then you realize what this man is like when his run in the NBA playoffs is on the brink of concluding.

Luka averages 36.4 points per game when elimination is at stake. No matter what's going on, he's going to go down swinging, or shooting for a more apt sports analogy. Sphincters are going to tighten. The pressure is on for the Warriors to finish the Mavs off and avoid a Game 6 back in Dallas before the media runs wild with "ALL-TIME PLAYOFF COLLAPSE IMMINENT!?!?" narratives.

I feel like Luka is at his best when he doesn't give a fuck. He generally has that carefree demeanor when he's playing anyway. That might be more on display in Game 5 than ever before. The potential embarrassment of being swept has now passed. You can honestly say Luka is playing with house money now. Question is, will Luka's presumed brilliance be enough to extend this series? I'd say, "Most likely, no."

Warriors' strong home form has carried over to the playoffs

Golden State (-7) is tied for second with Dallas in terms of home ATS record with a 29-18-2 mark. Where the Dubs separate themselves is point differential: +10.7 to the Mavs' still-impressive +6.7. On the road, Dallas has a negative point differential (-0.7). I know these might seem like simplistic figures, but I'm more focused on the Warriors' penchant for blowing out their foes in the Bay Area by double digits. They're 8-0 at Chase Center in the playoffs, too.

I'm all for a competitive Western Conference Finals and what not. It's hard to turn away from Golden State, though, considering its core of Stephen Curry (OU 39.5 pts, reb, ast), Klay Thompson and Draymond Green have won three championships. They've been on this type of stage many times before and come through. Plenty of experience dealing with losing and adversity.

Quick note on Curry: In those three title wins, he didn't achieve Finals MVP once…might be a good idea to jump on him while you can. He'll almost certainly be a pseudo-ceremonial pick if the Warriors lift the Larry O'Brien Trophy again.

One silver lining to the Warriors' latest loss was the fact that their bench was responsible for a valiant comeback effort, ultimately leading to seven of their players reaching double figures in scoring. All playoff reps are valuable, particularly for the younger guys on Golden State's side who'll someday have to step in for Steph, Klay and Dray. Beyond the obvious supporting players like Andrew Wiggins and Jordan Poole, I'm interested to see how the likes of Jonathan Kuminga and Moses Moody respond if they're called upon for the remainder of the postseason. Playing in front of friendly fans should only help them for Game 5.

Points in the paint should still be a point of emphasis for Dallas. The late-game rally by Golden State's reserves distorted the PITP battle that the Mavs were actually winning thanks to a greater inclination to drive to the basket and score at close range. Those journeys down the lane also continued to open up quality looks from beyond the arc, as Dallas hit 20 3-pointers in Game 4's win.

If you're thinking the Mavs need to keep relying on the long ball to keep their hopes alive, I don't think that's necessarily true. They can more effectively tax the Warriors by not always taking the uncontested 3-pointers and instead, using their leverage in those instances to crash toward the basket for higher-percentage looks at a closer range.

Improved overall efficiency on offense, ball movement and diversification of their attack seemed to enliven the Mavs in Game 4 in a way they hadn't been throughout the Conference Finals. They weren't flat like in the other three defeats. Their energy was a strong complement to the defensive end, where Dallas made a greater push to crash the glass and outrebounded Golden State for the first time all series.

If the Warriors have another sizable advantage on the boards and in PITP, Game 5 is going to be a blowout. The Mavs need to at least put a dent in the Dubs' clear superiority in those departments to have a chance at netting some lucky bettors a +250 moneyline winner.

All signs point to a low-scoring, ugly affair

The Under and Over have traded off in each of the four games so far. By that logic alone, we're due to hit the Under again tonight. Expanding the sample size a bit, though, pretty much every season-long trend is point in that direction, not to mention what generally happens later in the playoffs when teams actually give a fuck about defense. Look no further than last night's 93-80 eyesore of a victory the Celtics pulled off in Miami.

With the total points line set at OU 215.5, the Under (-109) has less juice and seems like the right play. I haven't dedicated a full section to this before, and I know I'm jinxing the ever-loving shit out of myself. Still, bear with me here. At home, Golden State ranks third in the NBA with a 28-19-2 mark vs. the Under. After a win, Dallas leads the league at 37-22-1. As an underdog, the Mavs have gone 26-18 against it, and with one day off, their Under record goes to 43-23.

If you're a Dallas fan and this dismays you, in the past two contests in which the Mavs have been eliminated from the playoffs, Luka posted the following lines: 38-9-9 and 46-7-14. Went certifiably bonkers on both occasions. Those losses were by 14 and 15 points respectively against Clippers teams led by a proven, multiple NBA champion in Kawhi Leonard.

The circumstances aren't dissimilar on Thursday. This time, it's not the Orlando bubble or a 39% capacity crowd in LA. It's a full house at Chase Center in San Francisco. you can bet Golden State will be playing angry after failing to close out the Mavs and denying themselves extra rest before the NBA Finals. Part of me thinks this could get ugly, more like Game 1's 112-87 score than anything else. I'll go…107-98 out of respect for Luka and the Herculean effort Dallas has put forth to even get to this point.

I'm only going with one player prop wager since, like I said, it's been a rough go lately. Luka managed 30 points in his last start despite shooting 10-for-26 from the field. It should be a different story this evening. He's not a bad bet for a triple-double at +350, either. I just don't think his teammates are as prepared as him to thrive in such a hostile environment with literally all the chips down on their entire season.