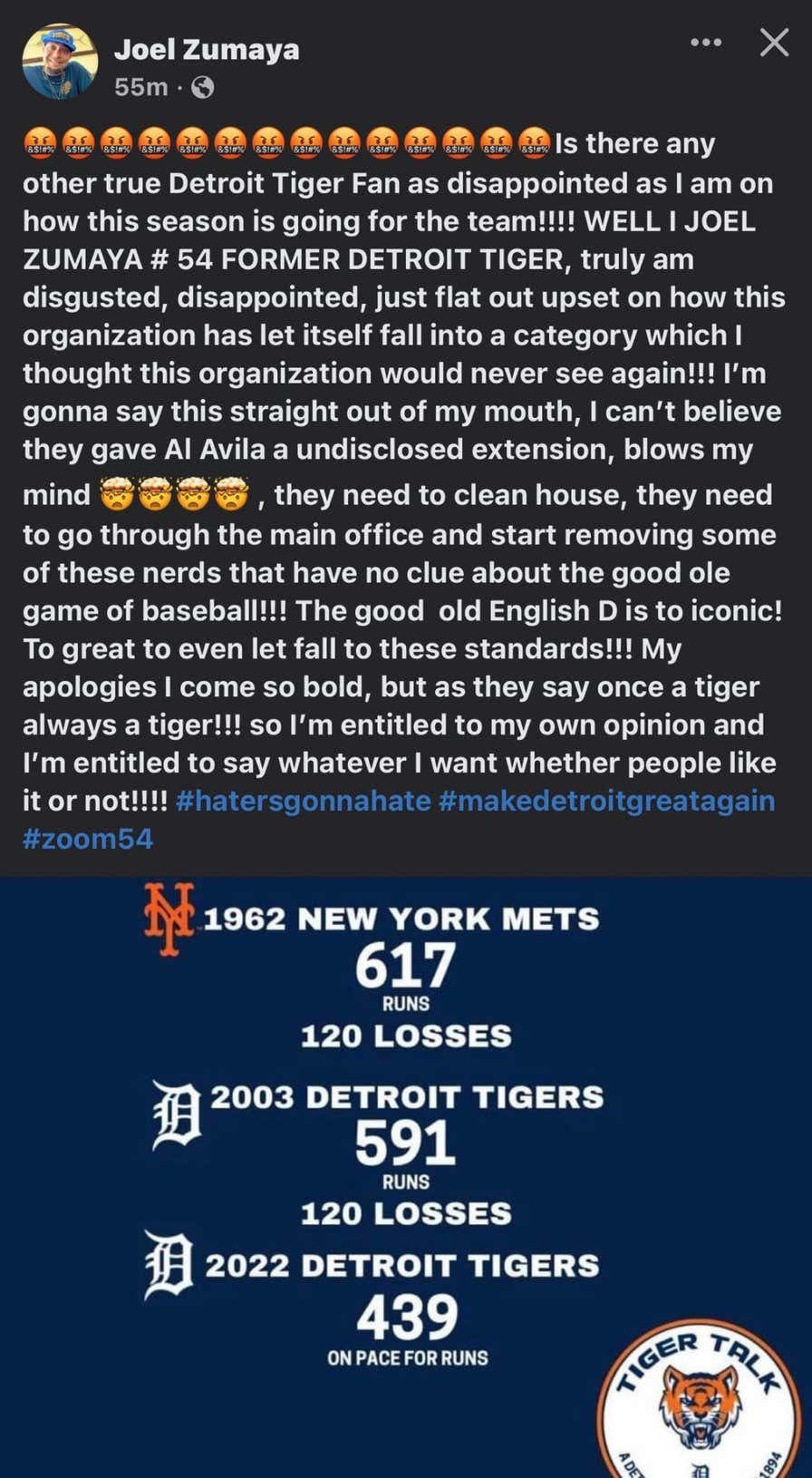 Good for Joel Zumaya, man. Believe it or not, there was a time when the Detroit Tigers mattered. From 2006 to 2014, they were actually competitive. They had good players, spent money, and got fans to the park. They didn't win a World Series, and they should've, but it was still fun. And Joel Zumaya, a pitcher whose star burned out way quicker than it should've, mainly due to some bizarre injuries, including one in which he hurt his wrist playing "Guitar Hero," was at the forefront of that in 2006. And while I'm not someone who necessarily agrees that we need to "start removing some of these nerds that have no clue about the good ole game of baseball," I'm glad that former players are starting to share the same frustrations we fans are sharing.

It is hard to accurately convey just how god-awful the Detroit Tigers are right now. The pitching has been more than passable. Considering the injuries (four of five Opening Day starting pitchers are on the injured list), this is still a team that ranks 11th in baseball in ERA. That unit has held up, which makes this season even more frustrating because a slightly below-average offense would probably have this team around .500. That will not be the case because this team's offense is an abomination to the sport.

Detroit's offense right now can be one of the worst ever. That's not an exaggeration. I was on Twitter spaces last night in which my buddy told me that the 2010 Seattle Mariners, a baseball team that Dave Schoenfield once referred to as the worst offense of all-time, averaged a ridiculously low 3.17 runs per game. As of the time of this blog, the Tigers offense is averaging 2.71 runs per game. This baseball team is currently on pace to shatter the record for the fewest runs scored in a 162-game season. The best, most consistent hitter in their lineup is Miguel Cabrera, who currently has 16 runs batted in in 37 games played. By comparison, Trevor Story has the same number of RBIs over his last five games. I know that batting average is a statistic going out of style for a while. Still, today, the Tigers lineup features five players with batting averages under .200 and another player in Derek Hill, whose average sits at exactly .200. They have hit twenty-two home runs ALL-SEASON. That is pain personified, and quite frankly, I'm angry at myself for ever thinking this offense might be okay. So yeah, good for Zumaya for ripping this team to shreds. Maybe one day, the front office will start listening.