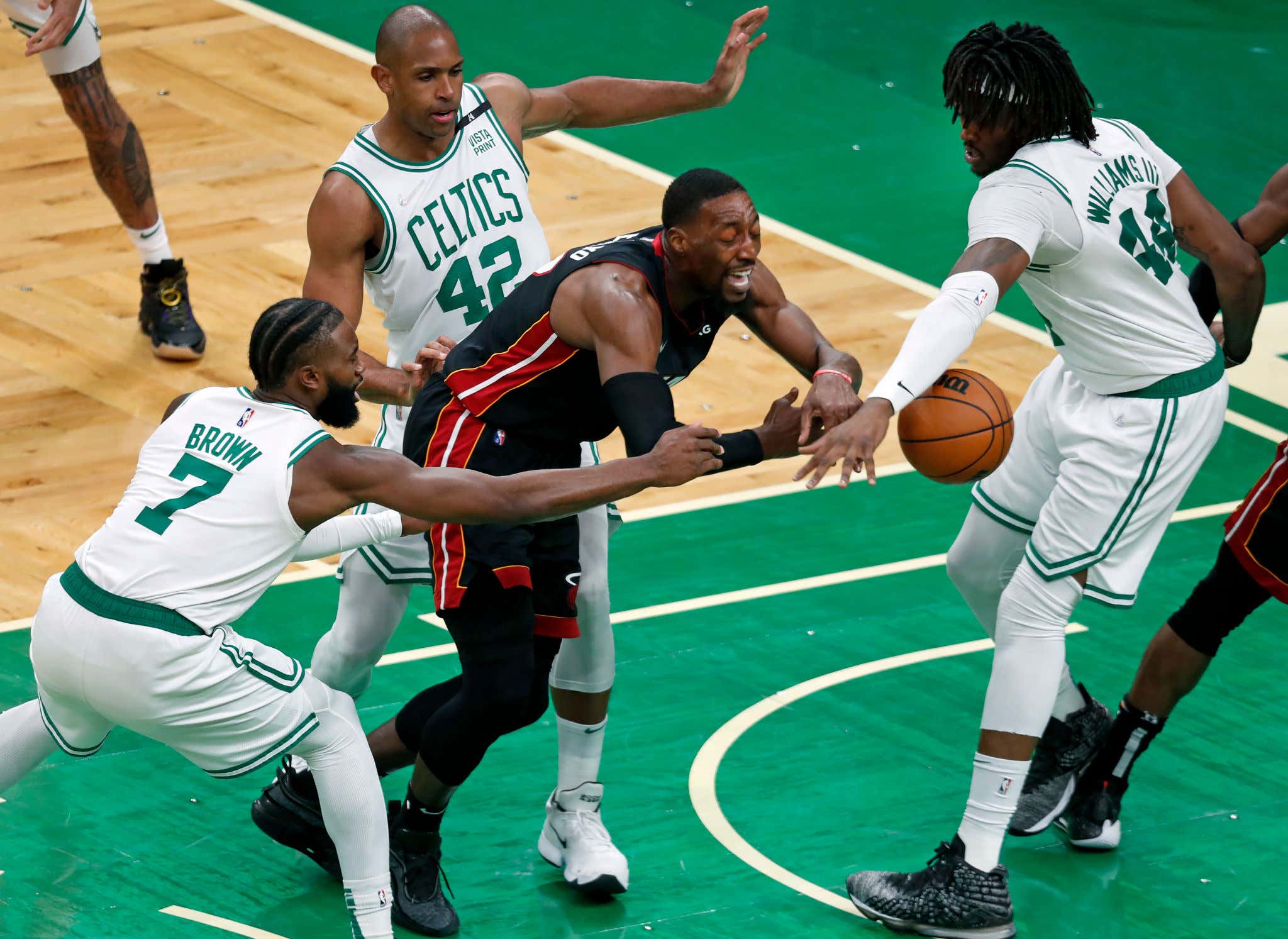 Good luck trying to predict the 2022 NBA playoffs. Every game it seems like the pendulum swings overcompensatingly back int he direction of the other team and there have been blowouts galore. Either the final score is lopsided, or it becomes closer at the end than the final score indicates because of garbage time.

That's how, say, Bam Adebayo goes from putting up a 31-10-6 in Game 3 to basically disappearing in the Miami Heat's lopsided 102-82 loss at Boston in Game 4. Adebayo isn't the only Heat starter to blame, though. He was merely a part of a historic, revolting start by the visitors.

The Heat's latest showing was so pathetic, they're actually an underdog in Miami for only the sixth time all season. Boston enters Wednesday as 2.5-point favorites as of this writing. Time to dive a little deeper and break down this huge Game 5 matchup.

I'd say the general health of Jimmy Butler (OU 24.5 points) will go a long way in deciding tonight's contest. Although the Heat managed to win without him in the second half of Game 3 on the road, Butler was hobbled and largely ineffective in Games 3 and 4. After going for 41 points to begin the Eastern Conference Finals and following that with 32 points, Jimmy Buckets has scored only 14 points in his last two starts.

Knee soreness has been the culprit for Butler's drastic drop in form. This guy is the heart and soul of so-called Heat Culture. Just like he did in the Orlando bubble in 2020, he's found a new gear this postseason as an all-around offensive force. Unfortunately, he has a bad wheel. With such a short turnaround between games, there isn't much time for Butler to recover.

As banged up as the Celtics are with Robert Williams and Marcus Smart listed as questionable entering Game 5, no single injury has more of an impact on this series than Butler's. Therefore, bookmakers are counting out Miami (+118), despite its 10-1 SU record in its past 11 at home.

All-NBA first-teamer Jayson Tatum's shoulder is apparently fine, considering he put up 31 points in Monday's huge victory. What's crazy is Jaylen Brown, who I predicted would hit his Over scoring prop, was an atrocious 5-for-20 form the field and scored only 12 points. That the Celtics still managed to win by 20 tells you they have at least comparable depth to the Heat, yet I'd still give Miami the advantage in that department. No question whose best players have more juice, though.

The thing is, I'd trust Tatum right now more than Butler, and even Brown over whomever is Miami's No. 2 scoring option. I know Al Horford (OU 8.5 rebounds) isn't what he used to be. Still, he's a five-time All-Star who, along with Robert Williams, have all but rendered Adebayo worthless for damn near the entire series. Horford has 27 boards and seven blocks in his past two outings. That's at least stardom on the defensive end.

I'm also not taking anything away from Williams. This stat right here is downright nuts:

Home team needs 'Dipo in lieu of a Herro

A nagging groin injury has limited Tyler Herro of late. The young stud and reigning Sixth Man of the Year who was so pivotal in Miami's 2020 bubble run to the NBA Finals missed Game 4, and his status is up in the air for tonight. The following intel does not bode well whatsoever:

Herro is the type of spark plug off the bench the Heat desperately need. That's where Victor Oladipo needs to come in and continue to shine. Heat coach Erik Spoelstra is a brilliant tactician and a master at juggling lineups and reshuffling his rotation. As Kyle Lowry keeps being hampered by a bad hammy, Butler is hobbled by his knee and Herro is likely unable to participate, I don't see why Spo wouldn't add Oladipo to the starting five after his team-high 23 points in Game 4.

Like what the fuck is that about? What does Oladipo have to do to be granted a starting spot over the likes of Max Strus and Gabe Vincent, former undrafted free agents who've gotten the nod in Miami's backcourt when Lowry has been sidelined?

Keep an eye out for Oladipo's props prior to tip-off. They aren't listed now given the Heat's lengthy injury report with Strus, Vincent, Lowry, Herro and P.J. Tucker all questionable. In any event, it may be well worth hammering the Over on any one of Oladipo's props. The hope is Oladipo can help cut into Miami's rebounding deficit, too, by crashing the glass or just by providing more efficient scoring. Boston is averaging 45.8 boards per contest in this series to the Heat's 38.5. You can attribute some of that to the Celtics' superior effective FG% (54.5% to 49.6%).

Celtics are as tough as teams come on the road

I mentioned earlier how Game 5 will be only the sixth time this iteration of the Heat are home dogs. They've gone 4-1 ATS/SU in those situations, with an average points margin of +10.4. Thing is, the Celtics are one of the better road teams the NBA has seen in recent memory. They have a +7.4 point differential away from TD Garden and are an NBA-best 31-16-1 ATS.

I feel like a broken record in these previews citing just how well Boston has fared under these circumstances. It's still worth reiterating, because the C's have a shot to make tonight the third straight series they've pulled off two road wins. Recall what happened the last time these teams met at FTX Arena for Game 2. Celtics 127, Heat 102.

The Over had been 10-3 entering the Game 4 before Miami's cold shooting start all but guaranteed the Under would hit. You'd think the inclination would be to go back toward that side of the total points line. However, with Adebayo's monster Game 3 looking like a complete aberration and the uncertainty about Butler's health, I can't help but go Under here — and take Boston to cover the small spread. Tonight is so important (DUH). Both teams love to grind and play hard-nosed defense. Possessions should be down. That 204 total is pretty damn low. Not sure it can be low enough to be honest.

I'm expecting the Heat to start better than they did on Monday, mainly because, how can they possibly be worse? Then, the Celtics win the second quarter, which they've done in each of their last 10 games. That's a worthy wager at -110.

With Robert Williams' playing status uncertain, I like Horford to pull down at least nine boards tonight. Player props have been pretty tough for me lately. This one feels a little more certain than recent ones due to the inherent unpredictability of these playoffs I mentioned in the intro.