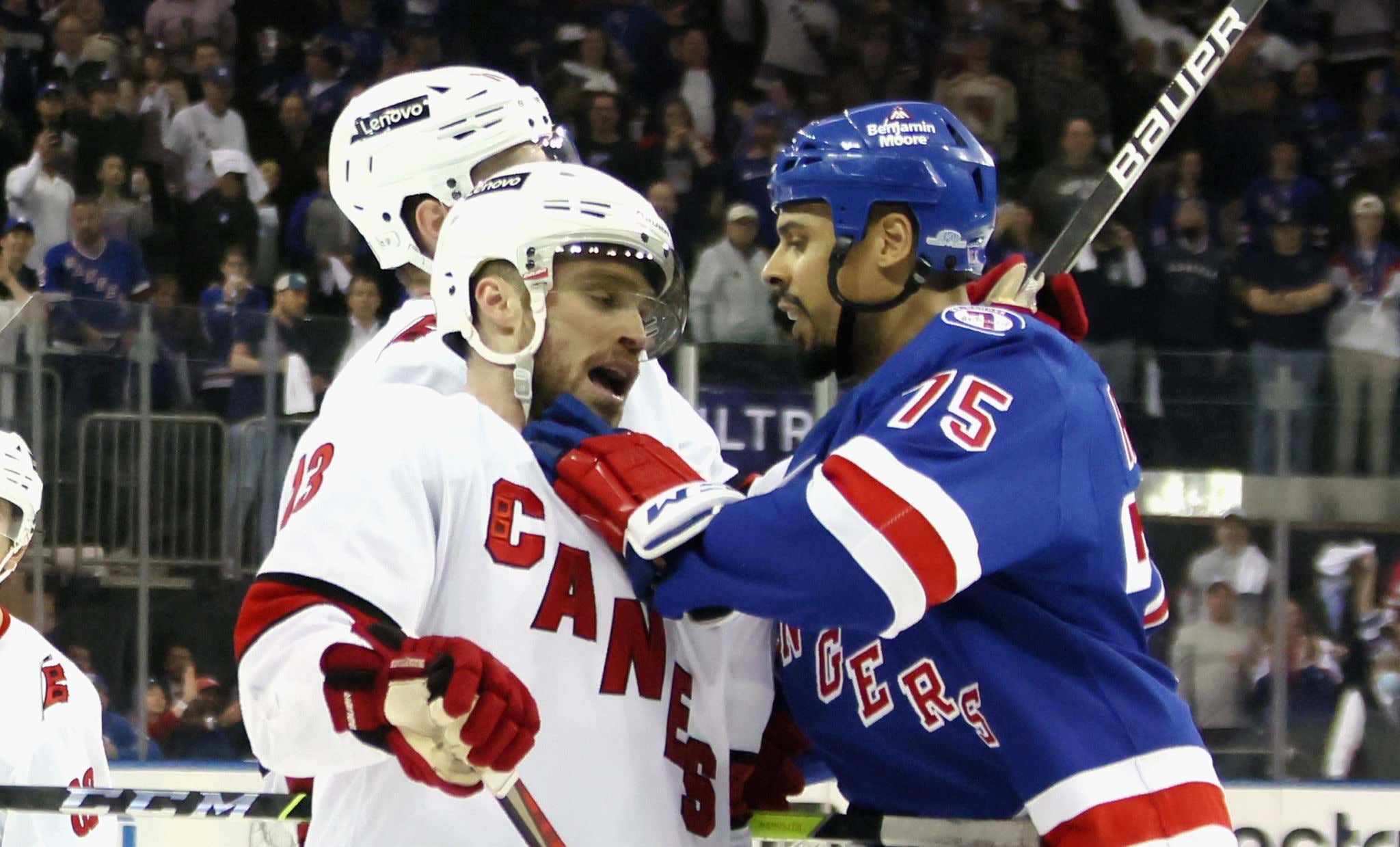 In 2003, the Minnesota Wild erased consecutive 3-1 deficits to become the first team to win back-to-back series after trailing by two games. With a win tonight in Raleigh, the baby Blueshirts will have a pair of opportunities to become the second. Before you go updating the history books let's make things clear - it won't be easy. The Canes have been an absolute juggernaut at home with a 6-0 record by a total score of 22-7. That's flat out dominant. Meanwhile the Rangers have only mustered 1 road victory in 5 tries.

Still, NY comes into tonight's tilt with all the momentum in the world after two home wins they essentially led the entire way. And realistically speaking they played well enough in Carolina to have stolen at least the series opener so there's no reason to think they'll all of a sudden be out-matched. It's house money for them. For the Hurricanes, all the pressure is on. They're the ones with expectations. They did this dance with Boston exchanging home wins throughout but the Bruins were never really close in any road contests. The Rangers were right there in both. If the Canes slip up they'll be headed back to MSG fighting for their playoff lives after dropping three straight.

Having home ice is all about matchups and that's key to Carolina's success. The Staal/Fast/Niedereiter trio did a number on Boston's top guns & the same to the Blueshirts, so if NY plans on stealing tonight's tilt one of two things is gonna have to happen. Either Zibanejad's line is gonna have to win that matchup or Panarin is gonna have to pick up the slack. I have little doubt he's nursing an injury (right hand/wrist/arm?) but it's the playoffs. He's too good not to contribute when it matters most regardless of perfect health. Hell, Ryan Lindgren looks to be fighting through an inevitable leg amputation just fine. The Breadman picked a great time to show up in a Game 7 OT last round. Stamping his name on the scoresheet tonight would be huge as 6 of his 8 postseason points have come in NYR wins.

The Canes are a confident team and they should be in their own barn - but if there's ever a time for a little doubt to creep in, it's right now. Shesterkin is absolutely locked in while Raanta's lost a bit of his luster. They've ceded the first goal in 3 of 4 and allowed the vaunted Rangers powerplay to find their groove with a tally in two straight. They seem to be the less composed group compared to a Blueshirts squad who's picked up their physical play without costing themselves. Opportunity is banging loud for NY and in a perfect world it'd be ideal for them to avoid a Game 7 in front of the Caniacs. This one may very well mean the series for either side & I'd much rather be the one that's won the last two.

All the Blueshirts have done so far these playoffs is everything they "can't". They can't possibly come back in every game while down 3-1 in the series vs Pittsburgh. They can't possibly make this round competitive after wasting a golden opportunity to avoid being down 2-0.

Now they can't possibly beat the Hurricanes under their own roof…