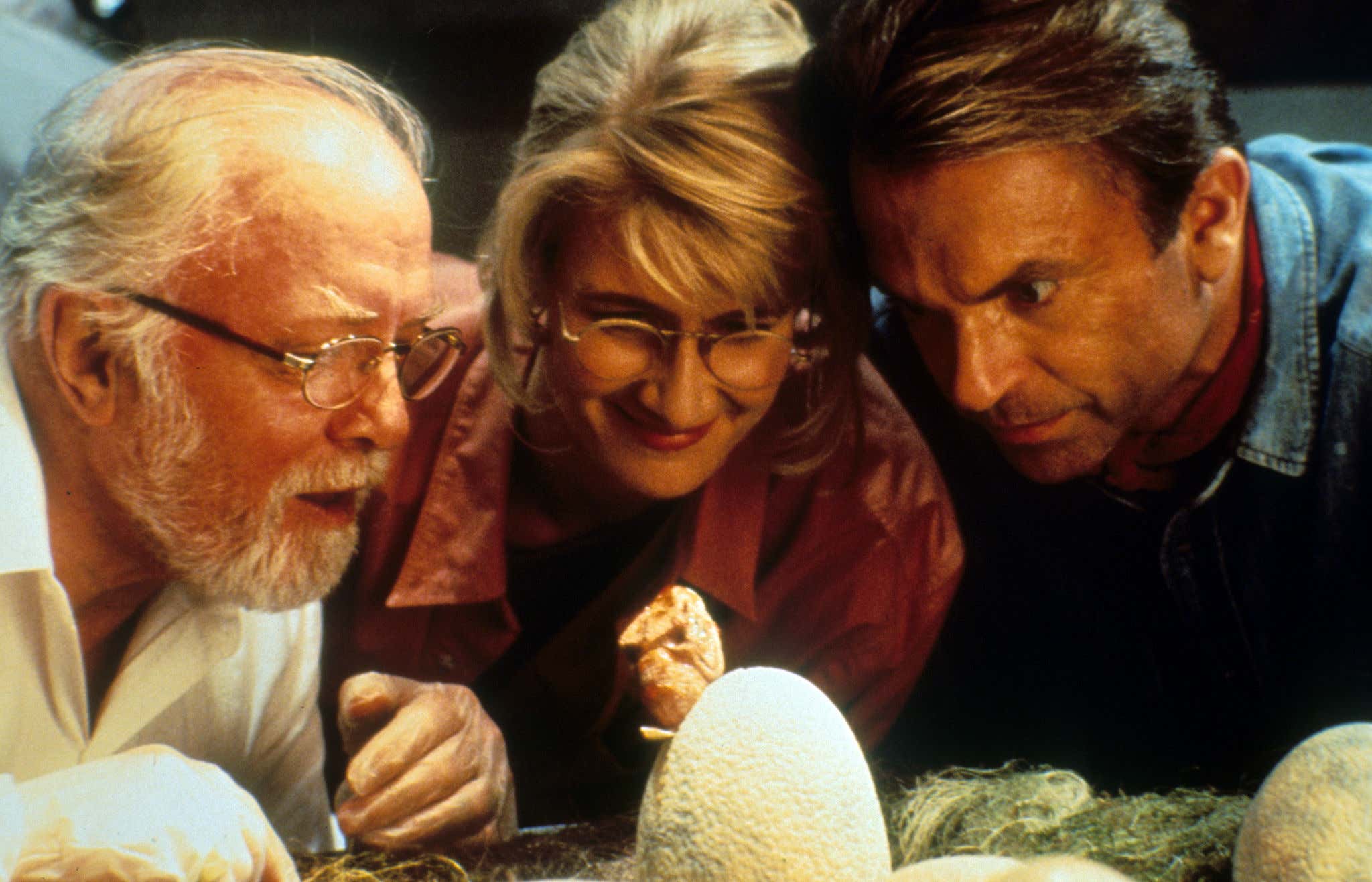 Most of you reading this have no doubt grown up with Jurassic Park, since it hit theaters before you were born. So you can be forgiven if you don't fully grasp its impact on pop culture.

A newlywed Young(er) Balls and his blushing Irish Rose bride had each read the best selling Michael Crichton book, and saw the film the night it came out. And I distinctly remember telling my co-workers the next morning that I wouldn't spoil anything, other than to tell them Steven Spielberg actually bred real, live dinosaurs and taught them how to act. There was no other explanation for how he pulled it off. The leap forward in CGI and practical effects was just that great. Nothing like it had ever been seen before. It lay the groundwork for so many other landmark works to follow, from The Matrix to the Lord of the Rings trilogy and Game of Thrones.

Moreover, it was a masterclass in storytelling. Even in the early 90s Spielberg was already the established GOAT of directing and crafting the perfect summer blockbuster. It hit all the right notes. Gave the public yet another unforgettable soundtrack by John Williams. Combined the best elements of Sci-Fi, action and horror. As he did with Jaws, Spielberg created a satisfying crescendo ending that was a vast improvement on the anti-climax in the book. And turned it all into the closest thing you could get to a theme park ride while sitting in a dark theater.

And at the center of it all were main and secondary characters you actually cared about. From the eccentric park owner to the employees to the kids. All led by the three scientist protagonists, who were perfectly cast.

Which is why, even 30 years later, there's no one who doesn't love this movie or has any regrets about it. Except, it seems, one of those three main characters. Because everything you've ever liked has to suck now. Them's the rules.

Source - Laura Dern and Sam Niell headlined Steven Spielberg’s 1993 blockbuster “Jurassic Park” as paleobotanist Ellie Sattler and paleontologist Alan Grant, respectively. The two characters fall in love during the film despite the 20-year age gap that existed between Dern and Niell during the making of the film. Dern was 23 years old when filming started and 26 when the movie opened in 1993. Niell, on the other hand, was 43 years old during the shoot. Neither actor was too concerned with their age gap and their characters’ romance.

“I am 20 years older than Laura!” Neill recently told The Sunday Times. “Which at the time was a completely appropriate age difference for a leading man and lady. [The age gap being inappropriate] never occurred to me until I opened a magazine and there was an article called ‘Old Geezers and Gals.’ People like Harrison Ford and Sean Connery acting with much younger people. And there I was, on the list. I thought, ‘Come on. It can’t be true.’”

“Well, it felt completely appropriate to fall in love with Sam Neill,” Dern added about the age gap. “And it was only now, when we returned in a moment of cultural awareness about the patriarchy, that I was, like, ‘Wow! We’re not the same age?’”

I guess you can count me and virtually every other Jurassic Park fan around the globe for not realizing the age gap between Laura Dern and Sam Neill. It never occurred to anyone to check into Dr. Sattler and Dr. Grant's DOB as we watched them get chased around the rainforest by velociraptors. We were able to suspend disbelief long enough to accept that creatures who've been extinct for 65 million years could be cloned in a lab and brought back to life. So therefore the idea that these two attractive co-workers could have romantic interest in each other didn't seem like much of a stretch. And of course, no one for a hot second doubted Jeff Goldblum's Ian Malcolm when he lectured Ellie about "strange attractions."

But that's the difference between those days and these, I suppose. Back then we were just into great stories that made a fictional point about he fatal hubris of mankind in the face of the awesome power of Nature. So we didn't spend enough time worrying about toxic masculinity's effect on the uneven power dynamic in the world of Paleontology. And for sure we didn't worry about whether a brilliant Paleo-botanist was being taken advantage of. We just wanted to see the corporate lawyer and the corrupt fat guy in the Aloha shirt get eaten. And watch a couple who loved each other survive.

But these are the times we're living in, I guess. Everything fun has to come into question. You can have a relationship with anyone you want, however they or you identify yourselves. But if you're an older guy dating a younger woman - even if you're a fictional character - you're flunking Cultural Awareness of the Patriarchy 101. And you'll have to answer for it.

So all you males who got beautiful younger women to fall in love with you of their own free will - your Leonardo DiCaprios, Harrison Fords, George Clooneys, Michael Douglases, and so on - it's starting to sound like you're the real dinosaurs.