(I’m going to try to avoid all major spoilers for this. The small ones I will mention I’ll save for the end and notate before I get to them)

(I know the tagline “Must Watch” is like the scarlet letter on this site. It means the haters can’t wait to come for you and tell you you’re wrong. I still stand by it here)

Yesterday, I spent my last night in Boston and lucked out scoring a pair of sneak preview tickets to see Top Gun: Maverick with my buddy Vinny in a new AMC theater in Dorchester.

(1- I haven’t been back to downtown Boston besides Logan since beginning of Covid. It is INSANE how nice the city is now. Southie and Seaport are world class. The city (aside from the methodone mile in Dorchester) is so clean and beautiful now. New beautiful architecture everywhere. Businesses thriving. I know a lot of great ones were lost during the pandemic (shout out Lir & McGreevy’s) but things seem like they’ve bounced back and the city is in a great place now. (Much better than Chicago at least).

2- Dorchester is pretty fucking nice now. When did that happen? The theater we went to was in a huge retail development that was brand new and felt more like Newton or Wellesley than anything.)

We got to the theater and I was instantly blown away at how they’re pulling out all the stops for this movie.

They were handing out these pretty sick lithographs that surprisingly didn’t have some brand’s logo splashed all over it. 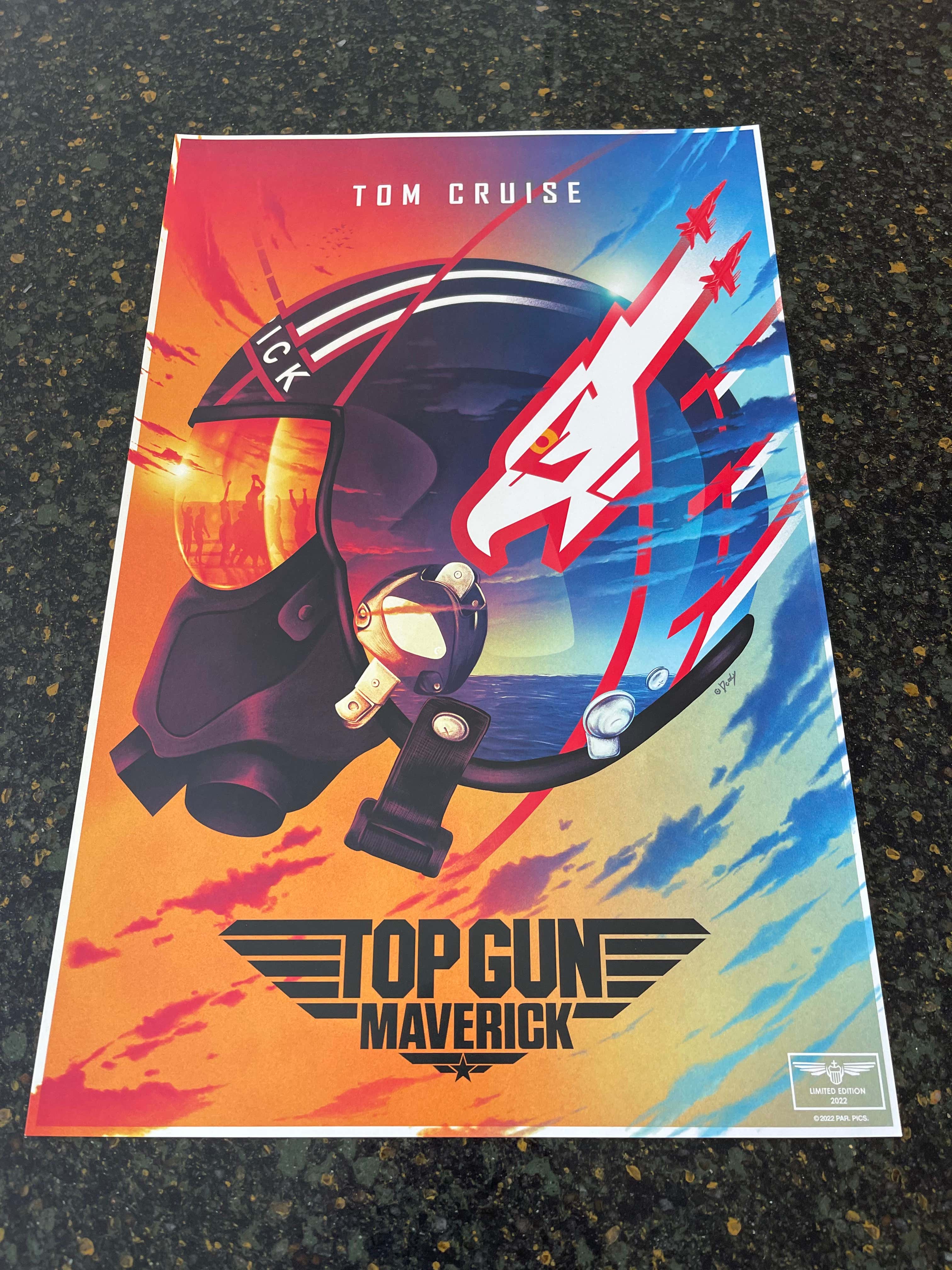 They had these metal popcorn bins with the Top Gun logo all over them that I didn’t know about until they sold out of them all.

They played this special premier reel before the movie of Tom Cruise and the cast attending all the different premiers of the movie shown around the globe with interviews from its stars.

And right before it started Tom Cruise appeared on screen to thank everybody who contributed to the making of the movie, all the people in the armed forces, all the people behind the scenes, and then to all of us in the audience for coming back to see movies in theaters and supporting the industry and all the workers at theaters around the country. It was really classy and seemed really sincere. Pretty cool.

The movie started off with the block text explaining the Fighter Weapons School, which was a nice throwback to the original but not as nice as one of the greatest instrumental theme songs of ALL TIME playing in the background as the opening shots aboard the aircraft carrier took place.

Harold Faltemeyer for the win always!

I cannot stress enough how much better it was seeing this movie in a theater than watching it on your couch.

This movie finally reminded me why going to the movies is such an awesome experience.

We were in one of those new Dolby theaters so the sound was over the top (something I’ll never complain about) but hearing the roar of the engines, and rattling in the cockpits was out of this world.

The film work they did in this was also off the charts and mesmerizing.

They somehow managed to capture the pilots in their cockpits pulling 8 Gs plus without making the shots feel all over the place, unsteady, or giving you a car sickness feeling.

For the sound and visuals alone this movie was incredible to experience in a theater on the big screen. This was the first time I can remember having “fun” at a movie in a long time.

It was like watching a Star Wars movie but with real aircraft and on Earth. Seeing an action film today with no CGI was fucking awesome.

36 years have passed since Pete “Maverick” Mitchell lost his wingman Goose, and he still hasn’t forgiven himself. And neither has Bradley “Rooster” Bradshaw (played by Miles Teller), who is the son of his late friend Nick “Goose” Bradshaw.

I thought I was going to hate Teller in this movie. I don’t know why but when I heard he was cast in this role it seemed forced and made me roll my eyes like an asshole. But I have to admit, aside from a kind of bold introduction to his character, Teller pretty much nailed it in this.

(Small spoiler- even his rendition of his dad’s famous rendition on the piano, which at first seemed real cringeworthy, worked really well and was actually a pretty touching callback moment).

Ed Harris plays an amazing asshole. As usual. (Is there anybody better?)

And Jennifer Connolly was perhaps the greatest female romance upgrade of ANY movie all time ever.

The good news is the movie run time is perfect. It never drags. And they don’t speed anything up (too bad) to make it feel rushed.

The soundtrack is fucking amazing. (Obviously). Including an incredible track that plays during the climax that Lady Gaga recorded specially for the movie-

and a new one from OneRepublic as well-

The storyline is really good, not great (I’ll get to in the spoilers section) but again, it was a well done, and more importantly FUN movie.

With every single thing made today, ESPECIALLY remakes and sequels being woke, Top Gun Maverick somehow managed to avoid it.

I said it to my friend walking out and I’ll say it again here, I don’t care how fucking off the reservation Tom Cruise is. I love him. The man is just a mega movie star who makes amazing movies. He can be as crazy as he wants to be. He’s a national treasure.

Do not read if you don’t want the slightest thing spoiled for you.

Ok, now for a few things I had a problem with in the movie that didn’t take away from it at all, but were just annoying.

2- how on Earth do you never reference or mention where the enemy target and mission is? I can assume this was edited out of the movie once the Russian/Ukrainian conflict began, or Hollywood was afraid of triggering North Korea. But to just gloss over where this mission was being tan felt really strange and bizarre. From the landscape you could tell it was with Russia or North Korea but still.

3- The scene where Cruise is first training his squadron and putting on an absolute clinic while “Won’t Get Fooled Again” by The Who plays is one of the best sequences and soundtrackings I can ever remember watching. So so so well done.

4- The plane Cruise flies in the beginning of the film? The one he pulls 10 G’s in?

I guess it’s called a “Darkstar SR-72” and holy shit is it magnificent. Cruise goes hypersonic in it. It looks more like an alien spaceship than a jet. And leads you to believe we can’t even fathom what kind of toys and weapons our military has in its pocket.

5- the acting in this is really great. And for good reason. Cruise was on the record saying he’d only make the film if they actually filmed the scenes in real life. Meaning no CGI. He also required all the actors to film their own stunts, meaning they had to pull real G-forces.

“…Another was that all the actors playing pilots be trained to ride in F-16s and withstand higher G-forces. On the original, only Cruise managed it.

“Tom devised a way to train the actors. In the first one, when they put them up in the air with one camera in the cockpit, everybody threw up. We had no usable footage. Their eyes were rolling back in their heads,” says Bruckheimer. “Tom said, ‘Listen, we have to figure out a way to put our actors up there so they can handle the G-forces.’”

It took 15 months, Bruckheimer says, to work out with the Navy, lawyers and the film crew how to have six cameras in the cockpit. Actors playing pilots — Glen Powell, Monica Barbaro, Greg Tarzan Davis, Danny Ramirez, Lewis Pullman and Jay Ellis — were trained over three months to prepare for the velocity of F-18 flights.

“Some actors said, ‘I won’t do it. I’m afraid of flying.’ So we lost some talented people who just couldn’t commit to making the movie in the way we did it,” Bruckheimer says. “The majority of the pilots that we worked with on this current movie said they joined the military because they joined the first ‘Top Gun.’”

7- it was really great seeing Val Kilmer in this. And really sad. He looks much better but the fact he can’t speak, in real life, is pretty sad. All in all they did a gray job working his character into this movie and storyline.

See I told you I wouldn’t ruin the movie.

Again, go see it this weekend, in a theater, and get the full experience.

P.s.- they did a really great job of showcasing just how bad ass our country’s navy and Air Force are in this. Thank you to all our armed service men and women and veterans. We are so lucky.