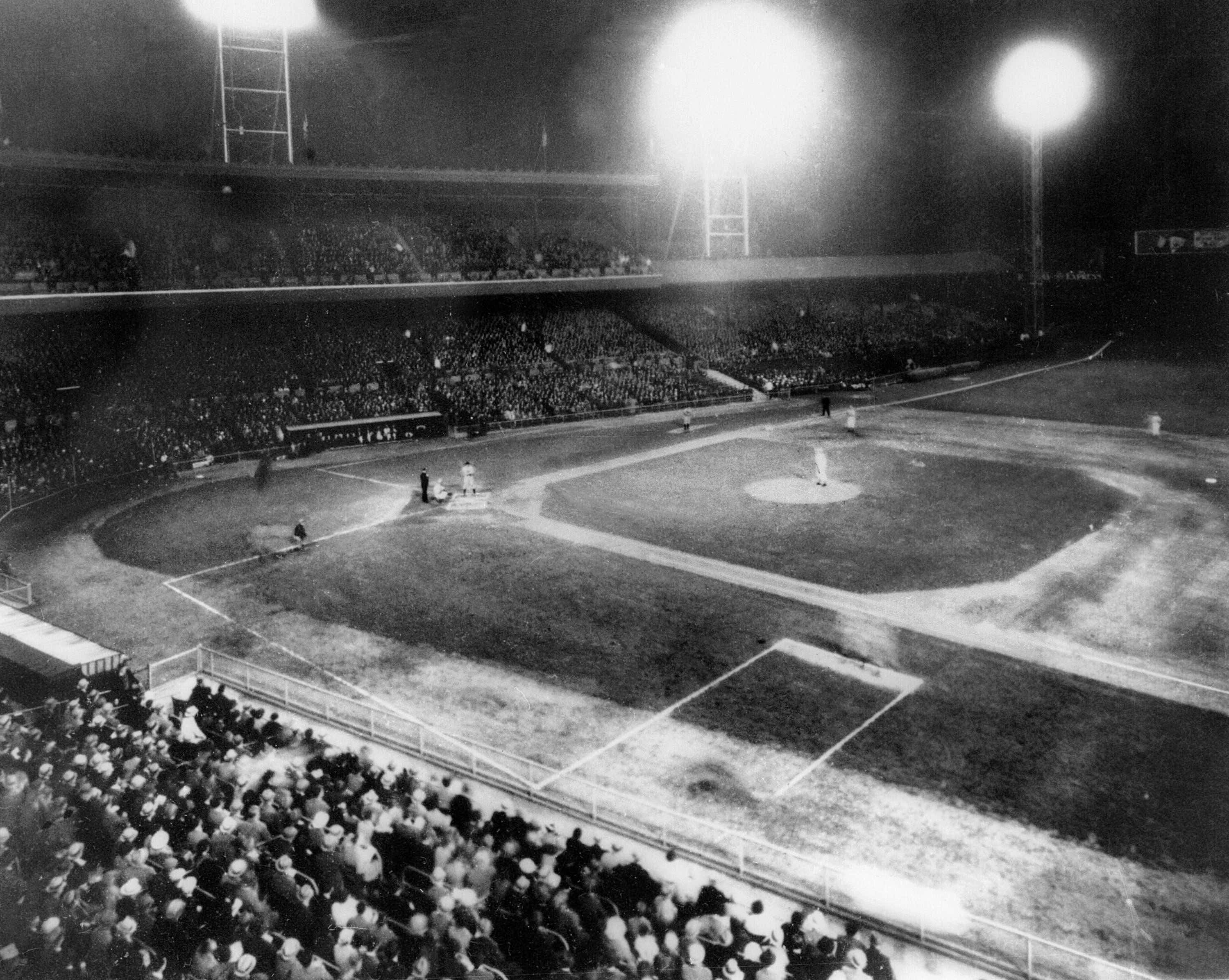 The era of night baseball begins as 20,422 fans sit under the lights as the Cincinnati Reds host the Philadelphia Phillies at Crosley Field. A ceremony is held with President Franklin D. Roosevelt pushing a button to turn on the lights from the white house. The Reds would win the game 2-1 as Paul Derringer earned the win in the first official Major League Night Game.

Experiments with night baseball began as soon as the light bulb was invented by Thomas Edison, as a game was played in 1880 between two rival department stores. On the professional level, teams began testing baseball under temporary floodlights at the start of the 20th Century with occasional exhibition games involving minor league teams. In 1930, teams in Independence, Missouri, and Des Moines, Iowa, became the first to install permanent lighting.

Over the next five years, more teams began installing lights in the minor leagues as it helped boost attendance during the depression. Seeing this, Larry MacPhail, team President of the Cincinnati Reds, convinced ownership to install lights at Crosley Field. The lighting at Crosley field was made up of eight stanchions holding 632 lamps. While there may have been some initial resistance to night baseball, it became an immediate curiosity when the first game was held. National League President Ford C. Frick was in attendance, while President Franklin D. Roosevelt threw a ceremonial switch in the White House to turn on the lights.

Paul Derringer got the start for the Reds, managed by Chuck Dressen, while Jimmie Wilson had Joe Bowman make the start for the Phillies. Derringer retired the Phillies in order to start the game, while Billy Myers led off with a double for Cincinnati. Meyers later came into score on Ival Goodman’s grounder to first. Paul Derringer pitched around a Johnny Vergez single in the second and two hits in the fourth before getting an insurance run when Billy Sullivan scored on a grounder to second by Gilly Campbell. The Phillies also got their first run on a groundout as Al Todd was plated in the fifth when Joe Bowman grounded to short. It would be all the scoring in the game as the pitchers were in control. The Reds improved to 12-16 with the win as Derringer, allowing one run on six hits with three strikeouts, improved to 5-2 on the season. Bowman, meanwhile, dropped to 0-3 despite allowing just four hits as the Phillies slipped to 8-18.

The Reds would host one night game against each of the seven other National League teams in 1935, posting a record of 3-4. The night games drew significant increases in attendance leading more teams to add lights as night baseball went from a curiosity to the norm over the next three decades.

Larry MacPhail moved on to become president of the Brooklyn Dodgers and had them install lights in 1938 at Ebbets Field. In the first night game in Brooklyn, Johnny Vander Meer of the Reds became the first pitcher to hurl back-to-back No-Hitters as the Reds beat Brooklyn 6-0. Four teams added lights a year later, with Shibe Park home to the Philadelphia Phillies and Philadelphia Athletics holding their first night games, as did the Chicago White Sox at Comiskey Park and the Cleveland Indians at Municipal Stadium. In 1940 lights were added in St. Louis at Sportsmen’s Park, home to the Cardinals and Browns. They were also added to Forbes Field in Pittsburgh for the Pirates and the Polo Grounds, home of the New York Giants. The Senators played the first night game at Washington’s Griffith Stadium in 1941.

After that, World War II delayed the growth of night baseball, as planned lighting for Wrigley Field was scrapped for the war effort. After the war, lights were added to Braves Field and Yankee Stadium in 1946. A year later, the Boston Red Sox added lights to Fenway Park, while the Detroit Tigers waited until 1948 to install lights at Briggs Stadium. Meanwhile, the Chicago Cubs would not play their first night game at Wrigley Field until 1988.