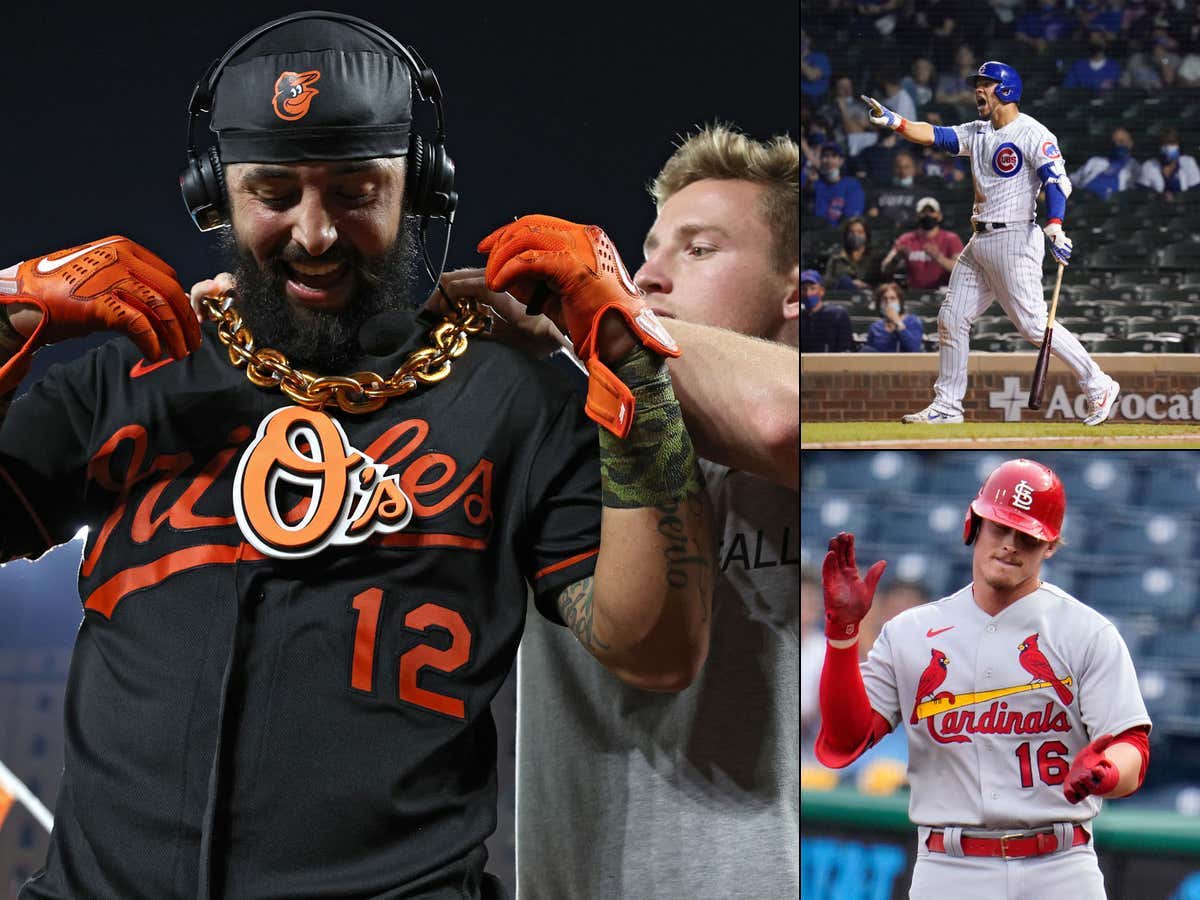 It's a big weekend of baseball with Memorial Day lurking in the near future. That's generally the first major checkpoint to me in the MLB season and it's actually pretty surprising how quickly it came.

We'll do more detailed standings checks on Mondays and Fridays. Just an update for those of you checking in now: 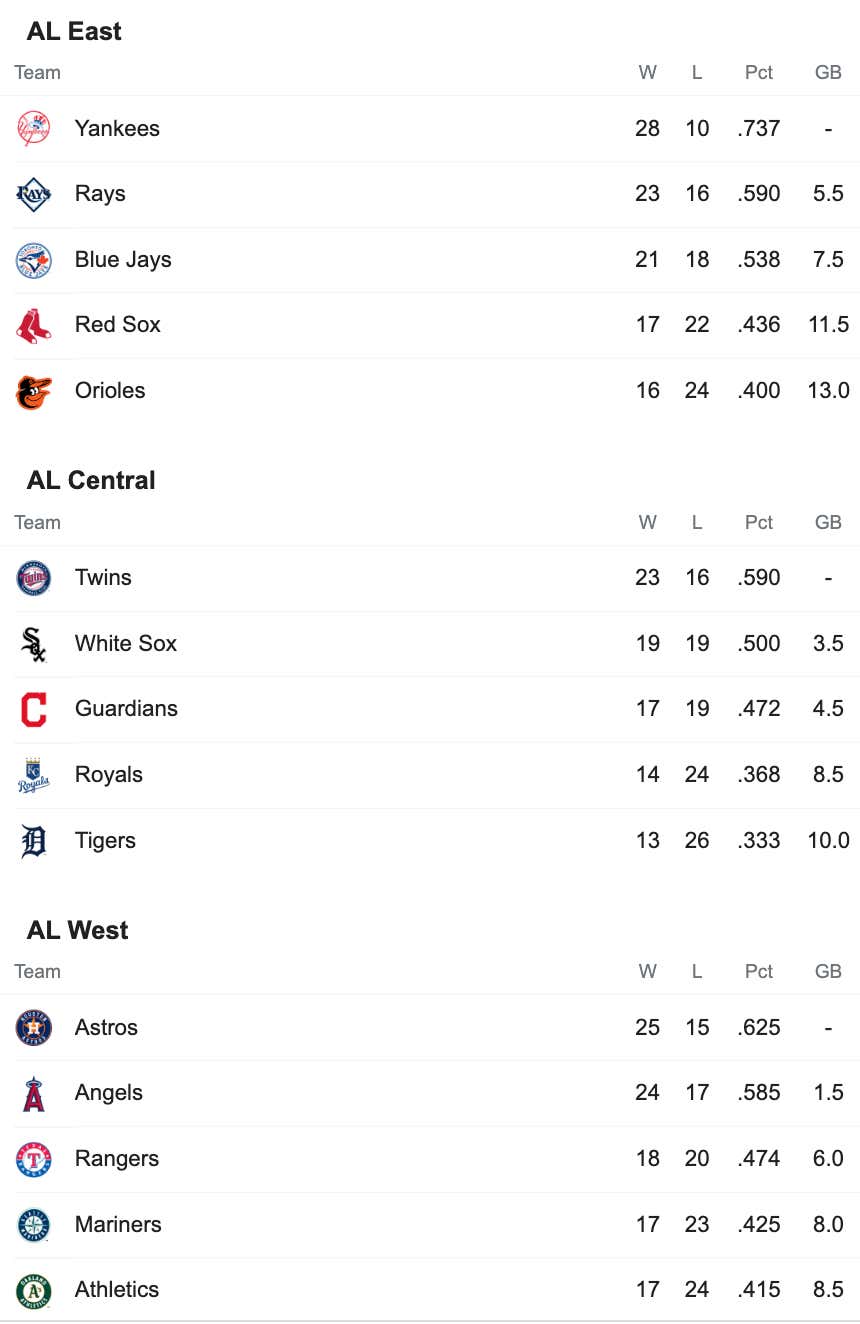 The standings are wide.

The average GB is 3.92 games. At this exact time last year the average division lead was 1.67. Here's the average lead through roughly the first 25% of the season last couple years:

I think there's more teams willing to be complete dogshit/below average. I also think it's kind of a weak sample size. But same time the last 5 seasons have been bonkers whereas 2013-17 was relatively smooth. You can absolutely use this as a reference point to early season competitive balance.

But I am a Certified Public Accountant licensed to practice in the state of Illinois meaning that I'm heavily trained, certified and experienced in rendering qualified opinions. And in that process, I consciously retired all forms of Bias in favor of employing deep Professional Skepticism. This is my way of saying I have no agenda. I'm a mere bean counter by trade, professionally obligated to tell the data's story. That's who I am at my core guys. I'm a balanced man who happens to love baseball so let's just get to it.

Sorry I just can't help myself. I know I said all that stuff about being fair and balanced but you just gotta trust me on this one. The Cardinals are like the Russian military resistance on the Eastern Front during Operation Barbarossa. They just keep coming in untold numbers. One red solider after the other. There's seemingly no end in sight when trying to grasp the size and strength of the Cardinals farm system.

Nolan Gorman made his MLB debut last night and of course smoked a liner base knock. This guy looks like he's going to be a massive problem for pitching staffs everywhere. Although worth noting that Nolan Gorman is a strikeout machine at near unprecedented numbers. Like how about you try on a 34% K rate at AAA for size? That's a little big, no? Maybe something slimmer and more fitting? 34% is basically like facing Dylan Cease, Shane McClanahan and Carlos Rodon Every. Single. Time.

In the same vein - .377 BABIP means you absolutely SHIT on the baseball. It also means you're probably a little lucky, sure. But bigger takeaway is Nolan Gorman is yet another quality asshole St. Louis Cardinals player that will ruin many of days and nights in my future. Welcome to the Big Leagues Nolan!

His best friend is pitching today. Read more about that story here:

I enjoy watching the Orioles play baseball. I've said that forever. It goes back to childhood. My older brother had an obsession with Cal Ripken Jr. to the point that my parents were forced to actively support him. We even took a vacation to Camden Yards for an August game the year Cal broke Lou Gherig's record. He was so crazy about Cal Ripken that it was one of those things where you have no choice but to embrace it. Or else it could've gone the complete other way. Next thing you know my brother's dropping out of junior high and selling crack. So we all rallied around it and watched a lot of Orioles games with him. And I'll always have a special spot in my heart for Baltimore based entirely on that part of my childhood.

In any event, I really think baseball is better off with a good Orioles team. They're far away but maybe not that far. The only thing the Orioles need is some decent fucking culture. Sounds simple but it's been lacking for nearly a decade. Get the boys some vibes and attitude and you could see them catapult in 2024. Laugh now, but I really mean like 90+ wins. The ownership is a bunch of soft wet pussies though so don't count on free agency. In fact let me just walk the whole thing back.

The Orioles have electric prospects and should be good, but they'll probably fuck it up.

Just Like How I Bombed On The Rangers This Week?

I put the Rangers 27th in my power rankings and turns out they just won't lose. Even if I hate the lineup and think Semien is a bum and that they're in purgatory this season. Even if I think they've got trash leadership and a brutal division. Nothing I say can bring me back from the shame Rangers fans are pouring on me. Whatever. Keep it coming. You guys have a lot of emotional shit to work through and I'm happy to be your punching bag. Speaking of which.

Treovr Story Is Beating The Shit Out Of The Baseball

Leading candidate for Dude Of The Week, Trevor Story is on an absolute terror. His .889 ISO is .250 points higher than any other weekly ISO in the 2022 season. For the uninitiated:

The formula - two ways to calculate

By focusing strictly on extra-base hits, ISO can help evaluate the raw power a player has.

Historical MLB average is .114 so there's some context on Trevor Story's week. Guy is on a rampage.

So Was Willson Contreras Yesterday

Quite frankly I would also be very fucking pissed if I had to sit through this behind the plate:

Hard to watch the staff give up 1,000 home runs and still keep your composure.

This is solely notable because Brett Phillips got called out this week by Jake for throwing 60 mph against the Angels. Said that Phillips has a cannon and should be reaching back for low/mid 90's in relief. Maybe even get some work as a legit reliever? Arm strength above suggests STRONG YES.

CJ Edwards Gets A Triple Play

We'll end here. I'm in a good mood. I've got a full day of baseball ahead. Might play some golf tomorrow. Going to see the new baby in the family and probably having a nice lunch in the western suburbs. For all intents in purposes, things are great. So good that even CJ Edwards is back getting big league outs with a plus plus cutter. People forget he has some of the filthiest stuff to ever come out of a Wrigley bullpen. Walks and approach ultimately forced him out of town but it's awesome to see him still carving out a path. Few of us would be surprised if he one day turned into a shut down closer. When the stuff is that good, anything is possible.

Speaking of which, do you think it's possible you could subscribe to Starting 9 on YouTube and your podcast app? Here's the link.

Episodes are out every Tuesday & Thursday morning. Goal is to give you guys a show that lets you stay on top of the league without being too overwhelmed. There's a lot of shit going on. We're doing detailed league stuff on Tuesdays and then interviews on Thursday. Kevin Gausman is joining us next week to talk about his splitty which is just a preposterous sentence to write on a Saturday morning. So go subscribe to our shit so you don't miss it and I can keep doing it. That's the proposal.

Thank you for your attention.