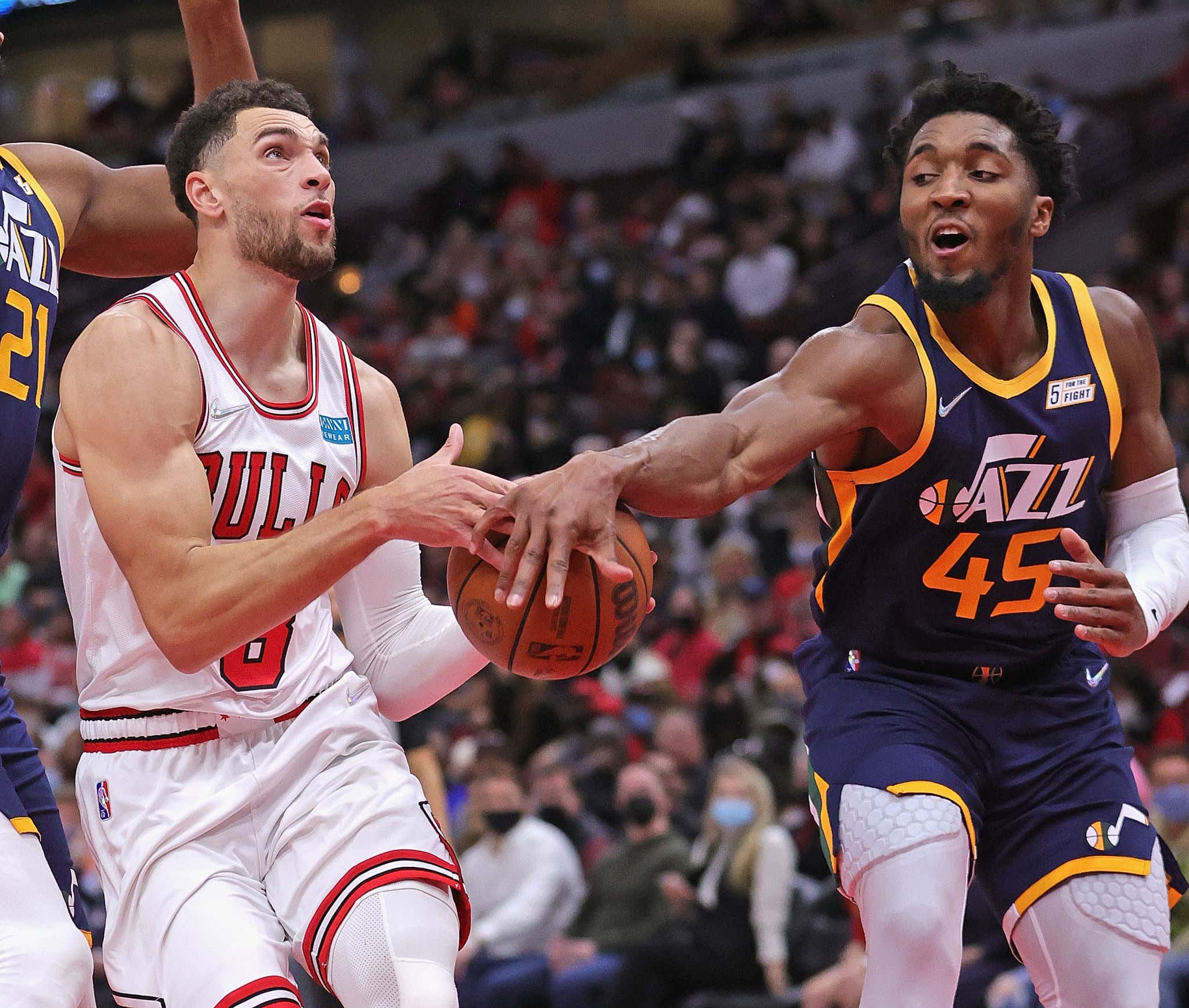 Unless you're a member of the Boston Celtics, Miami Heat, Golden State Warriors, or Dallas Mavericks, you are currently in the NBA offseason. Sadly, your team either stunk or underachieved in the playoffs. That's tough. The good news for the rest of us is we're now entering the part of the NBA season where rumors will be flying. You have agents starting to posture for their clients, you have "leaks" that add fuel to the fire for maybe some drama that existed during the season, it's a great time to be on the internet. Not so much if you're a fan of one of these teams, but if you're not it rules. I love NBA rumors mostly because even though 99% of the time it's bullshit, they help get us through the offseason.

Seeing as how we just had the lottery and are ramping up to the NBA Draft/free agency, things are only going to intensify. We aren't even half way through the Conference Finals and we're already getting leaks. I figured it's Friday, you don't want to work, so let's talk about some of what we're hearing

For my money, this is the biggest matzah ball we got today. Zach LaVine is coming off a great year and is set to hit the market as a UFA this summer. While it's possible that James Harden and Kyrie turn down their player options and hit the open market, I find that unlikely. Same thing with Beal, Westbrook, and Wall who also have player options. Of all the names who are true UFA this summer, LaVine is by far the best player.

He's also someone that is slated to have some knee surgery, which makes me wonder why we are getting this leak. Is he really going to consider leaving the Bulls where he has a great role and is on a team that looks to be headed in the right direction? Or, is there a chance that maybe the Bulls would be hesitant to give him a max deal considering his knee issues and this is his way of using his leverage to ensure they do? I just don't get why he would want to leave. Especially when you hear that the Lakers could be the team he goes to. I'm not sure how that would work money wise, but from a basketball standpoint why would LaVine do that? Looking around the league at who has legit cap space this summer, none of those teams are contenders or in a better position than the Bulls are at the moment.

That's why to me, this feels more like the agent is getting out there and reminding the Bulls that despite this upcoming surgery, it is not in their best interest to fuck around with a LaVine extension. Especially with Lonzo also dealing with knee issues. DeRozan isn't getting any younger and LaVine is only 27. Is there a chance he sees the writing on the wall, that Lonzo isn't gonna be the same and DeRozan is on the back 9 of his career and he wants to bail? Again, I can't see it but then again crazier things have happened.

The second the Magic won the lottery, it basically started the process of getting out of the Mo Bamba business. It's been a weird fit in Orlando for Bamba, and he did show some actual progress this season, but on some level you are just worried that was a guy having a big season in a contract year and that's it. The question will be, do the Magic even extend a qualifying offer to him this summer to make him a RFA, or do they just cut their losses? My guess is they do just so they have the ability to match any offer he gets, and you can always do a sign & trade in that scenario. But with a new big about to come to town and Wendell Carter Jr already getting his extension, it's not surprising that Bamba will have a new home next year.

Bamba is still so young and the potential is still there, it could easily be a case of a guy getting a new change in scenary and then flourishing. He can protect the rim and stretch the floor, it just hasn't work in Orlando. If you're a team like the Blazers, you could do worse as a reserve big for Nurkic (if they keep him, he's UFA).

I wouldn't exactly call this a "rumor", because of everything we'll see in this blog it feels like the most real.

The Knicks need point guard help, that's not new. They are tied to every point guard under the sun whether it's Brogdon or Jalen Brunson or Donovan Mitchell. I think they've learned that they can't rely on Alec Burks to be the point guard, we know the Kemba experiment failed, and Thibs hates young players. So what do you do? You trade for Malcolm Brogdon. He's signed for 3 more guaranteed years through his age 31 season at around $22M a year so making the money work in a trade might get dicey, but the Knicks have some big money on their books they can do without.

Brogdon's talent has never been the issue, it's all about his ability to stay healthy. When he does, he's a legit guard with good size who can score at all three levels. He could be the calming presence that the Knicks need at that position while IQ develops. The bad news is the Pacers love to talk about trading players but then never actually trade players. But since they just brought in Haliburton, maybe they'd finally be open to actually moving Brogdon.

This one feels realistic, even though Knicks fans go through this every offseason.

Blazers need all the talent help they can get. Brigdes also is a position of need, so this seems like a win/win. Bridges is a RFA, and MJ has a choice to make. He's going to ask for the max if not close to it. We know MJ resisted the urge to max Kemba, so will he do the same thing here? If the Blazers come out and offer Bridges a massive offer sheet, would it really surprise anyone if MJ passed on matching it? That seems crazy since Bridges had a breakout year where he was playing at very close to an All Star level. Considering he's in his low 20s, that feels like a guy you would want to keep around. Him and LaMelo obviously have great chemistry.

It all just comes down to whether or not MJ is willing to fork over the money at this position. The Hornets DESPERATELY need to address their big man position, specifically center. If they have the chance to do that or max Bridges, I wonder which way they go. I don't get the sense that the Hornets are going to do something that makes them a luxury tax team so they'll probably make a choice between Bridges or a center.

Ah yes. You thought we wouldn't have a Donovan Mitchell rumor in here? Wake up. The best part of that "rumor" is none of those teams make any sense for the Jazz. Why would Danny Ainge help Pat Riley? He fucking hates Pat Riley. Does it really matter where Mitchell wants to go? He has 2+1 left on his current max extension, so unless he plans on pulling a Ben Simmons, he doesn't exactly have a ton of leverage.

At the same time, we know Trader Danny is going to do something with that roster. Logic says you trade Gobert, but not if you think Mitchell could turn into Hayward 2.0 and become a legit flight risk. All he has to do is turn down his 2025-26 player option (age 29 season) and he hits the open market as an UFA. You could potentially get more for him now since he has 2 more guaranteed seasons before then, but think of what the Jazz need. They need perimeter defenders. What players on either three of those teams fits that need? We're seeing the Heat outside of Butler do not have elite perimeter defenders. The same is true for the Knicks and Hawks.

That's why this one feels like mostly bullshit. Your classic case of a big name being in rumors and nothing more. I call it the Dame Effect.

The Warriors tax bill is insane. At some point, you have to realize you can't be paying your 4th option 30M a year, especially when you need to now pay Jordan Poole as well with what will most likely be $100M. The easiest thing to do is to move Wiggins, who has done a fairly good job at rehabbing his image as a Warrior. His defense has vastly improved, and while he may never be a #1 guy, he doesn't stink. It's not his fault the Wolves maxed him. What, he was supposed to turn that down?

Remember, next season Wiggins becomes an expiring contract at $33M. That alone makes him an retractable trade piece, not even factoring in his talent. He's only 27 so he's right in the middle of his prime, and I see no issue in the Warriors being able to capitalize on the Warriors bump that so many players get.

Who could trade for him? I guess that depends on what the Warriors want. I can't imagine they are going to want to add future salary to their books at big money, but then again you can't unload the asset for nothing. Yet if you do nothing, Wiggins can simply walk in the summer of 2023. It's quite the pickle. Looking around the league at other big time expiring contracts in the summer of 2023, what about a little full circle action in trading him for Kevin Love…again? That money is pretty close. Looking at the landscape it's tough, but then again we have no idea what the Warriors are willing to do with their books/luxury tax bill after this season. That will obviously determine what path they go.

For our first wave of rumors, I give these like a 6.5 out of 10. There's some substance there, but the big names like LaVine and Mitchell I'm not buying just yet. Ask me again in 2 months when all this shit heats up, because you know it will.