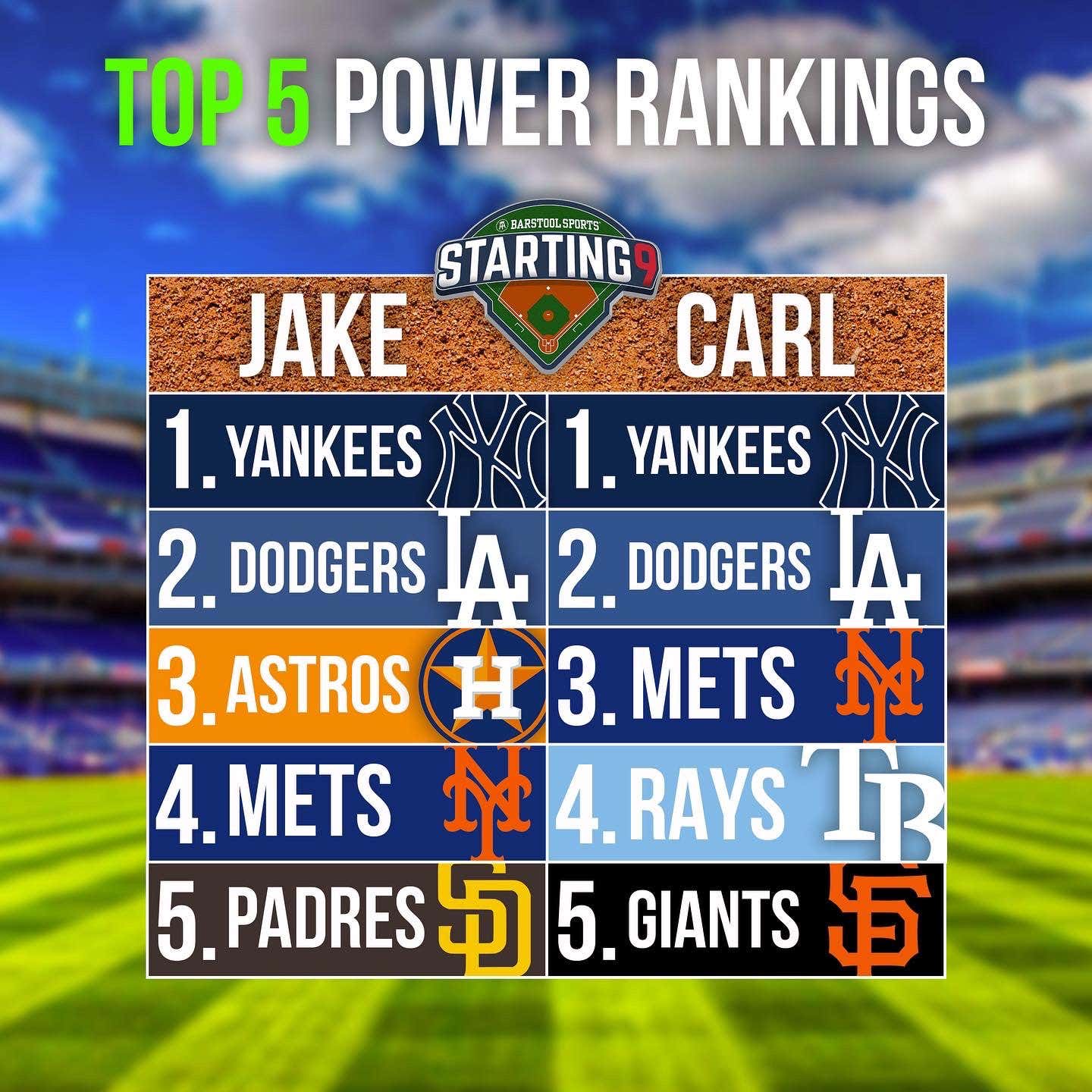 This one's easy to get going because it's the positive stuff. I explain on the show that it's more about a 7-game series right now to me in the moment. People bitched about me leaving off the Astros but at the time of recording they were 2-2 over their last 4. I don't know. The momentum was on the way out to me.

The Giants are swinging it so well right now. The pitching staff has struggled a bit but that's their ultimate strength. So if the lineup is heating up, they could destroy an entire week worth of games.

The Rays have won 4/5 of their last series and have surrendered just 14 runs in 7 games since getting fucking DUSTED 23-3 in a two game stretch against the Angels.

The Mets were 3rd before Scherzer went down. No chance they stay in the top 5 without him.

Then obviously the Padres have been super hot while some guys on the roster really struggle. That does not include Eric Hosmer who has been giving everyone a massive shit burger to eat this season en route to a 162 OPS+ and a 1.4 WAR in about 140 plate appearances. For context, he's posted a cumulative 2.7 WAR in 2,000 plate appearances for the Padres prior to this season. Napkin math says he's about 800% better than normal for the Padres. 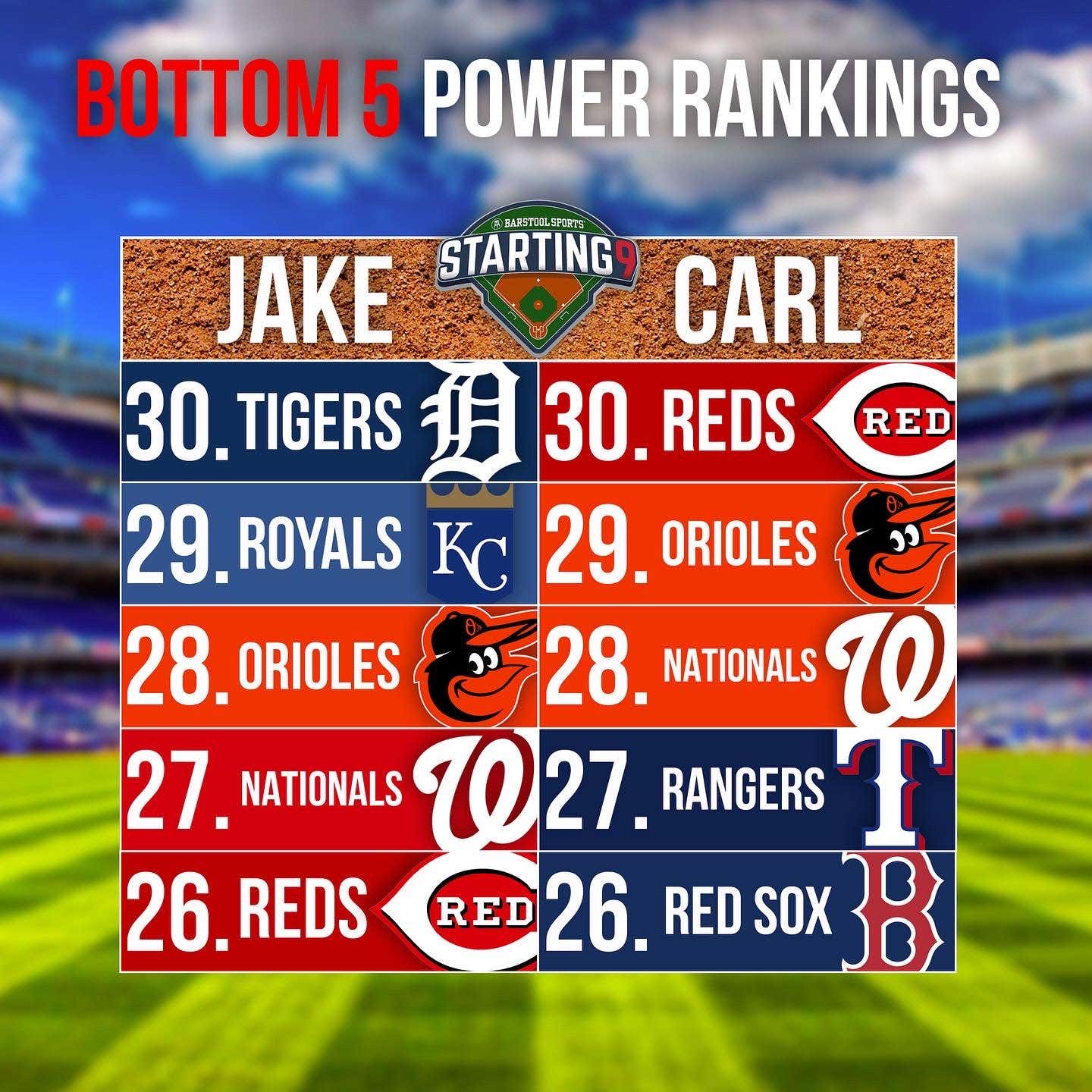 People are also freaking out that the Tigers are below the Reds from Jake and that I've included the Rangers despite them having the 4th best record in May and the Red Sox even though they're actually good on paper. Let me sort this mess out starting with my co-host.

- The Reds are actually hot right now. They're not as bad as the start suggest. They're terrible. But you're judging them on a different scale. Won a couple series with momentum now. Hunter Greene about to really get going. It's not preposterous to say that other teams suck harder. Even though I have them dead last. Just trying to see and say it from Jake's perspective.

- Elsewhere the Rangers are just so brutal to watch. I don't care if they're grinding out games. I don't care if I'm influenced by the shitty deal they gave Marcus Semien. I'm purely saying that I just don't like watching the Rangers play baseball. They don't pitch it. They don't catch it. The manager is an idiot. I KNOW THEY JUST SWEPT THE ANGELS. But I don't think they're good and I want to sell them down the river.

- The Red Sox need to wake the fuck up. That's where I'm coming from. Relative to expectations, they could have been dead last at the time of recording. I don't know how else to put it. They lose every which way and that needs to be accounted for. Surely they'll heat up as I explain in the MLB round up blog today. But they need a kick in the ass and that's what I'm doing at 26th this week.

Sorry if your team is on here. I'm starting to notice you guys are pretty fuckin sensitive about this stuff. That's not a perspective afforded to me from Barstool Chicago fairly often. If I say the Cubs suck it's because the Cubs suck. If we're talking about the Bears negatively it's because they deserve to be talked about negatively. I have a pretty open and honest relationship in all Barstool Chicago sports relations. And now I get access to the Starting 9 platform and you'd think I was fucking some people's sisters with how offended they get by saying the Rangers suck. Or that THE PIRATES AREN'T EVEN IN YOUR BOTTOM 5 OMG!!!!

I need to get a strategy in place to deal with these kinds of emotions. My knee jerk is to call you a pussy and encourage you to shut up. But I want you guys to feel comfortable bitching at me about your team. Come to me with your misery and disappointment. Just remember I'm not your GM and it's not my fault if you guys suck. Whether you suck more or less than those are you isn't nearly as important as you think it is.

More this week on Starting 9. Subscribe, unsubscribe, resubscribe and leave a review here.