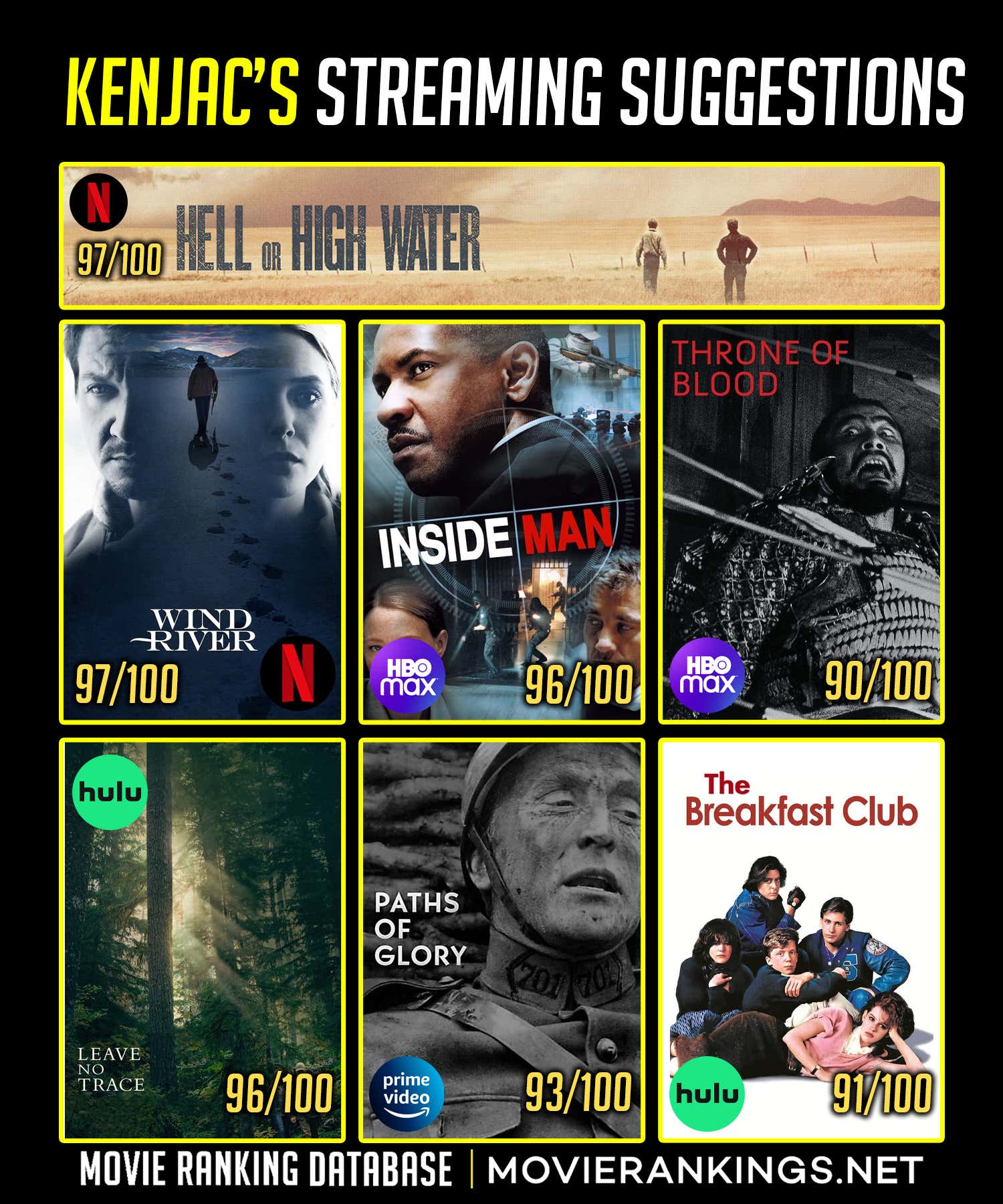 A divorced dad and his ex-con brother resort to a desperate scheme in order to save their family's farm in West Texas.

I recommend the Frontier trilogy a lot, but I just rewatched both this and Wind River over the last couple weeks and just had to put them both on again. Just pure masterpieces in the neo-western genre.

An FBI agent teams with the town's veteran game tracker to investigate a murder that occurred on a Native American reservation.

There are so many incredible things about this movie, but this scene takes it over the top. One of the most suspenseful moment's I have ever seen.

After carefree teenager Jay sleeps with her new boyfriend, Hugh, for the first time, she learns that she is the latest recipient of a fatal curse that is passed from victim to victim via sexual intercourse. Death, Jay learns, will creep inexorably toward her as either a friend or a stranger. Jay's friends don't believe her seemingly paranoid ravings, until they too begin to see the phantom assassins and band together to help her flee or defend herself.

If you're looking for a different kinda horror movie that's gonna fuck with your brain a little, this is the one. It is easily in the A-Tier of horror movies from the last decade.

When an armed, masked gang enter a Manhattan bank, lock the doors and take hostages, the detective assigned to effect their release enters negotiations preoccupied with corruption charges he is facing.

I was talking to somebody about this movie in the office recently, and reminded myself of how great it really was. It is one of the coolest heists I have ever seen in a movie and has killer performances from both Denzel and Clive Owen.

Returning to their lord's castle, samurai warriors Washizu and Miki are waylaid by a spirit who predicts their futures. When the first part of the spirit's prophecy comes true, Washizu's scheming wife, Asaji, presses him to speed up the rest of the spirit's prophecy by murdering his lord and usurping his place. Director Akira Kurosawa's resetting of William Shakespeare's "Macbeth" in feudal Japan is one of his most acclaimed films.

If you're looking to expand your horizons a little and watch an old classic, I have two movies on here for you. The first is Throne of Blood. It is a Kurosawa classic that features one of the best performances from one of the greatest actors ever in Toshiro Mifune as well as a crazy practical effect:

Cab driver Max picks up a man who offers him $600 to drive him around. But the promise of easy money sours when Max realizes his fare is an assassin.

I have two Michael Mann movies on the list here, and the first is one of my favorites. Beyond being one of the coolest hitman movies ever, it features the last great villain performance from Tom Cruise before the secret society forbade him from playing bad guys.

A young man is a reformed gambler who must return to playing big stakes poker to help a friend pay off loan sharks.

Come for Damon/Norton, stay for one of the great John Malkovich roles. If you ask me, it is the best gambling movie ever.

A father and daughter live a perfect but mysterious existence in Forest Park, a beautiful nature reserve near Portland, Oregon, rarely making contact with the world. But when a small mistake tips them off to authorities, they are sent on an increasingly erratic journey in search of a place to call their own.

This movie kind of flew under the radar when it came out, but it is one of the greatest and most emotional movies in recent memory. Ben Foster crushes me and the movie also served as Thomasin McKenzie's (Jojo Rabbit, Last Night in Soho) coming out party.

Five high school students from different walks of life endure a Saturday detention under a power-hungry principal. The disparate group includes rebel John, princess Claire, outcast Allison, brainy Brian and Andrew, the jock. Each has a chance to tell his or her story, making the others see them a little differently -- and when the day ends, they question whether school will ever be the same.

I shouldn't need to pitch you on the Hughes classic. I will say that I rewatched for the first time in a while recently and it is crazy how influential it is on future teen movies.

When their car breaks down, a couple on the run headed southbound for a fresh start in the Sunshine State break into a nearby house looking for a new set of wheels. What they find instead is a dark secret, and a sweet-as-pie pair of homeowners who will do anything to keep it from getting out.

Another movie that few under the radar, this one is freaky as all hell in the best way. If you like movies like the recent 'Fresh', you will love this.

Frank is an expert professional safecracker, specialized in high-profile diamond heists. He plans to use his ill-gotten income to retire from crime and build a nice life for himself complete with a home, wife and kids. To accelerate the process, he signs on with a top gangster for a big score.

The second Michael Mann movie in this collection, this is a heist movie that should be required viewing.

A commanding officer defends three scapegoats on trial for a failed offensive that occurred within the French Army in 1916.

In our war movie draft ft. Smitty, WSD and Chief, I took 1917 with my first pick. This lead to Chief and I lamenting how there aren't more WWI movies and how there are way too many WWII ones. This is an oldie, but it is one of the few war movies from that era that weren't outright propaganda

An inept taekwondo instructor struggles with marital troubles and an unhealthy obsession with fellow taekwondo enthusiast Chuck "The Truck" Williams.

A sneaky funny comedy that is underseen despite starring Danny McBride, this is a solid watch.