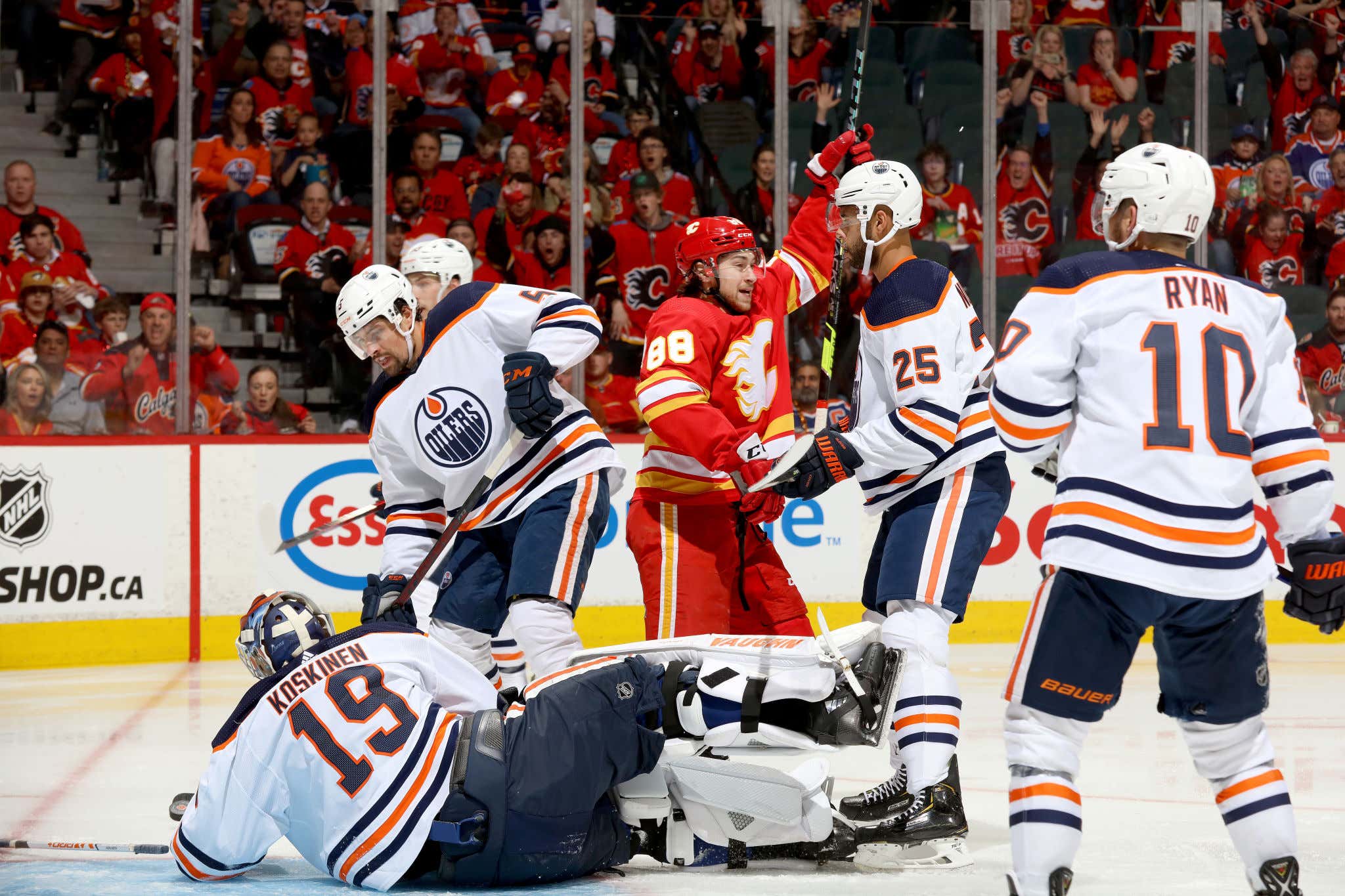 Anyone who was super pumped to see Connor McDavid, Leon Draisaitl and the Edmonton Oilers in the second round of the Stanley Cup playoffs got a pretty harsh reality check in Calgary early on. The Flames came out playing with their hair on fire, scoring two goals in the first minute of Game 1…As turns out, that was only the tip of the proverbial iceberg, LET ME TELL YOU.

You might be thinking, "Geez that seems pretty rare for a team to score two goals that fast in this type of high-stakes game." You'd be almost fully correct. It is, in fact, unprecedented.

All "MIKE SMITH IS WASHED!!" truthers got giddy real fast, because the 40-year-old veteran was chased in favor of Mikko Koskinen after conceding his third goal as Brett Richie skated toward the crease relatively unchallenged to light the lamp yet again:

Poor Smith. Just posted a 2.29 GAA in the Kings series and gets utterly ambushed. Might have been a premature yank. In fact I'm almost certain it was, because Koskinen couldn't have done much worse in Smith's spot.

The Saddledome is a tough place to win in, and especially when a heated rivalry is this lopsided so early on, it's an uphill battle to rally back. Thankfully for Edmonton, Connor McDavid is Connor McDavid and does Connor McDavid things when shit hits the fan:

A lesser player would panic here. Getting a loose puck right on the doorstep. Down 3-0. Every instinct telling you to just shove it in the net as quickly as possible. Nah. McDavid is different. Dude gets in at least three to four stickhandles to set up Calgary goalie Jacob Markstrom before going five-hole on him. Hooooooohh.

Yeah but the Oilers were still down 3-1. They'd go down 5-1 once Blake Coleman scored not one, but two goals to set the second-period tone. Evan Bouchard responded just one minute later at the 7:10 mark for Edmonton, only to see Matthew Tkachuk net the Flames' sixth goal of the evening at 8:24.

The over/under for the GAME was six. Mr. Ice was ripping off his shirt in celebration WELL before the final horn:

LOL I feel like an automaton generically recapping goals but I have to, like, feature some text in this post and not inundate you with a bunch of embedded highlight tweets. THIS one from Leon Draisaitl, on the heels of TWO GOALS FROM ZACH HYMAN is critical, however:

The play from McDavid there to keep that puck alive was fantastic. Sorry I have to gas up the biggest stars, it's the rules. It's also merited…because McDavid WASN'T DONE!!! One minute, 28 seconds after the second intermission…

Seriously though, I was trying to think of the last time, in the Stanley Cup playoffs or in NHL history, when two different players on opposite teams scored two goals apiece in the same period. Has it ever happened? I'm sure it has. Another rare sight nevertheless. Good on Coleman and Hyman.

Anyway, by the time McDavid was the catalyst for that Kailer Yamamoto goal to begin the third, the Flames had outshot Edmonton 40-19. Just shows you the skill and the quality scoring chances McDavid, Draisaitl and Co. can generate even when their team defense is flagging.

By this juncture of the proceedings, it was so far beyond "THIS GAME" or "THIS LEAGUE" or "THIS RIVALRY" reactions.

Reeling. Send help. Trying to encapsulate all the crazy shit that happened in this game? A waking nightmare.

BUT THAT'S WHY I'M HERE WHAT IT DO BAY-BEEEEEE!!

This snipe by Tkachuk pretty much put it out of reach for Edmonton:

Tkachuk tacked on an empty-netter to get a nice little hattie with 2:11 left on the clock, which was a nice little bonus and made, you guessed it, even more history.

OK that about covers it! Thanks Oilers and Flames for a PHENOMENAL Game 1 — and for NOT SCORING for a while to make my job at least a little easier down the home stretch. Sheesh, gotta save some offense for the rest of the way! I think we've had enough scoring for almost an entire series.

The fact that we may get six more games of this caliber of hockey in such a heated rivalry is…pretty cool. I'll be chuffed if any of this blog wound up making a modicum of sense.