In what was arguably the most formidable group of candidates in the 15 years of fan voting for the Patriots Hall of Fame, the people have spoken. This year's nominees were Logan Mankins, Mike Vrabel and Vince Wilfork. And, while solid arguments can be made on all sides, I have to agree with their judgment.

Here are some of the factors that led to Wilfork winning this hard fought election:

"It's my pleasure to announce Vince Wilfork as our 2022 Patriots Hall of Fame selection," said Patriots chairman and CEO Robert Kraft. "For more than a decade, Vince was a dominant defender in the trenches and anchored some of the best defenses in franchise history. His contributions on the field propelled the Patriots to four Super Bowl appearances during his 11-year career." ...

During his time in New England, Wilfork helped the Patriots defense finish in the top 10 in points allowed eight times. ...

While with the Patriots, Wilfork played in 158 games with 148 starts, and helped deliver a 123-35 (.778) record in the regular season during that span. The Patriots also played in 21 playoff games, six AFC Championship Games and four Super Bowls with Wilfork anchoring the defense. ...

In no way is Wilfork's first-ballot induction a slight toward the candidates he was running against. Mankins is not only the second best guard in franchise history behind only the GOAT, John Hannah, he's a member of the NFL's All-Decade Team for the 2010's, with seven Pro Bowls and an All Pro. Vrabel has one of each, plus three  rings. And 10 career receiving touchdowns in New England on 13 targets, two of them in Super Bowls.

As impressive as their resumes are, by no stretch of the imagination is there any shame in being runner up to Wilfork.

I will never forget that Saturday afternoon in 2004 when Wilfork fell to the defending Super Bowl champs as they sat there with the 21st pick. They had lost Ted Washington after the season, and he left a gaping hole in the middle of the league's best defense. Wilfork was expected to go in the Top 10, most likely to Jacksonville with the ninth pick. Instead the Jaguars went wide receiver at that spot. And as the next few picks came in, my brother Jack and I started to realize that none of the teams ahead of the Pats were considered to be in the market for defensive line help. And those that might be (Chicago took Tommy Harris at 14) played the kind of 3-4 front that required a big, space-eating, two gap nose tackle like Wilfork was. And without making a move, Bill Belichick landed the perfect guy for his biggest area of need. The expression everyone was using was the exact same: "The rich just keep getting richer." It was beautiful to behold.

And right from his rookie season, Wilfork rewarded us for our optimism. There were some growing pains as he adapted to a life as a full time double team magnet. I recall the coaches making the adjustment of moving him off the line of scrimmage a step or two in order to keep him from getting lost in the wash of combo blocks from a center with guards he couldn't see coming. And it worked. He didn't miss a game all season. He anchored the middle of the Pats defensive front between Ty Warren and future NFL Hall of Famer Richard Seymour. And the unit as a whole gave up the second fewest points in the league. And held Peyton Manning's Colts, the best offense in the league (32.6 ppg), to a field goal in the playoffs on the way to a 17-2 record and the franchise's third championship. Without Wilfork at the point of attack all year, it's possible none of that happens.

It's fitting that he bookended his Patriots career with rings, 10 seasons apart. And in between he was an absolute icon. A part of the fabric of life in New England. From his off the field moments like the time he was leaving Gillette after winning the AFC title game in 2011-12, and driving home with his family when they came upon a flipped over SUV and Vince reached in through the window to pull the driver to safety. To to the on the field moments like this gem:

To the play that will live on long after all of us have shuffled off this mortal coil:

It would be great if Vince Wilfork got serious consideration for Canton. But there's a natural tendency against inducting interior D-linemen unless they put up great pass rush numbers. And that was never VW's game. He was the guy who made the offense have to dedicate resources in order to control him and let others make the stat sheet. But Patriots fans knew what he brought to the battle, game in and game out for 11 incredible seasons.

Mankins and Vrabel will get their red jackets too. But for now, it's time to make one in XXXL. 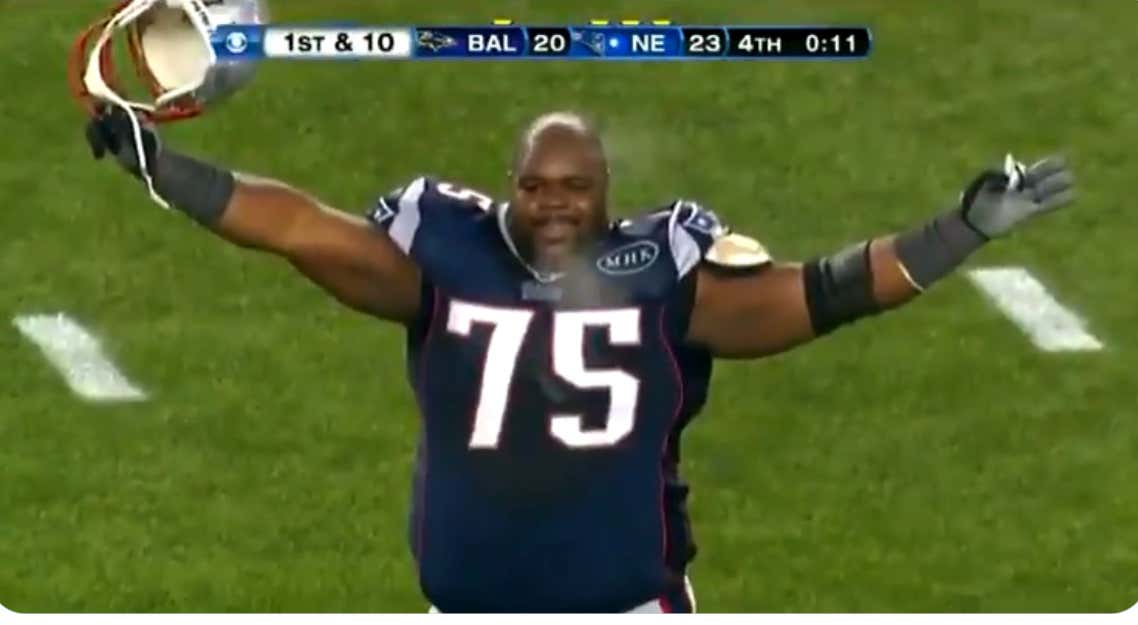