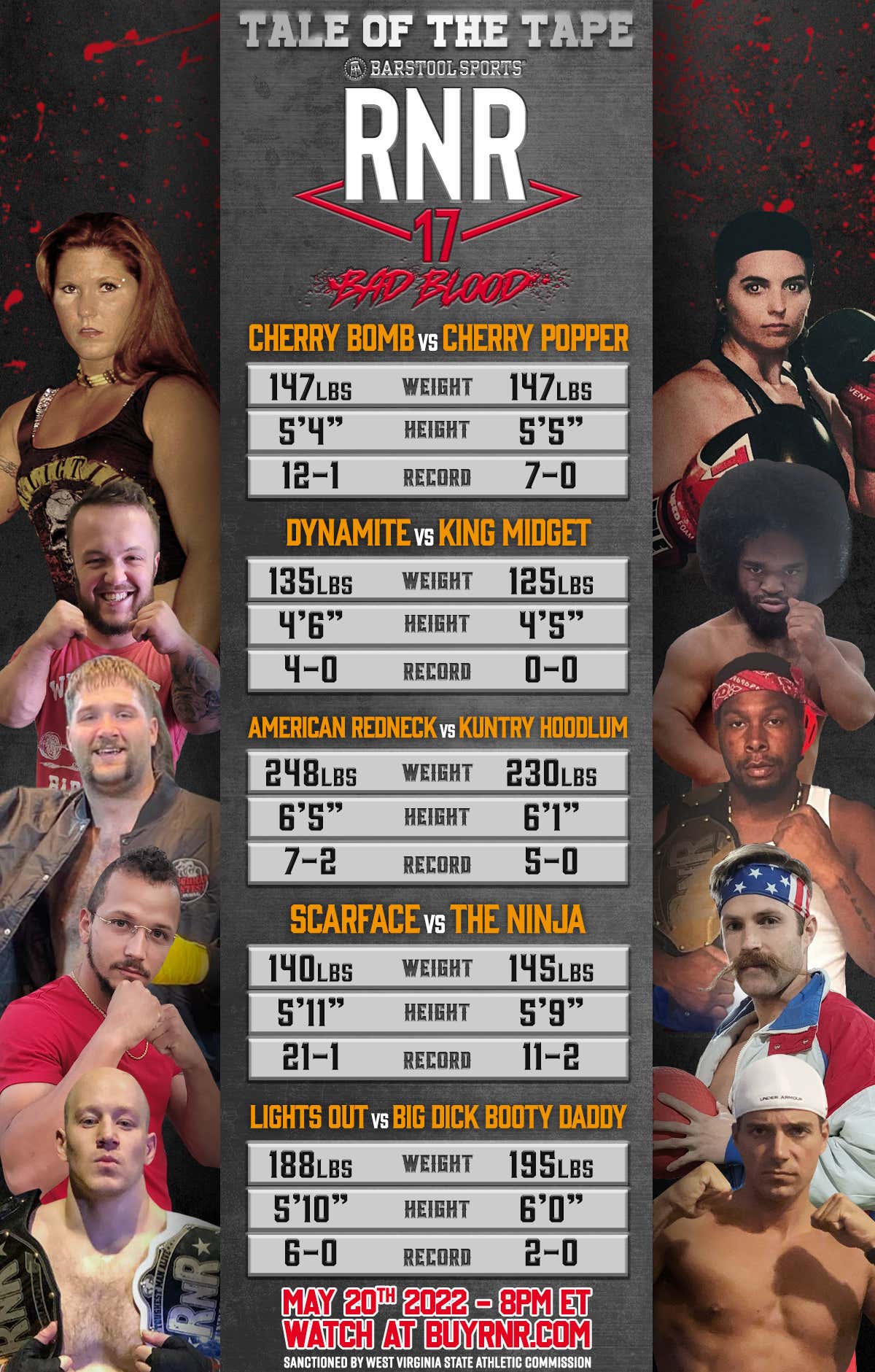 We got 25 matchups with NO HEADGEAR coming this Friday night at #RnR17 plus 5 title fights and a live ring girl contest hosted by Large & Frank The Tank. Dave, Dan, Robbie will all be back on commentary and Caleb will be interviewing the fighters ringside along with PFT who's filling in for Rone (taping a secret Barstool reality show)

Large & Frank will also be hosting the weigh-in livestream at 7 pm on Thursday, which will get released as an edited video later that night too. There's a matchup breakdown coming from Rone & PFT later this week, plus an incredible 10 minute documentary on BIG DICK BOOTY DADDY vs LIGHTS OUT LAING releasing on Wednesday that is an absolute must watch. Even if just for the graveyard cardio alone…

Click below to get RnR17 with 48 hour replay and scroll down for a preview of our 5 title fights. Full card coming SOON.

DYNAMITE vs KING MIDGET for the BMFD Title

Few champions in sport are as unstoppable as Jeremy Smith. He's 4-0 with decisive victories in each fight and if not for Bobby Laing, we would be talking about DYNAMITE as the greatest pound for pound fighter RnR has ever seen. Whether it's fighting our legends like SMIDGE THE DOORMAN or WWE royalty like 'SWOGGLE, the BMFD champion has always impressed with pure power + absolute precision. Tough combination to beat… On top of being the strongest dwarf in the world.

His challenger KING MIDGET comes from a wrestling background both on the mat and in the ring. He's coming from Oklahoma City just to take on the champ and doesn't seem to have an ounce of fear in him. Despite the 1 inch height difference he may have more speed which has worked a bit in the past. But I think Jeremy Smith makes history here and delivers our 1st dwarf knockout ever.

Prediction: DYNAMITE in 2 rounds by KO

CHERRY BOMB vs CHERRY POPPER for the Women's Title

Speaking of all-time RnR fighters, can't make the list without putting CHERRY BOMB near the top. She's had some legendary battles recently but has also always delivered under the bright lights, especially back at RnR8 in Welch, West Virginia…

She faces 1 of her toughest tests yet in CHERRY POPPER who hails from Pittsburgh, PA and is (7-1). Doesn't even have the time for trash talk because she's training that much. But she's never fought in RnR before that's her record outside our hallowed halls. Can't beat experience and that's why I'm going with the jacked country girl to inflict pain once again.

SCARFACE vs NINJA for the Lightweight Title

If you're picking a fighter out of this card to win you a multi-day tournament, SCARFACE may be your man. Slippery quick with a powerful jab and just seems to know what you're gonna do before you try to do it. He's a 2x Lightweight champion for a reason and this could be the start of a Bobby Laing type run right now. 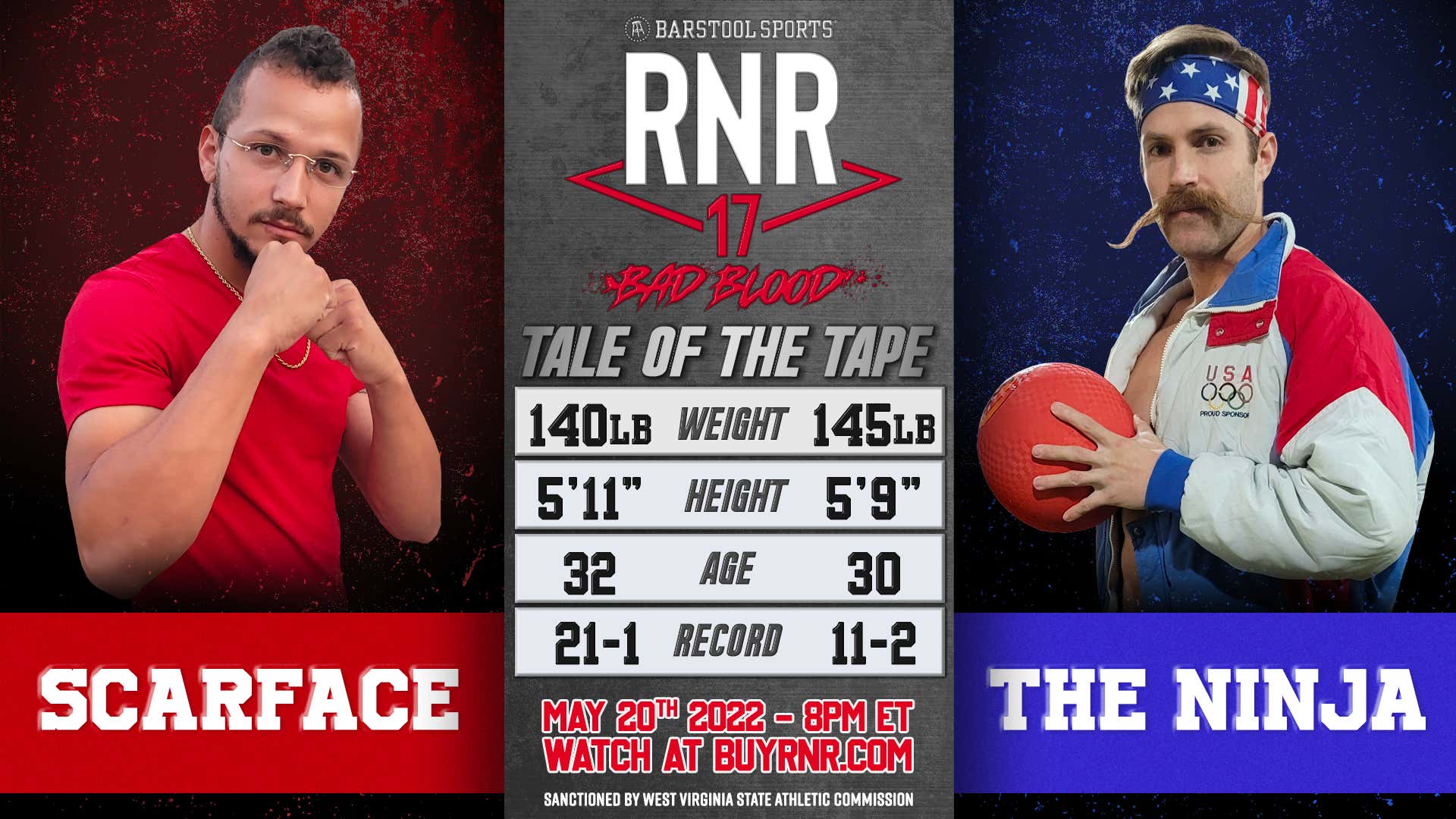 But the challenger's side is no joke either, even though he does somehow pull off backflips in the ring. NINJA has been in some wild fights, some violently brutal matchups, and always come back for more. He's also holding multiple Guinness World Records, 1 of which being running the mile backwards the fastest? Demented. That may not help him in a boxing match but he definitely has the best stamina & cardio on the card, so anything is possible here if he can simply outlast the champ. Either way, NIGHTY NIGHT wants next…

Prediction: SCARFACE in 3 rounds by decision

AMERICAN REDNECK vs KUNTRY HOODLUM for the Super Heavyweight Title

KUNTRY HOODLUM is another fighter who has beaten some true RnR legends and always finds a way to get his hand raised after the final bell. He arrived as an undefeated (10-0) streetfighter and has continued to be undefeated through 5 matchups here, so the power is legit. This may be his toughest matchup yet though.

AMERICAN REDNECK is one of the best fighters from Toughman, a rival fight promotion in the West Virginia area. He's got big size along with a (7-2) record over there so this fight could be an absolute slobber knocker. Either way there's no doubt that 500 lb SLAP FOR CASH is licking his chops waiting for whoever wins. Or does there need to be a rematch with VITO THE TORPEDO first?

I can confidently say there will never be a more disrespectful matchup in boxing history. Never again will a fighter like BIG DICK BOOTY DADDY not only guarantee a KO win, but also a night with his opponent's wife + mom where BDBD has a kid with the mom and names it after his opponent, for his opponent to then raise. And that's just the tip of the iceberg with BDBD. It helps that he is (2-0) with 2 KOs… but what happens when he gets hit by real life Bane from Braintree, MA? 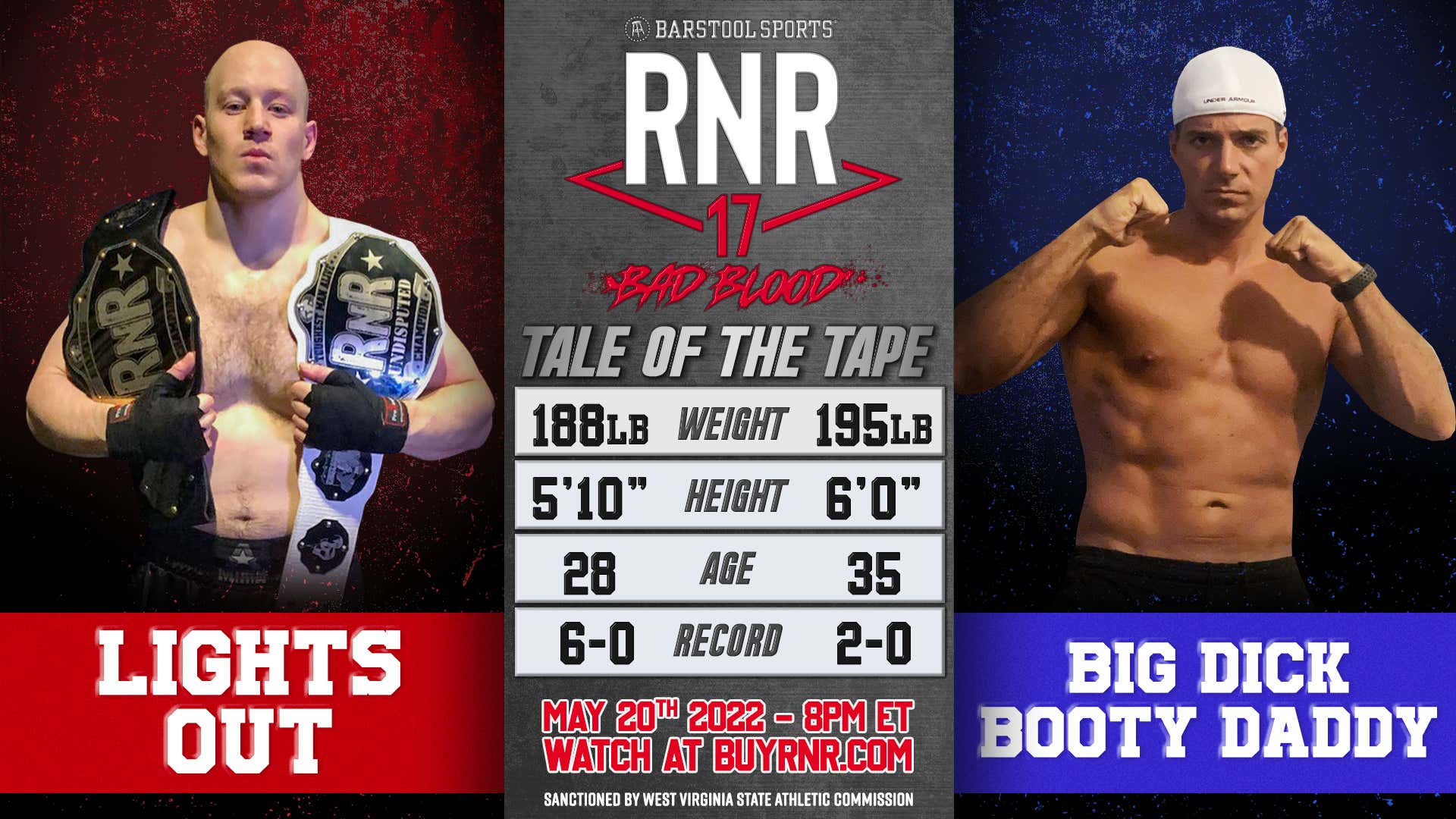 Because LIGHTS OUT LAING isn't just (6-0) in RnR, he's undefeated with some of the most impressive wins ever witnessed in our ring. Took down Travis Turman aka THE OLD MAN IN JEANS despite a 60 lb weight difference, defeated PACMAN JONES in his home state with the entire crowd against him, cut down to 180s to win against the middleweight champion NIGHTY NIGHT, all he does is win. Along with training like an absolutely savage maniac. That is a man who fights with the power of belief.

Prediction: Find out Friday night at 8 pm ET on BuyRnR.com 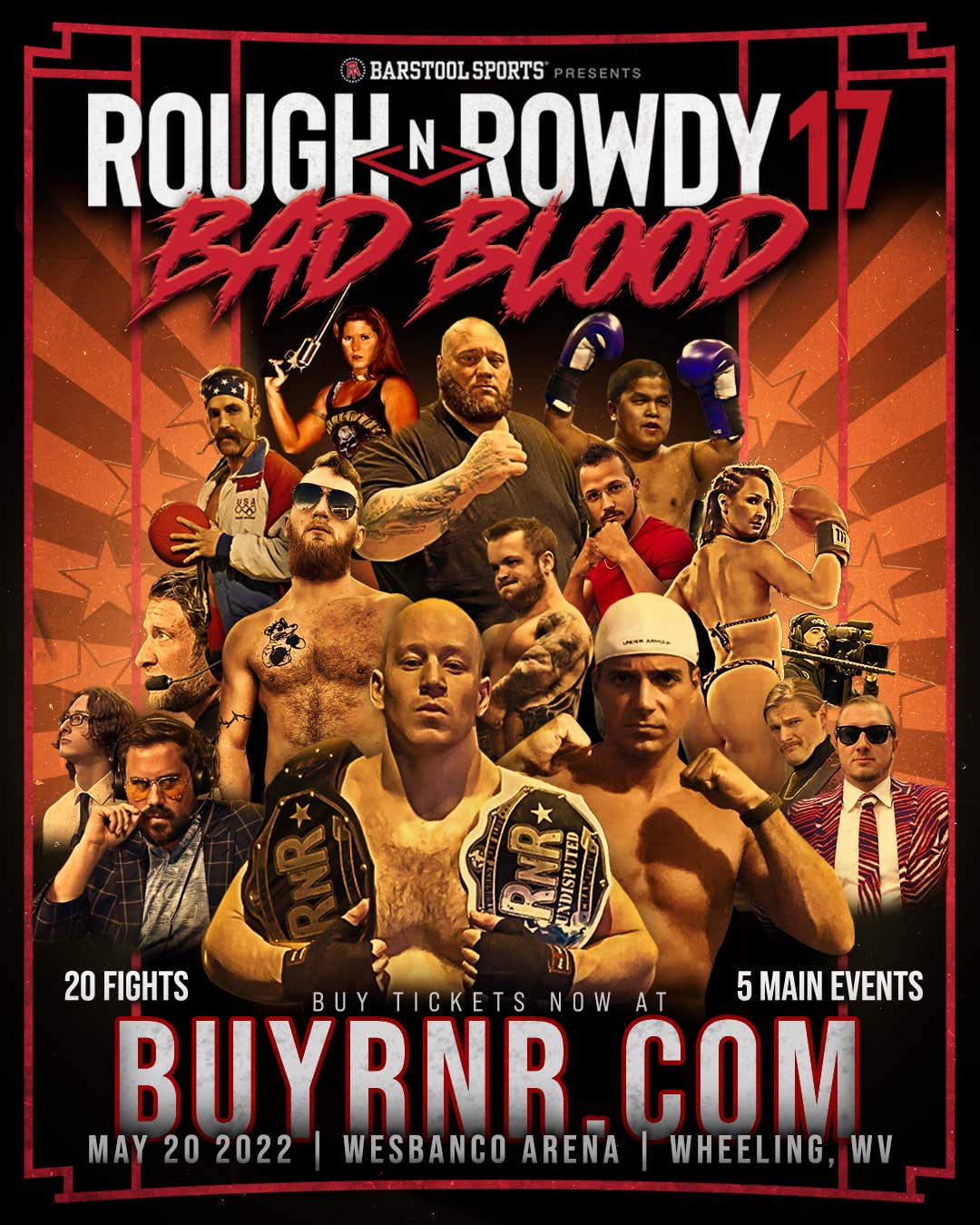