As I was cramming for The Dozen Tournament II on the train yesterday, I was going over early 2000s 1,000+ yard Wide Receivers and I stumbled upon a wild crop of WRs. Big Cat sent a nice pump up message and I followed up with some funny findings that could potentially be topical in our match later that day. 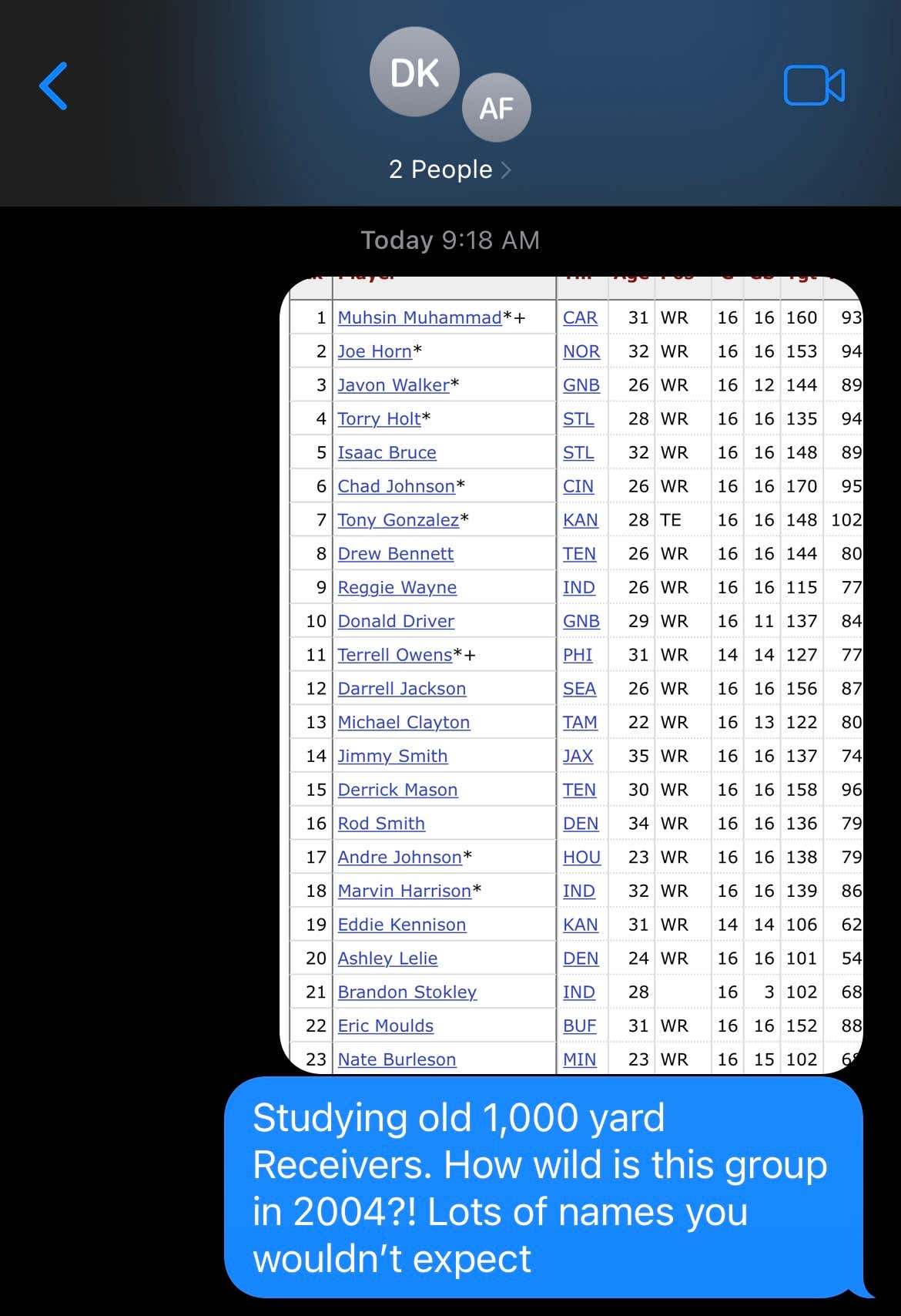 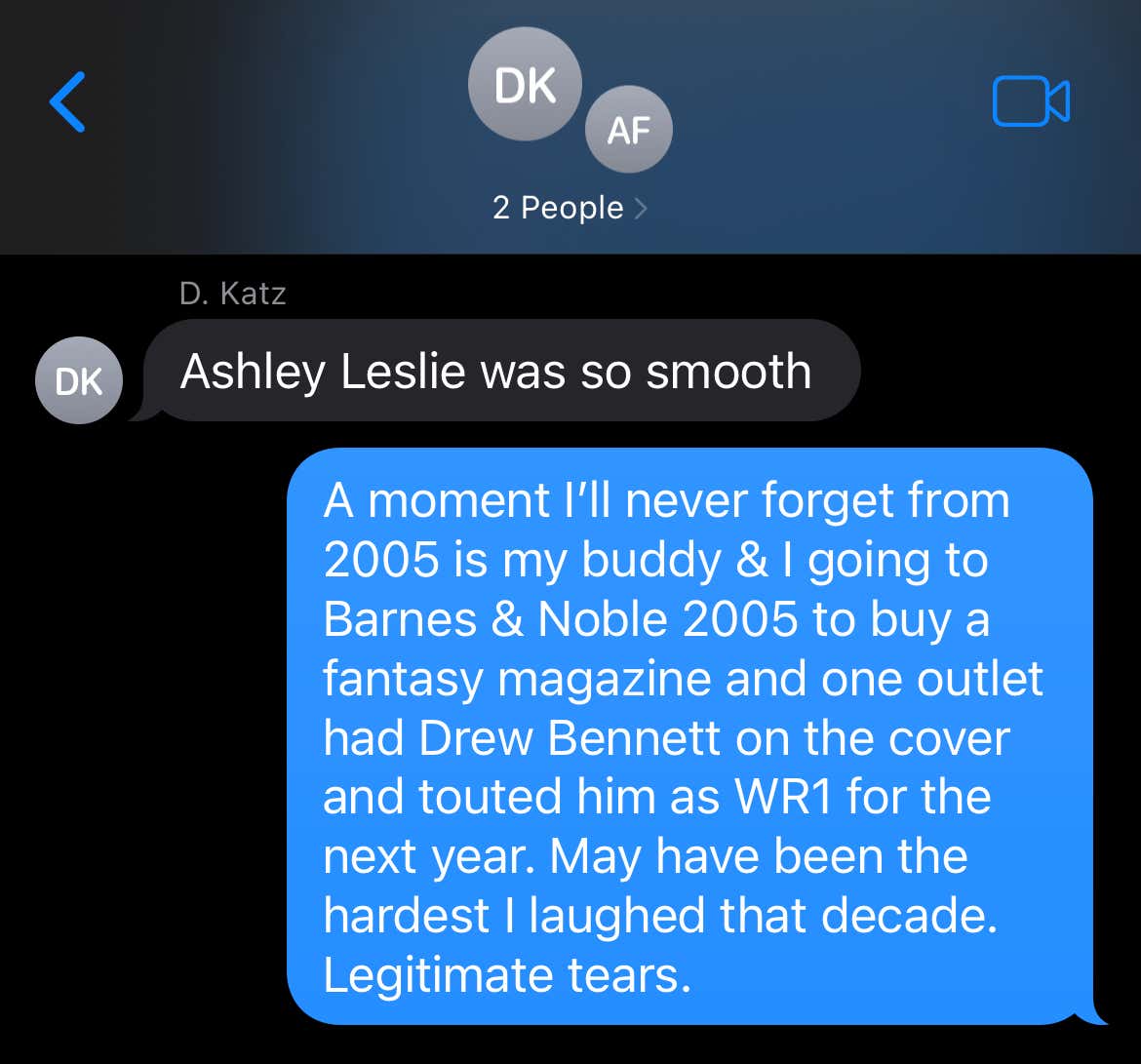 As a fantasy football nerd, going to Barnes & Noble at the end of June right before a nice beach trip around the 4th of July was the best. You pick up some nice reading materials that you'd absolutely wear out on the sand of the Jersey Shore the next week. The fact that a legitimate publication touted Drew Bennett, as the WR1 of the upcoming year was so funny to me it made me cry. So let's start the rankings there:

The only way this clip could be more accurate is if it was actual video of me from 17 years ago.

No this is not that funny now, but in 2010?! Hilarious. I recall exactly where I was at the time. I was in my apartment on 54th St. The video of someone's wedding party doing a very coordinated/non-traditional (at the time) entrance to Chris Brown's song "Forever".

The first time I saw that viral video (casual 103M view) I laughed a lot and obviously it's gotten stale in the 13 years since, but at the time The Office dropped this, I laughed so loud I legitimately thought my neighbors might complain.

My sophomore year of college, there was a week when food poisoning was very hot in the streets. Everybody and their mama was getting it in Long Island. Some bad chicken must have gotten shipped somewhere. We all thought we were in the clear and were playing beer pong at my best friend, J's suite. In the suite, there were two rooms with two beds each, a common room, and a bathroom. Unfortunately, one night, my buddy AB ordered a chicken parm. The whole night he was good. It was a typical Thursday. We deleted about two cases of Keystone Light and actually called things a bit early as he was feeling a little woozy. The next morning I got an instant message from my one of my friends asking if I've heard from AB. He told me that he was throwing up all night and they had paramedics come in and take him on the hospital.

We were worried about our buddy, so we drove over to see him the next day. The group from Thursday night was all in the room and J was telling everyone how he took care of the suite and not to worry. He had cleaned up the bathroom and it was all good, so not to feel guilty about that. AB thanked him and told us the story from his perspective. How he didn't feel well and had the runs all night and then couldn't stop throwing up. He threw up so hard he cracked a rib. At that point he was unable to move much and was just throwing up and pooping non-stop on the floor. This prompted my buddy J, who just cleaned the entire bathroom to blurt out, "That was poop?!" which resulted in an uproarious laughter we still joke about to this day.

I realize the movie came out in 2006, but I did not see in in theatres. A buddy of mine had the DVD and said it was super funny. At 21 years old and having almost exclusively free time, I was able to pick movies off a single recommendation, whereas now it feels like an entire court proceeding must be decided before agreeing on a movie to watch. I had extremely low expectations. I knew it had some Oscar buzz, which is somewhat unusual for a comedy out of the blue. Sasha Baron Cohen had been a success with The Ali G Show, but I never watched that and he was never really on my radar outside of that. So to be hit in the face with this brilliant comedy was an unexpected delight that resulted in hours of belly laughing.

I played a lot of Madden growing up. One of my favorite moves when building a roster was to get a big beefy runningback and convert them to a fullback. In the mid-2000s, my main guy was Najee Davenport. At 6'1" 247 lbs., he didn't have great speed for a Runningback, but a Fullback?! Boy, howdy! Now we're talking. He had elite speed for the position, could catch (shoutout PA FB Flat from almost any variation of the I-Formation), and was a serviceable blocker. Now when building a franchise with my buddies down the hall and playing with Davenport a lot, one of the elder statesman who was a bit more up on the news regaled me with a story about my converted Fullback.

Davenport had been charged while at the University of Miami of breaking into a woman's dorm room, going into her closet, and pooping in her clothes hamper. An absolutely absurd crime.

MIAMI -- A woman sued Green Bay Packers fullback Najeh Davenport, saying he invaded her privacy by breaking into her dorm room and defecating in her closet.

Mary McCarthy was seeking more than $15,000 in damages for emotional distress and invasion of privacy in a lawsuit filed Thursday in Florida Circuit Court.

Criminal charges were settled in October 2002 when Davenport agreed to perform community service. He denied breaking into the Barry University dormitory.

According to police, Davenport entered a dorm room at the small Catholic university in suburban Miami in the early morning hours of April 1.

Mary McCarthy, asleep in the room, told police she was startled awake by a strange sound and saw a man squatting in her closet. The man, later identified as Davenport, had defecated in her laundry basket, police said.

The suit said Davenport's conduct was "so outrageous in character and so extreme in degree as to go beyond all possible bounds of decency and, further, can only be deemed atrocious and utterly intolerable in a civilized community."

Having zero knowledge of this prior, I burst out laughing as it was just so absurd and involved poop, which is always funny. And again, it was topical as he was my guy in Madden.