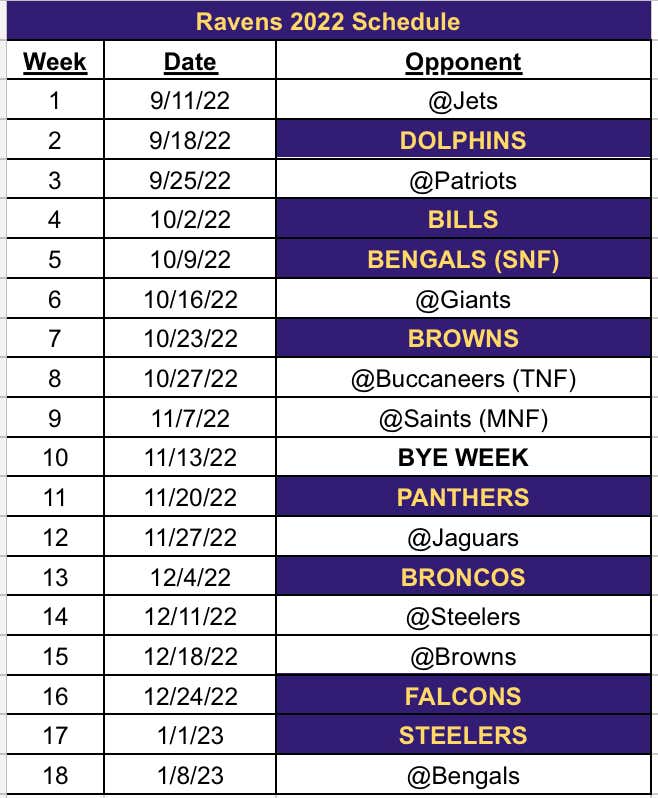 Here we gooooo. After a lost season where everything possible went against the boys in Baltimore, we now know when and where the Ravens will be exacting their revenge on the league. Plenty of random thoughts on it so let’s dive on in.

- First and foremost, that first 4 weeks really jumps off the page. All 4 AFC East teams to kick things off?! Gotta feel good about their chances at a 3-0 start and then a ginormous game at home against Buffalo. Been wanting a crack at them ever since that playoff loss in a windstorm 16 months ago. Cannot believe that’s not a primetime game, but we’ll be ready to roll at home against another AFC favorite

- 3 primetime games is a bit surprising. Lamar Jackson is a hot ticket and there’s a ton of tasty matchups on the schedule, so you might think there’d be 1 or 2 more. None of those being the Steelers is most surprising, but I think that’s a statement on where that team stands moving forward

- We knew we’d be seeing Wink Martindale at some point, and now we know the date. That roster is pretty bleh, but I don’t think anyone on the planet has better intel on how to stop LJ than Wink. And he’s got the motivation too. One to be on our toes for.

- A lot of folks are speculating that Week 7 could be DeShaun Watson’s debut after a potential 6 game suspension. I invite that shit. You’re telling me I’m supposed to fear a guy who hasn’t seen real game action in close to 2 years in his first game back? The same guy that got smoked 41-7 in Baltimore 3 years ago? I’m here for it.

- I’m so ready for that final game in Cincinnati to be for the division. And maybe even the AFC bye. Could not be more confident after the draft and the rest of the off-season that we’ll be neck and neck with them all year. All of that is contingent on Lamar’s health of course. Cannot wait to play meaningful football again. LFG.