Source - An annual lake party in Florida descended into chaos as a brawl broke out among a group of revelers on Saturday, report said.

The caught-on-camera melee at the event dubbed “Mayhem at Lake George” unfolded on and around a DJ deck anchored in the water. One person suffered a serious head wound during the fight, WESH 2 reported.

“People are just out there to have a good time, but like anything else, when you have a huge concentration of people like this and you have alcohol involved, you do have some incidents,” Volusia County Sheriff Mike Chitwood told the news outlet.

The only thing, and I mean the ONLY thing that's missing from this video is the sound. And I'm not talking about the guys in the helicopter, I'm talking about the scum on the ground. Can you imagine the insults that were being hurled around during that brawl? The cursing? The screams? The absolute vulgarity that only a drunk Floridian can posses? I debated calling this an "all-time" white trash brawl because we can't hear anything, but visuals make up for it. Just hundreds of blacked-out, shirtless, neanderthals in waste-high piss water beating the shit out of each other. Literally blind side tackling innocent bystanders for no reason whatsoever. You can kinda see it in the bottom right of this picture... 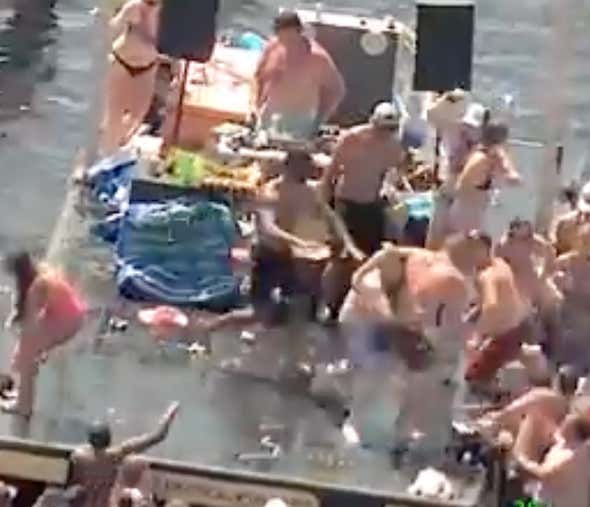 And what was the result? Five arrests and forty "boating citations"…whatever that means…

Five people were arrested during the party, three for boating under the influence and two for disorderly conduct, the sheriff’s office told USA Today. Nearly 40 boating citations were also issued, the report said.

Not bad considering everyone involved was trying to kill each other. The whole thing reminded me of the Gathering of the Juggalos minus the mental illness. Just a bunch of endomorphs (look it up) whose entire self worth is based on how alpha they're perceived in the eyes of their peers. Smooth brain city. I can't think of a grosser environment to be in. That's it for this one. And if you're in the Lake George, Florida area this summer…don't be. Now ake it away, Kat…