A new entry into the nearly endless franchise that is Marvel means it's time to re-tier and separate the shit from the elite. Let's get started! 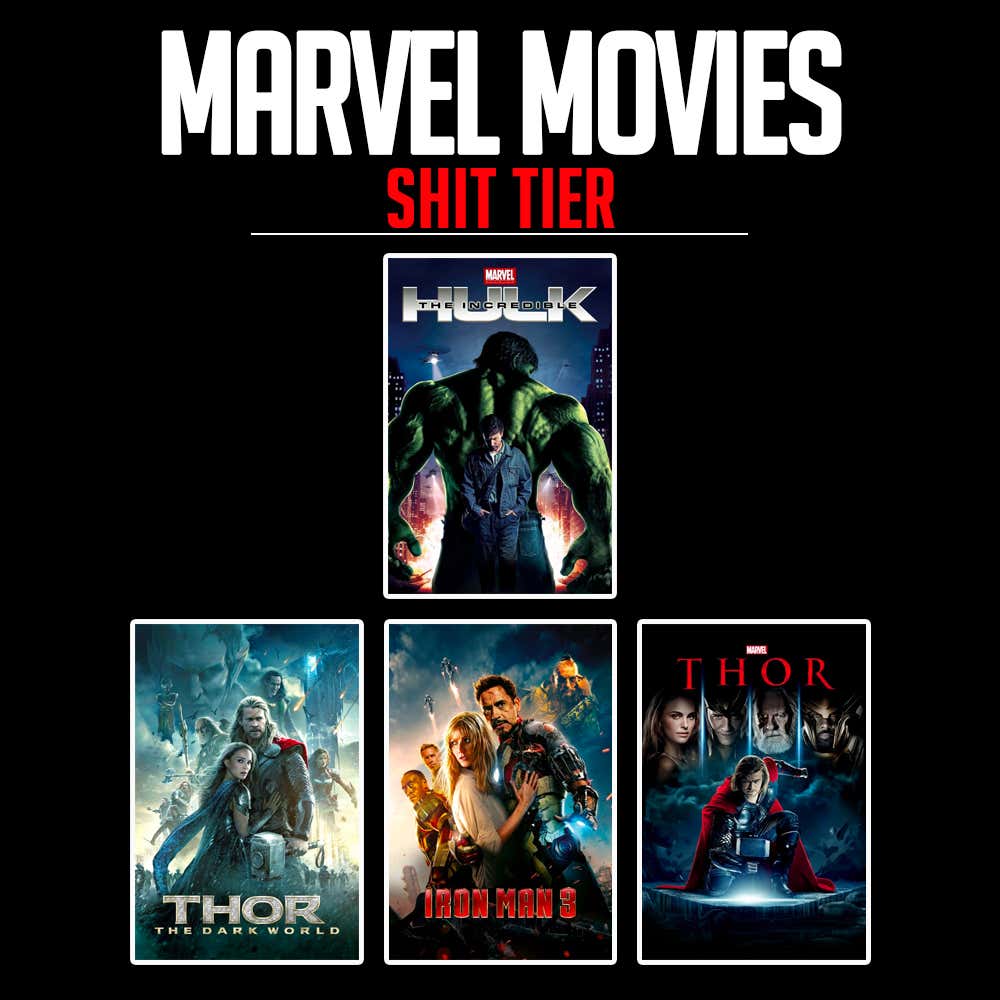 The Incredible Hulk can barely be called a movie. It is bad on it's own, and holds up even worse in comparison to to how much better every Marvel movie after it was. The first two Thor movies are so moody and serious that they really go against the grain of Marvel's general vibe. I can easily say that was my least favorite Avenger until Ragnarok came around and did a full turn on his character. Iron Man 3 is the worst entry into Iron Man. Guy Pearce sucked as the antagonist and their Mandarin fake out was so god damn stupid. This is also another movie that reminds me, more than the rest, of how much Gwen Paltrow hates acting. 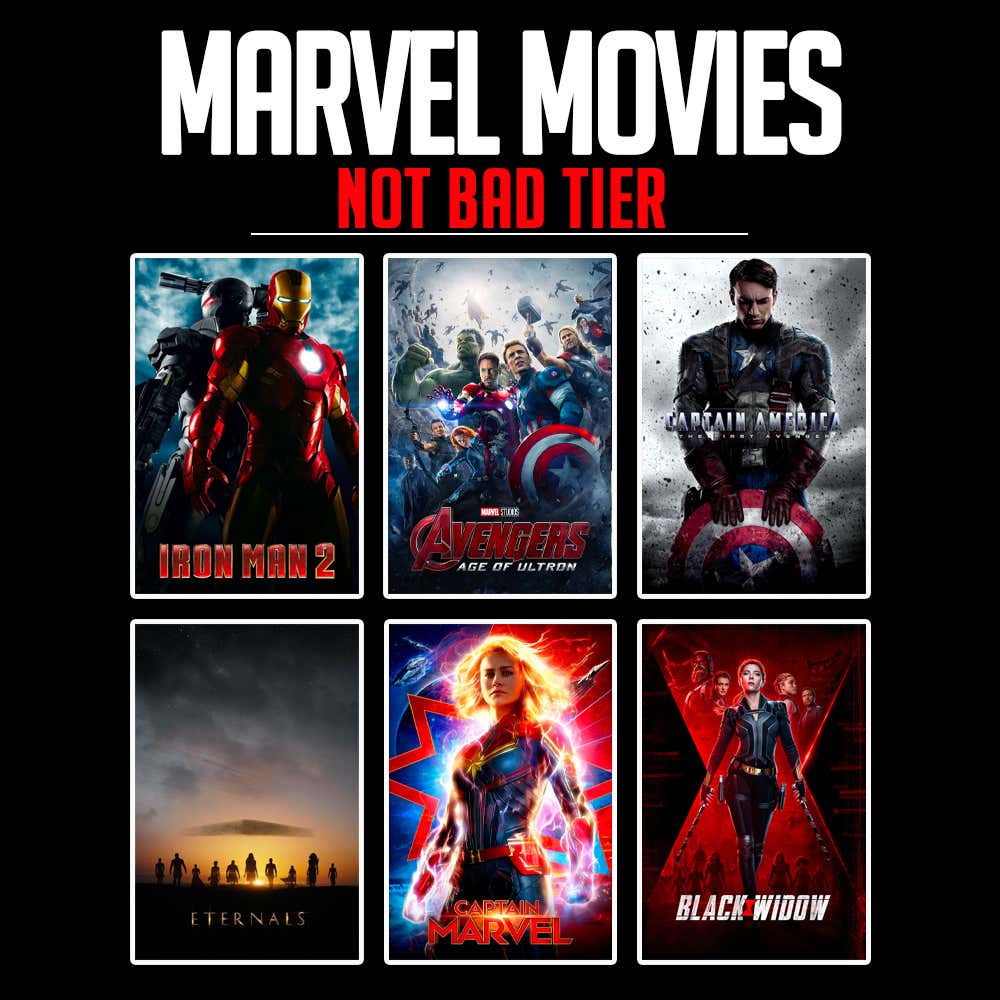 Iron Man 2 had a really hard task living up to Iron Man 1, but it did some things right. I think Sam Rockwell's version of Hammer was pretty good, especially in the opening court scene. Vanko wasn't bad either, but the final fight was just kinda boring. Age of Ultron should have been great, but just ran a little long. Ultron himself also needed to just do more. The First Avenger is ok, but also one of the corniest in the MCU. Eternals had great visuals and some cool characters, but just didn't hit on the story level like I wanted it too. Captain Marvel had some cool fights and made good use of the 90s setting, but also lacked a satisfying antagonist. Black Widow had some cool fights and great side characters, but that ending CGI still bugs me and it also had a villain problem. 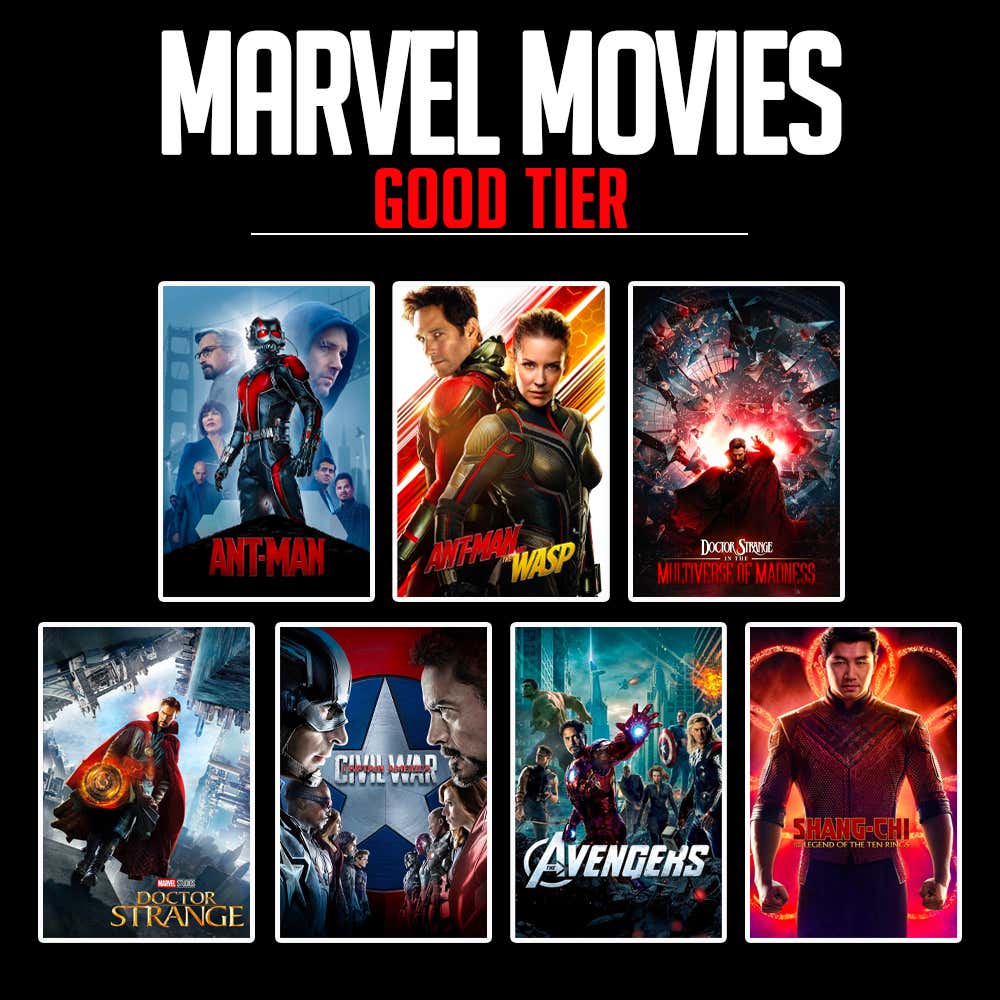 Both Ant Man movies suffer from villain problems but the franchise-best humor takes both of them over the top and into this tier. The first Dr. Strange gets in here on the back of incredible visual effects and the best-built micro world in the franchise. Dr. Strange 2 makes it in on the back of fantastic fight sequences and an INCREDIBLE villain. Civil War is a movie that you might think should be a tier higher. However, I think Zemo may be the worst villain in marvel. His entire plot in that movie relied on the most insane series of coincidences and chance happenings that I had to drop it down one. The OG Avengers showed that the compilation movies could not only work, but they were a massive success. Without that movie, we would not have the same MCU we have today. Shang-Chi is second only to Dr Strange 1 in building a micro world, and it features some of the coolest fight sequences in the franchise. 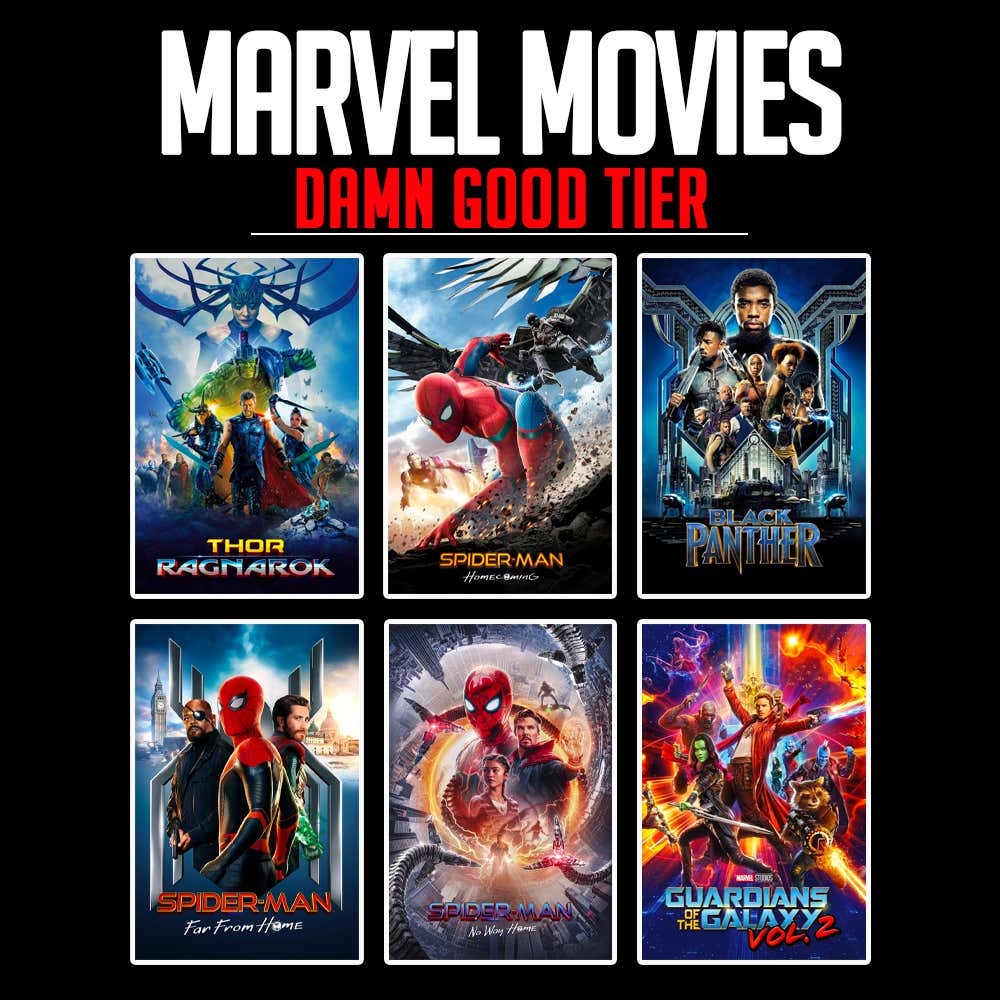 GotG 2 doesn't have the same juice as the original, but I think it had a phenomenal antagonist in Ego and some incredibly emotional moments. Also, it is the best in the franchise at combining humor, music and action. Spider-Man 3's plot suffered for the sake of the big-ass returning cast list, but that didn't make their moments any less special. Spider-Man 2 did some of the best illusion work I've ever seen in a movie and had a great villain in Jake G. Black Panther had one of the best villains in the MCU and built another one of the best micro-worlds in the franchise. Spider-Man 1 is the best spider-man movie ever in my opinion, and did a great job showing off the teen-angst version of Spider-man while also giving him a legit villain to fight. Like I mentioned with Thor, Ragnarok managed to flip the entire script on a lame character and turned him into one of the best. Thor and Hulk made for a great combo and Valkyrie/Korg were incredible additions. 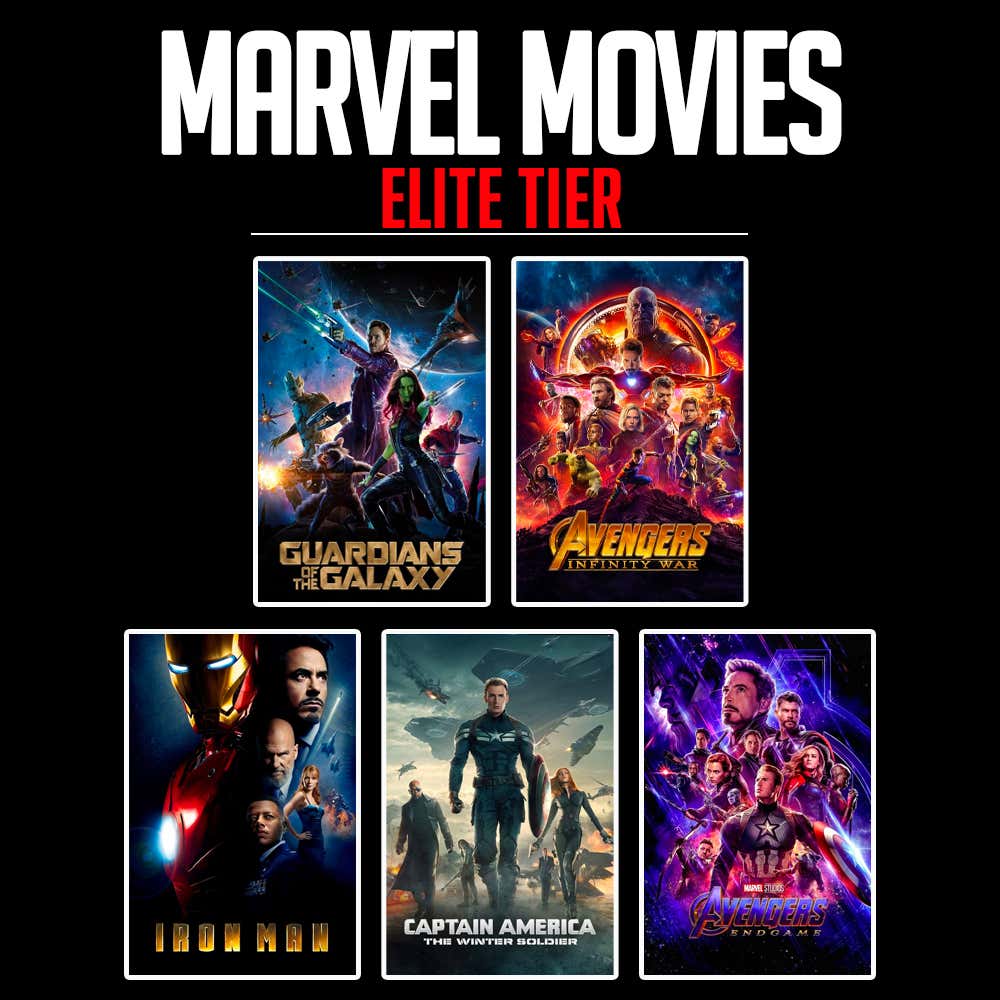 Both Endgame and Infinity War hit on so many great levels. To this day, I've never seen a theater react like they did to the big moments from those movies. Winter Soldier is unquestionably the best Captain America movie in my opinion. It combines the superhero-lite powers of Cap and Bucky with a legitimately great espionage plot and also delivers some of the coolest fights in the franchise. Iron Man is the blueprint for the entire MCU and for good reason. It had the humor, it had the drama and it had the great special effects to draw us all in. Obadiah Stane might not be the best villain in the MCU, but he isn't the worst either. Guardians remains, to me, the best movie in the MCU. The perfect combination of great characters, fantastic music, excellent action, and dramatic moments. FLAWLESS! 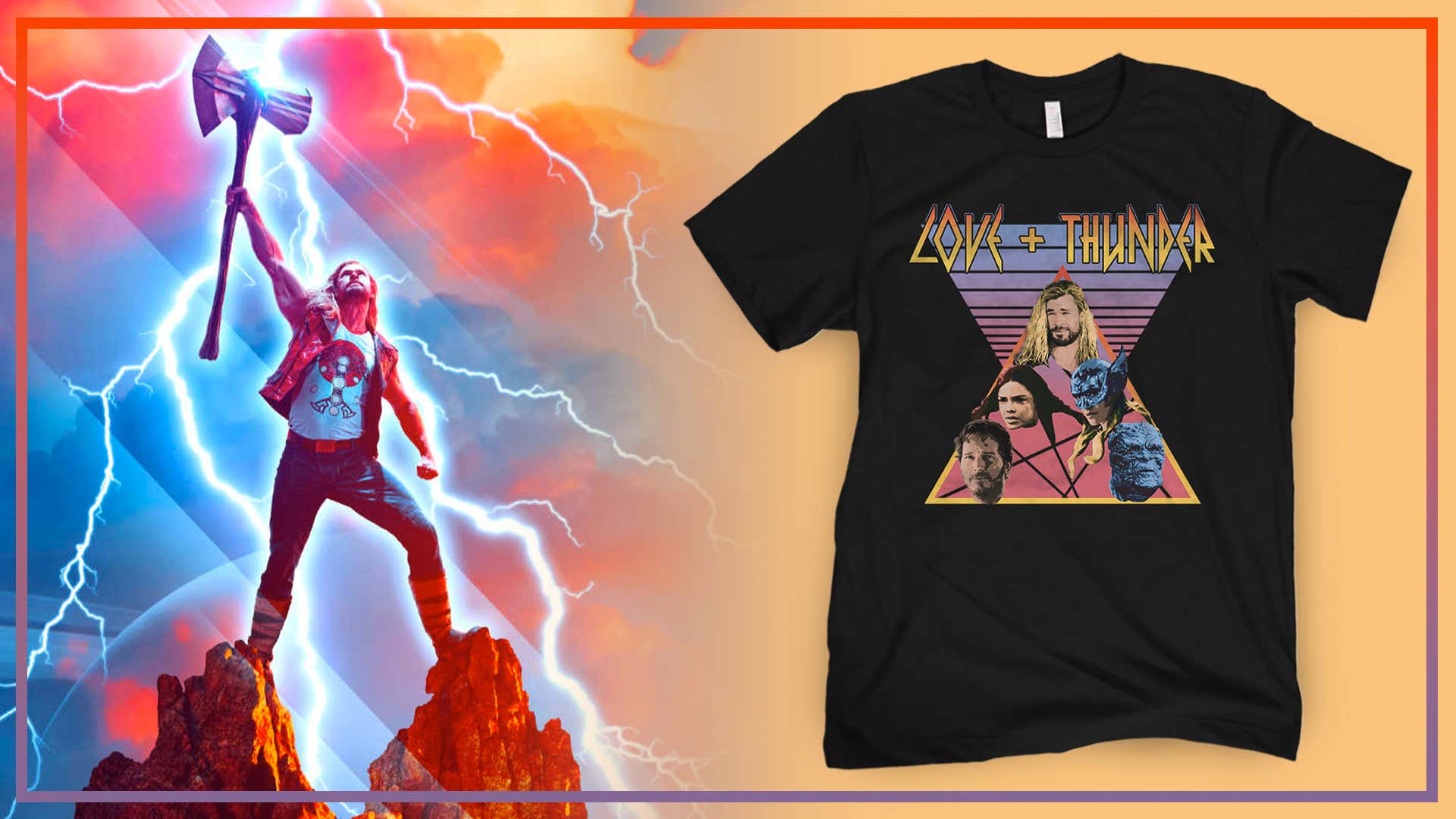