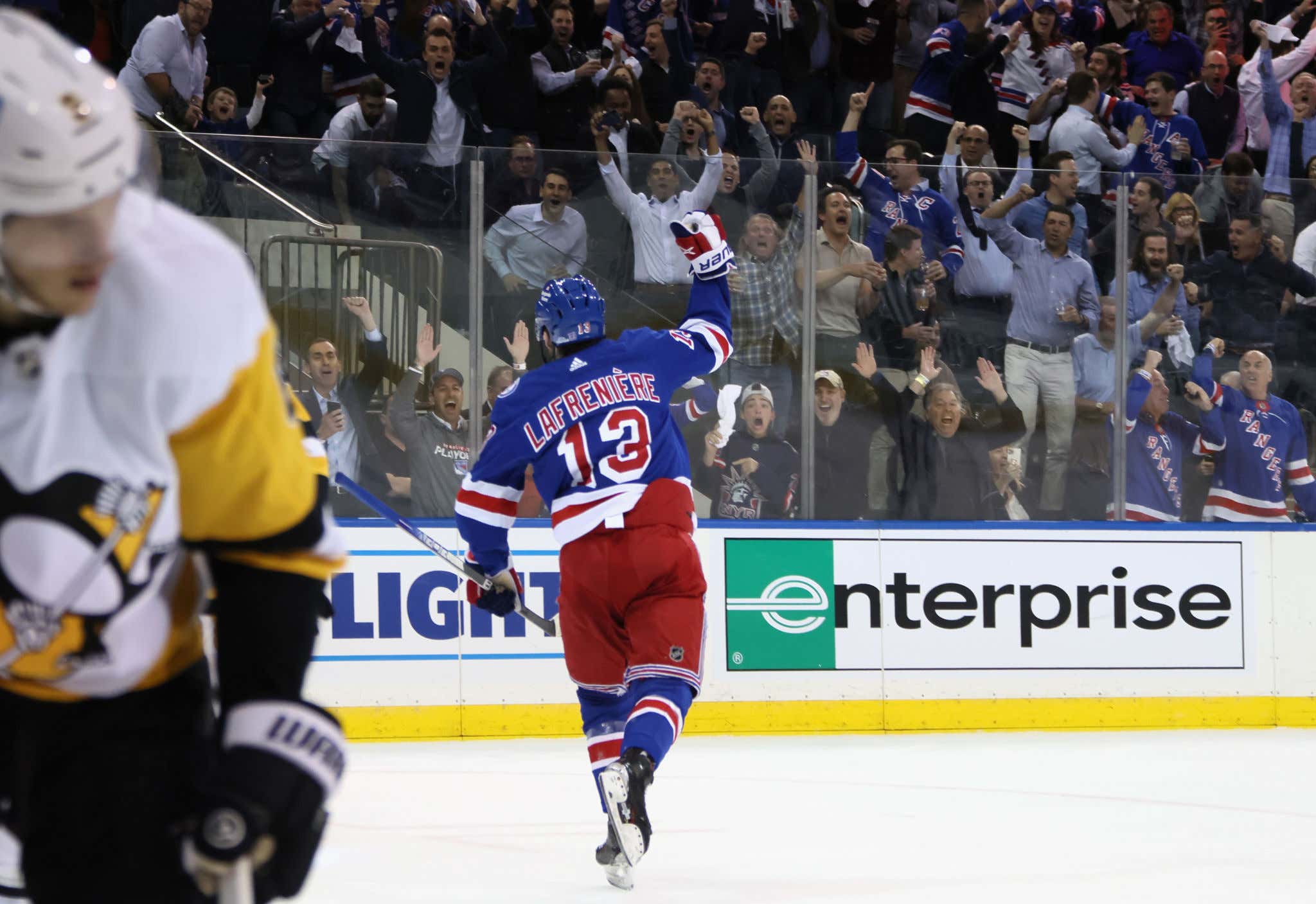 It didn't start pretty. Just 24 seconds in the Rangers took, not one, but two separate minors and handed the visiting Penguins a two-man advantage before even making a line change. The PK stood tall and the building was waiting to explode - but the Blueshirts didn't give them a reason. Lifeless. Trailing by a goal after 20 minutes, they still didn't have any hunger in their strides. Pittsburgh played on their toes yet seemingly at 75% without a concern in the world for the Rangers posing any sort of danger whatsoever. It looked bleek after Letang hammered home a one-timer for a two-goal lead.

And the fight back started so innocently. Just a little bit of work in the offensive zone resulted in a Fox wrister finding twine to put the good guys on the board. That's all it took for the avalanche. An incredible shift from the kid line resulted in a pretty pass from Kakko working behind the net that Lafreniere buried for his second of the 'yoffs, sending MSG into a frenzy. Then barely a minute later Trouba put his team on top. Flipped the game on its head in a mere three minutes.

Just THIRTEEN FUCKING SECONDS LATER Guentzel scored (what else is new) on a piss poor play with the puck from the ordinarily reliable Shesterkin and the contest went into the second intermission knotted at three. With Crosby headed to the locker room right before Pittsburgh's wheels fell off and not returning there was no way NY could lose the third period of an elimination home game to a Crosby-less squad anchored by Louie fucking Domingue. No way.

And the center of the Kid Line made sure of it, with Chytil cashing in the oh-so-rare Rangers second-unit PPG less than three minutes in. Kakko, Laf and Chytil have been THE bright spot so far this series and with absolutely everything on the line they stepped up yet again. Not Mika. Not Panarin. The Baby Blueshirts are the reason there's one more win ahead of them to set up an all-or-nothing Game 7 at the Garden. A Lindgren empty-netter (no one deserved it more - an absolute warrior in his return despite clearly being less than 100%) sealed it and, with question marks surrounding Sid's health, the Rangers all of a sudden have all the momentum in the world.

This game and the season was over more than halfway through. OVER. But the Blueshirts finally found some life thanks in large part to the energy and will of a 20, 21 & 22 year old trio showing they're capable of being "16 game players" for years to come. They're still gonna need Mika, Kreider & Co. to jump on the bus if they plan on a win streak, but the bus is only still moving because of the kids and that's a big, big deal.