Well, this certainly was interesting. I'm not sure what I expected the GM of a team that massively underachieved and has yet to even make the Finals during the Kyrie/KD era to say. Usually, these end of the season pressers are filled with some pretty standard and generic comments. And yet, I did not find that to be the case when it came to Sean Marks' presser today. Let's start with Kyrie.

On the surface, everything Sean Marks said in that clip is pretty standard and correct. Before the Nets can do anything in regards to Kyrie's future with the team, he has to make his choice as to what he's going to do 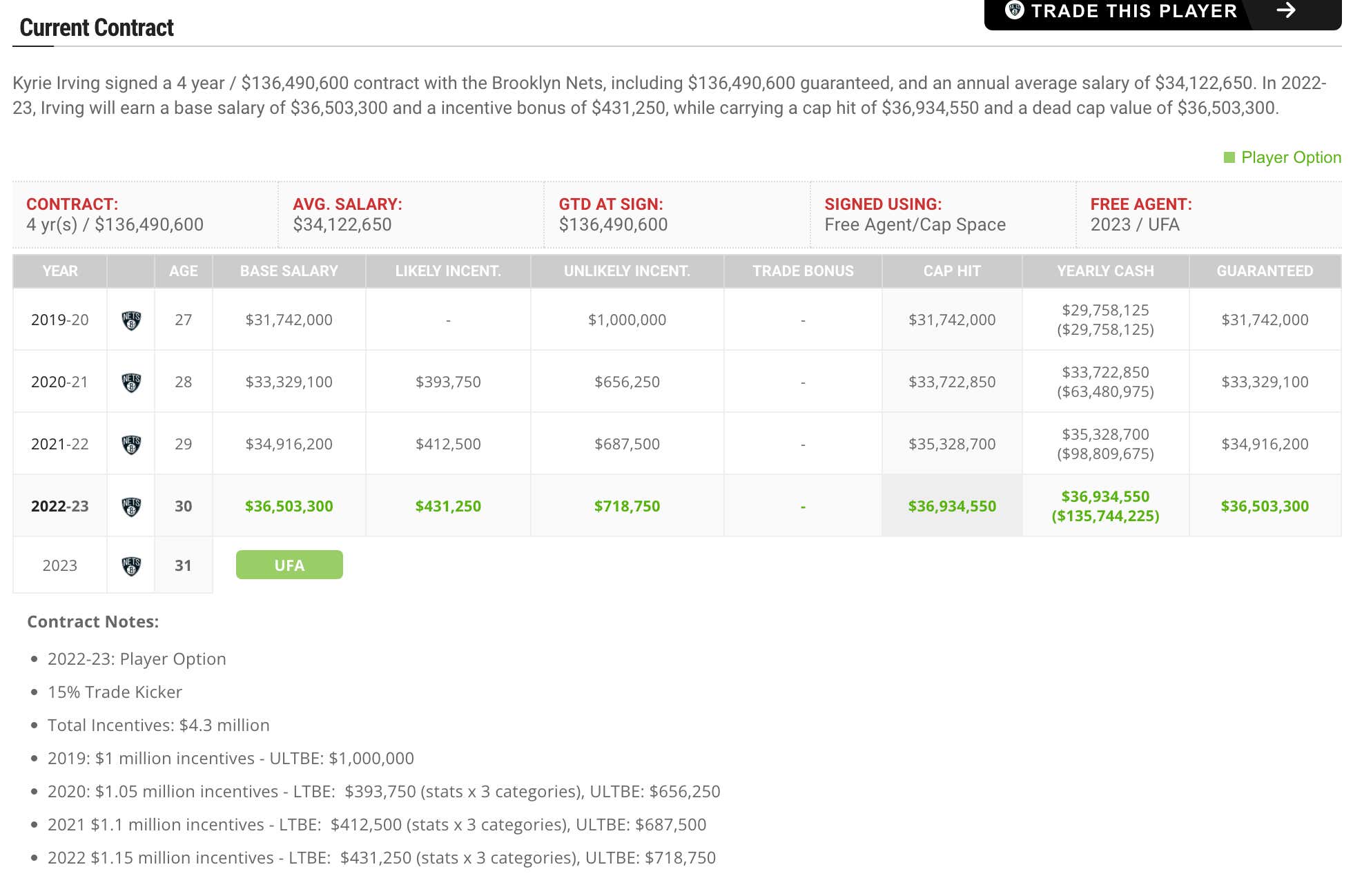 Normally in these situations, you would think the team has an idea of what the player is thinking. In most cases, they turn down that player option and then sign a max extension. We just saw Kevin Durant do it. He turned down his $42M player option for the 2022-23 season that was on his current deal, and then put pen to paper on this bad boy 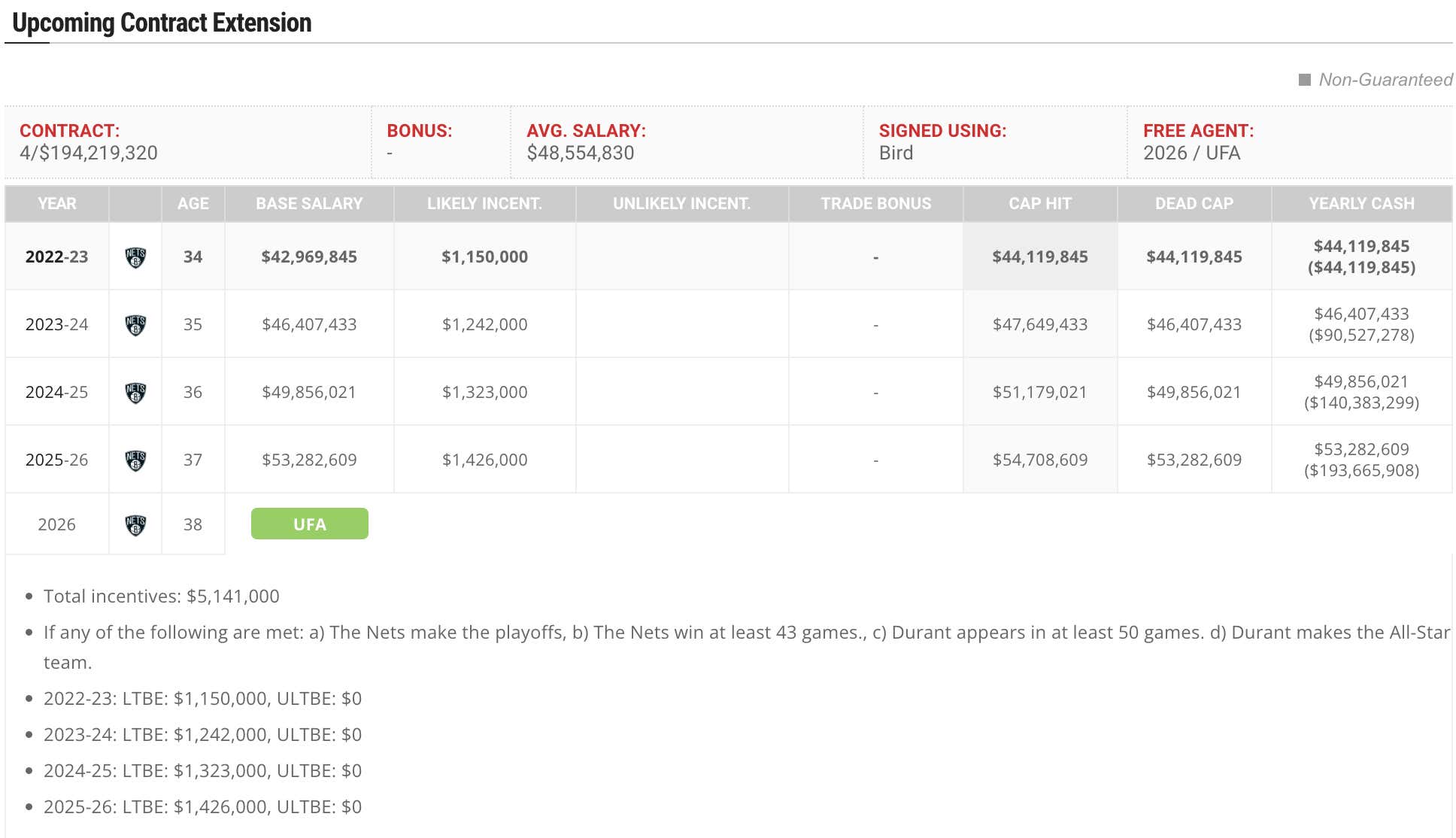 It's not an uncommon situation at all. For example, the Sixers are currently dealing with this exact thing when it comes to James Harden and his future. The Wizards are dealing with it when it comes to Bradley Beal. The Lakers have it with Westbrook. It's pretty standard. When it comes to Kyrie, things are obviously never easy or even cut and dry. Nobody ever knows what that guy is thinking on any given day. Does Sean Marks sound like a guy that is ready to hand over a max deal to Kyrie? As Kyrie looks at the landscape of the NBA, if he turns down that player option, which team is out there that is going to offer him big money/years on the open market after all the bullshit the Nets just had to deal with? If he picks up his option and then becomes a UFA after next season, do the Nets look to maybe move him if he's not in their long term plans? What about those rumors that he would just flat out retire if he got traded? Where does KD stand with all this?  As you can see, one of the biggest decisions this franchise has to make is filled with a ton of questions.

I thought it was also pretty interesting that he mentioned the culture. Before the Nets decided to go the super team route, they had a very young and hungry team that played hard every night and was actually fun to watch. They made the playoffs, had a bunch of young promising players, and looked to be on the rise. We know what happened next. Kyrie and KD came aboard, and they immediately decided to fire the coach and bring in Steve Nash only to then say they didn't even really need a coach, and ever since then they haven't been the same. What intrigues me about this is how they adapt moving forward. Does the culture change come from moving major pieces? Getting a new coach? Stop blindly doing whatever Kyrie/KD want? They say in the NBA that culture starts at the top, so it's an interesting dynamic.

It'll be fascinating to see what the Nets do this summer because it's clear that whatever path they are currently on isn't working. What makes that hard is nobody has any idea how Ben Simmons looks or fits into their team, and then you add in the uncertainty around Kyrie and I think it's fair to say that Sean Marks certainly has his work cut out for him. Teams in the East appear to be getting better and better with each season, so there's a chance the Nets aren't as close to the top of the mountain as they initially thought.

Oh yeah, and Kyrie has weighed in