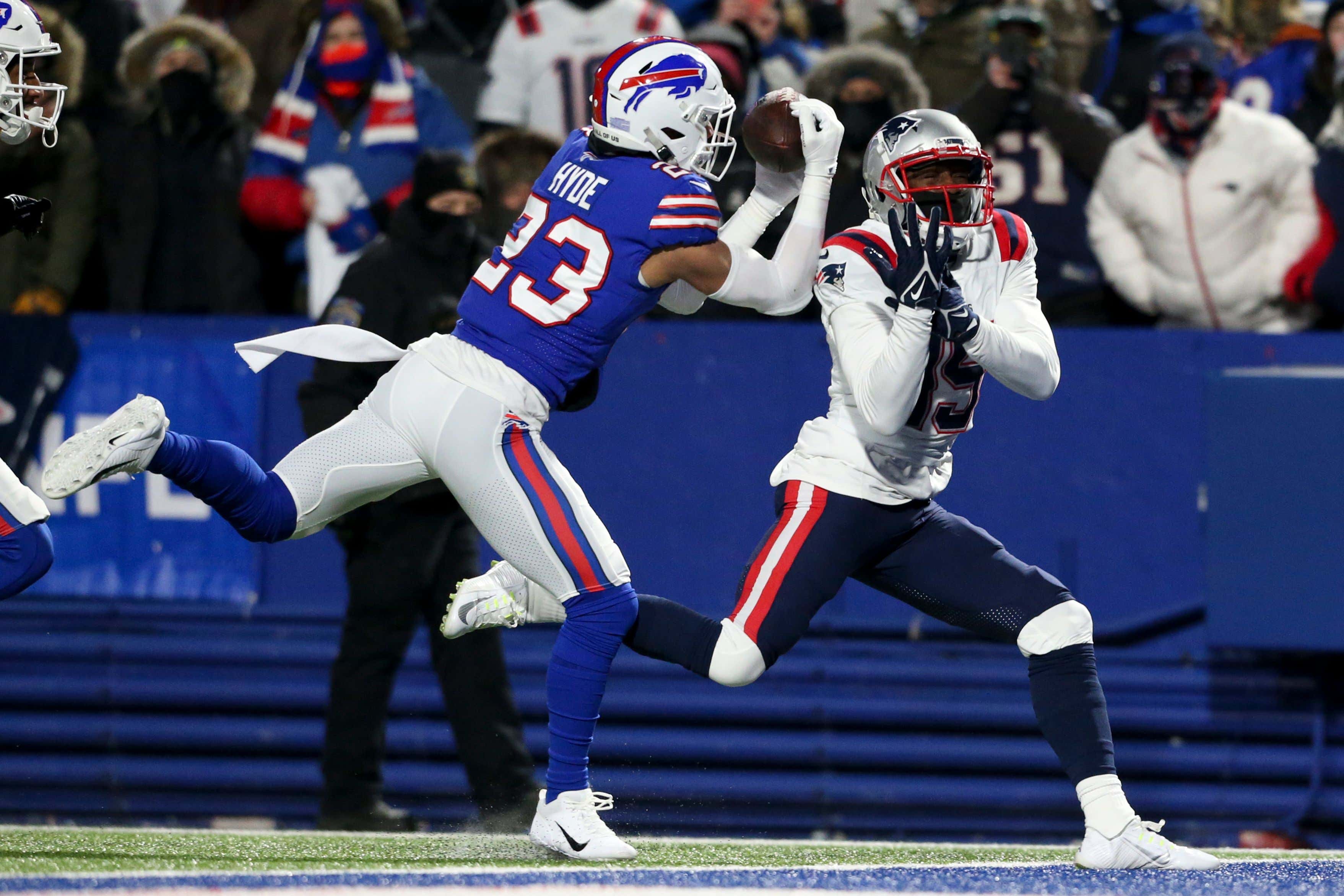 It's not telling tales out of school to say that Nelson Agholor's 2021 in New England started with a lot of promise when the Patriots signed him in the free agency legal tampering period, but failed to really blow anybody's nips off from there after.

After leading the league with 18.7 yards per catch for Las Vegas in 2020, Nelson's receiving yards fell by just about half year-to-year, from 896 to 473. And his receiving touchdowns fell to less than half, from eight to three. Despite being in a passing attack that came within 360 yards of the Raiders total and the fact he actually took 26 more snaps for the Pats than he did the year before. And it doesn't help at all that he has a cap hit of just under $14.9 million this year, the third highest on the team behind only Matthew Judon and Hunter Henry, both of whom played up to last year's hits.

And so it was that Agholor was asked about it today:

Source - “I don’t focus on that, you know?” Agholor said Tuesday during a video conference with the media. “I’m here for a reason and I love the opportunity that’s been given to me to be a Patriot, to work hard. The best part about it is Year 2 in the Patriots’ system is when guys really get going. I feel comfortable and I’m excited to have my best season with the Patriots and show why I’m here.” …

“[2021 is] behind us, but I would say that it went the way it was supposed to for me to grow,” Agholor reflected. “I can’t really look at it any other way. I needed to grow. I needed to adapt. I needed to be able to do what I wanted to do, and I think everything happens for a reason. I’m not going to get upset about this or that, because it’s in the past. What I do have in front of me is a really wonderful opportunity this year to be who I’m supposed to be and play the way I want to play.”

I'll say this: Agholor's lack of spectacular production commensurate with the amount of precious salary room he was afforded never seemed like it was for lack of trying. Like I said, he played a ton of downs. According to people I talked to in the facility, he (like all the other free agents) came in with a great attitude and worked hard. He ran more deep routes than anyone on the team, with 18 targets of 20+ air yards. But in an offense that was based primarily on the run and a quick, rhythm passing attack, he didn't appear to be a great system fit. His passer rating when targeted on deep balls was only 38.9, which was seventh lowest in the league. So there's that.

But still, you have to love the optimism. We don't know if Year 2 is when he'll "really get going" like he said. And if we're being honest, it's not actually true that it's how it happens around here.

Without getting all bogged down in the mud and swamp water of the numbers, it's hard to find a wide receiver who's come to New England, had a quiet Year 1 and then took a flamethrower to opposing defenses in Year 2. Despite playing more games in his second year, Danny Amendola had half the catches and 1/3 of the yards he did when he first game here and had his season cut short by injuries. Chris Hogan had just about the same amount of catches in 2017 he had in 2016, but his YPR went from a league-high 17.9 to 12.9. Randy Moss' best year in New England was his best. Wes Welker put up the same  unbelievable numbers all the time. It took Julian Edelman a good five seasons to become Julian Edelman. Brandon Lloyd, Brandin Cooks and Malcolm Mitchell all only lasted one season in Foxboro for different reasons. And of course N'Keal Harry hasn't shown any improvement and likely won't if he plays here until the sun goes nova.

Still, it's a good thought. And I'm a big believer in never letting reality get in the way of good thoughts.

And it is by no means out of the realm that Agholor will contribute more next year than last. Yes, he should lose significant playing time to Davante Parker. But Parker is also a capable deep threat and a quality route runner who should draw coverage and create room for Agholor to operate. And with an official 4.28 40-time, Tyquan Thornton is quite probably the fastest receiver to ever suit up for this franchise. Which means more 3- and 4-vertical concepts instead of simply sending Agholor out by himself to Lone Wolf it against one or even two deep safeties. Even if the added receptions, yards and TDs don't actually end up going to him but to the other wideouts (and Henry and Jonnu Smith, who positively needs to turn up in his second season after turning invisible last year), that's fine too. Just as long as they go to somebody.

So I appreciate the spirit Agholor is showing here. It is possible that he'll be more comfortable with the scheme, know his role better, have more help, and find the chemistry with Mac Jones he was lacking before. Even though history is not exactly on his side, we can at least hope he's right.