With all the talk of Reddit burners & secret Twitters this week I've had to go back through the Rolodex mess of my mind & take my own social media accounts into... account. 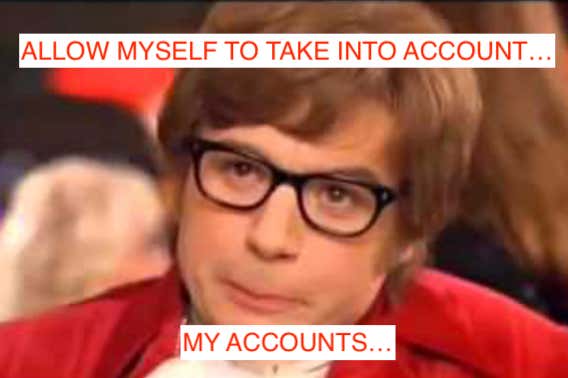 Turns out I do have a few burners and on every platform, but instead of incriminating me with anything nefarious they just confirm that something is probably wrong with my brain. Especially my Reddit burner…

Chaps blogged about it to roast me this morning, but it truly is cringe. This was pre-Barstool in my personal 'dark ages' following my divorce, and though I only posted a few times I was sure to be as doom & gloom as possible when I did…

Worth noting, that 'degree from a top school' was Fordham. And 'a career' was a couple years at Comedy Central in the lowest paying job in the production department, and I sucked at that job & probably would have gotten fired soon anyway.

Friends & family kept telling me the only healer for heartbreak is time, and turns out that is the truth, but the bummer is that in the moment nothing can convince you of that… So there you are at 1am sipping cheap rum, scrolling around on r/Divorce practically begging internet strangers to feed you a magical, personal nugget of wisdom that will give you an 'aha!' moment to get you through it… An anecdote or quote or factoid that will act as a salve for another night of ~agony~. (Yes, I am rolling my eyes at myself as I type this & re-live it.) I'd find other people who appeared to be hurting as much as me & offer them nothing but "same here, oh my God it's terrible". Very helpful!

On the plus side, I've never used that account for anything else, and once I moved on (there's hope if you're going through it!) I totally forgot I even had that account until all the scuttlebutt this week. Very fun to hop in the time machine & remember that I'm an annoying dork.

In 2020 I made up an account for a beer-league softball team run by a biker bar in Terre Haute, Indiana, and I know I did it specifically for a joke in a blog. For the life of me, though, I cannot remember what blog it was, or why, or what the joke was. Tried looking through my old posts, typing in keywords, the main site, google, nothing… zero clue. But when I toggle between my personal Insta, my cat's Insta (sick flex) & the ZBT insta, there it is underneath… Muddsbar… collecting dust. I believe it has a whopping 8 followers, and none of the posts that I made with it make ANY sense to me now. First one to find that blog of mine & DM the link to me, I'll Venmo ya $25.

Even before my world's-most depressing-Reddit account, there was Hard4Motivation AKA Inspiration Station - a good vibes burner! I made this account all the way back in 2016 and I think the idea was to sort of poke fun at all the inspirational quotes you see attributed to celebs when half the time it's stuff they never said… but I missed the mark big time and it was just bizarre instead of funny. In fact, looking at the posts now makes me wonder how the hell they ever let me wind up here at Barstool.

The only reason it even has any followers is that I brought it up on the Chaps & Kate Show once & people followed just for laughs. Then a few years later I began using it to post videos of my cat during COVID times so that my main account wouldn't get dinged for using copyrighted music.

Very cool & exciting info all around.