I'm admittedly not a big college football guy, but now that a good chunk of the studs on the 2021 Georgia Bulldogs D has been drafted to new NFL teams, the security as this random Best Buy has taken their place as the best defense in the nation.

Now I know the critics will say that the offense was sloppy with their rip and run strategy considering the ripping took multiple attempts. However, Big Blue sprung into action so quickly, I truly don't think it would make a difference. Look at the tape: 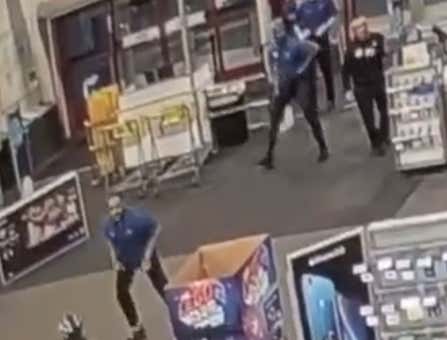 Not only was that elite athleticism with slides on par with Prime Time Era Deion Sanders. But the stances and the defensive formation were absolutely textbook thanks to not only practicing but practicing perfect along with A+ coaching from the Geek Squad. Let this be a warning to anybody looking to steal a phone, their best bet would be hitting Circuit City because the Best Buy Brick Wall isn't going anywhere (Circuit City may be out of business, I'm not sure. But the point still stands).