I'm full aware that what I'm about to say is going to make me sound like an Old. But I'm a product of a world where our celebrities who were famous for being pretty didn't post a half dozen photos of themselves in a hand bra with a cartoon heart over their bathing suit area, all identical save for slight variations in the filter. So even though these are not Britney Spears first voluntary nudez:

... this takes some getting used to for a man of my generation.

Of course, not that we would've minded if our celebrities did this on the regular back in the day. But it simply wasn't done. In my formative years, if you wanted to see the suggestion of celebrity nudity, you had to settle for Farrah Fawcett's nipples poking through her one-piece bathing suit on a poster. Christie Brinkley on an SI Swimsuit Issue cover. Kathy Ireland's cleavage on a St. Patrick's Day beer ad. Rent Fast Times at Ridgemont High on VHS from the local Blockbuster and hope the part where Phoebe Cates comes out of the pool isn't too worn out from all the other pervs rewinding the tape and watching it over and over again. And in extreme cases, hope whatever celebrity layout there is in Playboy isn't too tame or airbrushed beyond all recognition. (Thanks always for stepping up to the plate, Mimi Rogers!)

So this brave new world where former Disney Channel stars who have grown up before your eyes give it away on their socials is something that is hard to adjust to. Even after all this time. Even though Britney Spears herself is a grown woman of 40 years of age and a mother. Emancipated by court order and free to make her own life choices. It's still takes some getting used to for someone who grew up in a time where this was unthinkable. I mean yes, Madonna did, in fact, show her funny business. But did so in a book with a sheet metal cover that cost 50 bucks. And you had to know someone willing to shell out that kind of money for a softcore porn mag filled with artsy black-and-white photos in order to even get a glimpse of them.

Britney is giving hers away. With weird, unnerving captions about having a baby inside her and loving us all. Repeatedly.

Again, she's a grown ass woman. This is still America. (Ish.) If she feels like grabbing the twins and slapping a symbol of romantic love over her prison wallet in an expression of joy and motherly love, it's not my place to stand in her way. I don't think it's a greatest endorsement for putting your kids into showbusiness at a young age. But that's just me. There are people who will see this as a confident statement of sex-positivity and female empowerment, and say it's not the place for any of the rest of us to judge.

But then again, I'm not alone in being concerned for Britney's well-being in all this.

Irish Mirror - While some fans praised her openness, others begged for her to refrain from continuing to post such images.

"This is public. Do you want your son’s friends seeing this type of thing? You are better than this."

A third penned: "What are you doing stop it," and a fourth added: "Oh no Britney don’t do this things." …

Comments were a mixed bag again, with over 300,000 fans liking the snap, including her fiance Sam Asghari.

While many fans posted their love for the star, others again asked her to stop with the nudeness.

One follower simply wrote: "Please stop," while another joked: "Oops she did it again."

A third questioned whether she was doing okay, writing: "We all love Britney but we are very concern[sic]." 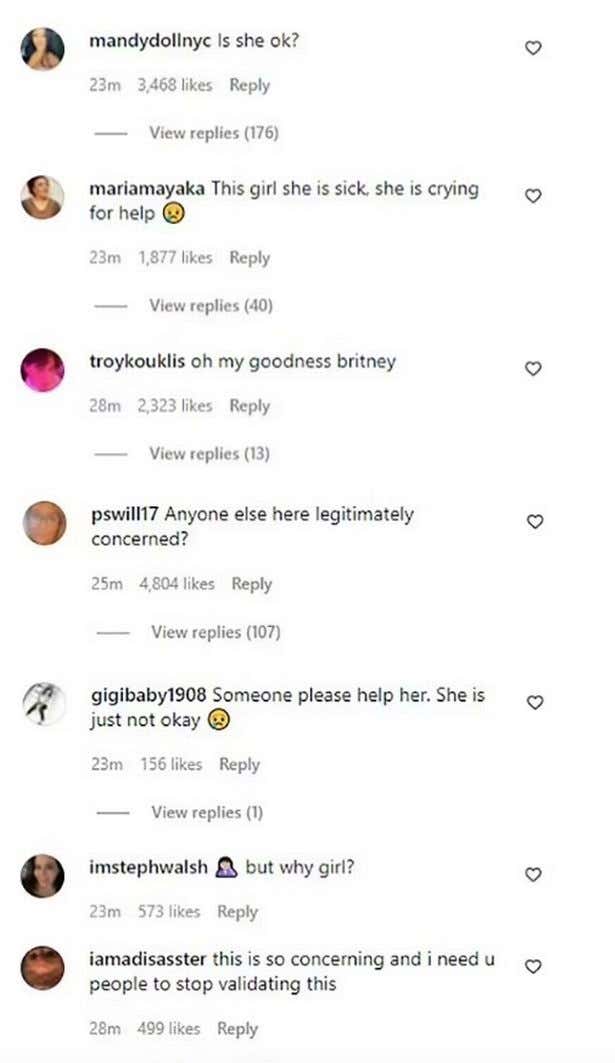 The bottom line I guess is that one woman's free expression of her independence is another woman's desperate cry for help. That something her fiance is perfectly OK with, is a sign of crippling mental health issues to her fans. And what to some should be celebrated as a display of feminine confidence and body positivity, is to others a sign of our culture's moral decline. (I can't even imagine how something like this goes over in most of the other countries of the world. They must look at us like we're Sodom & Gomorrah.) While personally, I just shrug with my palms facing the ceiling and think, "Our pop stars get naked for free now." And try to keep up while the collapse of civilization stays way ahead of schedule.