Okay so first and foremost--do I love that call? Not at all. Pretty tough one to call in the 3rd period of a playoff game. I guess by the word of the law, Klingberg used his stick in a "manner that enables a player to restrain an opponent" and since he got Gaudreau up in the gloves, it wasn't just stick-to-stick contact. So if you want to call every play by the exact definition in the book, that was a hook. Tough call to make but at the end of the day, if Klingberg doesn't want to get hit with a hook call in that spot then maybe he should just get faster.

Either way, the call on the ice was made. And Johnny Gaudreau probably knew it was a weak call. So in order to make things even, he decided to go back to the same exact move he was about to pull in the first place. No need to surprise Oettinger with anything different here. Give him something that he already got a look at just 30 seconds prior. Seems pretty fair and sportsmanlike to me. So what happens when Johnny Gaudreau goes back to the same forehand-backhand he likely would have scored on in the first place?

Death. Taxes. Johnny Hockey going leg kick, forehand, backhand, and tucking it 5-hole when the goalie's legs spread for just a split second. All things in life that are simply inevitable which we must come to accept. He's like Neo in The Matrix slowing the world around him into bullet time. The moment a goalie's 5-hole opens for half a second, it might as well be half an hour for Ham & Cheese.

By the way, the hockey world needs a deep playoff run for Calgary here. The longer the Flames stick around, the more Tkachuk Family Cam we get to enjoy.

Also maybe a few more playoff wins and we can get Darryl Sutter to say a full sentence to the boys post game. 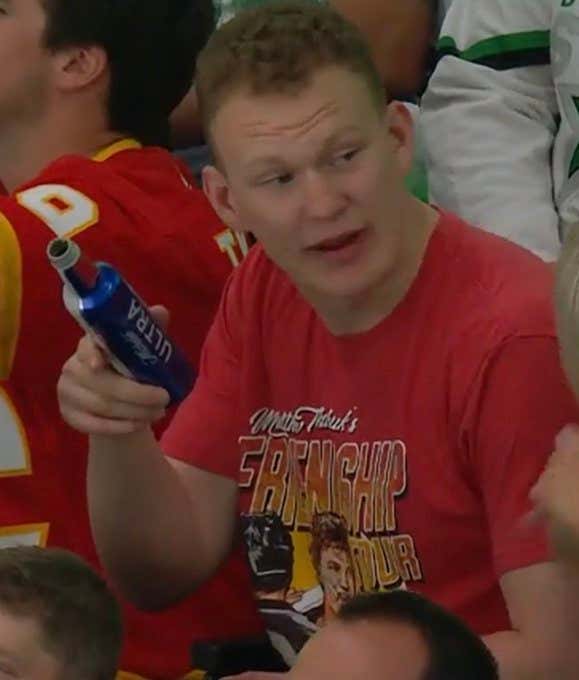