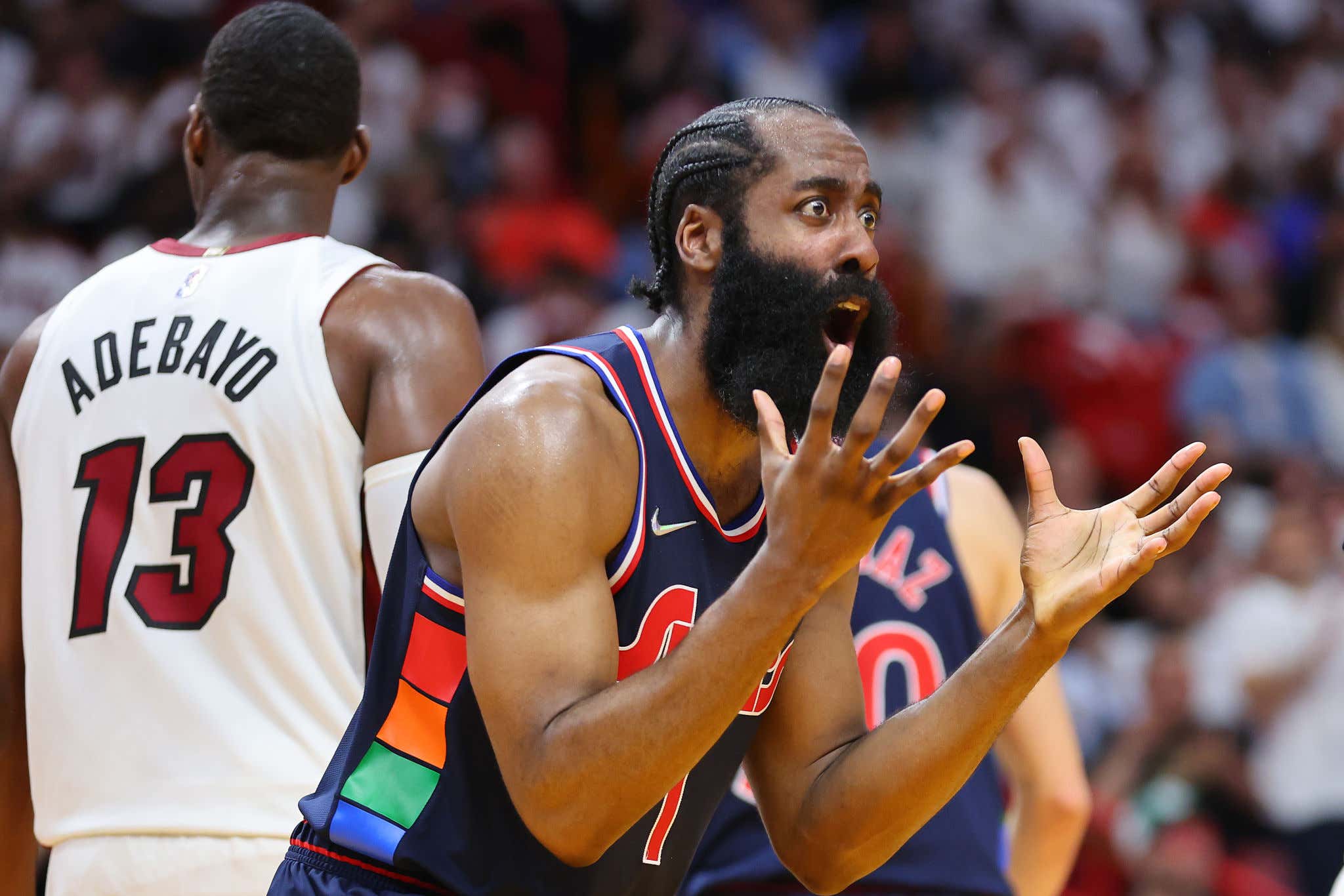 Can we just talk about how bullshit it was that there was no playoff basketball last night? Sure you could have done things like watching other sports such as baseball or playoff hockey but who gives a shit about any of that stuff. You can't give me nonstop basketball and then randomly take it all away for a night. Not when there are some teams that have like 15 days in between games. Man, that was brutal to get through.

Good news is we're back tonight baby. Bad news is there are a few teams and fanbases who woke up this morning with their 2021-22 NBA season on life support. We get back into the action tonight with two separate 2-0 series as those matchups head out to the lower seeds home court in what I would describe as two must win games. As I'm sure you are well aware by now, only 31 teams in NBA history have clawed back from an 0-2 hole to win the series. That would make the 2-0 team a cool 408-31 (92.9%). When you start talking about a series that takes place in the second round, 2-0 teams are 106-6 (94.6%) which even though I'm in no way a math guy, seems pretty good.

As they say, a series doesn't really start until someone loses on their home floor. That's what I would be telling myself if my team was returning home down 0-2. Just protect your home floor and you have nothing to worry about. As we'll see, that might not be as easy as it sounds.

First things first. Given what we know this second, here's what the health status of everyone looks like heading into this massive Game 3

It really sucks that Siakam hit Embiid with that elbow, and I don't even give a shit about the Sixers. I just love watching the best of the best battle each other over the course of 48 minutes. Embiid being knocked out of this series obviously changes everything about it, and from what you read it seems like Embiid is still dealing with his concussion symptoms. That sounds miserable. I've always felt that as soon as he cleared concussion protocol he would do whatever he could to play in terms of wearing a mask for his orbital bone, so it sucks that for such a huge game the Sixers still won't have their best player.

The interesting injury news is that Kyle Lowry update. He hasn't played at all this series either, and while you never want to rush any sort of hamstring injury, getting a player of his caliber back for tonight would be a pretty big deal. There's a pretty big difference in dealing with Gabe Vincent (8.5/3/3 on 38/19%) and a player like Lowry, so that should have Heat fans feeling great if he ends up lacing them up.

Outside of the injury shit though, this series and really the Sixers playoff lives come down to a few things. First, will James Harden actually play like an NBA caliber player? With no Embiid, Harden has to be THE GUY for this team to have a chance. Putting up 18/6.5/7 on 39/24% splits is nowhere close to filling that role. Shit, he's only averaging 18.8 points a game on 40/34% these entire playoffs, which is basically the worst playoff production he's had since 2011-12 when he was still coming off the bench in OKC.

It's not just Harden though. It's very clear that the Sixers without Embiid have absolutely no chance against Bam. That's just the reality of any team that comes at the Heat with a shitty frontcourt. Bam eats that shit alive

So far in this series Bam is putting up 23.5/10.5/3.5/1.5 with an 80% TS%. That would obviously be different if Embiid were active, but without him there is simply no answer. I'm not even sure what Doc does other than trot his guys out there and pray. It's not like you can just go small and hope to run Bam off the floor like you might for other bigs, so maybe just try and double and hope he panics? The downside there is you're leaving a great shooting MIA team open for clean looks if you do that, which probably isn't the best idea.

You also have to hope that the Sixers role players will be much better in their own building. The bench points were a disaster in Game 2 with the Heat dominating that 52-19. If you do that shit again tonight, your season is over. Georges Niang is averaging just 2.5 points on 25/16% shooting in this series. Shake Milton just 3.0 points on 16/0% shooting. Furkan Korkmaz has really been their only sign of life on that second unit, but there's also all the defensive issues you have to deal with when he's on the floor.

What makes the Heat so tough is when they know they have you in a pickle, they can turn up the heat (no pun intended but intended), especially defensively. That zone is no joke and they are just daring the Sixers to actually make enough shots to win. The Sixers are dead last in 3PM this series (7.0) and dead last in 3P% (21.9%). You would think a little home cooking would improve those numbers, and if they don't then this thing is a wrap. They have no problem blitzing and sending multiple bodies at Harden since there's no Embiid and they'll live with the Matisse Thybulle's of the world trying to consistently make jumpers.

Much like that series above, this Western Conference matchup has been pretty one sided to start. That's not exactly surprising since the Suns are devastating, but if the Mavs want to keep their season alive it's pretty obvious what they need to have happen as well.

For starters, the home cooking needs to help Jalen Brunson actually find a way to show up

Brunson is such a big part of the Mavs offense and what makes them successful, so him only averaging 11 points on 31/16% splits is a massive deal. He's learning first hand there is a BIG TIME difference between the Suns perimeter defenders compared to what he dominated going up against with the Jazz

The Mavs are going to have to find ways to make some adjustments to get Brunson going because without his production and the reality of Spencer Dinwiddie only shooting 33.8% from the floor, someone in this backcourt needs to help Luka. He can only do so much and from a production standpoint has been more than enough. This is about the "others" on the Mavs finding a way to be effective against this elite Suns defense, which isn't exactly easy.

Another big issue the Mavs are going to have to figure out tonight is what the hell are they going to do when the Suns repeatedly attack Luka defensively. For as awesome as he is on the offensive end, I don't think anyone would describe Luka as a two way monster. They hunted him ALL QUARTER in their huge Game 2 win, and that is not going to change anytime soon

Once Chris Paul knows you have a weakness, the only thing he cares about is then exploiting that weakness to his benefit. It may sound unfair that Luka has to carry such a heavy offensive load and then also ask him to show up on defense, but that's what the elites in the league do. There are star players that show up on both ends at a high level despite a heavy offensive load. It's on Luka to step up and not be such a massive negative on that end. If he doesn't, their season is a wrap.

At the same time, this is not just a Luka problem. For a Mavs defense that had been elite since we got to 2022, they are providing zero resistance against this Suns offense. The Suns are shooting like 60% as a team in this series which is flat out insane. They have a 132 Ortg. At some point the Mavs are actually going to have to force the Suns to miss. That was something that didn't seem to be a problem over the last 40+ games, but suddenly in this series they can't seem to get a stop to save their lives, even outside of the Luka issues. Stop giving up 120+ points and you give yourself a chance, it's really that simple. But if this high powered offense isn't going to get much from their secondary scorers on one end, and then not get any sort of consistent stops on the other, the Suns are going to make quick work of this series and get some rest before the WCF.

As we know, no team has ever blown a 3-0 series lead, so you could make the case that both of these series come down to tonight. That's the type of playoff pressure I love watching as a guy with zero rooting interest in either game. I just want some crazy moments, high pressure situations, and for everyone to stay completely healthy. Making it through last night with no basketball was tough, but it feels great to be back. Let's have ourselves a night.