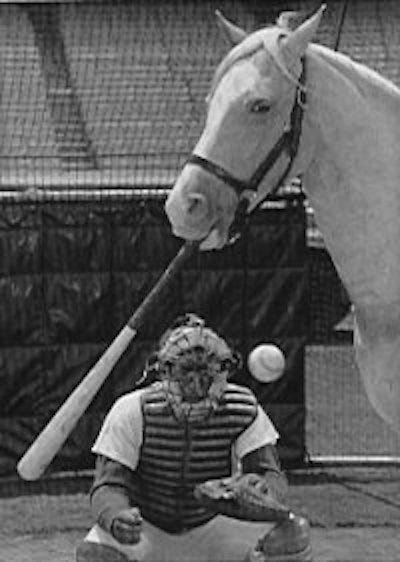 Blogger's Note: I wrote this back in 2018 but had a few people bring it up recently so I decided to republish it in honor of the Triple Crown kicking off today. I still can't believe I wrote this much about something this preposterous, especially since my brain has been reduced to mush after the last two years. Anyway here's the blog for whoever wants to read the thoughts of a madman

Last night I woke up in the middle of a good old fashioned night terror. Having a few Tootsie Rolls while playing a couple of rounds of Call of Duty after 11 PM may not be the best combination for a person that has nightmares regularly. But when you want either of those things, you WANT them.

Anyway, once I awoke, realized my house wasn't under attack and there wasn't a gun next to my bed that could protect my family, I did what anybody these days would do. Check Twitter. And one of the tweets I saw was the question above straight out of a KFC Radio voicemail, which gave me a chuckle before heading back into dreamland.

When I checked Twitter this morning, it was gone. Vanished like a fart in the wind. Or my fucked up brain created this question in between terrifying dreams. I'm not sure. But since this question has made me laugh and think harder than anything else in months, I figured I would devote a blog to it.

The Case For The Horse:

Many people will say that the horse is going to have a problem hitting because swinging a bat that is in your mouth is no easy task and would likely effect the horse's ability to hit for average and power, which are 2/3 of the triple crown. But the people that say all of this stuff have likely never watched an Air Bud movie and realized that where there's a will, there's a way. Baseball is all about confidence and literally being hung like a horse will have our equine friend oozing machismo.

Also in the horse's favor is how he shrinks the strike zone.

According to rule 2.00 of the Major League Baseball rule book, a strike zone is defined as "that area over home plate the upper limit of which is a horizontal line at the midpoint between the top of the shoulders and the top of the uniform pants, and the lower level is a line at the hollow beneath the kneecap" and is determined by "the batter's stance as the batter is prepared to swing at a pitched ball."

Now using that lets see what that strike zone looks like when a horse is at the dish.

Look at that strike zone disappear! If you aren't throwing that horse a big, fat meatball, you are throwing it a ball. You know what happens when you throw a batter that has horse testosterone pumping through his veins a meatball? That meatball lands on the moon. If the horse batter lays off of the shitty pitches, he is going to first base and about to cause CHAOS on the base paths. I mean literal chaos. You thought Chase Utley going out of his way to end Ruben Tejada's career in the 2015 playoffs was bad? That ain't nothing to witnessing a thoroughbred breaking up a double play. And good luck to the sorry ass catcher that has to try to throw out a horse that can close a 90 foot distance in like 3 strides.

If the pitcher wants to avoid that mess, he better throw strikes. And if he throws strikes, there's a chance the horse goes YABO every time out. I am pretty much picturing Barry Bonds' 2004 MVP season where he hit 45 home runs and led the league with a .362 batting average while also racking up a league leading 232 (!!!!!!!!!) walks for a cool .609 OBP. Bonds "only" had 101 RBI that season because he only had so many chances to put the ball in play and RBI is also a product of having teammates on base, which is completely out of the batter's hands.

And to anyone who says that horses couldn't hit a hardball, please explain this old video of Mr. Ed tattooing the GOAT Sandy Koufax's pitch during Koufax's prime and galloping to an inside the park home run, which by the way would count for a home run in the Triple Crown standings.

Holy shit that was the greatest video I've ever seen. Mr. Ed broke out of the batters box quicker than Peak Ichiro. I guess defense could be a problem for any horse, but you can fix that by plugging the horse in as DH. Mike Francesa says that Secretariat was the mawst stunning hawse he's evuh seen. Can you imagine what Mike would have thought of Secretariat if Secretariat could show off all five of his tools instead of just his speed? First ballot Hall of Famer.

Meanwhile, a human would have to win The Kentucky Derby, The Preakness, and the Belmont Stakes, which range from 1 3/16 miles long to 1 1/2 miles long. The winner of this year's Belmont, the longest race of the three, finished in 2 minutes and 30 seconds. The world record for humans running just ONE mile is 3 minutes and 43 seconds. No human is closing in on a 2:30 mile and a half in any of our lifetimes. Even Usain Bolt would get dusted by your run of the mill race horse.

Also a human would have to let the horses get a head start in every race or risk getting absolutely BODIED right out of the gate like this guy.

And my last point for the horse is I feel like if the horse has to wear a helmet and uniform like a baseball player, a human racer would have to let a horse or at least a pony, ride him as a jockey. Or even just a regular jockey. No human on the planet is going to even finish a race, let alone win one with those stipulations.

The Case For The Human:

There are only three Triple Crown horse races for the human to win as opposed to the 502 at bats that need to be registered in a gruuuuuuuueling 162 game season in order to be eligible for the baseball Triple Crown. I don't know if horses always have to travel by land, but driving in those car stables to 81 road games all over this great country would wear that horse out quickly. Meanwhile, a human just has to hope for a 10+ horse pile up every time out in his races to avoid getting trampled to death and he can coast to victory. There have been 13 Triple Crown winners in horse racing, there have been 16 Triple Crown winners in Major League Baseball. While this seems like it's harder to do in horse racing, there have also been 8 zillion baseball players with a chance to win a Triple Crown, while only a fraction of horses have had the chance to pull it off.

Oh yeah and the fact he (or she) is a FUCKING HORSE that has no idea about baseball, stats, or the voodoo that is a Major League breaking pitch seems like a pretty big strike against Team Horse.

If only there was some mythical half man, half horse creature that could do both of these things…

Final Verdict: Horse winning the baseball Triple Crown just because it's a billion times funnier to think about. Holy shit, did I really just spend two hours blogging about this? That's not as funny. The only way to make myself feel better is to end this blog with some classic Man vs. Beast videos from a show I need to come back and I needed it yesterday.

Along with this throwback gem