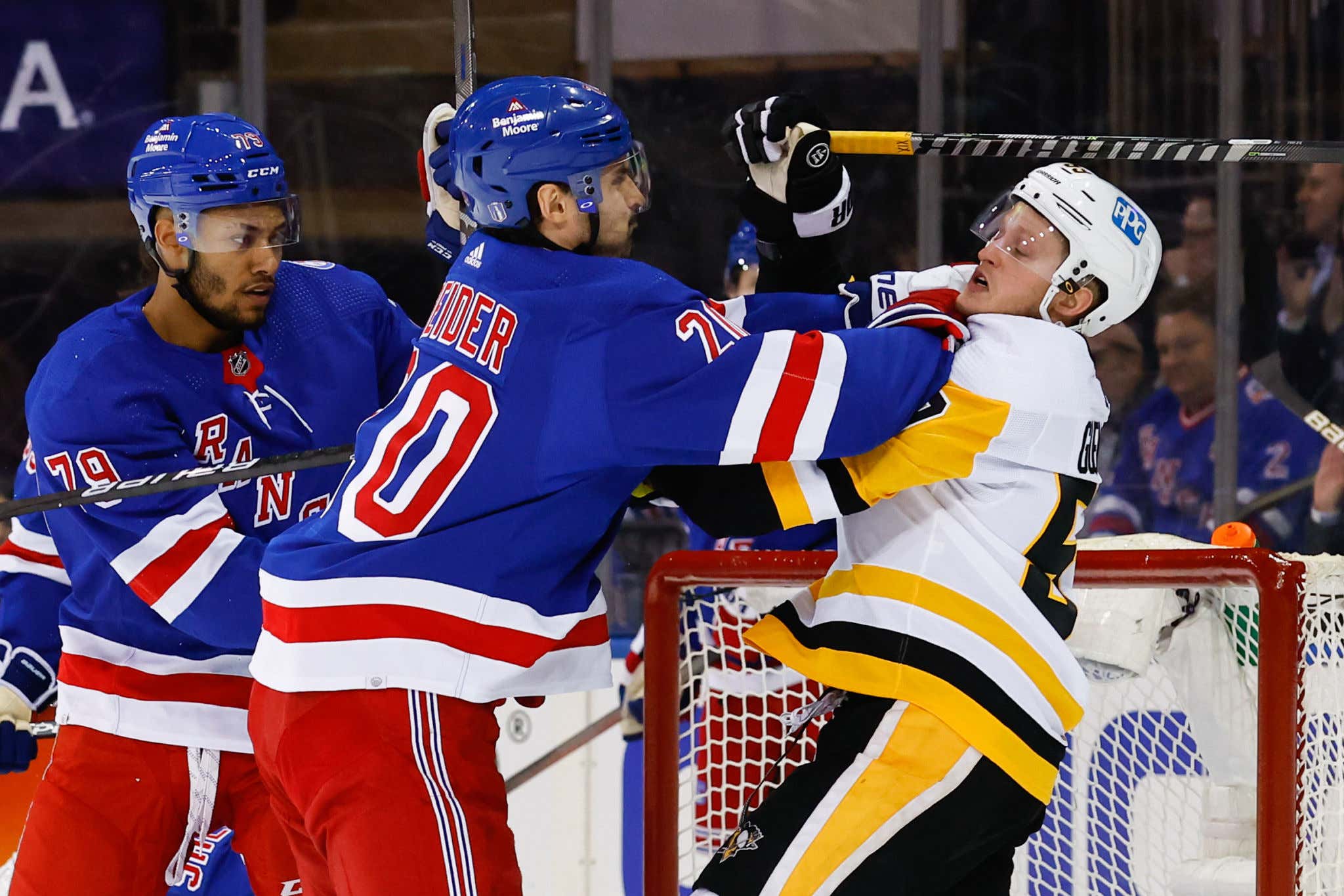 Forget Game 1. It's over. All the Blueshirts should be focusing on is tonight being all but certain must-win contest with the next two scheduled in Pittsburgh. The Rangers have been an excellent counter-punching team all season long. Always responded well to losses. Coming off a tough one, it's time to throw a shot of their own and even up the series. With the Penguins short a body in their top six (although Zucker may return) and down to their spicy pork & broccoli eating third-string goalie, Gallant's squad is in prime position to do exactly that.

There's a few in blue who I'll be expecting to put forth much better efforts. At least cleaner, more responsible ones. I dunno what the numbers were but it felt like Panarin, Copp & Kreider were giving the puck away every other time they had it Tuesday night. Panarin is most concerning because he left the Carolina game early last week then missed the last two regular season games. I'd much rather know it was just an off-night rather than an injury that's gonna linger for the former Hart nominee. And yeah it's hard to come down on two of the goal-scorers, but there were multiple "what the fuck are you doooooooingggggggg" instances outta Copp & Kreids in the offensive zone. Passes to no one in particular that zapped any chance at sustained pressure and let the Pens push the other way. They simply gotta clean it up if they plan on playing longer than another week.

They also need Ryan Lindgren to be healthy enough to stand. Being on and off the bench repeatedly throughout Game 1 forced Gallant's hand to rely on Fox, Trouba and Miller for 42+ minutes each. Obviously not all games are going to triple overtime but you can see during crunch time he'd rather not use Schneider or Nemeth as much as possible - and not to blame the duo entirely, but the game-winner started with Braden's inability to effectively move the puck in the defensive zone. Then the team went into scramble mode before Nemeth coasted out to no-man's land, leaving Malkin alone atop the crease for the deflection. There's no avoiding playing your third pair. If Lindgren can't go though, the thought of anyone else having to gobble up top-4 minutes is scary.

Most of all, the Rangers have to figure out how to contain the Pens top line. When the Crosby trio wasn't on the ice at 5x5 the scoring chances were even. When they were, they out-chanced whoever tried to defend them to the tune of 30-2. THIRTY to TWO. There's no doubt Crosby is one of the all-time greats and his chemistry with Guentzel is undeniable. There should be plenty of times when they're the best on the ice - but it can't be every single time. Can't lose games to a one-line squad I don't care how good they are & I anticipate Mika's line doing a much better job containing them like they did throughout the regular season. Crosby & Co. won't own another game like the opener and that'll be the ultimate key to victory.

Don't believe me? I'm a homer? Then don't take it from me, take it from B's fan & producer of the greatest hockey podcast on the globe. This series is headed to the Steel City knotted at one a piece and that's just a fact.

No chance the Rangers lose at home again tonight