Daily Mail - The infamous Kim Kardashian sex tape was 'released like an album' by Kim herself who kept the only copy of it stashed in a Nike shoebox under her bed along with the rest of the steamy tapes she made with Ray J, DailyMail.com has learned.

Speaking for the first time about the tape in a bombshell interview with DailyMail.com, Ray J said he had never possessed a copy of any of the tapes they made together, only holding on to photos and texts Kim sent him between 2002 and 2009.

Everything about this family of skanks is fabricated. Every. Single. Thing. Including this clip.

And if it's not then shame on them.

Kim ran Kanye through the fucking ringer the past year, yet she still lets him go and clean up her mess, which turns out SHE CONCOCTED AND WAS BEHIND THIS ENTIRE TIME along with her evil mother Kris Jung Un.

Ray J, who said he hasn't spoken up until now because of a contractual agreement, claims there are multiple sex tapes he and Kim recorded when they were dating in 2002, but says he has never had them in his possession. In 2007, one of the tapes was released for public consumption as Kim Kardashian, Superstar after being sold to pornography distributor Vivid Entertainment. The 2016 novel, Kardashian Dynasty, written by Ian Halperin, alleges Kris Jenner deliberately leaked the tape to Vivid in a plot to gain fame for Kim. Following a lawsuit, the video was cleared for release after Kim and Ray J signed off on it.

Ray J confirmed this, saying the sex tape was released like an album. "Once I pitched the idea to her, just playing around a little bit, that's when she jumped on the idea, talked to her mom and it was out of my hands from there," he added.

The Raycom earbuds creator said he is coming out now after being angered over a recent episode of The Kardashians, where Kanye West brings Kim a laptop that allegedly contained the remaining footage of the sex tape. In the video, Kim claims Ye met with Ray J at the airport and got the tape. Ray J claims this is all a farce to add drama to the show. He admits to turning over a laptop to Kanye that only contained non-sexual photos of Ray J and Kim and speaking man-to-man with Kanye for hours.

"I mean all of this is all a lie," Ray J said. "From the beginning of us putting this sex tape out, this has been the biggest lie in the industry in the history of entertainment."

People forget, but back in the Myspace days, Kim Kardashian was a fucking nobody, hanger-on of Paris Hilton and Lindsay Lohan.

When those two were out tearing the Hollywood and downtown LA clubs up on a nightly basis, Kim was fighting for scraps and doing whatever she could to get her name mentioned along with theirs on Perez Hilton, Daily Tuna, and the Tyler Durden dot coms of the internet 1.0. Constantly looking for the paparazzi and being an SBE pass-around. 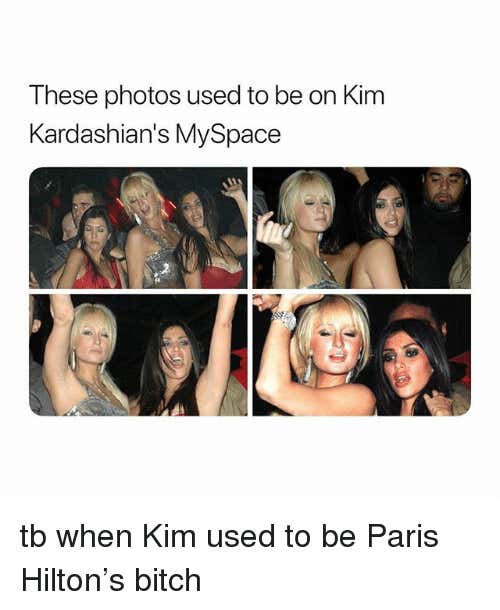 Arguably, nobody in the history of the world has ever tried harder to become famous than Kris Jenner. I mean she literally whored her own daughter out to the world in order to achieve fame.

Ray J – real name Ray Norwood – told DailyMail.com: 'I've sat in the shadows for over 14 years allowing the Kardashians to use my name, to abuse my name, make billions of dollars over a decade-and-a-half talking about a topic I've never really spoken about.

The former couple, who got together in 2002 when both were 21, made the infamous tape during her birthday celebrations that year. It was released in 2007.

Ray J, now 41, told DailyMail.com putting out the video was his idea and he suggested it to Kim after they saw how Paris Hilton's profile was boosted when the film she made with poker player Rick Saloman was leaked.

I mean look at the cover of the sex tape for crying out loud. How was this not a dead giveaway? 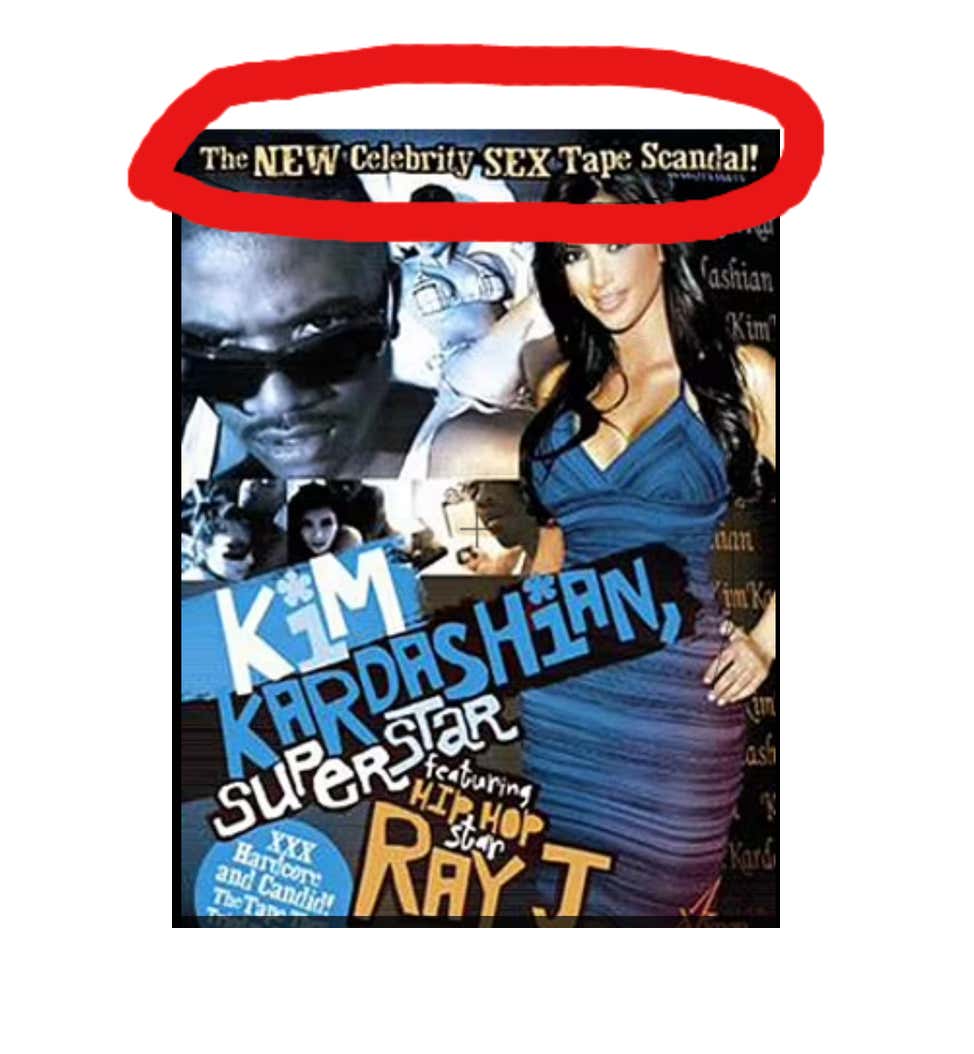 Riding Paris Hilton's wake of getting banged on camera for all the world to see. Except Paris Hilton was already a house hold name, so her situation was a legit scandal that negatively impacted her career.

The eventual contract, which was signed by both Ray J and Kim, was for three videos including two sex tapes, one made at the Esperanza Hotel in Cabo San Lucas, Mexico, and one created in Santa Barbara, and a third tape that is listed as an intro to the Cabo footage.

Only one tape – the video shot in Cabo – was ever released and dad-of-two Ray J told DailyMail.com that all of the intimate tapes were kept at Kim's house in a shoe box under her bed.

'She kept them all – she had to go find that tape [Sex Tape Cabo #1] and then present it. I never had a tape in my possession in our whole relationship.

'I never had a single one at my house – she had them at her house. She's always had all the tapes in a Nike shoe box under her bed.

and his career seemed like it might go somewhere. Finally stepping out from behind his sister Brandy's shadow when Kim K got her claws into him and then poof.

He has been crucified for two decades now and maligned as this scumbag who filmed and leaked a sex tape of this “poor innocent” girl. Meanwhile, it was her slime ball, conniving mother encouraging her the whole time, pulling the strings as usual.

In a later episode, her estranged husband Kanye West is seen boasting about collecting a laptop from Ray J and saying his family would no longer be 'extorted'.

But furious Ray J says the reality was very different: he handed over the device stuffed with intimate photos and 'mini-videos' sent to him during their four-year relationship after he heard via Kanye that Kim was worried about what kind of material the laptop might contain.

Despite Kanye's claims of extortion, Ray J says he did not ask to be paid, did not receive any money and was happy to hand it over to allay Kim's fears.

I've been walking on eggshells thinking I'm going to get in trouble for telling the truth and I've been holding onto it for the past 14 years and watching them humiliate me. They're celebrating my destruction

Instead, he described a four-hour meeting with Kanye at the private terminal at LAX where the pair spoke 'father to father' while the Yeezy designer sat on the floor and looked at everything on the laptop which he then took with him when he left.

And I know a lot of people are on the Kanye hate train recently, but mother fucker man. No man deserves this kind of shit. Having to sit on the floor at LAX examining pics and vids of the mother of your kids getting dug out back in the day. And then he has to take the computer to her and leave at her feet while knowing she's banging a frail albino who used to be his friend and tattoo's HIS kids names on him like a fucking weirdo. (Don't get me started on Skete. Blog coming tomorrow).

At the end of the day, this really isn't news to anybody as its what we've all assumed to have been the case for years now. It's just good to finally have confirmation so we can put a nice bow on it.

Somewhere Robert Kardashian is rolling in his grave.