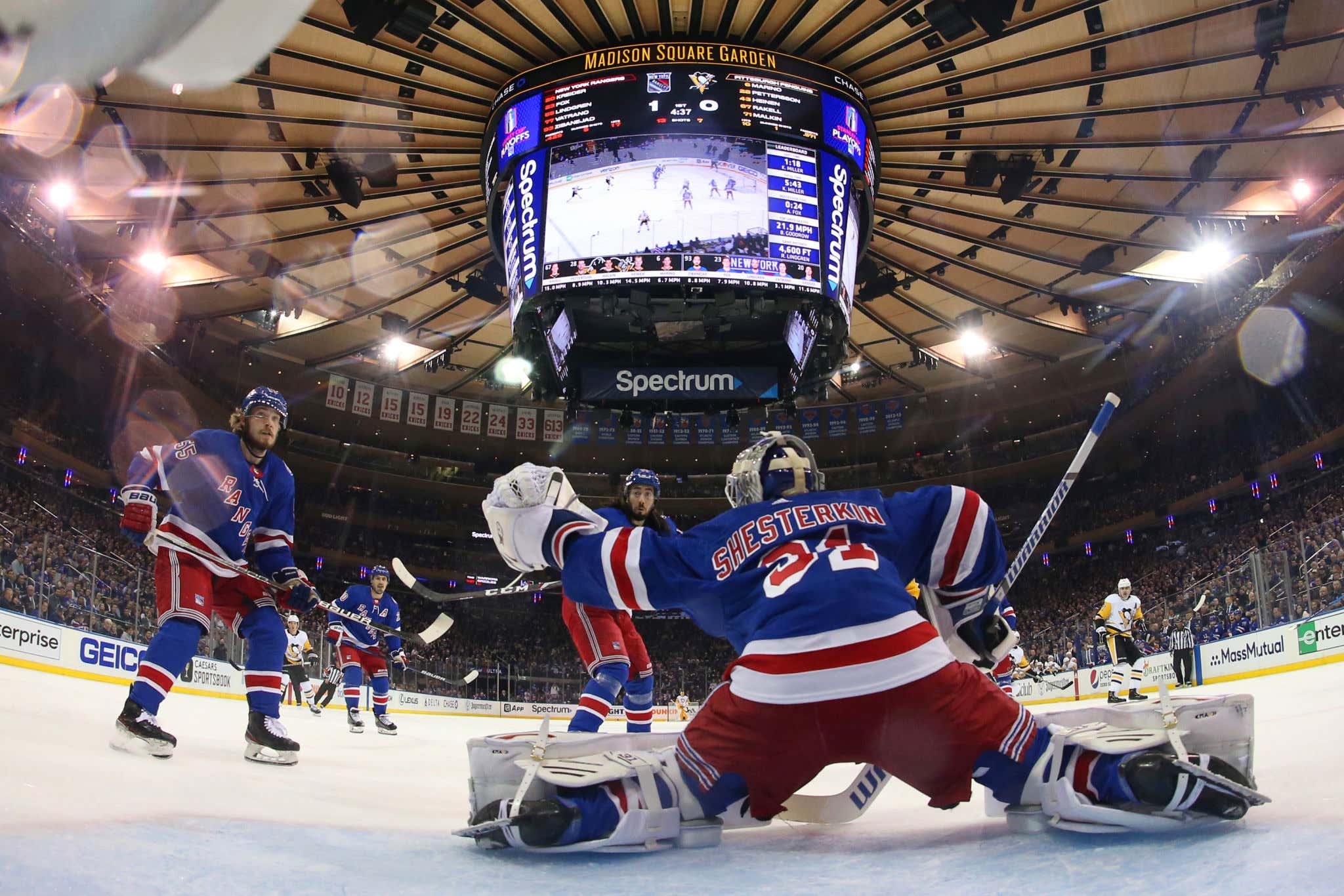 Rangers fans sure are a fickle bunch. Down the stretch it was all about "BRING ON THE PENS!!! WE WANT THE CUP!!!!" yet all it took was one game - one TRIPLE OVERTIME GAME - for doom & gloom to set in. Everybody needs to relax.

It's obviously not the ideal outcome, but if Chytil's late goal stands we're instead talking about how much poise they showed rising to the occasion and stealing a win late. Jordie hit the nail on the head in my opinion so I'm not gonna get too far into it, but my feeling is this. Watching the play live it's a 50/50 call so, to me, whatever the call on the ice was shouldn't have been overturned. It was though, and in the end the more experienced team found a way to pull out the win - as they should - against a young team largely embarking on a whole new realm of hockey.

There's a lot of silver lining here. First of all, the Rangers showed they can simply dominate Pittsburgh physically. Reaves was a wrecking ball, Lindgren (gotta hope he's OK for tomorrow) laid a clean bomb on Rakell and even Lafreniere showed he wasn't scared to throw the body around. That's a hard style to maintain throughout an entire game but it's something Gallant needs to get his squad to take advantage of more consistently. The opportunity is there for them to control play more with their physicality.

The kid line of Lafreniere/Chytil/Kakko looked great. Granted, their deployment largely steered clear of Crosby & Malkin but in their playoff debuts they all showed they're ready for the ramped up style of the postseason. Yeah the goal was disallowed but Kakko drove that puck to the net with zero regard for himself or anyone that might end up in his way. That's huge to see out of a kid who sometimes plays timid & hesitant. All gas, no brakes is what this team needs more of when attacking the offensive zone.

What can you say about Igor fucking Shesterkin? 79 saves. SEVENTY NINE. It took over 80 shots on goal for the Penguins to win a hockey game over the Rangers yet fans are panicking? If that's what it takes then the Blueshirts are sitting real pretty. It wasn't just 79 saves though. The Vezina shoe-in saved 5 goals above expected on any analytical model there is. He was tested with high-quality chances throughout and proved he's ready to strap this entire organization on his back if he has to.

Not all experience is delivered in a positive manner and the Rangers got a healthy serving of it last night. Learn and adjust. It's one game that's all. Giving up home ice after the first tilt is exactly the opposite of what this young group wanted - but they've proven all year long they're one of the most resilient teams in the league. They simply don't lose consecutive games with Shesterkin between the pipes. So after an outstanding 82-game season let's relax and trust this squad will bounce back like they always have before we go writing them off. Game 1's aren't series-clinchers by any stretch.