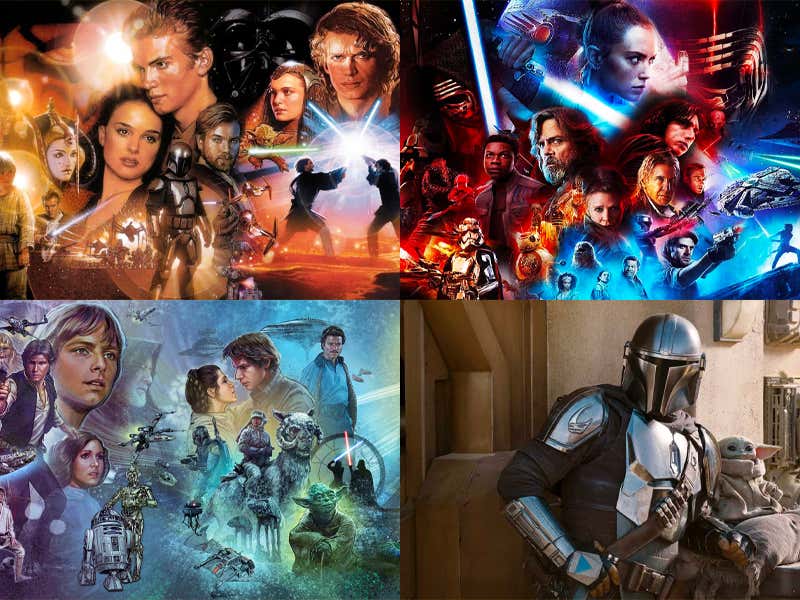 The movies that started it all are STILL the gold standard. If you ask me, there are four things that made these movies as great as they are.

1. The material George Lucas drew from: Lucas's inspiration came from Flash Gordon, was influenced by the mythology of The Hobbit, and the plot of the original mirrors the amazing Kurosawa movie 'The Hidden Fortress'.

2. The cast: Harrison Ford was making doorframes when George Lucas pulled him out and turned him into one of the coolest movie characters in history. Mark Hamill was great as both the innocent farm kid and the wiser Jedi. Carrie Fisher became one of the first truly great female badasses in movie history! Not to mention the stroke of brilliance getting James Earl Jones to become the most iconic voices in movie history.

3. The combination of Lucas AND Lawrence Kasdan: Kasdan had just finished the script for Raiders of the Lost Ark when Lucas asked him to write Empire Strikes Back and later Return of the Jedi. He joined in and helped make the movie darker and did a LOT of work on the characters. One of the biggest differences between the original movie and the later two is how much deeper those characters are.

4. The production value: There is something about those miniatures, puppets and real sets that just rocks. That is something that was lost in the prequel trilogies but revived in Rogue One and The Mandalorian.

What makes the Mandalorian so great is really as simple as Dave Filoni. He is basically the Peyton to George Lucas's Archie. He was raised on Star Wars, has a huge reverence for the source material and also for the things that inspired Star Wars. For example: Westerns. The Mandalorian is a space western that hits a lot of notes familiar to those who have seen the great ones. Filoni also realized something that I wish more people in hollywood would realize: CGI should not be used unless it is absolutley needed to create someone/something that you can't make practically.

Like some of you may think right now, I was hesitant to start this series because I thought it was a kids show. However, that couldn't be further from the truth. There are legit deaths, serious warefare and some very dramatic moments. No ark shows this off better than the multi-episode battle of Umbara

The series also does a phenomenal job of cleaning up the mess of the prequels. Filoni adds much needed depth to Anakin as a character, and also gives some more believability to his relationship with Padme. He also introduced a lot of great characters that are now making their way into live-action, such as Ahsoka and Cad Bane.

I think what Rogue One lacks in character work is made up for with some of the best visuals/shots in all of Star Wars.

Just a fantastic looking movie with some pretty good action.

I don't think Rebels has quite the same punch as The Clone Wars, and part of that has to do with it being more kid oriented. However, it does establish some cool lore, especially when it comes to Mandalore. It also has one of the great main-character deaths across all of star wars.

This movie had an uphill battle right from the word go. There isn't a human being on earth that they could have cast as a young Han Solo without eating a ton of shit from fans. What made it even harder was changing directors from Phil Lord/Chris Miller to Ron Howard halfway through production(apparently, mostly due to Kasdan disagreeing with the way Lord/Miller approached the movie). 70% of the movie was reshot, and it became a bit of a Frankenstein monster. Even with those struggles, I enjoyed the shit out of the movie. Alden was a solid Han and Glover was an even better Lando. There were some cool underworld elements and I think the heist scene was awesome.

Also, never forget i fooled a bunch of tourists into thinking my fatass was Alden Erenreich ahead of the movie's release.

I left the theater for the Phantom Menace as a kid thinking it was the greatest thing I had ever seen. Rewatching as an adult, though, it was very clear how horrid it really was. The same goes with Attack of the Clones. Over-CGI'd with some HORRIBLE dialogue from Lucas. This lead to some legitimately great actors like Ewan McGregor and Natalie Portman delivering some of the worst work of their careers. These movies are the ultimate proof that, no matter how big you get, you always need someone on your team that isn't afraid to tell you NO.

I will stand up for Revenge of the Sith, though. Opening up the movie with the war drums going into that massive space fight was sick as hell. The Obi-Wan/Anakin fight delivered, and I think it has a legitimately emotional ending. It might not have delivered on the promised climax of all 6 movies, but I think it holds up.

These movies are basically the opposite of the prequel trilogy, but achieved only a little bit more. The prequel movies had undeniable cohesion between the three, but the individual execution was poor. The Sequels had ZERO cohesion, but the individual execution was better. I'll stand up for The Force Awakens, which I think was a very solid start to the trilogy. TLJ was also an individuals good movie, but it just had almost nothing that bound it to the first one. The Rise of Skywalker then did an insane oversteer during course correction and turned the movie into a fan event.

Unfortunately, I think the lasting legacy of them with be the insanely annoying discourse around them as well as sociopathic nerds harassing multiple cast members off social media over a movie.

9. The Book of Boba Fett

The Book of Boba Fett never took off like I had hoped, but there were a few really cool episodes. Like I said when the show was airing, I think the biggest thing that got in the way of it's success was the fact that the Mandalorian exists. Mando, as a character, is everything Boba Fett was supposed to be. The stoic, no nonsense bounty hunter that is cool as fuck. They couldn't just do Mando 2.0 with Boba as a character, so I get taking it in a different direction. That direction just didn't totally work. Bad guy Boba turning into a nice guy crime lord that hates crime was just too confusing.

People also complained about how the series basically featured 2 full episodes of the Mandalorian. If you ask me, that was a great thing. You are there to be entertained with star wars content and that is what those episodes did.