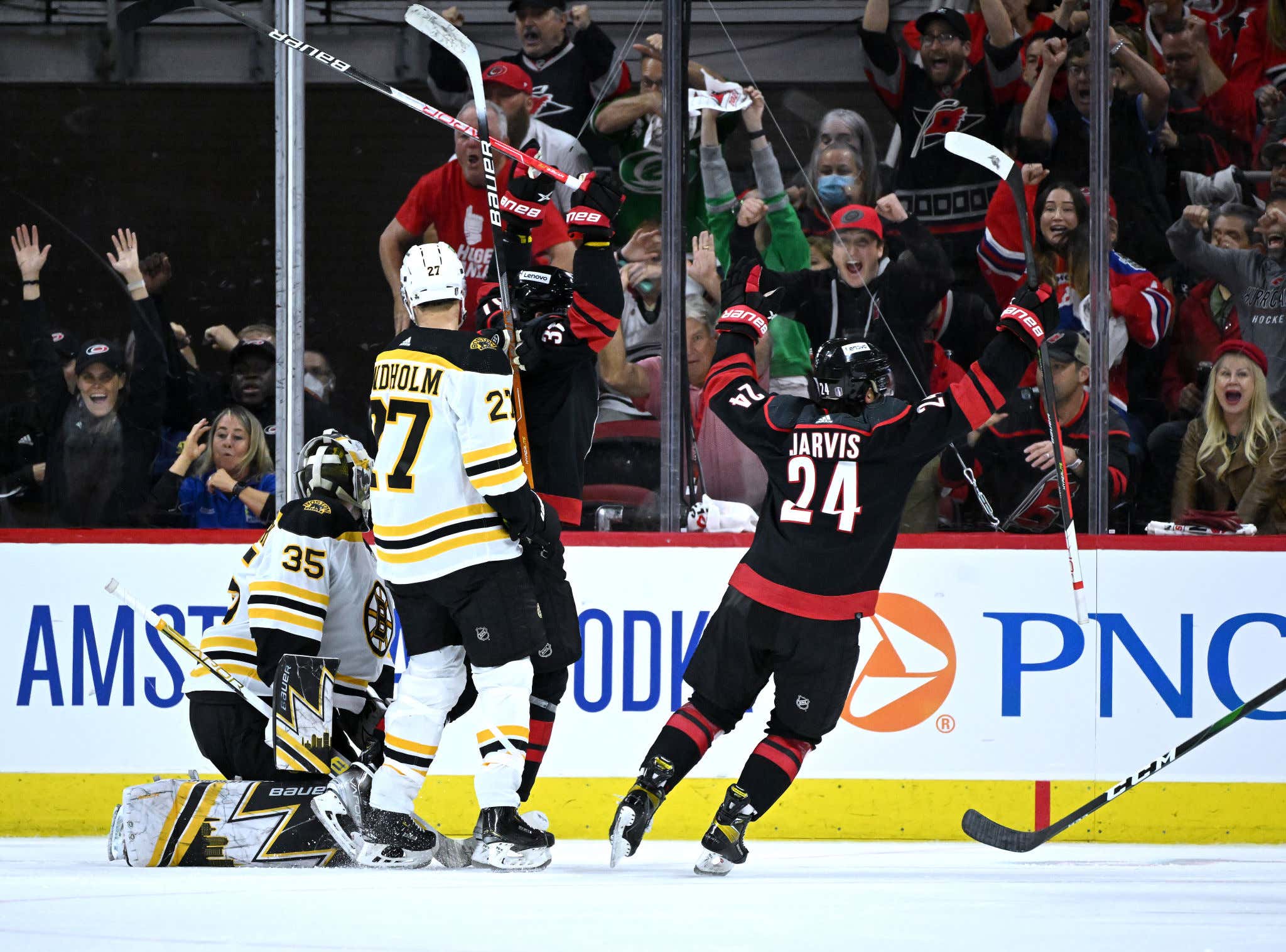 The Bruins opened up their 2022 playoffs campaign with a 5-1 loss in Game 1. While the score might seem lopsided, it was closer than it looks. Carolina buried their opportunities and Boston didn't. Simple as that. Let's get into it.

The Bruins came out with some jump to start the game and tilted the ice 7 shots to 1 early. However late in the period two soft calls against had them playing on the penalty kill. Both teams with some chances but no dice. 0-0.

With 3:32 left in the 2nd, Carolina broke the dam. Seth Jarvis redirect from Jaccob Slavin. 1-0 Hurricanes.

With 1:22 to go Carolina added to their lead, Nino Niederreiter. 2-0 Hurricanes.

Carolina regained their two goal lead at 7:02. Teuvo Teravainen buries the 2 on 1 after a Grzelcyk pinch. Brutal break. 3-1.

Vincent Trocheck put the nail in coffin with 3:01 in the 3rd. 4-1 Hurricanes.

ENG by Andrei Svechnikov and that was all she wrote. 5-1 Hurricanes.

- Physical game early on, as expected. Combined 90 hits in Game 1.

- Jordan Staal and the Hurricanes did a really good job shutting down the Bergeron line. Staal went 70% at the dot, whereas Bergeron had an off night at 40%.

- After some really quality chances by the Bruins late in the 2nd it was the Hurricanes who broke through. 2 goals allowed by the Bruins in 2:10 to completely flip the game. Back breaker.

- Taylor Hall gave the Bruins life in the 3rd, and nearly tied the game (hit pipe on ensuing shift) but Carolina extended their lead to 2 once again. The second line was by far Boston's best line tonight.

- That being said, the B's got nothing from the 3rd line, need more from Coyle and company in Game 2. They drew a penalty late in the 3rd, and Coyle nearly converted but they are an important line this series. Need to be better if B's want to advance.

- Carolina's penalty kill… as advertised. Really good. Killed all of 3 penalties, gave the B's absolutely nothing in a crucial must score PP midway though the 3rd. B's almost made it too easy for them at that point. It's Game 1 but the power play woes continue.

- Truly was a tale of Carolina finishing and Boston not finishing tonight.

- No Freddie Andersen (knee sprain) for the Hurricanes. Antti Raanta looked shaky to start the game but finished the night with 35 saves. Made the timely saves they needed.

- Linus Ullmark got the start tonight. Looked decent, both early goals coming with traffic right in front of him, one a redirect and one just got through while screened with bodies in front. Could've used a save late but can't blame him. I truly don't know if the B's go to Jeremy Swayman in Game 2. Wasn't Ullmark's fault whatsoever in Game 1 but maybe Swayman in net gives them some jump to start Game 2.

Game 2 coming up Wednesday night. Credit to the Hurricanes, they rode the momentum swings tonight and buried their chances. We'll see if Boston can make adjustments and bounce back. They had some good stretches tonight but wasn't enough. Onto Wednesday.