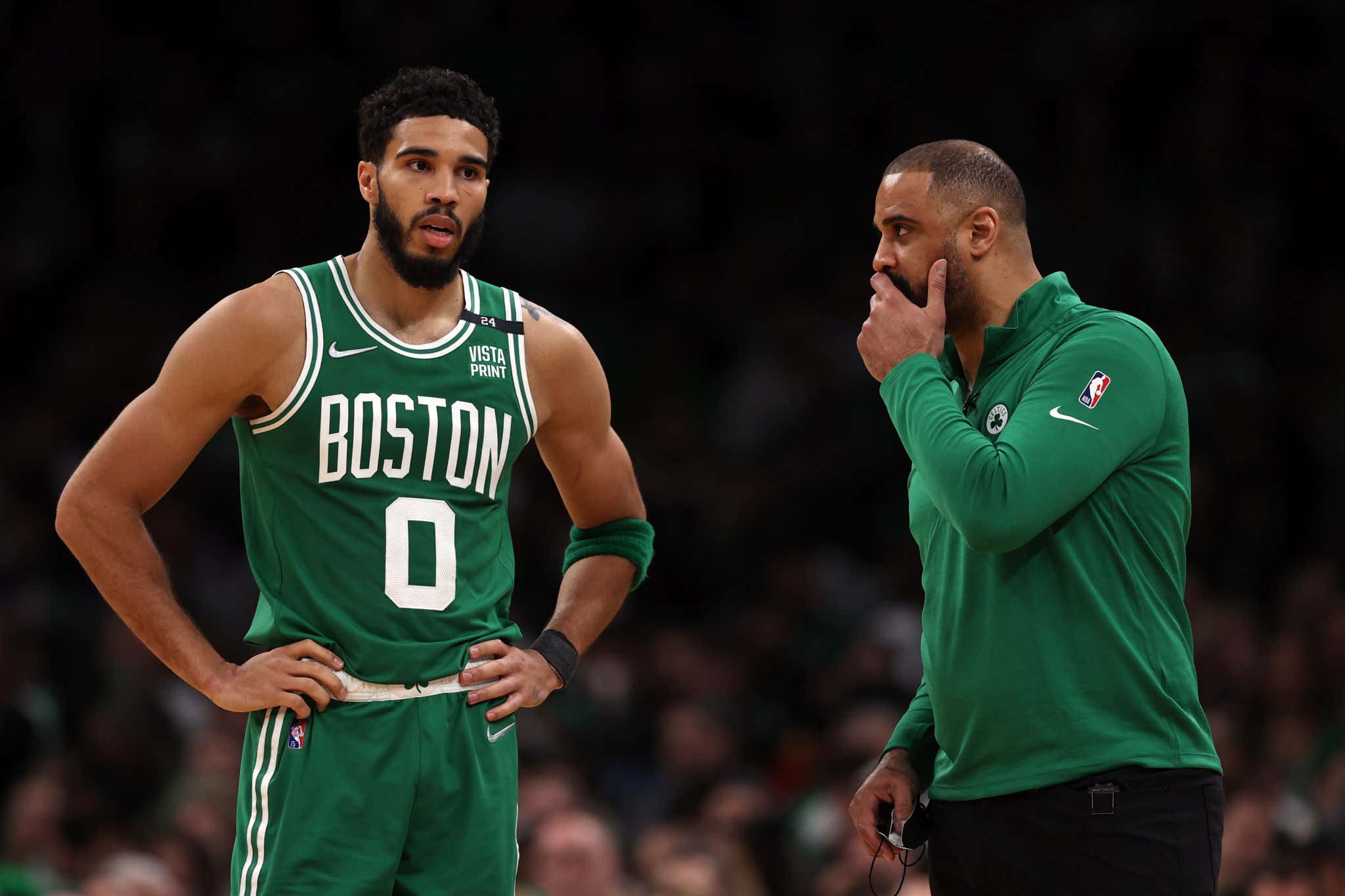 What makes this time of year so entertaining as a fan isn't just the high quality basketball being played by the best players on the planet. Something I've always loved about the postseason is the ensuing chess match. Being successful this time of year is about making adjustments and then executing those adjustments at a high level. Everyone goes back to their corner after each game and figures out certain tweaks that need to happen in order to win the next game. Whoever handles this aspect of a series the best usually comes out on top. It doesn't guarantee anything, but if you don't adapt you die. As they say, everyone has a plan until you get punched in the mouth and that is exactly what happened to the Celtics in Game 1. They took a shot square on the chin.

Now comes the interesting part. How do they counter? What adjustments can they make to ensure they do not fall into a brutal 0-2 hole heading back to a very tough place to play? While I'm most certainly not Ime, I have some thoughts. Do I think that somehow there will be someone on that staff/Brad that reads this blog? Of course, don't be an idiot. No. But do I think that speaking this shit into existence can help on a cosmic level? You bet your ass I do.

So if it were me, these are some slight adjustments the Celts should make. Obvious shit like "don't turn it over a billion times" or "don't miss 30+ open threes" isn't really what I'm talking about here. We all know they have to correct those two things. But from a strategy standpoint, here are a few adjustments I'd like to see.

Get into your sets quicker

Anyone who watched this game knows that the Bucks ball pressure really fucked this team up. It through off their rhythm, it prevented them from getting into their sets in a timely fashion, and usually we saw the Celts initiate an offense set with around 10-13 seconds left on the shot clock.

Remember when this offense sucked ass and played super slow? Often times it's because guys like Dennis was rolling the ball up, but the simple issue of only having around 10 or so seconds to actually run an offensive set is how you end up stalling out on that end. It leaves less time for movement, usually ends up in either isolation or one or two passes before a three, and Game 1 was full of these examples.

The key to the Celts being successful against this defense is to make the Bucks actually move around. To do that, you can't be wasting the first half of the shot clock just getting into your set. Here's a good example.

Look at when this set starts, right around the 20 second mark. That's what I want to see. Offensively it's nothing complicated, but good ball movement forces the Bucks defenders to actually rotate. They are so focused on stopping the drives, that they will give you open looks as long as you do the bare minimum to force them. Compare that to this possession in the first quarter

For starters, look at the shot clock when Tatum begins his move. Don't love that. I also don't love how the Celts really didn't make any Bucks defender do anything. Look at where everyone is 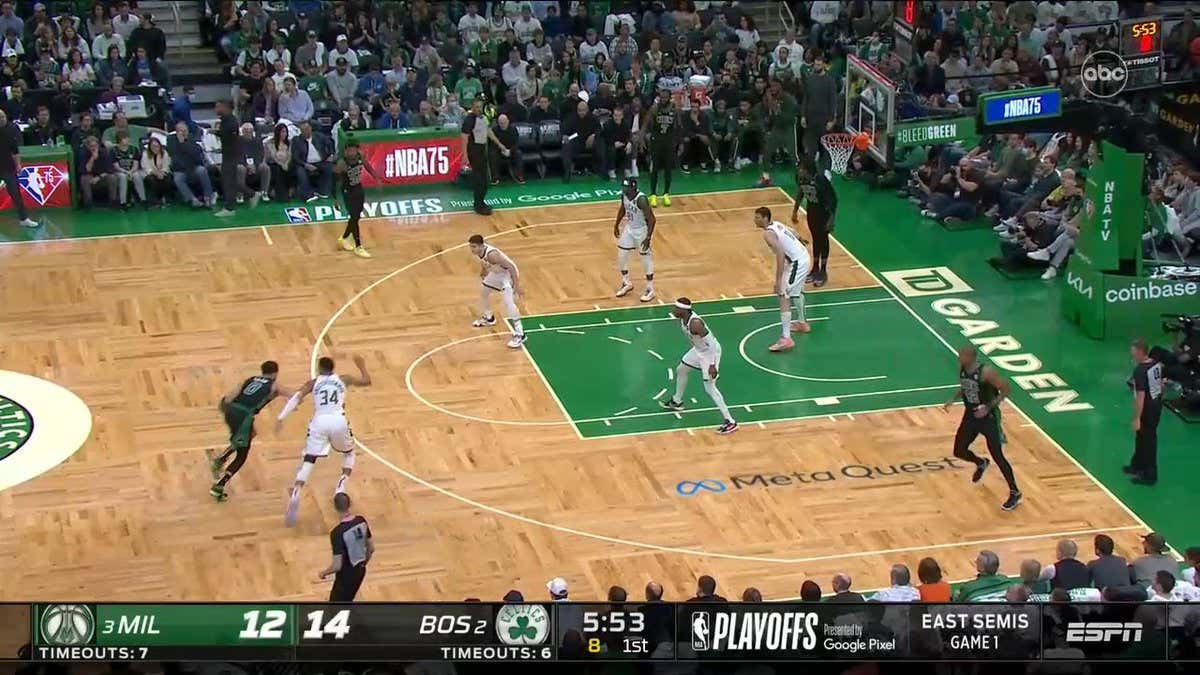 everyone is camped in the paint ready to collapse on Tatum. Even Horford's movement doesn't really get his defender out of the paint so it may as well have been useless. This is what the Bucks are going to do all season long and why I think the Celts need to do all they can to avoid these type of isolation drives from Tatum/Brown or at least don't over-rely on them.

The goal should be to force the Bucks to defend for a full 24 seconds. That's going to help continue to generate good looks as well as increase your chances that an elite rim protector will be pulled away from the paint. That brings me to my next point.

If there's one thing the Bucks do struggle with, it's defending the P&R. Both from a roll man and ball handler perspective. We saw it be effective in Game 1 at times, but I didn't see it nearly enough. The adjustment I would like to see the Celts make with this isn't just running it more, but also their decision making once they actually have the Bucks in P&R. With such elite rim protection, the Celts have a few options.

These two clips show you some options available to the Celts that they simply did not take. In the Tatum clip, we see him get here 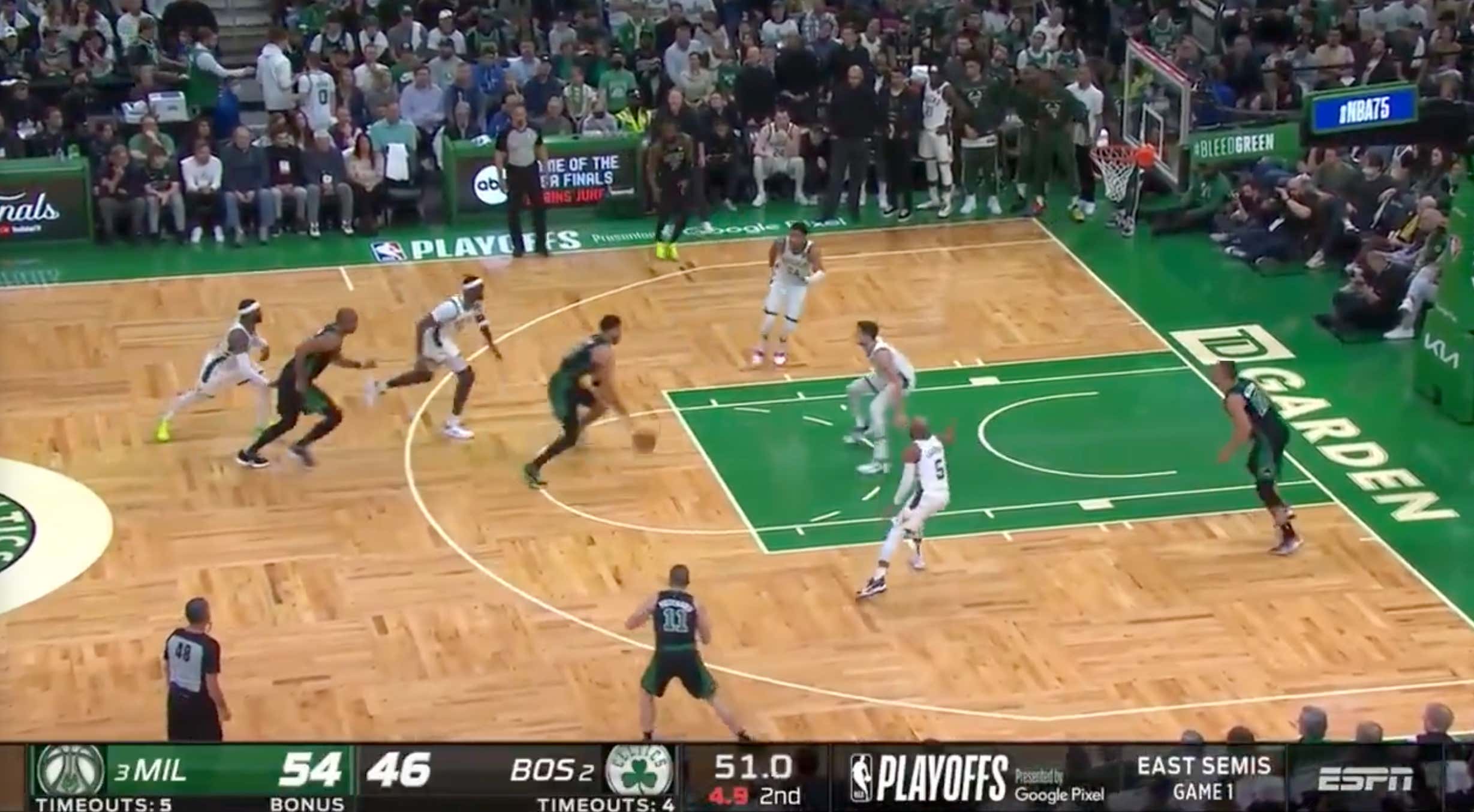 On this play, Tatum gets past Portis at the level of the screen but he either didn't see Giannis or thought he couldn't get to his shot and was solely focused on Allen who stepped up. That's a silly assumption considering it's freaking GIANNIS, but here's the Game 2 adjustment. How do you negate Giannis' rim protection? Pull up from the FT line. If the Bucks are going to play drop, beat em with that new found space. We also see Grant open on the baseline, and while there's obviously a change Giannis gets there, I like the odds of a shot like that compared to a play where Tatum has his head down and doesn't see Giannis coming weakside.

We see a similar decision making error on the Smart play. After the screen, he gets here 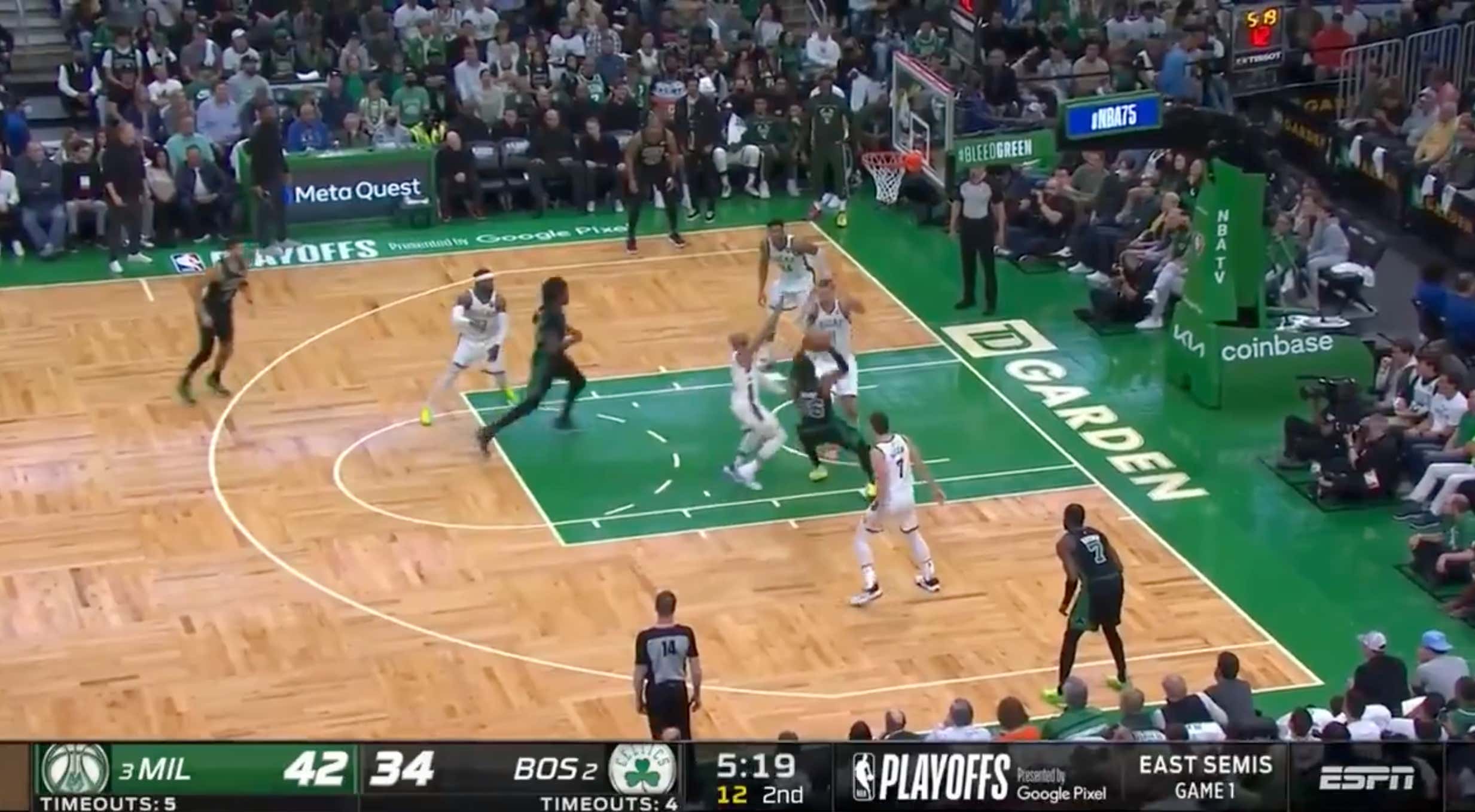 By now, Lopez has recovered and taken aay the shot at the rim, but Smart is in a position where he can't see Rob until it's too late. He does a good job of finding Horford in the corner who does a good job of attacking the closeout, but this ends with a low percentage Smart look from deep. Ideally, he's passing this to Rob much earlier as he begins his rim run. I trust Rob enough as a passer to swing it to Horford if the Bucks cut off his lane to the rim, and by then Giannis is committed and Al can just take the corner three. Smart missing that read and then waiting a split second to give Horford the ball is what allows Giannis to recover.

This brings me to my next point

We saw two missed opportunities in those two clips above, but here's another one from Jaylen that stood out to me.

To beat the Bucks, it's all about finding the easiest shots possible. More than a handful of times we saw the Celts do the exact opposite, instead choosing for much more difficult looks, especially once they got into the painted area. We see Jaylen attack in P&R (good), but this possession tells me he had a little bit of tunnel vision the whole time. That shot was going up regardless, and given Lopez was right there to challenge, that's a tough shot. This was at a point in the game where the Celts had been in the middle of a brutal scoring drought, and look what Jaylen never sees 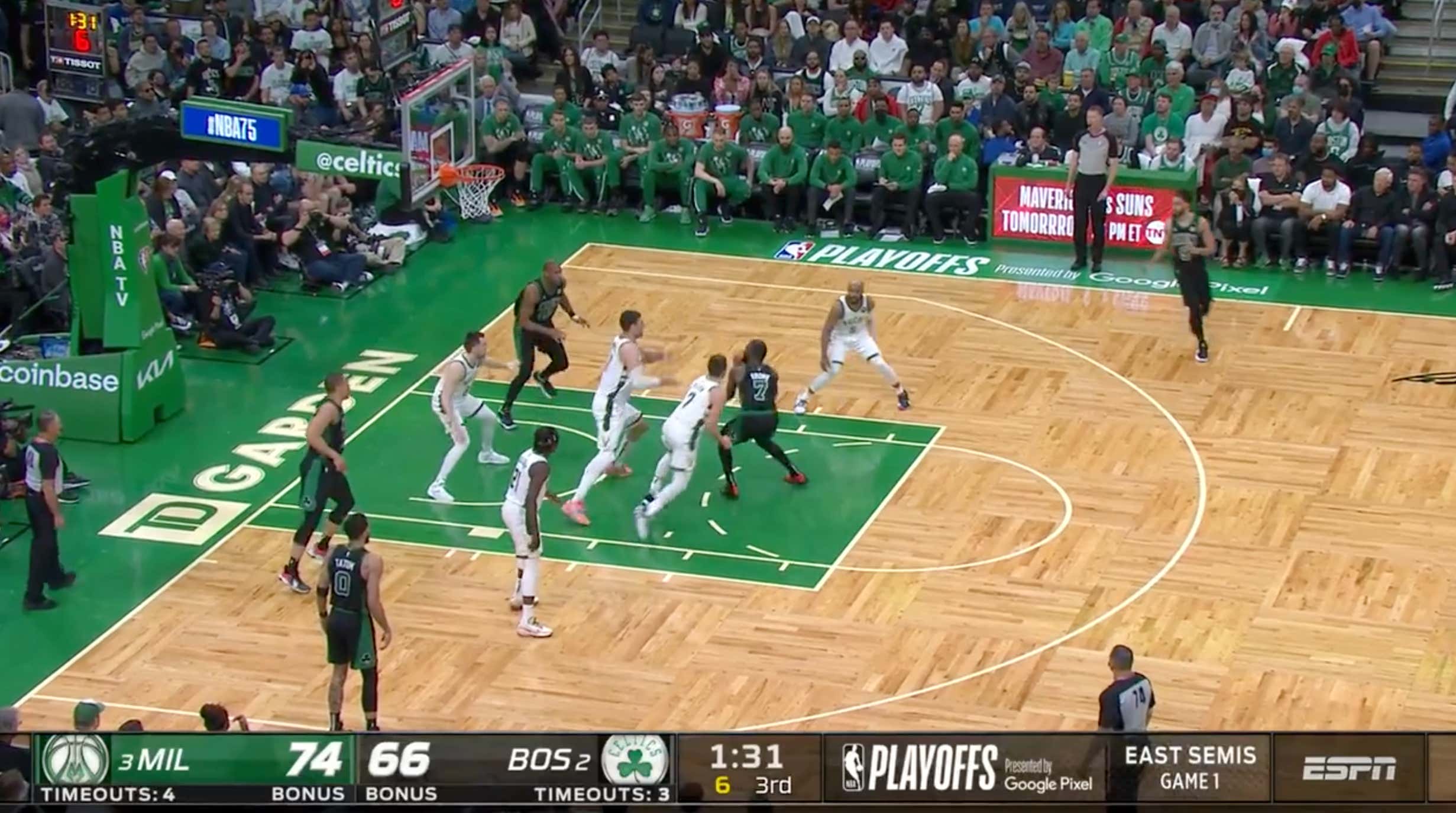 Al is right there. Keep the ball high so Connaughton can't strip it, and this is a high percentage look. It's certainly a better look than shooting over two guys, one of which is a 7 footer. You have to make this pass ESPECIALLY because Giannis isn't in the game, there's only one MIL big. If you remember, this was when the Celts fumbled their non-Giannis minutes and plays like this were a big reason why.

This is all why you should feel optimistic as a Celts fan though. The Celts are getting to the spots they want, they just need to be way better in terms of decision making. Making the easy pass is all you have to do, so just limit the possessions where you are willingly making things hard on yourself. Trust in your teammates, you know, the thing that made the turnaround so successful in the first place.

Make sure you help the helper

Guarding Giannis is a pick your poison situation. If you don't bring help, he'll lower his shoulder and get through you. Maybe he'll hit you with the spin and you're dead either way. We did see some possessions where the Celts were selective with their doubles and it seems to work on occasion.

We also saw examples of when doubling/helping on Giannis goes wrong. Take this play in the 3rd quarter

Here we see Rob slide over and help Al, which is fine. With that rotation, we see what the Bucks do to counter it. They have Lopez cut, which forces Smart to make a decision. He has to leave Jrue to account for that movement and take that pass away from Giannis. 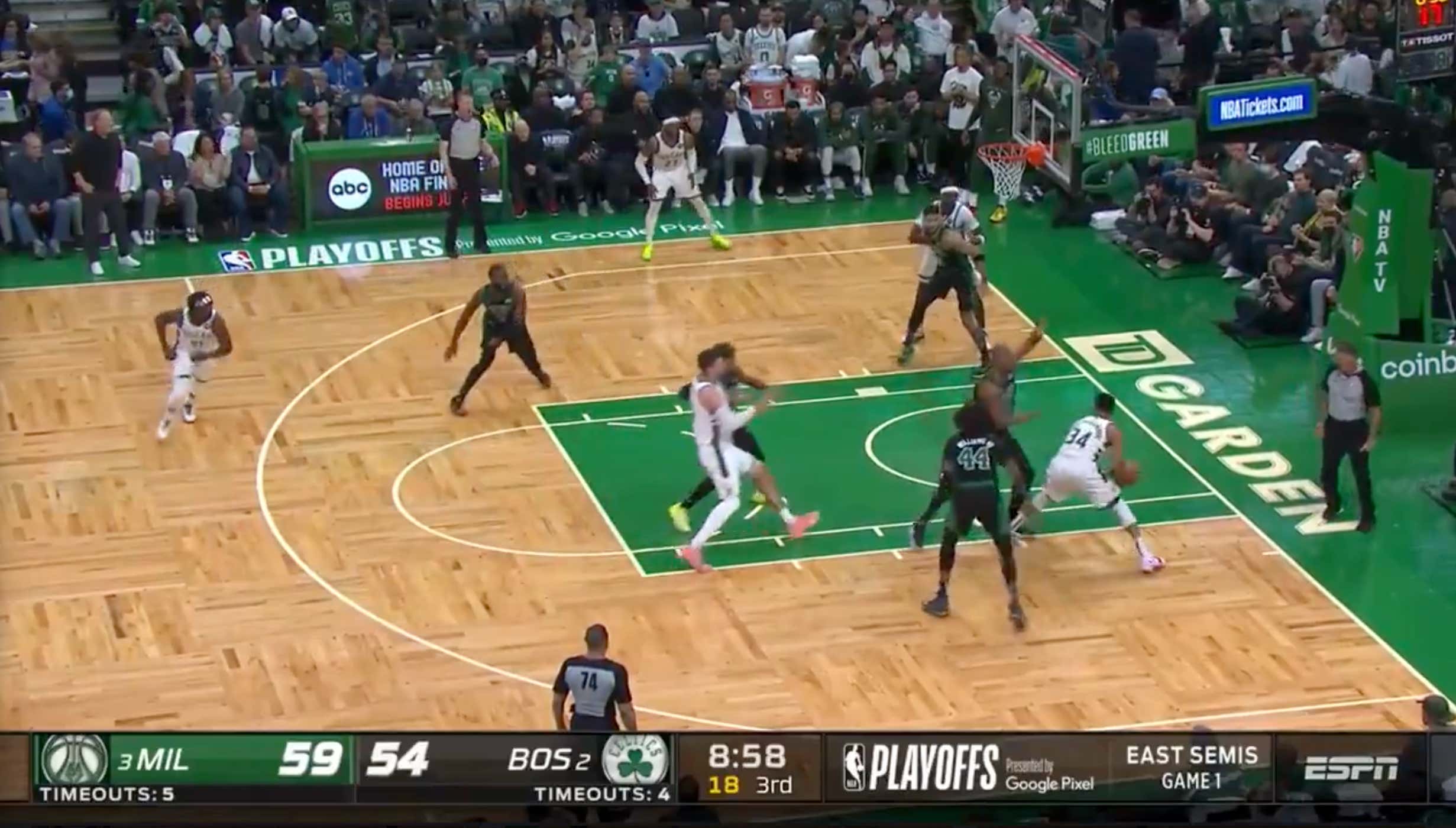 Watch Jaylen. He's watching Giannis as Jrue rotates over to fill in Lopez's spot. He worries about the corner and sort of stops coming over 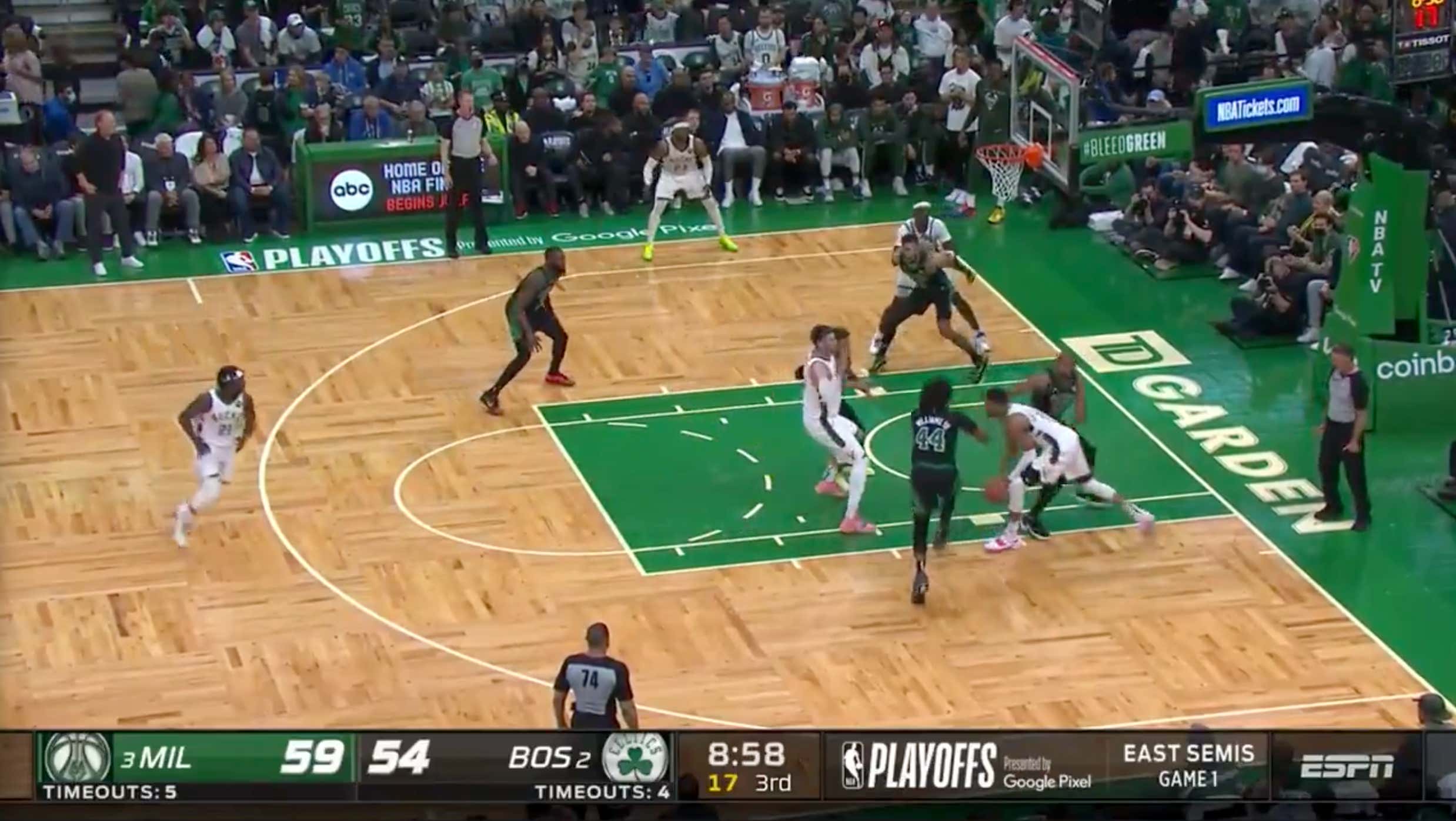 I'm assuming here, but my thought is he was worried about Portis having Tatum pinned down and Wes Matthews getting a clean corner look. By the time he realizes that the corner pass isn't there, it's too late and Smart has to come from the restricted area just to try and contest the Holiday three, which he makes. 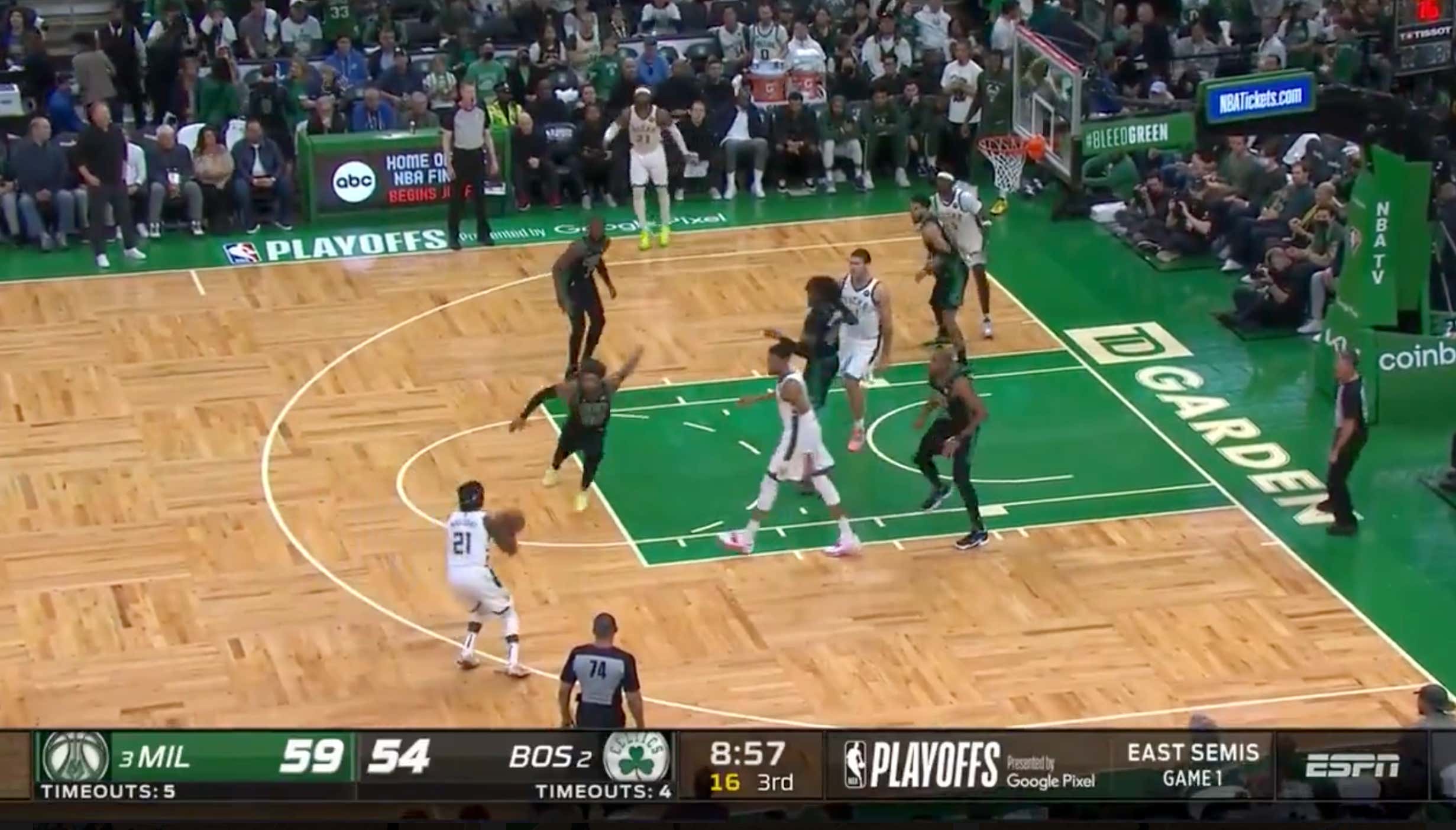 If the Celts are going to double Giannis on the block, their communication and the execution on the perimeter is crucial. Here's another example of when doubling Giannis didn't really work out

I don't love doubling here with Smart when there's no other body there to recover and rotate over to the shooter that Smart is now leaving. I'd much rather have Al come over and then Tatum handle the cutting Lopez. Look at Smart's reaction the second Allen catches the ball. He gives a "what the hell?" type of reaction because there was no helping the helper. Tatum sort of just stood there in his zone and Allen went over to the space. To me that's mostly just a communication issue and something I imagine they iron out during their film session.

I have no issue with doubling Giannis, you just have to be on top of your shit when it comes to helping the helper. If you aren't the Bucks are going to bury you from deep.

Of course, the Bucks are going to have their own adjustments. That's how this thing works. But if the Celts can clean up some of these mistakes and get back to not turning the ball over a billion times, they have as good as chance as any to tie this series up 1-1. I don't want to sound dramatic, but their season might depend on it.