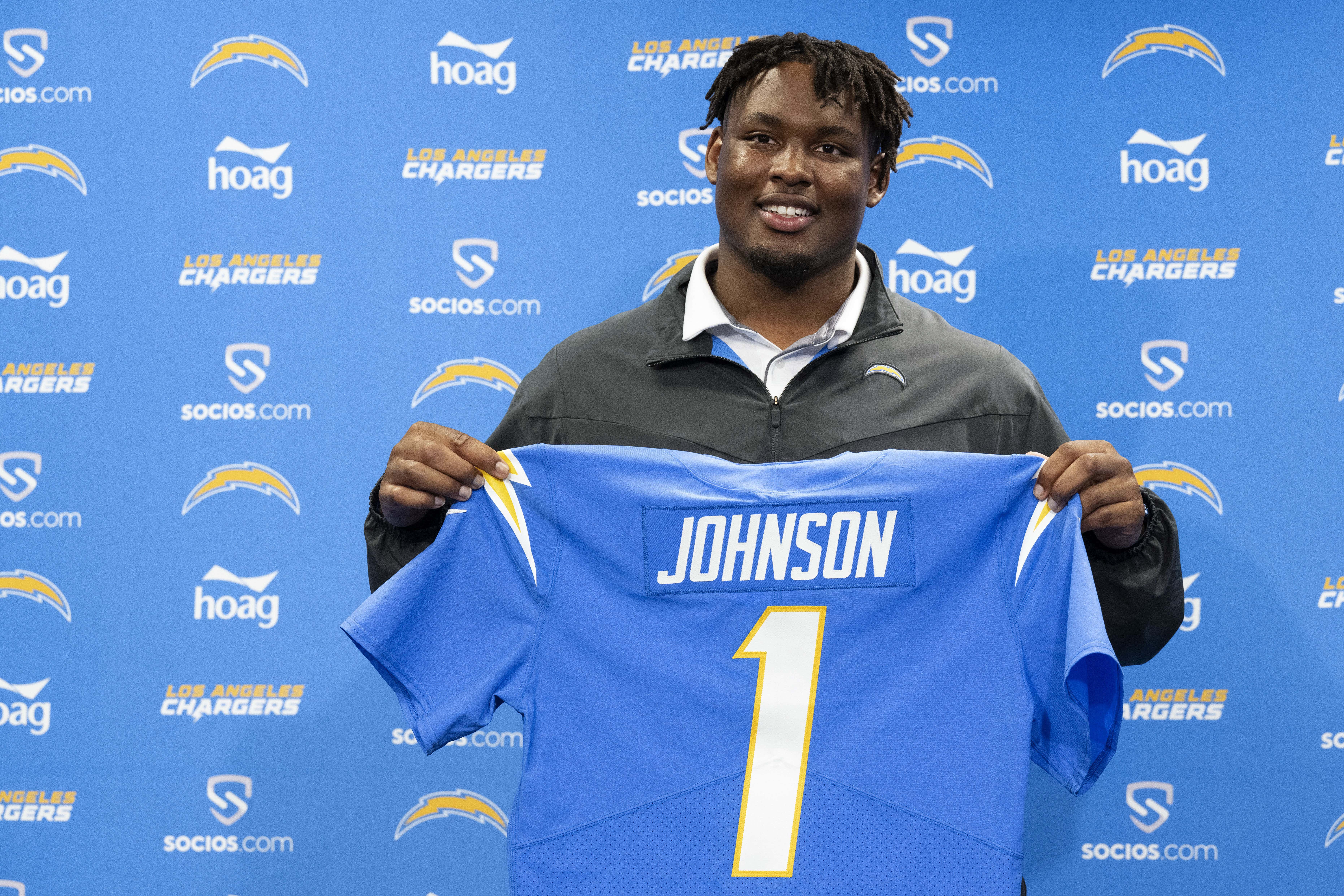 Going into this draft, there were a few glaring needs for the team that didn't get addressed in free agency: RT, RG, CB3, LB. They addressed most of the problems, but there are still a few question marks going into the very early part of this season. Here are the picks.

1(17). OG Zion Johnson: This is the pick I wanted more than anyone at this spot and it is because he immediately fills the chargers biggest need: Right Guard. The right side of their line was awful and they need to protect their franchise QB against the ramped up pass rushing in the division. Zion was a beast at BC, can play all three interior lineman spots and can work with any scheme.

2(79). S JT Woods: He's tall(6'2), fast(4.3) and pretty damn good at tackling. He's good at getting past blockers and has a really high motor which is great as a pair for Derwin James. Safety might not have been a premium position for the team but I'm thinking about it this way: They have an elite CB1, a very solid CB2 in his sophomore year, and an elite SS. The only question mark here is CB3 and FS. Instead of reaching for a CB3 after the premier guys were off the board, I'm happy with getting a potential starting FS depending on how Nasir Adderly shakes out.

3(123). RB Isiah Spiller: RB2 was a huge struggle for the offense last year. Joshua Kelly wasn't good, Larry Rountree only had it in flashes, and Justin Jackson is gone. With Spiller, they get a player that is kind of similar to Ekeler in that he can run, catch and block well. He forced 100 total missed tackles and had 1,000 yards across each of his last 2 seasons at A&M, catching 74 receptions across the last 3 as well. I like filling that need, but with the AFC West loaded up with offesnive talent, I would have thought they'd have more of an emphasis on filling in the defense with their mid round picks.

4(160). DT Otito Ogbonnia: He is strong, heavy, explosive and good at fighting through double teams. I love having a guy like that to help shape up the IDL group of SJD, Austin Johnson and sigh Jerry Tillery. He was never much of a pass rusher at UCLA, but that's what Bosa and Mack are for. Ogbonnia can help shore up the run defense that was one of the worst in the league.

5(195). OG Jamaree Salyer: This was sneakily one of the biggest steals of the draft. The guy grinded the bones of SEC pass rushers to make his bread at Georgia and was a fantastic run blocker. He might be a little small to slide in at RT, but he could theoretically move to LG with Matt Feiler moving to RT. Most analysts had him slated as a second or third round pick, so I am pumped to see what this big boy can do to protect my sweet prince Herbert. Here is also some promising tape of him eating the #2 overall picks lunch.

By the way, with the Salyer pick, the Chargers grabbed 3 of the top 5 bench press players in the league.

6(214). DB Ja'Sir Taylor: He's a little small (5'10) for the position, but he is fast as all hell and a smart player. He has six interceptions, a pick six, and 24 PBUs as a DB, but he will likely be more valuable for his special teams contribution. Last year, he average 26 yards/KR and took one back to the house. With his speed, he will be an incredible gunner and possible future return man depending on how DeAndre carter turns out.

7(236) DB Deane Leonard: This is another guy who will, most likely, be a primary contributor on special teams. He has good speed(4.39) and height(6'2) but needs to be worked on in order to play DB. In 2 years at Ole Miss he never had an interception.

7(260) FB Zander Horvath: I love this pick if for no reason other than Zander Horvath is a great chad name. Oh and, before you ask, his given name is Alexander. He is THICK, strong, and should immediately contribute on special teams and eventually at FB in place of Tre McKitty.

QB Brandon Peters: The Illinois QB wasn't particularly good, but will compete with Easton Stick for the QB3 spot. Although, the team did come into games with three QBs a TON of times for some reason. Maybe they come in with 4 for some inexplicable reason.

K James McCourt: Another Illinois guy, he was 26/26 on extra points. It's weird to say but that skill, which is usually a given for kickers, is now a commodity.

WR Trevon Bradford: The Chargers have always been good at UDFA/late pick RBs/WRs, so I always make a point to check them out. Bradford was with Oregon State for 5 years and had totals of 1,900 yards and 14 touchdowns.

RB Leddie Brown: At WVU, Brown had back to back 1,000 yard rushing season and caught 86 passes in his career. Like I mentioned with Bradford, keep him on your radar.

TE Erik Krommenhoek: He's 6'6 which is usually enough to get you a look at this spot. TE is a wide open spot for the team, though.

LB Tyreek Maddox-Williams: I like Rutgers guys for some reason, and TMW was pretty good over his career there. He has the height and size for the position and compiled 193 tackles, 14.5 TFL, 2 sacks, 7 PBUs and 2 FF during his career.

S Raheem Layne: He has solid potential to be a special teams contributor like he was at Indiana.

OLB Ty Shelby: Like TMW, he has good size for the position at 6'4 259. Hell, maybe have him pack on more weight and turn him into an IDL.

TE Stone Smartt: He is a QB turned TE that, like Krommenhoek, has good size for the position.

S Skyler Thomas: He had some good stats at liberty, but I inherently don't trust anyone named Skyler.

C Isaac Weaver: He is also huge(6'6, 303) and I also think he could potentially be good depth.