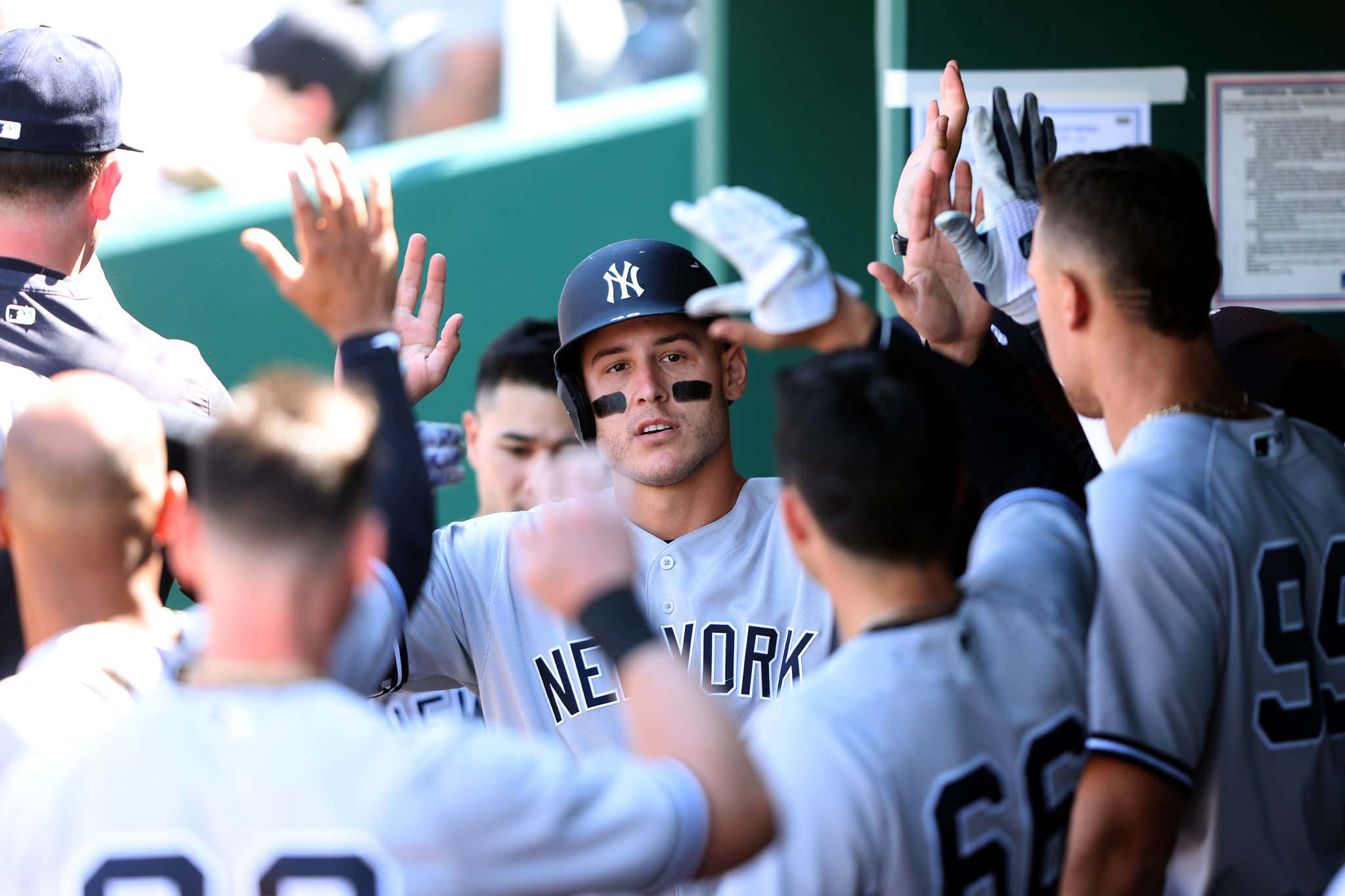 It's crazy how fast things can change in the game of baseball. Through the first 10 games of the season the Yankees had their worst team OPS in over 30 years. It was a chore to watch these guys try and score a goddamn run. Flash forward a few weeks and the New York Yankees have the best record in Major League Baseball along with the best run differential in the American League.

When I blogged about their slow start a few weeks ago I brought up a few things that were bothering me: 1) the ever-changing lineups 2) the scheduled rest days 3) Gallo-Gleyber 4) shortstop Isiah Kiner-Falefa

In the weeks since that blog on April 18th, the lineup has gained consistency at the top with you frequently seeing DJ-Judge-Rizzo-Stanton-Donaldson as your top 5. DJ, Judge, and Rizzo is such a difficult 1-2-3 to navigate at any point in the game. Stanton goes through his streaks, but when he's locked in I don't know if you get a better first four in the league.

The scheduled rest days are still happening, with Rizzo getting Sunday off and Judge sitting Saturday, but at least they were in preparation for the upcoming Toronto series and not during it. I'll never get on board with these, but I get less mad about them when they're winning.

Joey Gallo is still mightily struggling at the plate, although he did have a few homers recently. I still don't like his fit and cannot rely on him in any big game or moment. Boone has had no problem sitting him more than any other player, so at least that's happening, Gleyber on the other hand, has picked up his production lately, slashing .348/.360/.609 in his last seven games. The full month's numbers aren't great, but I'm hopeful he's finding his groove now and that will continue.

Isiah Kiner-Falefa has really come on these last few weeks and it's been a huge boost to the bottom of the order. Since the beginning of their road trip in Baltimore, IKF is batting .349 while playing some real good defense at short. He's not on the team to post some robust OPS number and hit homers. He's here to put the ball in play, keep the line moving, and defend. It really seems like since he got past his first home stand at Yankee Stadium the weight on his shoulders has lifted. It's nice not really having to worry about ground balls to short anymore.

The Yankees are currently riding a 9 game winning streak into a massive series in Toronto. That nine game stretch did come against the Guardians, Orioles, and Royals, I'm well aware. Not exactly world beaters, but you know what? The Yankees weren't taking care of these teams last year and it's a big part of the reason they found themselves as a road team in the AL Wild Card Game in 2021. You need to beat the bad teams and that's what they're doing. The Red Sox, on the other hand, are choosing to beat zero teams and it's reflecting their place in the division. The battle for 4th is exciting!

Yesterday was a game the Yankees simply do not win last year. After the Royals got to Sevy in the 3rd and 4th, the team found themselves down 4-1 on getaway day. It was the perfect game to pack it in, settle for a series W, and move on. Not this team. They fought back and found a way to regain the lead thanks to some big hits from IKF, DJ, and Judge.

Speaking of Aaron Judge, that behemoth is on fire. After an offseason that resulted in him betting on himself, the Yankee RF started a bit slow in terms of power he's figured out this whole hitting thing again. In 21 games so far he's at .300/.364/.663 with a 203 wRC+ with 8 homers and 16 RBIs. Pay the man whatever he wants.

The Yankees pitching continues to shine, especially the bullpen. Michael King has been otherworldly so far, posting a 0.61 ERA and a 0.89 WHIP in 14.2 innings. He's been the Yankees fireman, called to put out any trouble on the bases. On Sunday he came into the 7th and immediately induced an inning ending double play ball which preserved the lead. If you talk to him you'll easily find out he still wants to be a starting pitcher, but he's really found a home out there in the pen as Boone's weapon X. He stays there until further notice. Along with King, Clay Holmes (0.84 ERA), Aroldis Chapman (0.00 ERA), Miguel Castro (2.16 ERA), Wandy Peralta (2.45 ERA) and Clarke Schmidt (1.08 ERA) have really formed a dominant group out there in the pen. That's not even including Loaisga who got off to a slow start, but has looked much better in recent outings. I don't want Green pitching in high leverage anymore, but he's not a bad option to put out there when everyone else is spent I suppose. I challenge you to find a better pen in the sport.

Great start to the season, but a big series looms starting tonight in Toronto. You want to prove you're the team to beat here, go take 2 of 3 in Canada. Episode just went live on YouTube, give her a watch.

if you prefer audio form check us out here