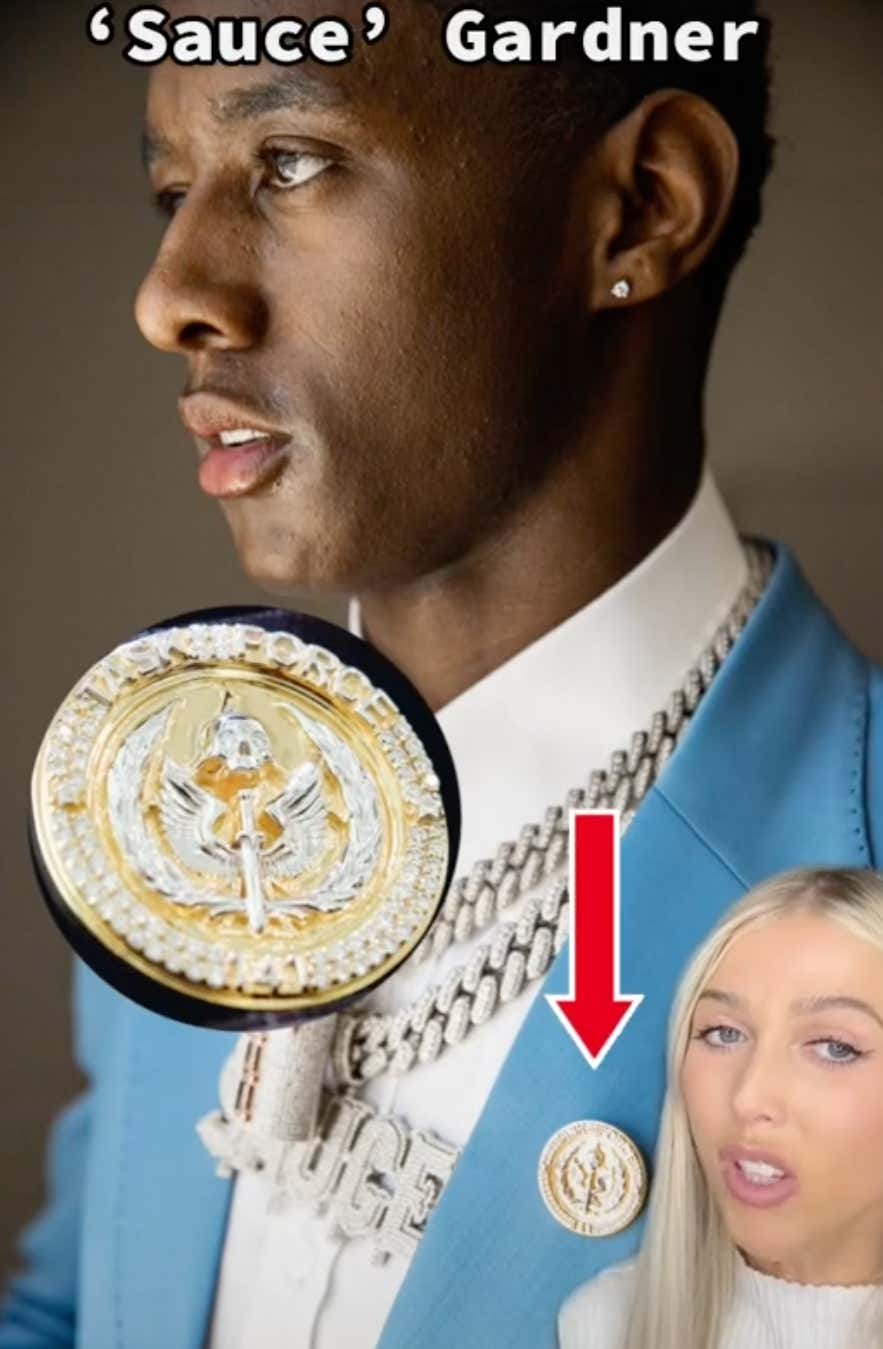 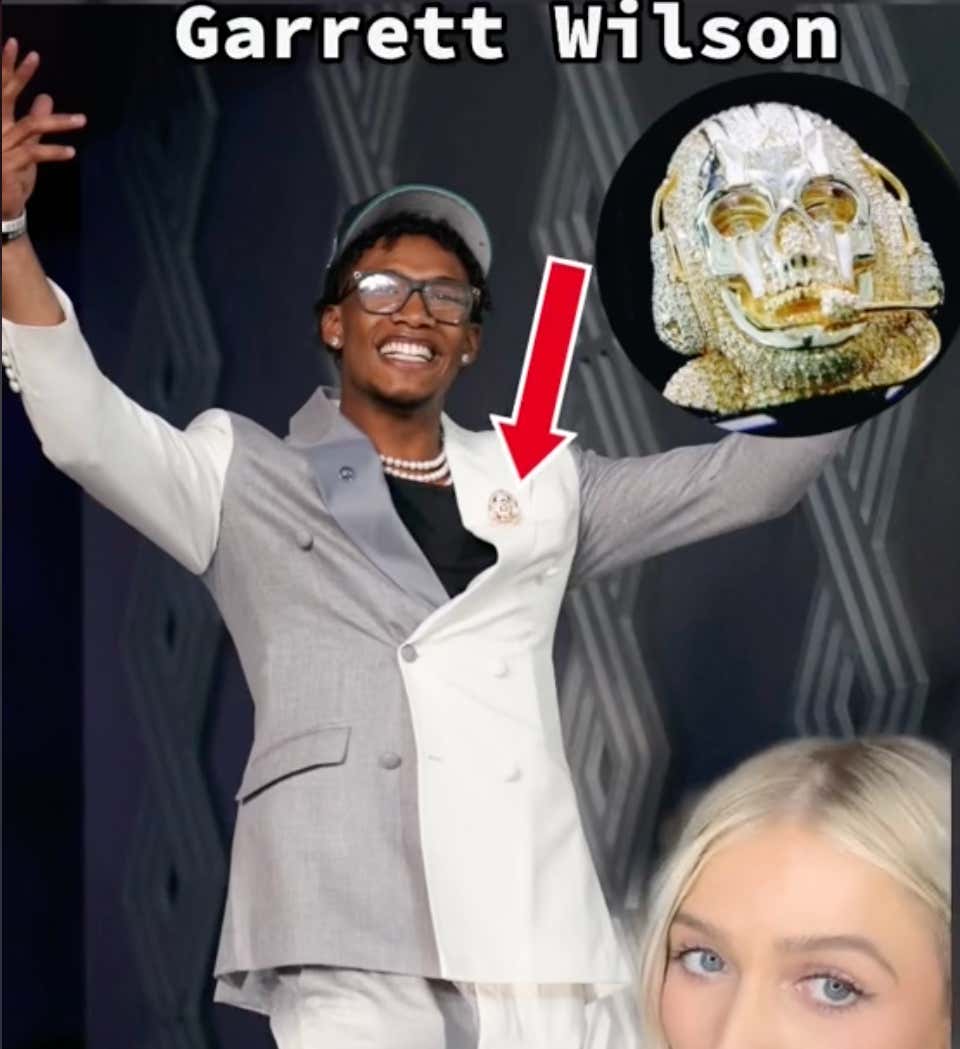 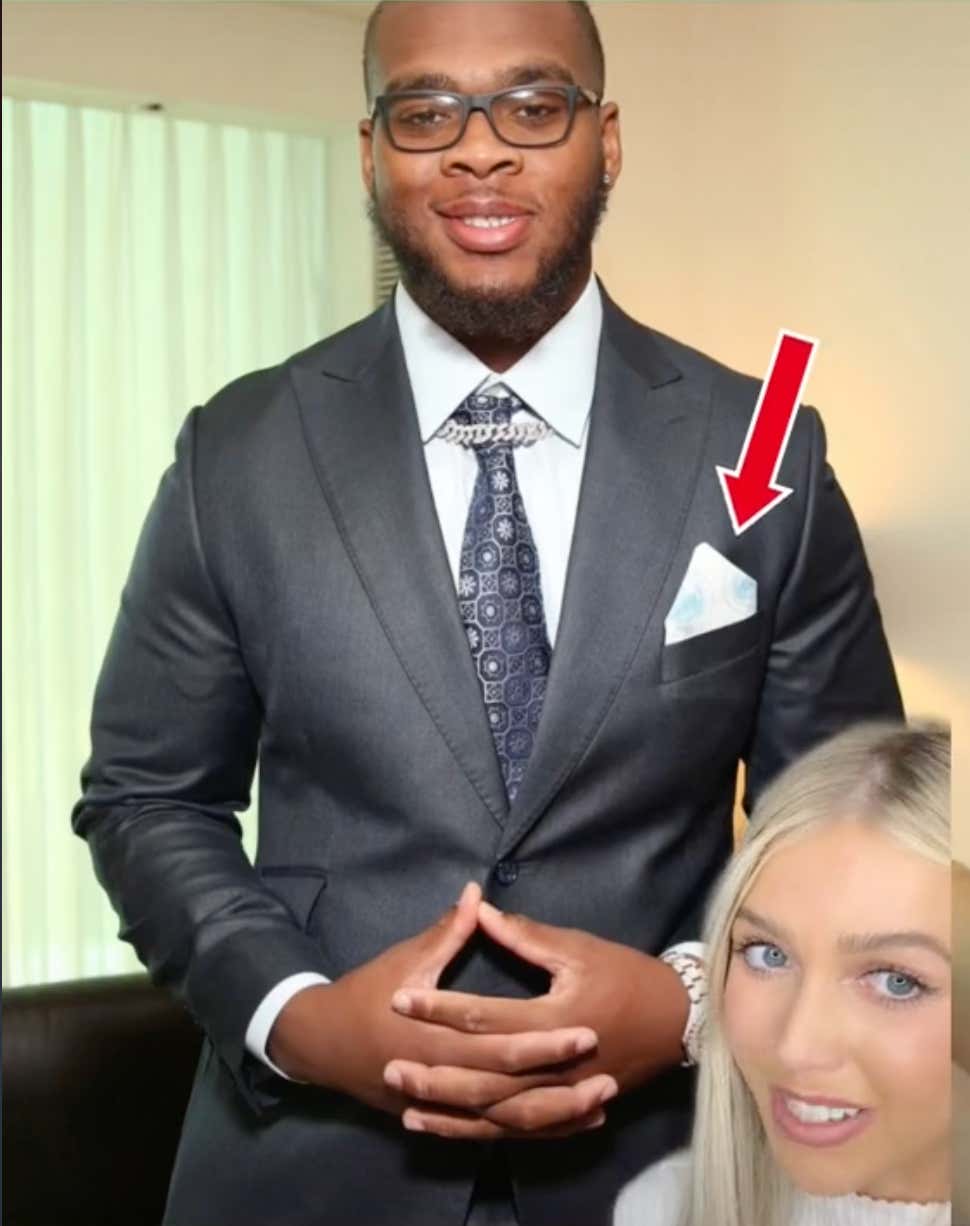 Lastly, Kyle Hamilton wore a suit that at first looked like normal pinstripes, but at a closer glance, you can see these are actually Task Force 141 letters: 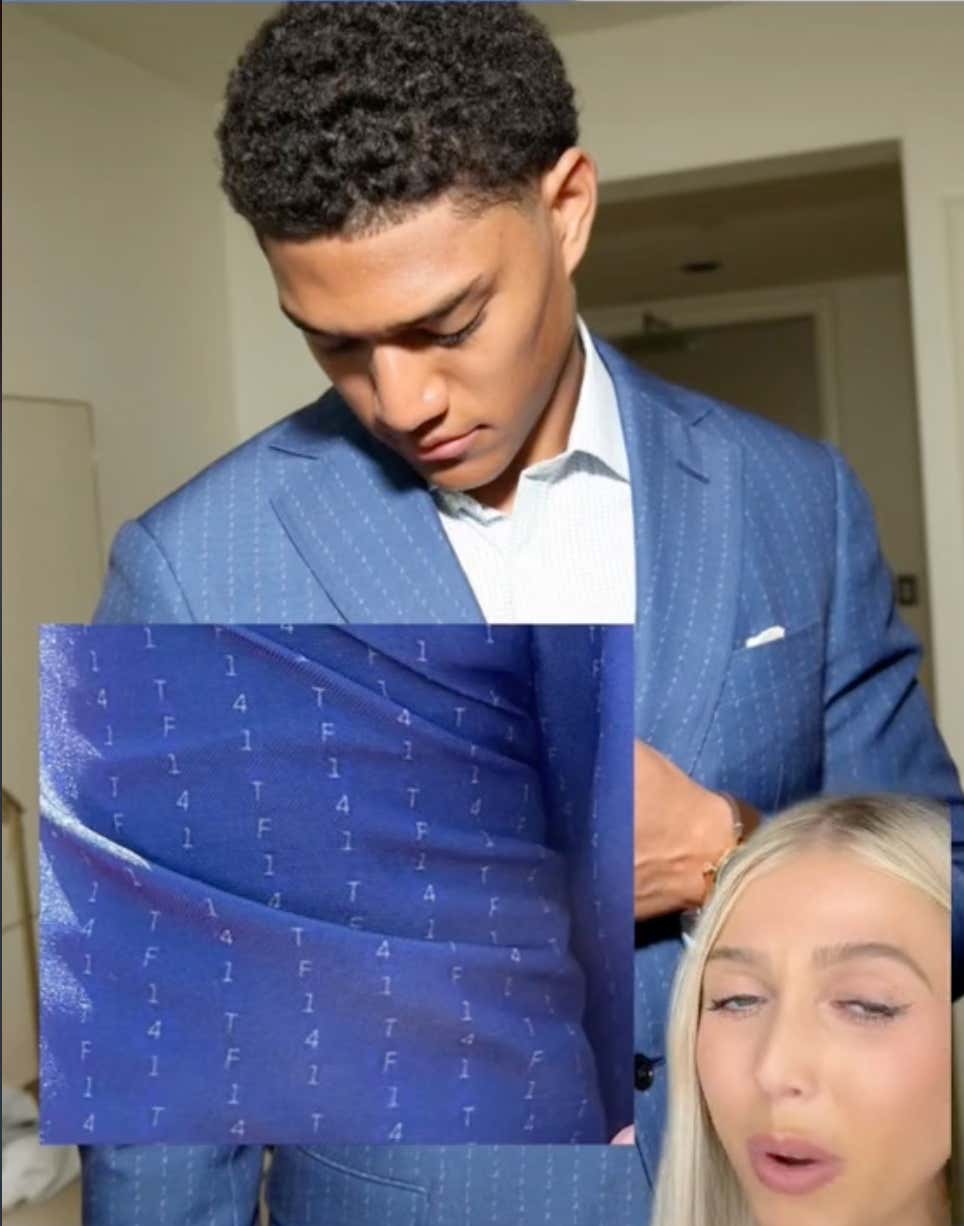 This wasn't the only gaming promotion we saw at the draft, which also featured Dr Disrespect, THE 2-Time, who announced the 49ers 3rd round draft pick:

CLEAN - that’s the only way to describe the MW2 logo. Right away it rights me of CoD 4 or the peak MW2/MW3 days.

That sound…that sound takes me right back to the good ol’ days of Call of Duty. I’m talking squading up with the boys for 6+ hours at a time, trying to see how many Search and Destroy maps you could win in a row. The nights that were filled with playing Michael Myers, Cops and Robbers or Infection.

Activision and Infinity Ward are pulling out all the tricks in the book to try and get us in our feels leading into the next Call of Duty - named Modern Warfare 2.

Just this emblem and teaser trailer above was enough to get the gaming community excited. Since the dawn of time, Call of Duty has done an unbelievable job marketing their latest or upcoming game. That holds true for MW2 as 4 of the top 15 draft picks mentioned above were wearing custom CoD merch.

So Call of Duty developers know what their doing by bringing back nostalgic sounds or making the logo of their game similar to those of previously loved Call of Duty games. But Call of Duty multiplayer hasn’t felt the same for YEARS now.

No matter how badly gamers want that same old school CoD multiplayer feel, we just never seem to get it. There’s a multitude of factors at play, it’s not as simple as Call of Duty losing their touch.  To start off, old fashioned multiplayer games in general are down bad. Think about the flop of Halo Infinite, gamers want more than just queueing into multiplayer lobbies to mindlessly frag out. We need content added into games regularly and we need a reason to keep playing. Gamers are always looking for something more and for a long period of time, prestiging was one way to achieve a higher level of retention. It gave gamers a reason to continue to play and strive for that next level, next prestige, etc.

In today’s Call of Duty, they completely removed it which always felt like a staple in Call of Duty. I don’t think anyone cares about hitting level 1000 each season, but having that Gold Cross in Call of Duty 4 meant something. It showed how committed you were to the game and always served as a flex in lobbies.

Now, bringing back prestiging isn’t going to save Call of Duty. BUT, Call of Duty needs to start adding something into their games to give us a reason to continue to play. Think about FIFA, every single week there’s brand new content added into the game and every single weekend you can compete in FUT Champs to earn solid rewards based on your performance.

Or think about a game like Valorant - it’s extremely straightforward from a playlist standpoint. You either play competitive and play ranked, or you play casual and unranked. There’s really no in between. But the satisfaction you get from watching your rank increase will always keep you coming back. There needs to be some sort of progression in Call of Duty games for them to stay relevant.

Modern Warfare 2 needs to bring something other than a simple Domination, SnD and Kill confirmed playlist.

This is where I'd start:

Gunfight was one of those rare new Call of Duty modes that everyone seemed to love. It was simple, competitive and extremely fast paced. It had everything you needed for a successful game mode.

If you never played gunfight, it was as simple as this: 2v2 (or 3v3) style where every player had the exact same class and the object of the game was to eliminate your opponents. The rounds were extremely quick, about 40 seconds each round, and the first team to win 6 rounds would win.

So it’s as even as a Call of Duty 1v1 could get, all players have all the same weapons and equipment. Whosever able to play angles better with better gun skill, will come out victorious.

On top of that, it couldn’t be easier to run a gunfight tournament. You set matchups, teams queue into a lobby together and boom, you have a tournament. If MW2 brings back gunfight, Gametime will be running tournaments regularly.

Towards the end of MW 2019, they would slowly bring in weekly gunfight tournaments and it was great! Activision hates adding in ranked modes, but a ranked gunfight mode could take MW2 to the next level. However, MW2 needs to be able to have these features ready when the game drops. Too many times Call of Duty will add a ranked mode too late into the game cycle and lose all the initial hype of the game. For example, Vanguard added their ranked mode into the game in February. That’s 3 months after the game was released and in today’s gaming environment, you simply have to be quicker.

Aside from gunfight, I’d love to see a ranked multiplayer mode added within the first month. This would really capture the initial hype and would help promote the CDL significantly. The more competitive in-game support, the more the esports scene could grow. I could write an entire blog on how I’d change the CoD League to try to expand viewership, but I’ll save that for another time.

In today’s current CoD scene, the vast majority of players only play Warzone and I don’t blame them. It’s free, it’s fun (to a degree) and rewards you when you clutch up a dub for your squad. It’s a feeling of accomplishment and a dub will always bring good vibes to the squad you’re with. Hell, it’ll even turn random squadmates into friends real quick.

Modern Warfare 2 needs to be able to incorporate some sort of accomplishment-type feeling into their regular multiplayer playlists. As I mentioned previously, Activision hates ranked playlists because it splits the player base in their eyes. Which is true to a degree, but at this point in CoD’s life cycle, they have to be willing to take chances.

In a perfect world where Ricochet Anti-cheat is 100% effective, I would LOVE to see weekly Search and Destroy tournaments added into the game. Think about how Fortnite does their Cash Cups - it could be a similar model. It doesn’t have to be for anything crazy - could be unique gun skins, a special emblem, CoD points or a badge on your profile.

As you could tell from the day I started working here, Call of Duty is my passion. I absolutely love the franchise and want them to be able to succeed. I really hope they can adapt to the times and give gamers what they’re looking for cause a copy and paste of the same Call of Duty playlists from the past decade isn’t gonna cut it.

If they’re able to add in-game tournaments or competitive modes, it’ll give streamers a way to continue to make content around the game instead of just ranking up guns to use in Warzone and then never play the multiplayer game again.

So I clearly don’t have all the answer or solutions, but I hope you can see my rationale. It’s not just prestiging, it’s not just in-game tournaments, but it’s really about giving gamers a reason to continue to play Call of Duty because without it, the game will continue to remain stagnant.

Anyways, I’m also curious what you all think - tweet me what you’d like to see added into Modern Warfare 2.