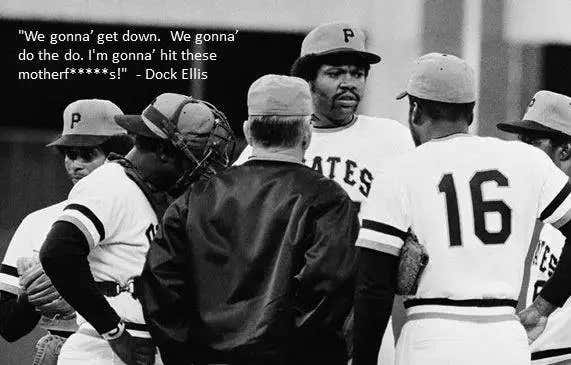 Dock Ellis, the Pittsburgh Pirates hurler who once infamously tossed a No-Hitter while on LSD, has a meltdown facing the rival Cincinnati Reds. Angry about the Reds' swagger, Ellis hit the first three batters in the game, Pete Rose, Joe Morgan, and Dan Driessen. Ellis continued his headhunting against Tony Perez, missing twice, before walking in a run and being removed as the Reds won the game 5-3.

Dock Ellis was born on March 11, 1945, in Los Angeles. A talented pitcher, Ellis was often flighty and enigmatic. Often temperamental, when at the top of his game, Ellis was one of the best pitchers in the game. However, he would rarely have enough focus to keep that edge. In 1970, he infamously threw a No-Hitter against the San Diego Padres hours after taking LSD.

By 1974, the Pittsburgh Pirates and Cincinnati Reds had built an intense rivalry, facing each other in the NLCS in 1970 and 1972, won both years by the Reds. The Pirates, meanwhile, had won the World Series in 1971 as the two teams were the premier teams in the National League in the early part of the decade.

As the 1974 season began, the Reds, managed by Sparky Anderson, were sputtering at 10-9, while the Pirates led by Danny Murtaugh were struggling along at 6-12 as May began. Before making the start, Dock Ellis said he would hit as many Reds as he could before a game at Three Rivers Stadium. Nobody took him seriously, but it was clear he was aiming at Pete Rose when the game started. Joe Morgan followed and also was plunked. Then followed Dan Driessen, setting a record for the most consecutive batters struck by a pitch. As tension rose, Ellis appeared to be aiming at Tony Perez and missed two head-high fastballs before walking in the game's first run. Ellis would not get a chance to drill Johnny Bench, as his manager, Danny Murtaugh, took him out of the game after one pitch to the Reds catcher.

John Morlan took over and did not allow another run to score in the first as Johnny Bench popped up to first, while Ken Griffey hit into an inning-ending double play. In the bottom of the first, the Pirates staged a two-out rally against Cincinnati starter Don Gullet, as Willie Stargell singled home Al Oliver and later scored on an RBI single by Richie Zisk. The Reds would tie the game in the second on an unearned run following an error by Rennie Stennett. The Pirates regained the lead in the third when Stargell doubled home Gene Clines. However, when Morlan ran out of gas in the fifth, the Reds surged back in front, scoring three times as Griffey drove in the tying run; Cesar Geronimo walked with the bases loaded to force the go-ahead run while Bench scored on a sacrifice fly by Terry Crowley. The Pirates, meanwhile, could not answer against the Reds bullpen as Clay Carrol got the win and Pedro Borbon got the save, with Tom Hall retiring one batter in between as Cincinnati won 5-3.