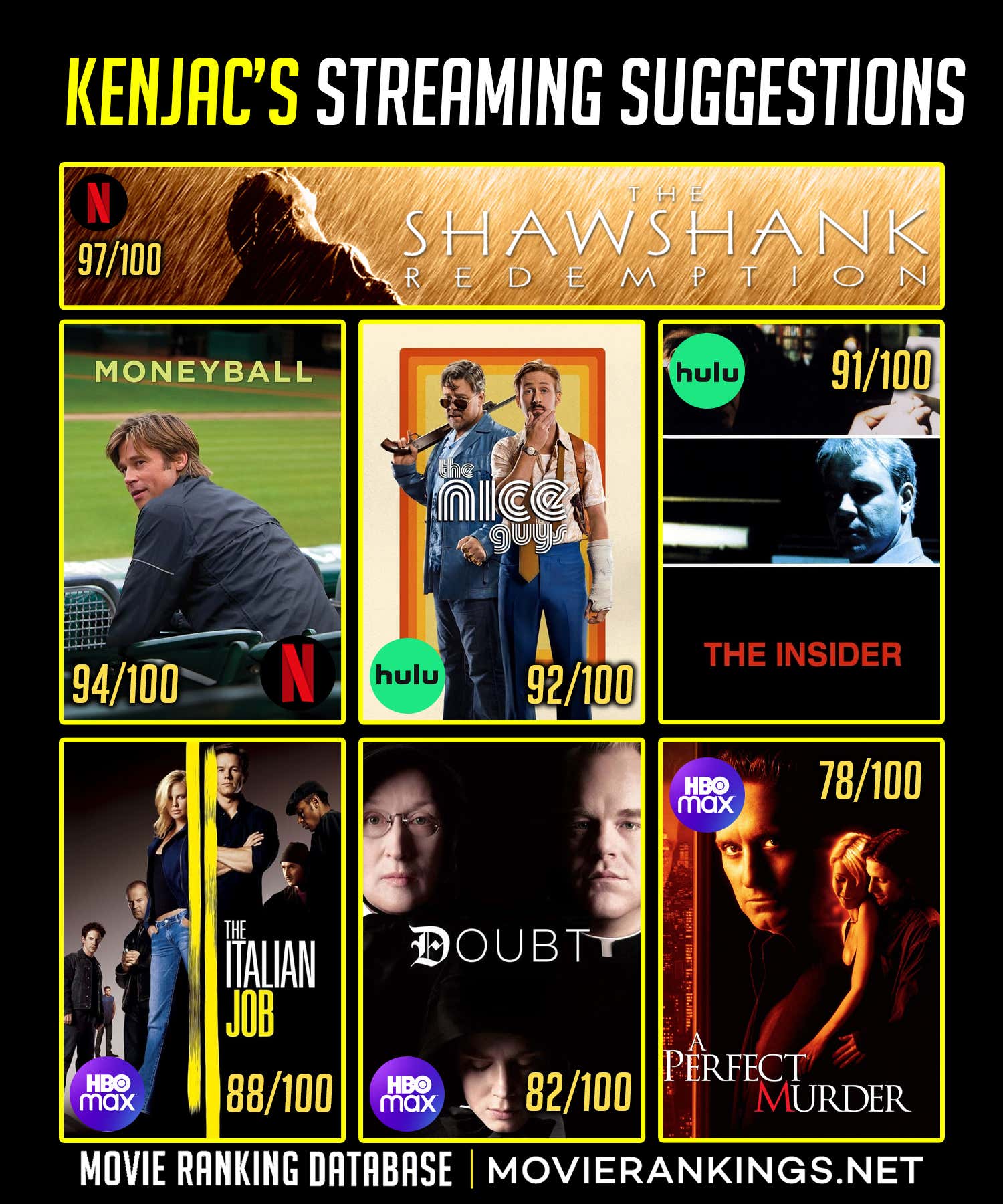 NOTE: I picked all movies that are leaving streaming at some point next month. Make sure to catch them before they go!

Framed in the 1940s for the double murder of his wife and her lover, upstanding banker Andy Dufresne begins a new life at the Shawshank prison, where he puts his accounting skills to work for an amoral warden. During his long stretch in prison, Dufresne comes to be admired by the other inmates -- including an older prisoner named Red -- for his integrity and unquenchable sense of hope.

Every single person reading this has seen this movie. If you just woke up from a coma or something, make sure to check it out.

The story of Oakland Athletics general manager Billy Beane's successful attempt to put together a baseball team on a budget, by employing computer-generated analysis to draft his players.

When Aaron Sorkin isn't writing about politics post-west wing, he can really cut a rug. He and Steven Zaillian put together one of the best sports movies ever and the combination of Pitt. Hill and Seymour Hoffman were incredible.

This movie features such a bizarrely great combination in Gosling and Crowe. Their back and forth is great in the movie, but it really bled on screen from a real friendship. Their press tour moments are very funny.

Tells the true story of a 60 Minutes television series exposé of the tobacco industry, as seen through the eyes of a real tobacco executive, Jeffrey Wigand.

This is a sneaky great Michael Mann movie that I am adamant more people should watch.

Charlie Croker pulled off the crime of a lifetime. The one thing that he didn't plan on was being double-crossed. Along with a drop-dead gorgeous safecracker, Croker and his team take off to re-steal the loot and end up in a pulse-pounding, pedal-to-the-metal chase that careens up, down, above and below the streets of Los Angeles.

Better than the original and one of the all time "Stop-what-I'm-Doing-And-Finish" movies when it came on TV. The cast rock as does BOTH heist scenes.

In 1964, a Catholic school nun questions a priest's ambiguous relationship with a troubled young student, suspecting him of abuse. He denies the charges, and much of the film's quick-fire dialogue tackles themes of religion, morality, and authority.

This movie is anchored by fantastic Philip Seymour Hoffman performance. Not as good as a similar-ish movie in Spotlight, but still quite good.

Wall Street baron Steven Taylor (Michael Douglas) discovers that his pretty young wife, Emily (Gwyneth Paltrow), is cheating on him. But what concerns him more than her infidelity is the hope of profiting from her untimely death. Emily has millions, and Steve's own financial empire is collapsing before his eyes. He hires her lover, David (Viggo Mortensen), to murder her. The plan -- to stage a break-in that will look like a random murder -- turns out to be far from perfect.

It's not a perfect movie, ha, but I really like both Douglas and Viggo in this movie. Paltrow is a dud like usual, but there is a lot to like from this one.

Btw, make sure to check out the last episode of THE BRACKET. Very funny ep featuring Eddie, Feits and Rudy.
movies+ 9 Tags